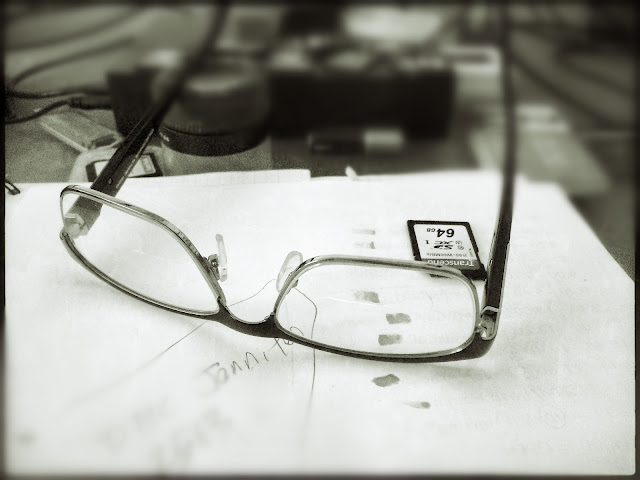 It was a day in October about 20 years ago when the whole idea that my vision might not be perfect reared its ugly head and dashed my hopes of immortality. Up until age 40 my eyes had always been perfect. 20/20. I was the only person in my family who never needed to wear glasses. A nice perk if you've chosen photography as your lifelong (a)vocation.

Here's how my vision smugness got shattered....

The mid-1990's were a heady time for commercial photographers; clients needed us and were willing to pay well for our services. I'd had a nice, long stream of jobs with Austin's Motorola divisions and I decided to reward myself with a cool, new camera (some things never change, right?). Hasselblad had just released their electronic 201F body and it worked with my 110mm f2.0 and 50mm f2.8 Zeiss lenses I'd bought for my older FCW2000 focal plane camera. The 201F had built in spot metering and was a very pricey body, for the time.

The camera was ordered and arrived at Capitol Camera a week or so later. I spent some time getting acquainted with the camera, reading the manual over and over again while testing out every feature. About a week after getting the camera I decided to use it on a location job. We needed to shoot a group of 12 electrical engineers at Motorola's facility on West William Cannon Dr. I decided that this would be the perfect maiden job for the new H-Blad.

I packed up a camera bag with the new body, three lenses (the 100mm f3.5 Planar, in addition to the above mentioned lenses) and some loaded film backs. My assistant and I arrived on location with our cart full of lighting gear and got to work. We set up a canvas background in one of the wide hallways and lit it with two Profoto 600 monolights with umbrellas. We had brought along a bunch of apple boxes so we would elevate a second row of people to make the group shot work better.

I put the new camera on a tripod and chose the (well tested) 100mm f3.5 lens on it. Then I popped up the waist level finder and started to focus on the front row of people. No matter which way I turned the focusing ring I couldn't get the image to show sharply on the focusing screen. It just didn't seem to be critically sharp at any setting. Knowing that the lens was in good working order I was certain something was wrong with the new body. I zone focused and we shot at f16. I knew we were getting sharp images because the Polaroid tests looked nice and sharp. But that finder just didn't ever get critically sharp. Boy was I pissed off. I'd spent north of $5,000 for a body that seemed defective.

I wrote an "aggressive" note to Hasselblad and