Friday Roundup. The week's new about flash, video, the studio and its birds, reckless new purchase, and more... 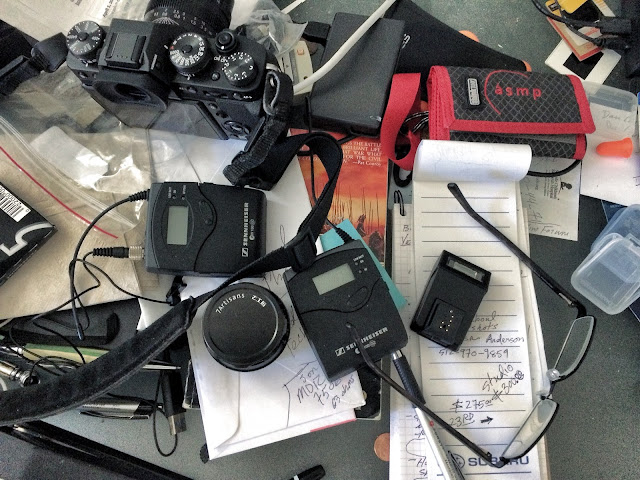 First off, I wanted to let everyone know that the birds are doing fine. I think we have two babies in the nest next to the window air conditioner unit for the studio. They weathered a huge rain and wind storm last week and I was impressed to see that the parent birds constructed their nest in the one spot that didn't get a drop of rain. Pretty damn good location scouting.

We humans, helped by benevolent weather, have been able to resist turning on the air conditioner for now so the fledglings are getting a good, quiet environment in their formative weeks. No guarantees long term. It was 94 here the other day and since I only had clerical work to take care of I was able to decamp and head into the house proper. It's on an entirely different, huge central system and it made sitting at the dining room table messing with accounting on my laptop, durable. 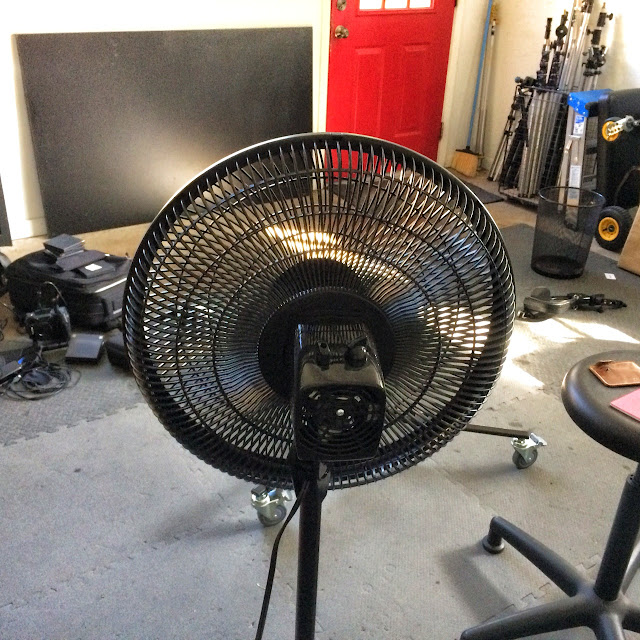 A fan in the service of bird habitat preservation.

While prognosticators across the web are once again bemoaning the imminent decline of the industry I can only agree with them in a very haphazard and partial way; I think people will buy fewer interchangeable lens cameras but I think people will still take photographs (with their phones, etc.) and still enjoy looking at photos. Collecting them? Not so much. But enjoying photographs in the same way one consumes and enjoys a nice glass of wine? Absolutely. One piece of entertainment at a time.

I think the change-elephant in the room is that people are quickly replacing the written word with images that tell the story. Photography is now a pure language instead of a field that specialized in collecting quasi-handmade iconic items. We see stuff and then move on. We no longer are each responsible for store housing everything that flashes past our eyes as a piece of paper in some ersatz vault or chintzy frame.

It's been a quietly productive week. Taxes all taken care of and paid. Jobs from last week delivered and jobs this week already spirited off into the corporate sharing cloud.

I had a fun run to my bricks and mortar camera store on Wednesday. I needed to replace a boom arm that was lost to a bad lend. I felt that the Kupo Baby Boom was just right. It was $99. I bought it and tested it on top of my extra tall C-Stand and it's just what the photo doctor ordered. While I was there I also picked up a long roll of black seamless paper. 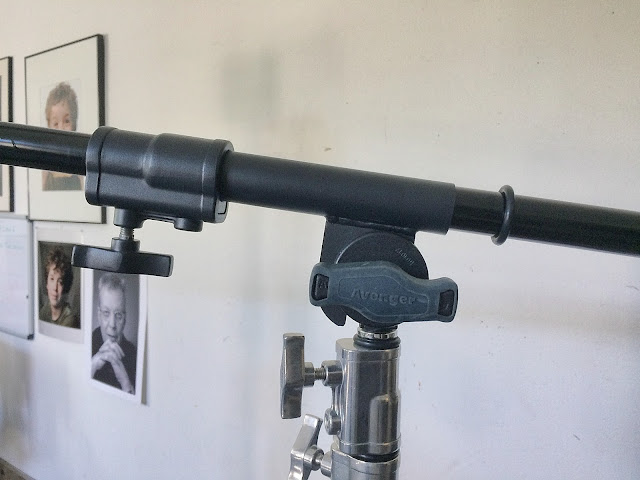 Here's the boom arm. It works in conjunction with a clamp head.

Neither the boom arm nor the black seamless paper were impulse purchases; I need them both for a photography assignment I'm doing on Tuesday. I'd explain it but it would take too long. Suffice it to say that I need to shoot a tight scene on a seamless background that goes up about 12 feet in the air and that I need to hang a mono-light with a soft box up about 14 feet in the air. The fee plus expenses amply covers the newest expenditures. And that's lucky because I've needed a new boom arm for a while.... 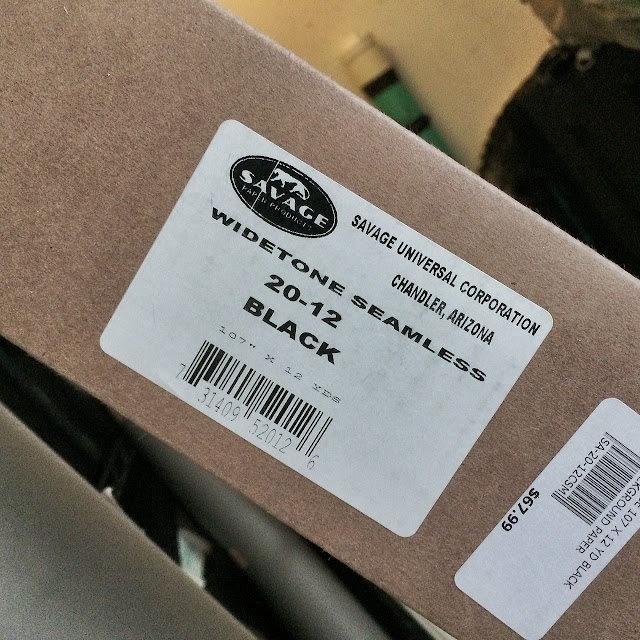 Saying a prayer of gratitude that we still have a full service camera store in Austin.
Replacement rolls of seamless are a quick (depending on traffic) jaunt up the Mopac Expressway.
And there's always cool stuff to ogle on the used shelf.... 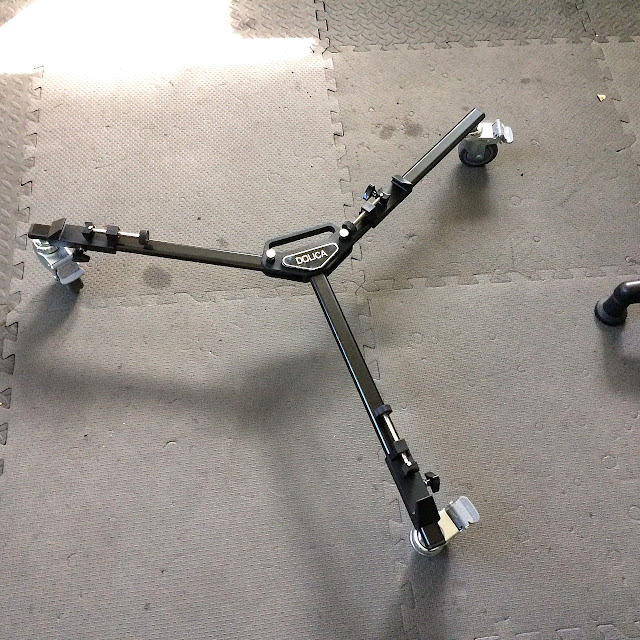 Another recent purchase was this tripod dolly. Why a tripod dolly? Well, you may or may not believe this but sometimes moving shots are popular in video. Everyone has rushed out to buy cheap gimbals which promise wonderful smoothness, etc. But I find that electronically controlled gimbals require lots and lots and lots of real practice and that few people become proficient using them until they've logged about six months of good use. You also really need to use lightweight cameras and lenses and you can't be tethered to stuff like monitors.

But if you have a smooth floor (or you buy a couple of 4x8 foot furniture finish pieces of plywood) you can get a very controlled and repeatable set of camera moves with one of these under $100 devices. Just attach your tripod, rehearse your moves and try it. The advantages of doing your moves in this old school fashion are: 1. the initial cost savings. 2. the very, very stable base with translates into less up and down wobble. 3. the ability to use any camera and lens combo you want without penalty. 4. Your arm doesn't get tired after doing the camera moves for two minutes. 5. You can use your external monitor and your microphone junction box without penalty. 6. the dolly never needs batteries. 7. it works with any tripod.
and, 8. When you are not using it for camera moves you can just use it to hold up your camera.....
Yeah. $60? Maybe... 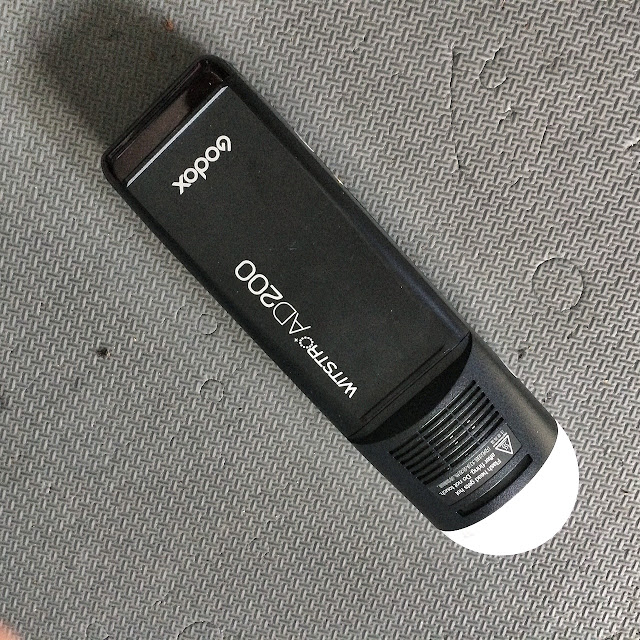 the reason Profoto and Broncolor will probably exit all but the highest end of the
electronic flash markets. Field tested (one destroyed in 2018 from a ten foot fall onto hard ground; still useable to the end of the assignment!!!).

I've been buying Godox flash units for a while now and I think about 95% of the people in the market for all kinds of flashes have been doing the same. I've found them to be at least as reliable as the name brands (especially where shoe mount units are concerned) and much less expensive. I love the shoe mount models that come with big, lithium ion batteries in them. They flash forever; at least through a full day of heavy shooting. The remotes work without confusing the hell out of me, and my friends who use their big, plug in the wall, monolights are mostly extremely happy with the price-to-performance ratio and overall availability.

We are now at the point where purchasers of expensive flashes such as Profoto are in the same league as Leica buyers. They want the best and are willing to pay for the privilege of the badge. If I owned a big catalog studio I might outfit it with their pack and head systems because of the reputed reliability and consistency but I think it's a bit like comparing which 50mm lens at f5.6 is the best. They are all good.
They get the job done. And you'll have to forgive me if I'm not anxious to rush out and drop $10K on a Leica 50mm to get that extra .02% of image quality over my Fuji or Nikon or Canon lens.

At any rate, I was an early buyer of the Godox AD200, about two years ago, and I used it frequently for location portraiture; especially on those jaunts off road that meant long hikes to a location, or those times when I was packing for multiple plane flights on regional commuter jets. These things pack down small in a way that an A/C powered unit just can't.

The AD 200 is small, recycles fast, provides enough power (in  HSS) to fence with sunlight and is usable with the Godox X-Pro triggers. I have one of the remotes for the Fuji cameras and it gives me control over flash levels at the camera location as well as providing high speed sync. So, how much do I like these tiny 200 watt units? Well, when I destroyed my first one I didn't wait until I got back home to replace it, I dialed up the Amazon account from the road to make sure the replacement would be at home waiting for me, by the front door, right next to Studio Dog.

When I read recently that they were making a new head for the unit I was enticed. They have interchangeable heads/flashtubes. The units come with a conventional looking head like the ones on a shoe mount flash, and also a bare bulb head because that's what the really cool photographers want (works very well in a soft box). The newest head, which just clicks right on, is a round head with a built in front diffuser.

Around the edges of the front diffuser is a metal ring, the purpose of which is the attachment of accessories for the flash. It looked good to me so I splashed out the $79 for the new head and added in another $50 for the additional accessory kit.

First thing I did on delivery was put the dome attachment on the front of the round flash head. It snapped on perfectly and is held in place with magnets. I put the assemblage in a soft box and tested it. Nice, nice, nice and even. Then I looked through the other accessories.

There is a lovely set of nested front of the flash accessories including, a four way barn doors, a fresnel diffuser, a filter holder and a grid spot. All seem well made and useful. There is a collapsible silicon rubber snoot the fits on the front. And there is a small collection of hard filters that are well chosen (more fine-tuning than theatrical).

They are the most fun accessories I've gotten for a flash that I can remember. Now I'm thinking that I need one more AD200 and that two of these would make a wonderful, flexible and brilliant location lighting kit.

Yeah. I'm not sure I'd trade this stuff for one of Profoto's new $1100 shoe mount flashes. In fact, I know I wouldn't and that is Profoto's marketing problem to solve. Good luck to them. 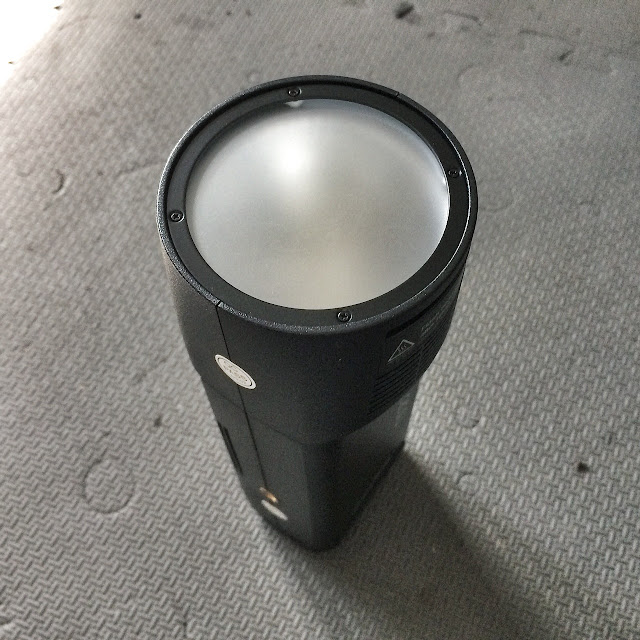 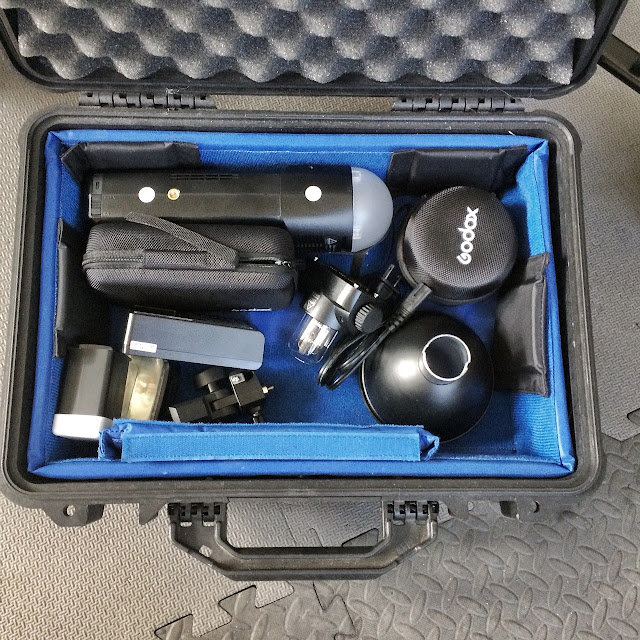 A small Pelican case with a bunch of lighting accessories and a cool light.

Business is happily steady and as I get older I'm getting faster and faster on assignments. Why? Because I've done most similar assignments so many times that the guess work is mostly gone. We are letting our subconscious do the set ups and then my brain steps in for the interface with subjects and clients. It's so efficient it leaves me more time to swim and to wonder why people think all this work stuff has to be so hard.

One thing I read this week that struck me as really funny, until I realized that the same sentiments might be true for commercial photographers.... It was a quote about the evolution of the advertising industry. It was in a great book entitled, "Squeeze this Mr. Whipple."

Here's the quote: "In the future advertising will become like sex. Only losers will pay for it."

Seems that this sentiment is the real, underlying promise of the web......

Posted by Kirk, Photographer/Writer at 17:30 No comments: