It was somber and rainy yesterday. What a perfect time to go outside (yes, yes, taking all precautions and obeying all the rules!!!) to photograph with a nearly forgotten 20mm f1.4. 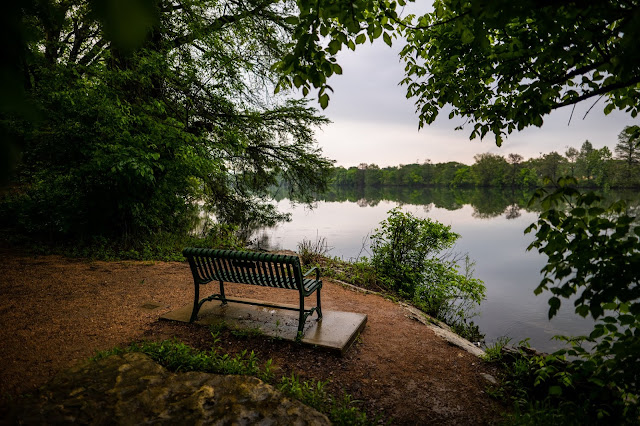 The whole of yesterday was boxed in by rain and mist. I drove to Dripping Springs with the wipers beating time to NPR and fresh coffee in the cup holder. I walked with my friend in a friendly, peppery rain shower, along with his kind dog who was just thrilled to be invited along. When I got back to Austin it was still raining and gray (although looking out the window just now is like watching a sunny scene from a Disney cartoon) and by the end of the "work" day I was ready to get out again; stretch my legs; play with a whimsical camera and lens.

Sometimes I feel that certain lenses are like neglected children. The bright and vivacious ones get all the attention while the ones that are hard to handle get the perfunctory nod and just enough support and affection to keep them well. The 20mm focal length is perennially one of my "neglected children" mostly because I don't know how to handle it well. It seems like such a specialty focal length in the scheme of lenses.

Last year when I was buying into the Lumix S1 system I greedily bought all my favorite lenses. I'm so well stocked for medium and short telephoto lenses. My zooms range from 24mm up. But...I remember a fair number of times over my career as an image maker for profit when I needed a little bit wider lens to get impromptu interiors or dynamic wide shots. Or those times when I just could not back up one more step without accidentally trashing someone's million dollar lab, or plunging off the edge of a high roof. I seem to have always grudgingly included a 20 or 21mm focal length lens in my bag and more often than not it's the lens that actually pays off the quickest....at least in terms of expanding opportunities.

So when it came time to commit to the new system I picked up an interesting 20mm; it's the Sigma 20mm Art Lens and the crazy thing about it is the f1.4 max aperture. Every 20mm I've owned from other makers thus far has been limited to f2.8 or even f4.0. The trade off, of course, is that the Sigma Art 20mm is enormous and heavy. I guess you just can't have it both ways.

I bought the 20mm lens assuming it would only come along with me on commercial assignments and would not be a frequent companion on long walks on hot and dusty trails or in soggy, chilly weather. All business and no self indulgent artwork. So in a fit of contrarianism that's exactly the lens I reached for yesterday. A big, fat, heavy lens with no promise of weather proofing or water resistance. The perfect choice for a mindful walk in the early evening rain... 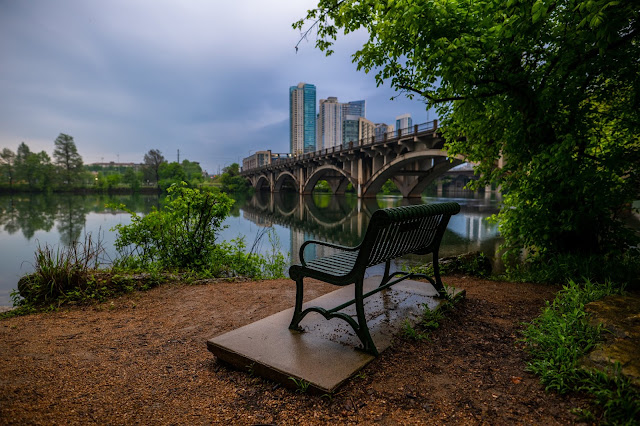 In defense of my battered intellect the rain had stopped when I left my office. But by the time I reached the psychological point of no turning back it started up again with a mix of big, random, splashy drops and a non-stop, near mist of smaller, more consistent droplets.

I parked by the Theatre and started walking towards downtown. The rain was like a musical piece that ebbed and flowed. Now harder, now softer, now a break altogether and then back again. I had the lens attached to an S1 and I didn't have much fear for the S1 but I was a bit nervous about water+lens. I took off my faded and battered black baseball cap and used it to cover the whole assemblage from the rain, pulling up the hood on my rain jacket to pick up the slack. The cap did a good job diffusing the water into the fabric and creating a barrier from the more aggressive rain.

Downtown was barren and still. Nearly bereft of humanity except for a tiny fleet of cars waiting to pick up and deliver to-go orders from restaurants. These would be the drivers for Favor and Door Dash who are trying to make ends meet as the mobile intersections between customers and what remains of the restaurant industry...

Nothing to see in the grid of tall buildings and empty sidewalks...

When I bought the lens I had the idea that the fast, 1.4 aperture was just there as an exercise in one-upmanship by Sigma. Not really usable and probably soft and blurry, especially in the corners. But that's not at all the case; in fact most of the images I shot were done at f1.4, 1.6 and f2.0. Every once in a while I'd want more in focus and I'd revert to previous wide lens experiences and stop down to f5.6 or even f8.0.  But when I started looking at the images I'd shot while I was post processing I was impressed at just how sharp and contrasty the lens was at f1.4.

The Sigma 20mm Art is not perfect. You can see that if you are shooting in Raw and processing in Lightroom. The lens profile isn't automatically selected in that case; it's up to the user to enable it in the software. And because of this you can see just how much distortion and vignetting is going on "under the hood."

But once you click on the profile everything tightens up and brightens up.

And that brings up an interesting (to me) topic: Just how perfect do I want my lens to be?

While I was shooting part of the allure in what I was seeing was exactly the wonderful corner and edge vignetting and distortions which seems to add some excitement and drama to a lot of the images. Clicking on the "perfecting" button felt like I was taking some of what caught my eye in the moment of  taking out of the picture. The rush to perfection somewhat crippling the wonder I saw in the moment. So I stopped automatically clicking the lens profile button each time I started working with a file. I like most the images better that way. Completely raw, raw.

If I was shooting interior architecture for a client I'd be exhilarated at just how well the profile corrections work but, for myself, I'm just not so interested in a "perfect image." YNMV (your neuroticism might vary).

In the end I felt like I got some images over the space of my hour and a half of walking around (very few other people were out on the trail in the rain ---- a sighting every ten minutes or so) and I'm actually surprised at how much I enjoyed using the 20mm focal length. I may even do it again. But not today. That would be too soon... 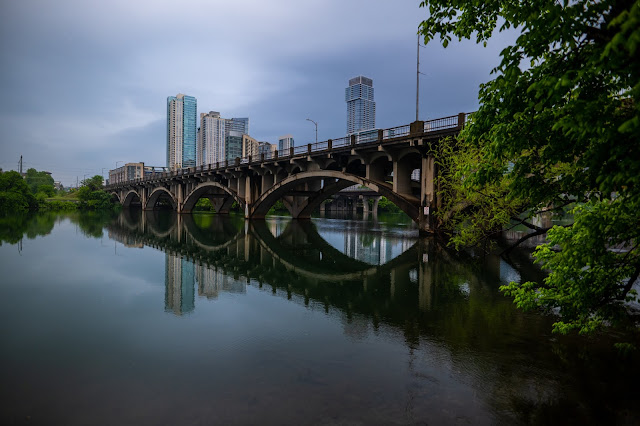 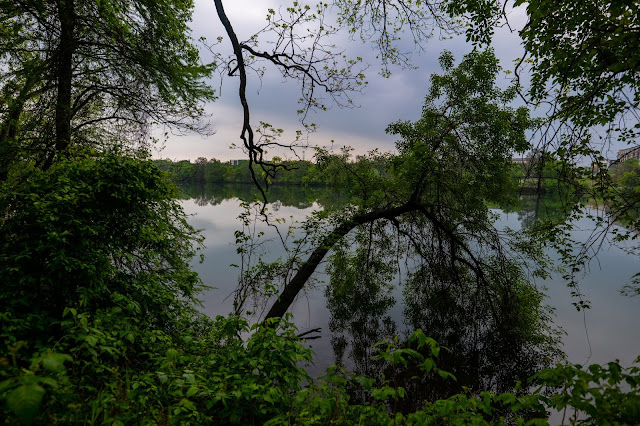 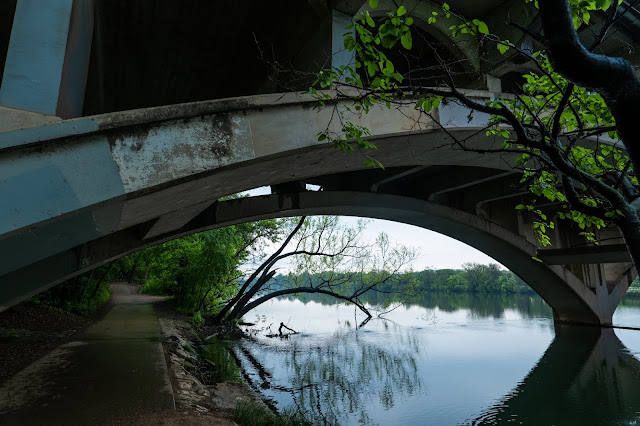 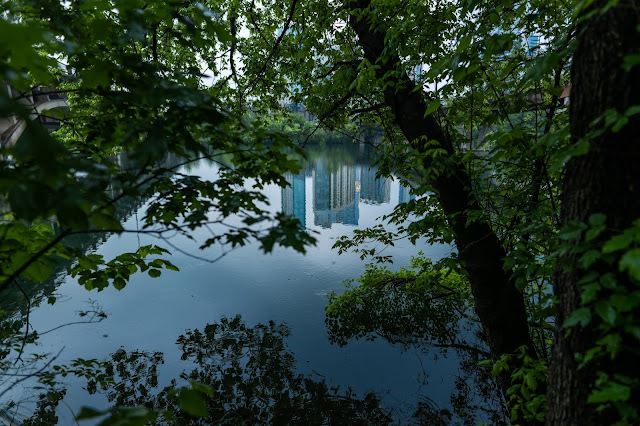 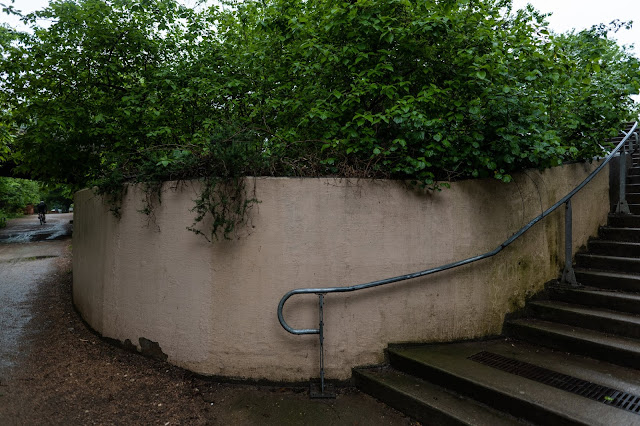 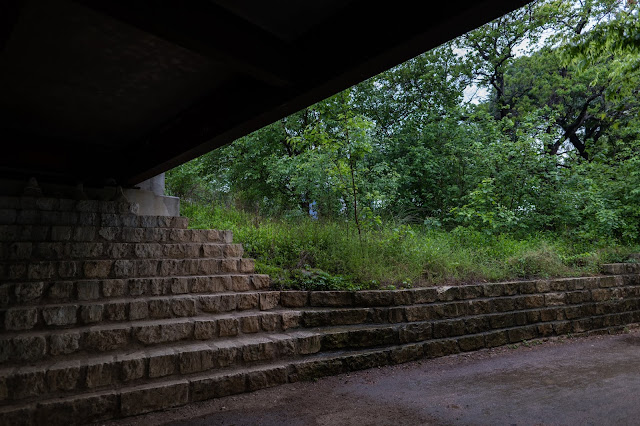 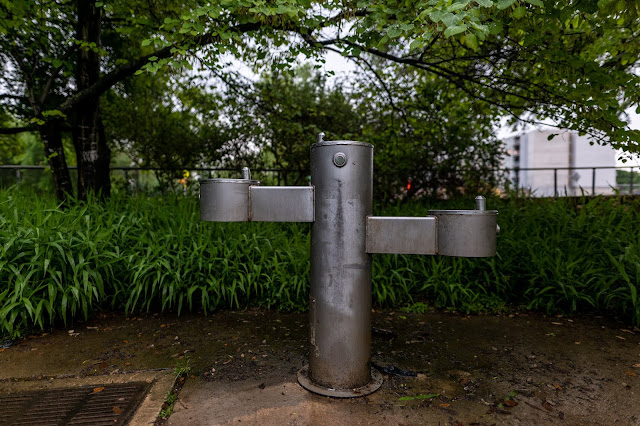 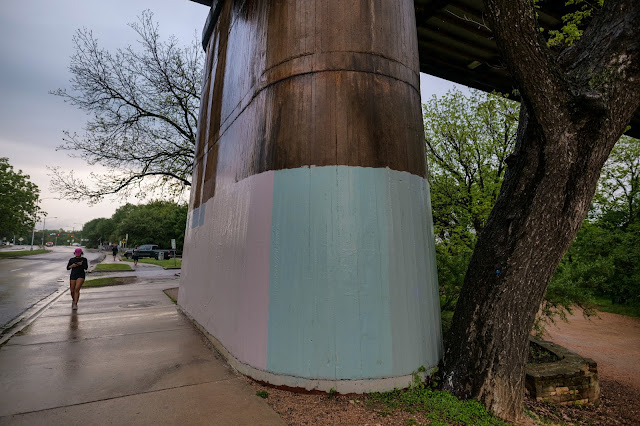 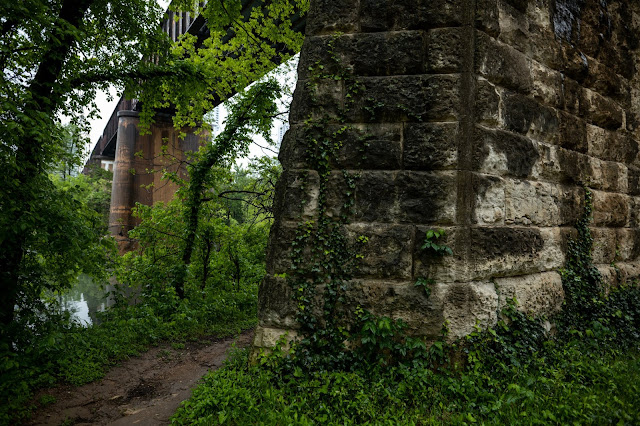 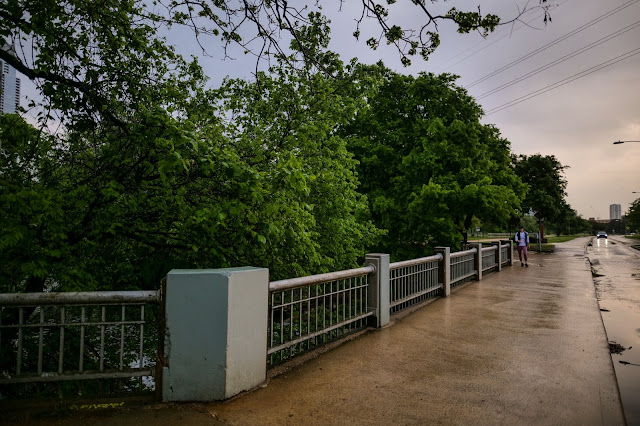 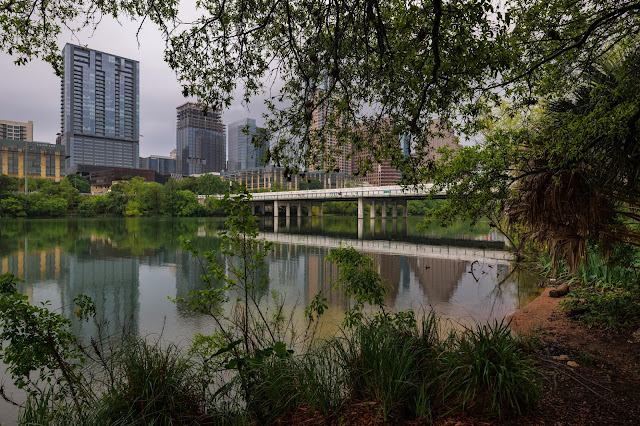 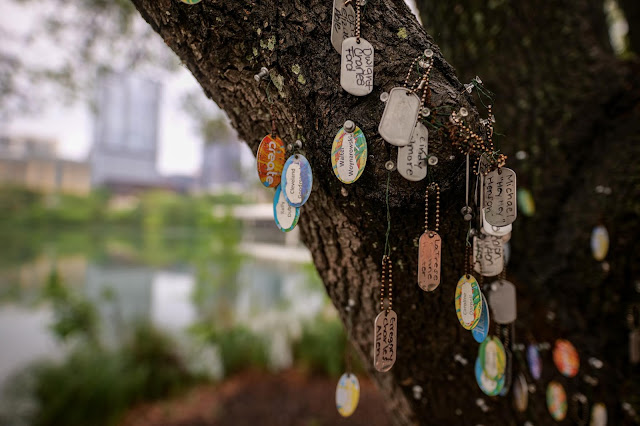 This image, and the one below it, is part of a memorial to homeless
people who have passed away in Austin. It's adjacent to the First St. Bridge and
the south side of the Hike and Bike trail. 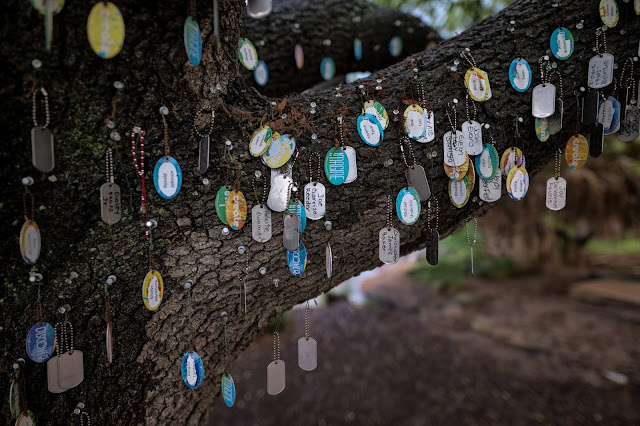 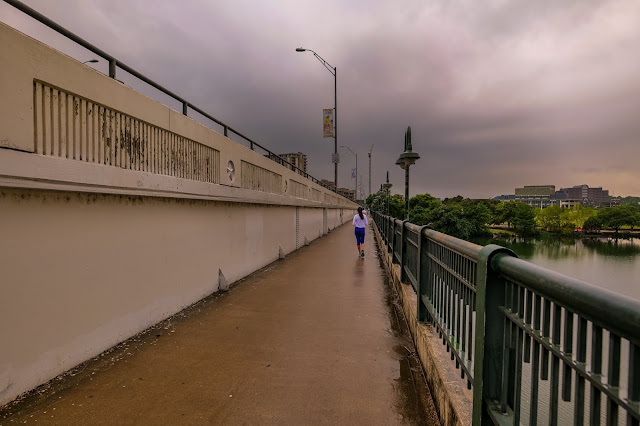 How many years I've run this bridge in blazing heat and freezing cold...
Today it was just cool and mellow. And wet. 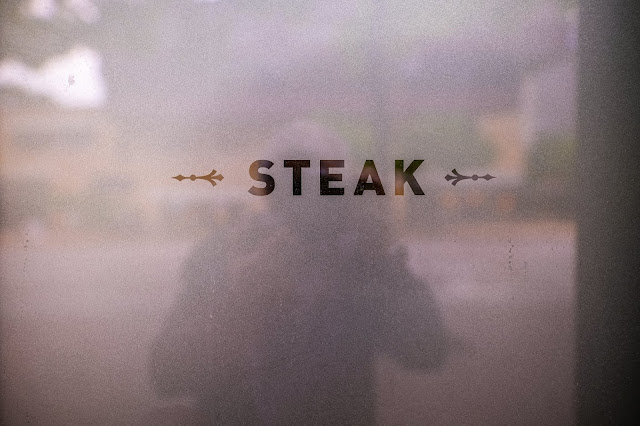 Unfulfilled promises in the frosted windows at Lambert's Restaurant in Downtown.
It looks like they tried the "to-go" strategy for a while and then ultimately
gave up and closed the doors for now... 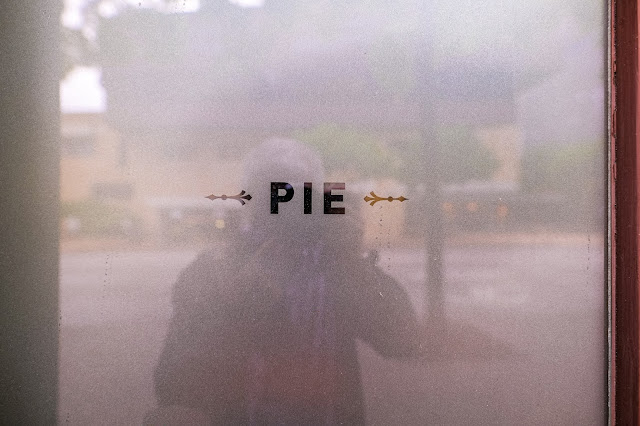 But damn. Why did they have to advertise pie? It would have been just right, in that moment... 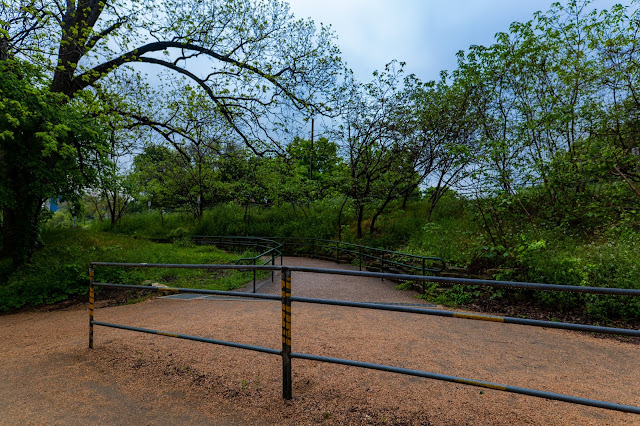 This is where my path on the trail ends. It's just north
of the Zach Theatre complex. It's sad to walk by the dark and empty
buildings. "This too shall pass" they say. I hope it's soon
enough that we don't lose the potential of a generation...