Yesterday I wrote about a Sigma lens; today we've got something totally different: The Meike 25mm T2.2 Cine lens. WHAT?? 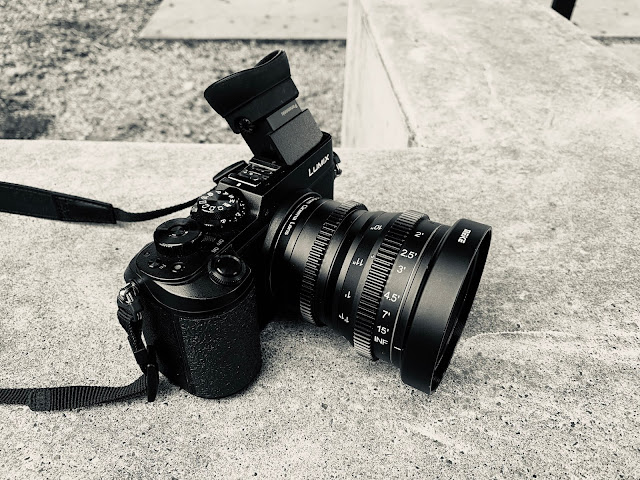 A used Meike 25mm cinema lens on a Panasonic GX8.
On a wall in front of Zach Theatre.

Sometimes lens bargains come in pairs. I left the house Sunday with the intention of picking up this Meike cinema lens that I saw on the used shelf at the camera store and the Sigma 16mm f1.4 lens just seemed to follow us home like a lost puppy. That's okay. We've got lots of room here...

Do you remember a few years back when a company called "Veydra" made a small splash in the hybrid production market (video+photo gear) with a line of cinema lenses that were intended for APS-C, and smaller sensor cameras? They got some good press and everyone I know who bought one, or two, or the full set had nothing but good things to say about them. The only hesitation people had in buying them was the fact that they didn't cover a full 35mm sensor format at a time when people were single-mindedly pursuing full frame. They are also only available for mirrorless cameras. Like the m4:3.

The lenses were actually designed for film and video and were not just re-badged and re-mounted still photography lenses like most of the inexpensive Rokinon Cine lens line. The Veydras were more complex optical designs which used industry standard gearing for focus follow equipment, were optically computed to minimze focus breathing, and were capable of focusing nice and close. The de-clicked aperture rings were smooth as butter and the focusing ring (manual only) had a nice big throw of 270 degrees which made for smoother and more accurate focus pulling in video. I was interested in trying the Veydras out but could never justify splashing out the cash for a new one; especially since I usually find myself drowning in a sea of other lenses around here.

The Veydra line is no longer at B&H and when you search for it on Amazon.com the website takes you directly to the Meike line of cinema lenses which look to be identical (except for logos and graphics). It looks like Meike and Veydra either shared a common supplier or that Meike was the OEM for Veydra. Now that Veydra stuff has disappeared from retail channels it seems that Meike is offering largely the same line of lenses at about half the price.

When I found a used copy of the Meike 25mm T2.2 at Precision Camera here in Austin I negotiated a nice, low price ($269) and whisked it off their shelves and into my camera bag (metaphorically).

Right off the bat I'll say that it's the worst sports and follow small children as they run around the yard lens that you'll even use. Why? Because it's fully manual, there's no electronic correspondence with your camera, there are no click stops for aperture, and the incredibly wide/long throw of the focus ring would make quick focusing for sports a stand up comic's new material...if audiences knew anything about focus ring throw.

But, for a careful photographic worker who makes photographs of things that don't move much, like people, art, street scenes, buildings, signage, landscapes and well rehearsed film making, the lens makes a lot of sense and delivers really nice results. The optical formula includes ten elements in eight groups and is nicely corrected and sharp even at its widest aperture and closest focusing distance of 9.8 inches.

There is a filter ring at the front of the lens and it takes a 77mm filter. Nice for me since I just bought a set of individual ND filters, extra polarizing filters and a variable ND for the Panasonic 24-105mm f4.0 lens for the S1 system. It also takes a 77mm filter. The Meike lens I bought is made for the m4:3 lens mount but it's available in most of the mirrorless mounts and covers up to an APS-C format sensor.

The lens seems to be very well made and is dense and all metal. The rings all turn wonderfully and are well damped. I'm happy to add this lens to my collection and anticipate getting much use from it, in conjunction with the Panasonic G9, for making fun, personal video movies. Even though I keep attempting to love all things wider angle my vision seems irrevocably stuck at a 50mm equivalent so in buying this lens I convinced myself that I continue leaning into my strengths.

I must say that when it comes to film making I'm out of sync with current styles. Most of my director and camera op friends are hell bent on figuring out how to keep the camera constantly moving. It's either on a slider or mounted on a gimbal and the camera is flying all over the place. I like stationary cameras that follow the action from their anchor point on a nice tripod.

I think the movie that made the biggest technical impression on me in the last 20 years was Jim Jarmusch's little movie, "Stranger than Paradise." He set up a stationary camera and the scenes unfolded in front of it. When the scene is done the camera cuts and moves to the next set. It doesn't move during most of the scenes. I like it. It's a less confusing and kinetic way of telling a story. We'll see how my vision evolves when impacted by reality.

Which is a nice side point to make right now. All the projects I'm working on a have an initial audience of one. That's me. I don't have the responsibility of "bending" my way of seeing to accommodate the different viewpoint of a client. I guess that's good and bad. Since I'm not currently motivated to move quickly on anything.

At any rate I used this lens on a Panasonic GX8 today to make images so you can see the way the lens handles stuff for yourself. The GX8 doesn't make as pretty Jpeg files as the G9 but when I shoot in raw it really doesn't matter. So I did. Enjoy.

By the way...I'm loving that articulating EVF. It's wonderful. 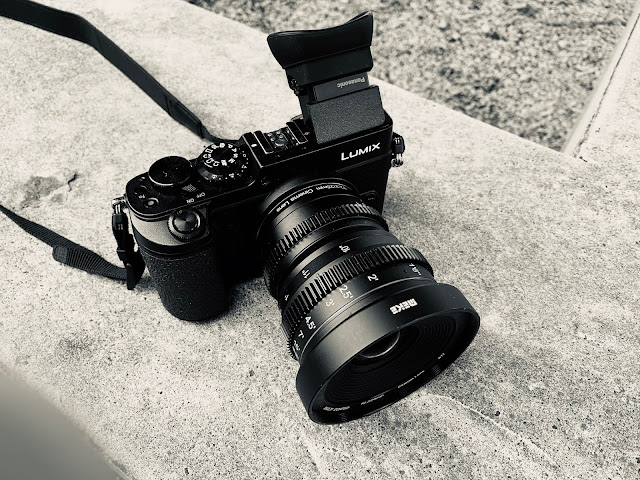 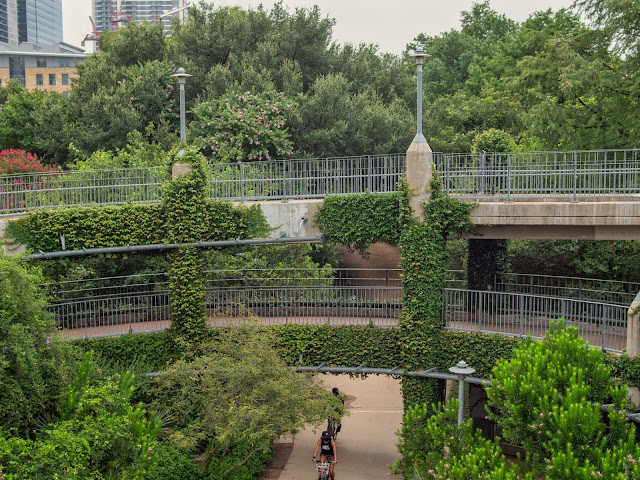 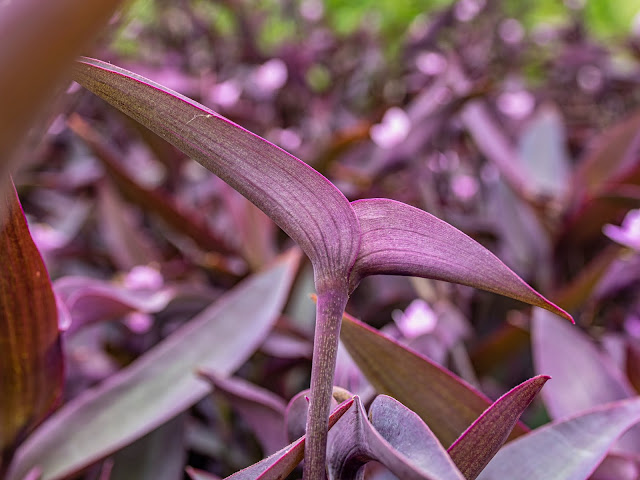 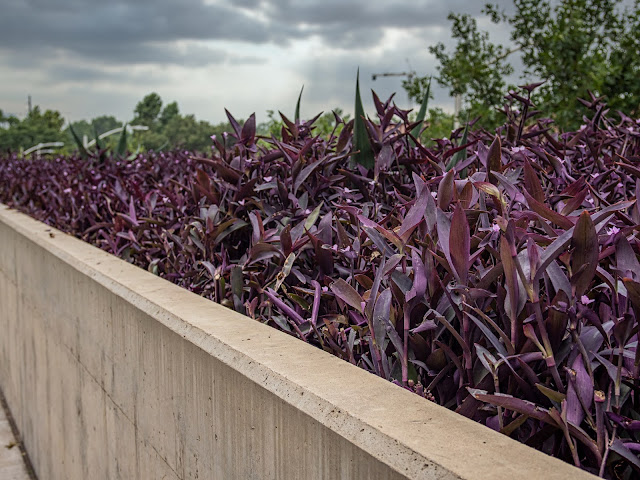 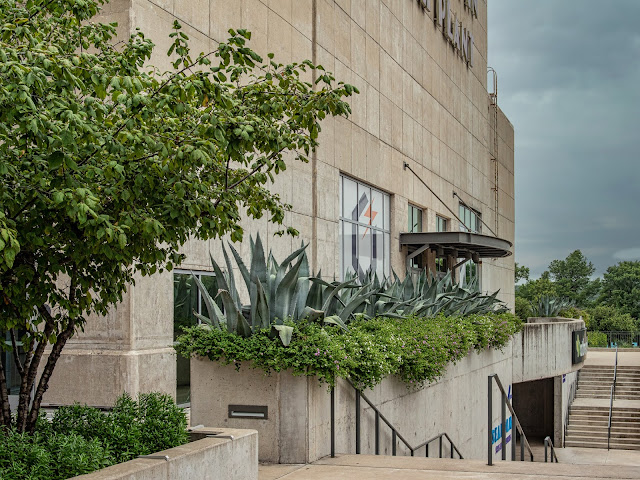 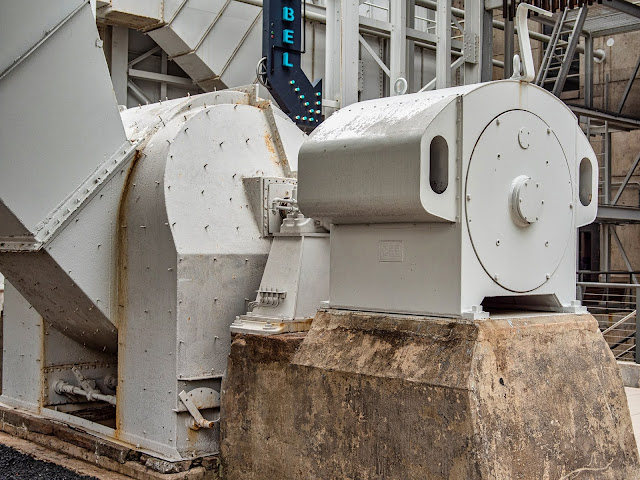 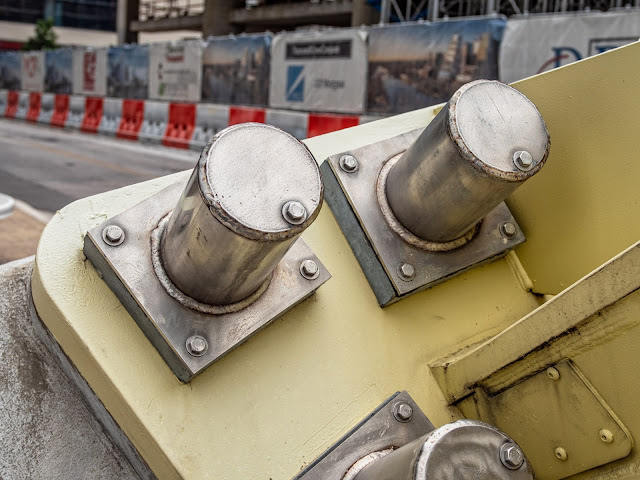 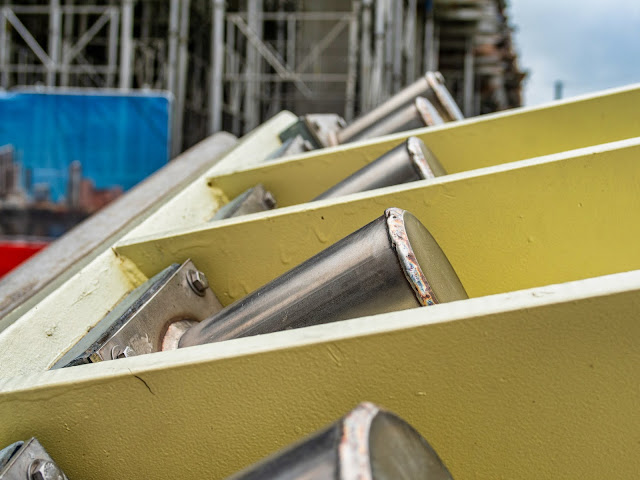 Focused on the second stud from the bottom. At f5.6. Very sharp! 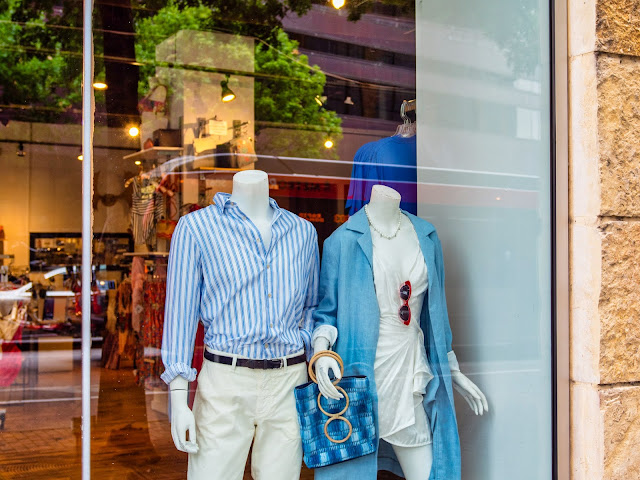 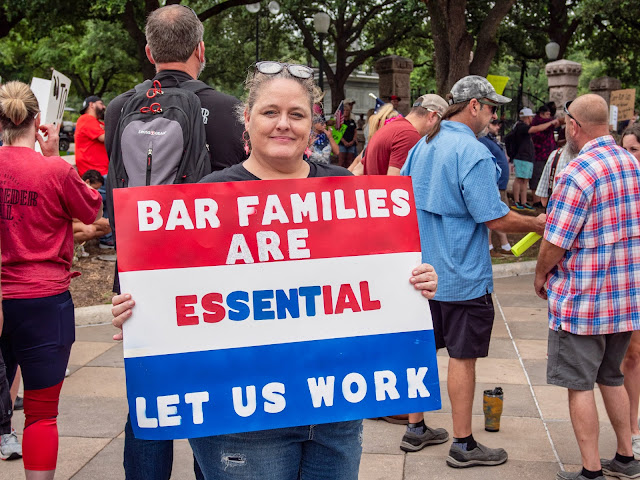 These images are from a protest at the state capitol. Attended by 50 or 60 people.
They are protesting the re-closing of bars and clubs in Austin. They think the
government has "over-reached." I nodded as I listened and laughed and then cried
all the way back to my car. Still trying to wrap my head around serving
people alcohol in a Sixth St. bar as an essential service.

But the group was very peaceful and very polite. I appreciated that. 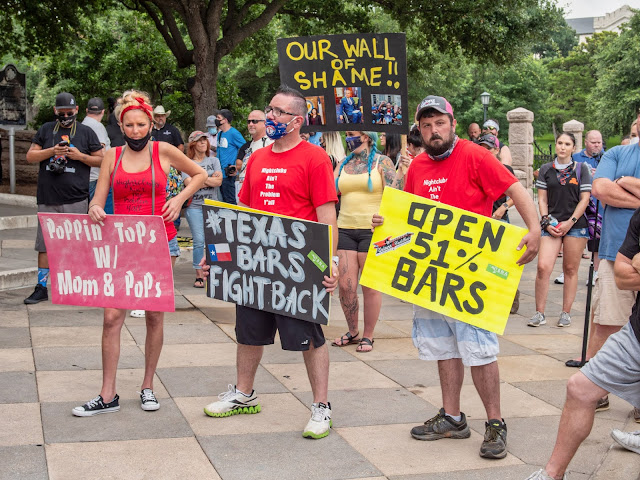 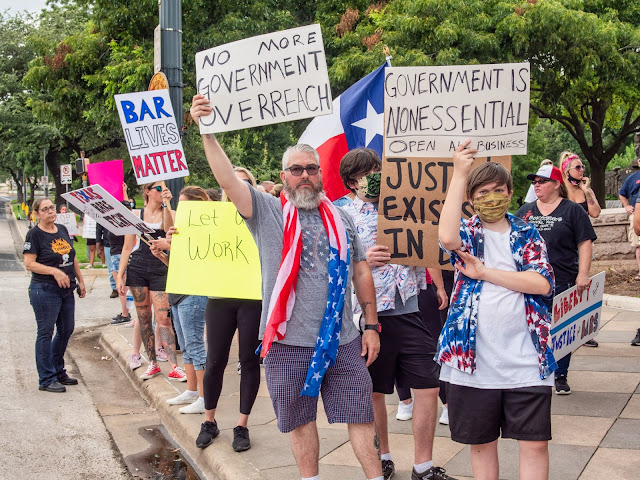 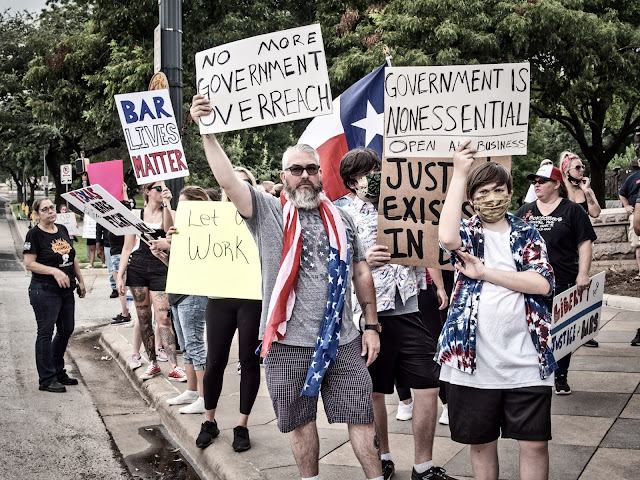 Souped up with a different look from Luminar 4.0 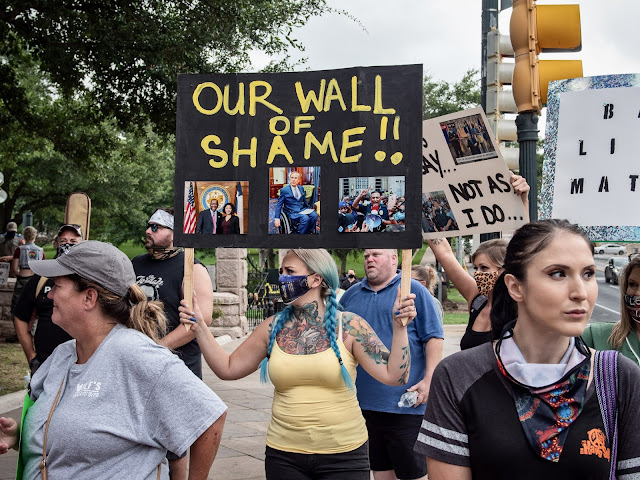 I do have to agree that our governor, Greg Abbott, is not a good steward for the state. 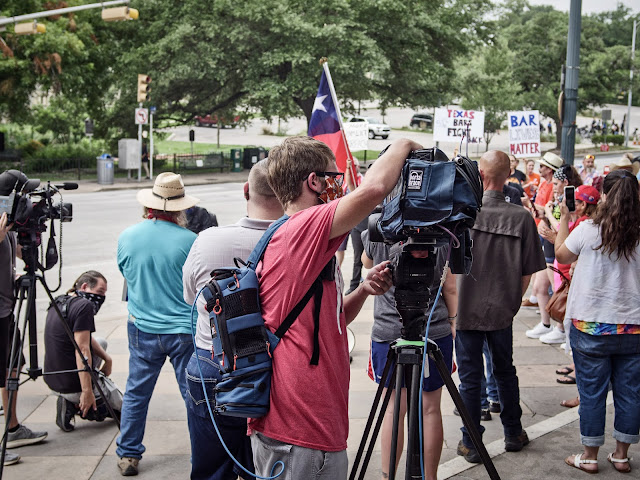 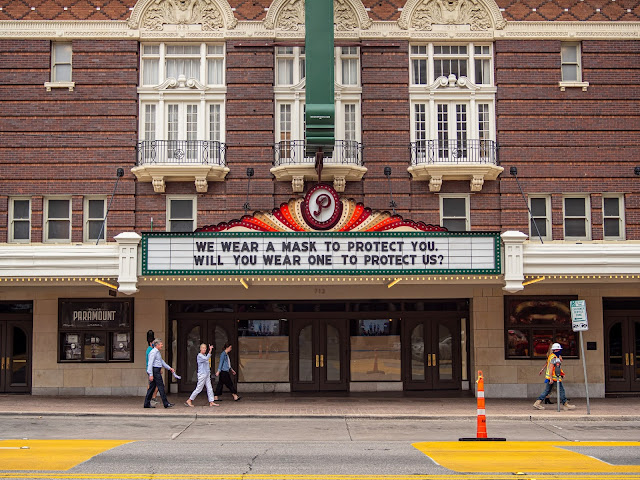 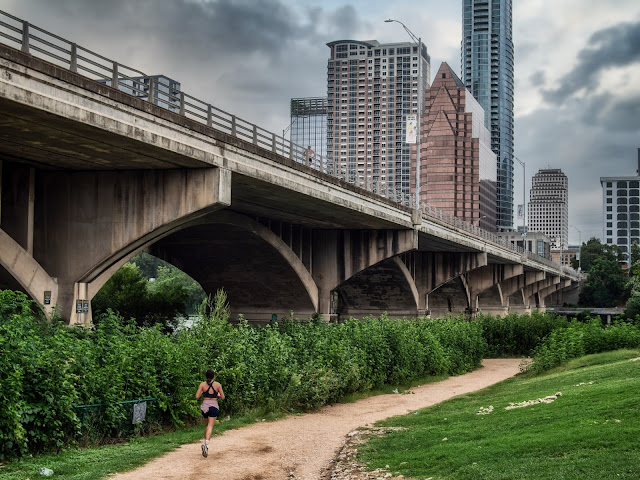 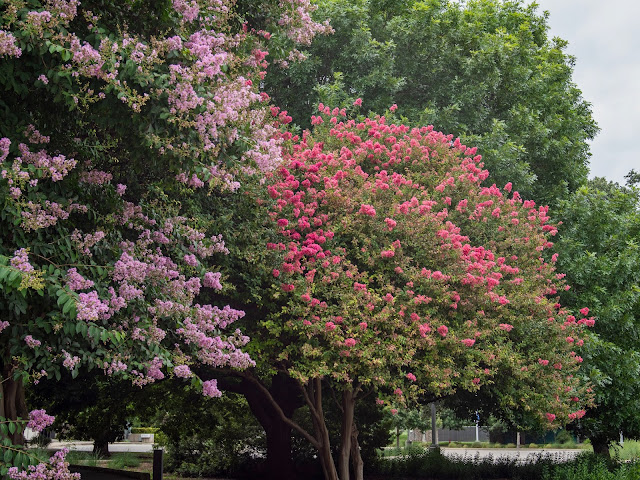 Another day wasted testing gear and then writing about it.

That's what happens when all the swim workouts are over by 8 a.m.

The Saharan Dust is still everywhere in Austin. That's why the usually brilliant skies look
so glum. Hope you are doing well wherever you happen to be. And if you are in
Europe and have been cleaning and preparing for my visit I'm sorry to say that
we'll probably not see each other in person till sometime in 2021.

In the meantime we can stay in touch via the comments. Please leave one.
Posted by Kirk, Photographer/Writer at 16:07 20 comments: