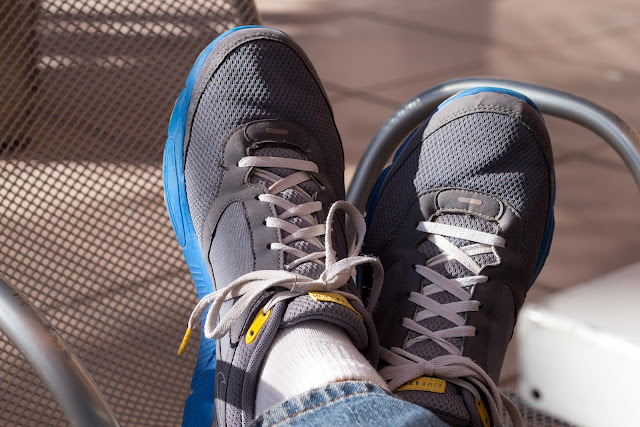 I hope you've already looked at Part One of "Today's Walk in Downtown."  I like the photo I put there and now I can report that I also like the old fashion looking telephone handset I bought there that plugs into my iPhone and makes it a retro desk phone.  Felt like being back high school all over again.

Today I wanted to spend some time with a lens I bought a few weeks ago that's been overshadowed by its sexier cousin.  I bought the Leica Summilux 25mm 1.4 for the micro four thirds at the same time that I bought the Olympus 45mm 1.8 (short tele) lens.  I put the 25 on the front of a Panasonic G3 and I haven't really shot with anything else since.  But yesterday I used both lenses and I wrote an article about that editorial style shoot (mostly about the Summilux) for The Online Photographer. According to Michael Johnston's message on his site today, the article will run tomorrow.

But I was feeling a bit guilty for having succumbed to the lure of the G3's 16 really sparkling megapixels and the magnetic draw of the Leica and for leaving the 45mm Olympus and the EP3 body in the lurch.  I tossed an extra battery in my pocket, inserted an 8 gigabyte Delkin SD card into the sleek, black Pen and headed out the door.

First stop was Whole Foods for coffee and a long overdue and highly necessary raspberry donut washed down with Sumatran coffee, laced with coconut milk.  The effects of this snack were so soporific I could do nothing at all for about ten minutes, other than photographing my own Nike, LiveStrong running shoes. 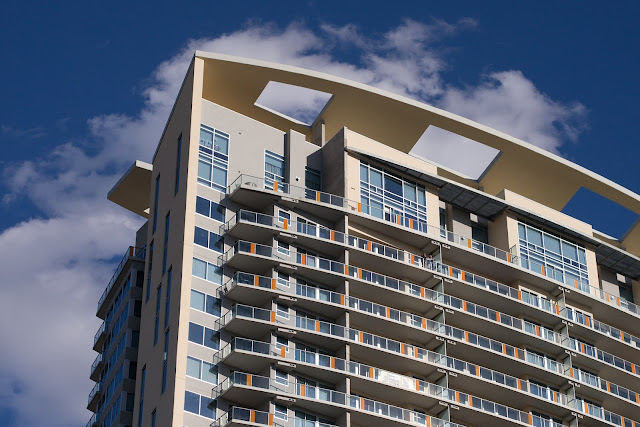 I popped off a couple of building shots so I could compare them with previous work.  That side by side comparability really helps when evaluating new stuff.  And I like the way the light is always changing on the most familiar downtown structures. 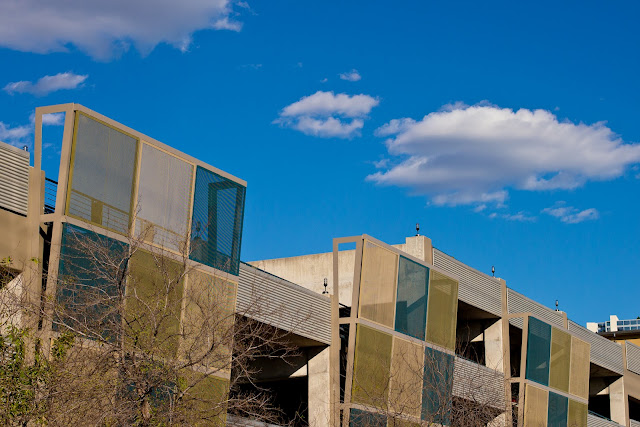 The 45mm 1.8, when used at f5.6 is wicked sharp and very quick to focus in bright light.  But you probably guessed that it would be.
Austin is gearing up already for the onslaught of humanity that will descend on the city during the SXSW Interactive/Film and Music Festival starting on the 9th of March.  If you like to shoot in the street, if you like to do candid portraits of strangers, if you like to photograph hordes of people talking, texting, photography and snuggling with their iPhones you will probably not find a more "target rich" zone in all of America than the ten or so square blocks of downtown Austin during those ten days.  Really.
The downtown area got a trial run today as people queued up at the Austin City Limits Theater, adjacent to the W Hotel, to attend the MegaDeth concert.  It was an interesting crowd.  Not the sort of folks I generally see at concerts. 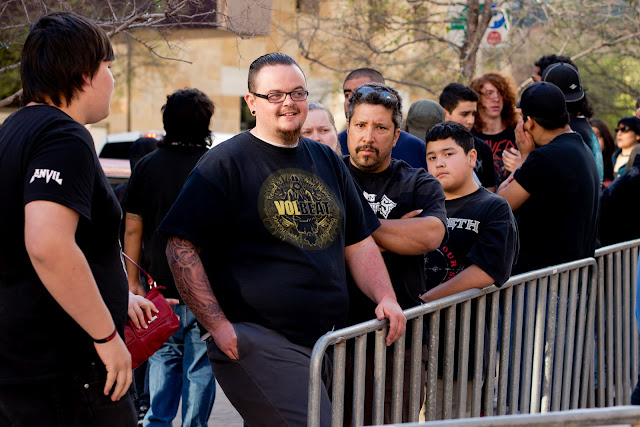 I took a few glancing images of the assembled fans and then continued my walk.  Today it really was all about just shaking out some cobwebs and dialing in an old favorite camera with a new favorite lens.  During the several hour walk I did remember just how much I like this general angle of view for camera lenses.... 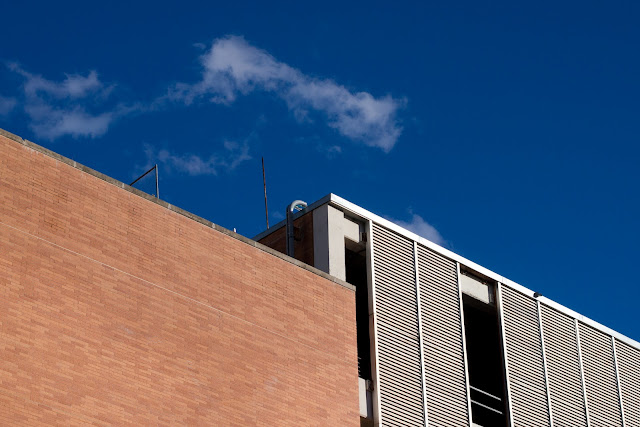 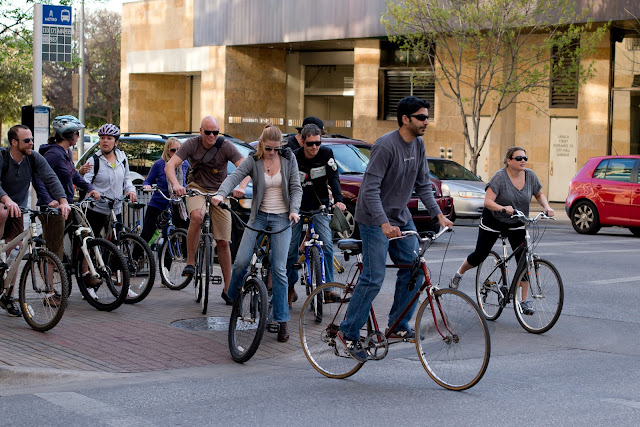 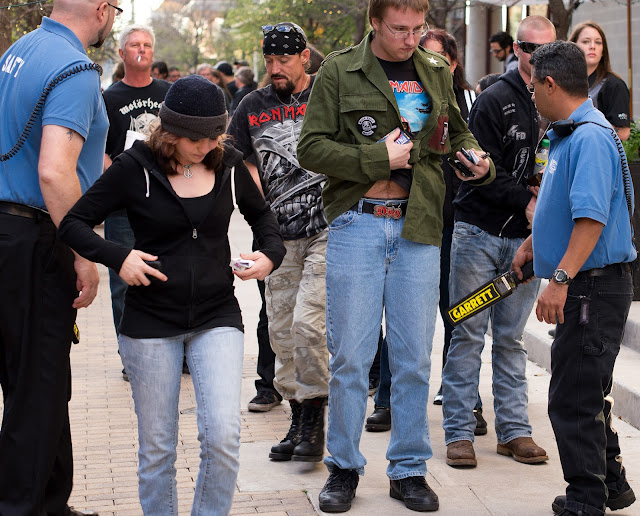 Two interesting points in the photos above and below (back at the Megadeath line).  The first is that I've never been to a concert where all the ticket holders are "wanded" with metal detectors.  I asked a security person what the deal was.  She casually let me know that this band's fans might forget that they've got their pepper spray or flick knife or chain in their purse or pocket.  They may have also forgotten to leave their live ammunition in the car.  The second point is that the Pen EP3 works very well in the face detection autofocus mode.  I used the first setting for these images and didn't worry about which eye got the attention.  I figured DOF would cover the differences.... 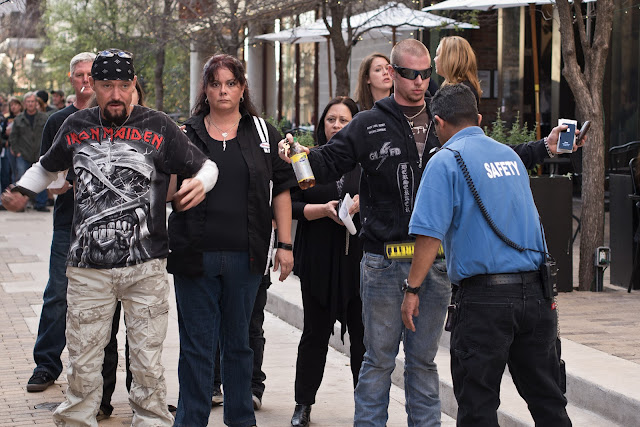 For a moment I thought about buying ticket and attending the concert before I realized that I wasn't dressed for the occasion.  Next time. 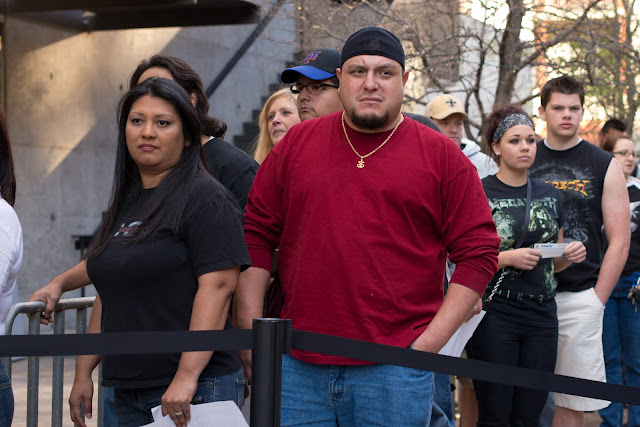 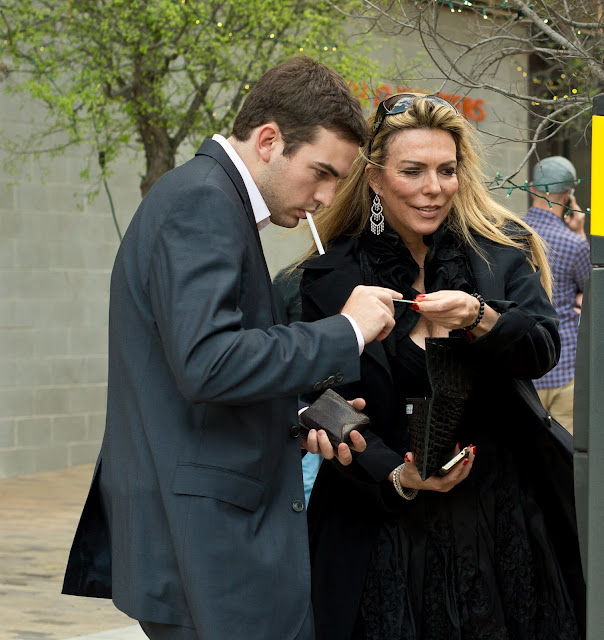 My final shot of the walk was this couple who were working as a synergistic team to figure out the intricacies of our paper spewing, high tech parking meters.  I'm happy to report that, after trying to wedge in some larger bills, they discovered that the machine does take credit cards.  They were able to pay for parking and go about their business.

The EP3 is a wonderful camera and so fluid in use.  The 45mm 1.8 (90mm full frame equivalent) is a great little lens with no bad habits and a good, biting sharpness.

There's a great tutorial over on Thom Hogan's "Sansmirror.com" site that teaches one how to sharpen and reduce noise effectively in the smaller sensor cameras.  I used his method and found it to be right on the money.  I'd put up a link but I'm betting your fingers need the exercise.

Don't forget to head to The Online Photographer in the morning to read my take on the 25mm Summilux.

Thanks for reading.
Posted by Kirk, Photographer/Writer at 19:37 8 comments: 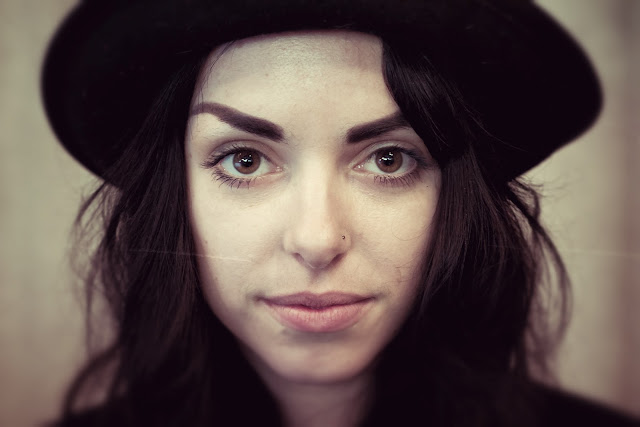 I walked along with one camera over my left shoulder and the Pen on a strap in the middle of my chest.  As I walked along Colorado St. I saw a fun, old fashion telephone handset re-conceived for the iphone.  The handset was in a window display so I went into the shop to see what the handset was all about.  I bought one.  And as I pulled out my credit card to pay for my purchase I looked up and directly into the eyes of this sales person.  Of course I asked her if I could make a portrait.  She was fine with that and her two associates were quick to point out that she'd recently been in a photograph in Tribeza Magazine.

I thought this person was interesting enough to deserve her own blog post.

Here is a variation: 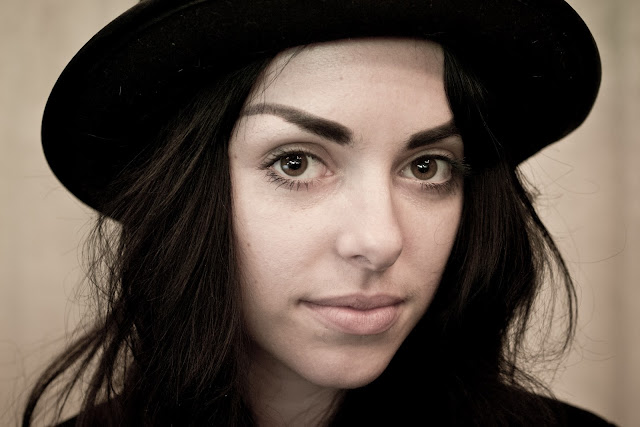 If you smile and ask most people are happy to collaborate with you to make a photograph.