What if I was really as smart as I thought I was? It would be so weird. 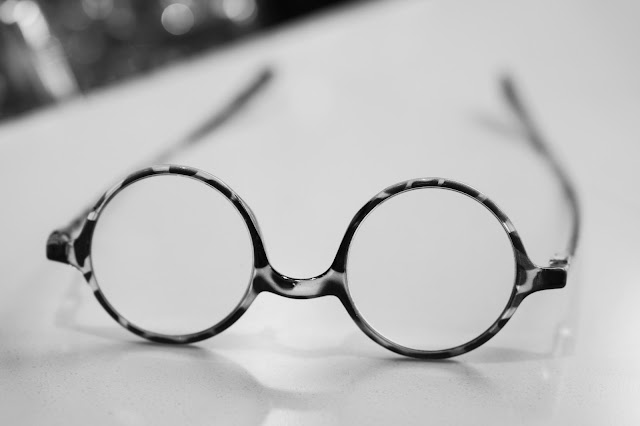 Two notes that are totally tangential to my life as a writer and a photographer:

1. Sitting down might kill you. At least that's what I keep reading over and over again on the web and in the last few paper newspapers I read. Apparently every hour of just sitting around (watching TV, reading websites, staring blankly at your computer screen, scribbling on index cards, etc.) cuts about 21 minutes off your life expectancy. I thought I was bulletproof because I swim hard for at least an hour six days a week and run a couple of days as well but the studies say: "NO."

And that's a nasty realization for someone who spends a lot of time doing file conversions and working in PhotoShop as well as for someone who really enjoys writing blogs. Because, in the past, I did all those things...sitting. By various study calculations I may already be dead and am just continuing on as a zombie.

When I had lower back problems a few weeks ago I did a bunch of research and found that a major culprit in the epidemic of lower back pain was.....ready for this?......sitting.  Around that time I started experimenting with my self by finding a piece of furniture in the studio that would allow me to read and write on the web while standing. My Sears Professional Craftsman Rolling Tool Chest was almost high enough but a stack of previous model laptops placed on top gave me the perfect elevation for my current reading/writing computer. I am able to stand in front of it with my elbows bent at ninety degree angles and type with ease.  I am also at the perfect distance from the matte screen on my 15 inch Powerbook. I have written a book chapter, a blog, an invoice and a scrunch of e-mails while standing in front of the assemblage and I'm feeling fine and productive.

I don't know what your situation is but if you are having back problems you may want to try a standing work situation. It's kind of fun. And if you rock back and forth you'll burn more calories than you would sitting (that's true just in keeping your major muscle groups flexing....) and that never hurts because it means you'll likely lose some weight if you are already at odds with your bathroom scale and, if you are either naturally thin or highly disciplined it means you can up the calorie count with reckless abandon.

The second note: I usually upgrade when new software upgrades are offered. Especially if they are offered at what I consider to be a reasonable price. For some reason I shied away from the first release of Apple's Mountain Lion, even though the price in the "App Store" was only $19.95. I just didn't want to deal with system trauma, no matter how remote the possibility. I didn't want to be one of those guys who writes (moans) on the web about loosing everything in a painfully tragic upgrade.

I waited until version 10.8.2 and today I updated the machine I'm writing this on. It was a fairly painless process. It took a couple hours to download the files and another half hour for the installer to do its dark and secretive vision. This machine is populated with most of what is also on another, newer Powerbook so I really wasn't tightrope walking without a net. But I needn't have worried. Everything seems to be going we the keyboar#$#$#%^%&$%*(*RHWRGATU$YWTGHWSTYETHEYWRYWRHYSGHAFYSRTWE%&$^^@#$^&#$%^#%&$YTHGQARYEDFGSFJERTWE&#%$&$%^&#%$*$TWETYWE

Ooops. Just kidding. I'll let you know if I run into any issues. I know, I know, you're a dyed in the wool windows guy... but the majority of our readers now read the blog with Safari so there has to be some interest in the operating system.

Posted by Kirk, Photographer/Writer at 16:43 25 comments:

Food shot. What I needed to do differently on this one. 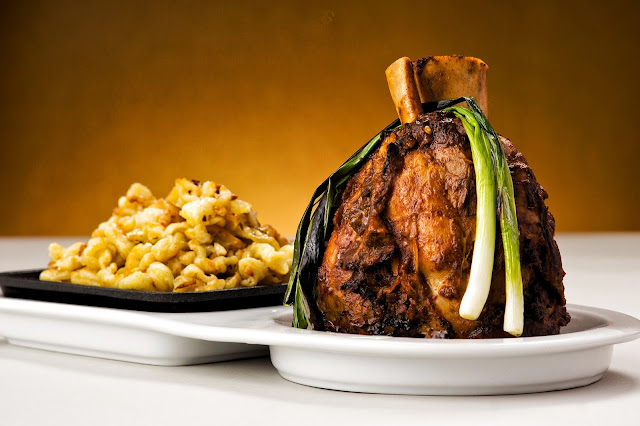 This is an image of a really lovely dish. It's a pork shank served with spaetzle. It's hard to make big hunks of meat look fabulous no matter how delicious which is why (with the exception of racks of ribs) most meat gets photographed as individual servings already plated.  Another exception is fowl which can look good when photographed in its entirety. Our client serves up this dish as one that's shared at the table. More a bar food than a restaurant entreé. My job was to make it fit into the series of images we would make for use in their advertising.

The image looks good in a web size and my client was pleased with the way it looks on the website for the business but in retrospect I think we could have made just a few changes to improve the overall image.

First, I think the dish might have been better presented if it had already been sliced to show the interior of the meat instead of just its delicious, golden exterior. Providing the privileged view of the insides for the package delivers more selling message per image.

Next, I could have used more olive oil on the exterior to create more shine and pop on the skin. When the dish was first presented it glistened more and we needed to apply some oil and some steam right before shooting in order to maintain that fresh from the broiler look.

In retrospect I wish that we had used some sort of garnish for the spaetzle since it looks to monochrome along with all the other warm colors in the image. A sprig of rosemary, some marinated purple onion or some other concise, fresh addition would have been a nice counterpoint to the softness and uniformity of the dish. My only concern would be potentially introducing a second point of focus which would draw the eye away from the cooked green onion garnish of the pork.

Finally, I wish I had used a stronger backlight on the dish. Just enough more raw light to add a crusty delineation to the top of the bone in the pork shank and to better define the edges of the meat.

I find it very useful to come back to an image after a few weeks and really study it. We learn more from our mistakes than we ever do from hitting it out of the ballpark every time. I'll ad this to my notebook on food photographs and take a look at it next time I head out to shoot food.

The above brings up a topic that I feel strongly about (which ones don't I...?). I've had the habit of keeping a "job journal" for many years now. I sit down after a job and write notes about things that worked and things that could have worked better. Some of the journal entries are extensive and detailed while others are little more than recordings of feelings or moods. Along the lines of, "How did that portrait interaction feel? And why? What should I have done to move it into more positive territory? Could I have changed the Gestalt?"

Usually the journals are much more technical than emotional. For instance, I did an assignment last week for a company that tests chemicals, creates reference compounds, and analyzes complex substances. It's the kind of quiet company filled with employees who have doctorates in chemistry and other esoteric fields. This was a job that is part of a recurring advertising campaign and one in which they would like continuity of the visual components.  For me, that means getting the lighting and point of view to match up.

I was doing portraits against a white background with individual people dressed in lab coats. I looked back at last year's journal entry of the same, basic job. I was able to quickly find that the distance of the background lights (three total) was 12.5 from the white seamless background. The background, measured with an incident light meter read f8.2.

The distance from the background to the subject was 23 feet. The distance from the 60 inch softlighter diffused umbrella that I used as a main light to the subject position was approximately 50 inches. I used a Westcott one stop net between the main light and the subjects right shoulder so that the ultra-white lab coat would not burn out. I was able to see that last year I used a passive fill reflector as a fill light to the opposite side of the subject. It was a 40 inch round white reflector.

Having all this information at hand meant that this year I was able to set up more quickly and surely, spend a bit less time testing and come away with images (portraits) that will match, year-to-year.  It was a time saver. There were also notes about how I post processed the images as well as how and to whom I delivered them.

The cameras changed from last year to this year but after a conversion to black and white for the campaign the biggest issue will always be the uniformity of lighting.

My notes for the food shoot done in late August are more...voluminous. And when I studied the notes yesterday I went back and referenced a food shoot I'd done several years ago with LED lights. While I dealt with a few technical issues on that shoot it presented an interesting counterpoint to the recent shoot. I think the lighting was much more nuanced in the previous shoot. I'll study a bit more and see what I can combine from both the food shoots to make the next one a little better.

Younger photographers may scoff at the idea of keeping a job journal since they can remember most of the shoots they've done so far, but jobs pile on jobs and details get muddled. At this point in my short career I can look back at my ledger and find that I've done over 10,000 assignments. Most are not memorable but some are mileposts and point of view shifters.  Having a clear, post action assessment helps me to intellectual internalize what led to success and what details led to less success.

I still remember, with much clarity, a note I wrote myself after a personal trip where I took along everything but the darkroom sink. I told myself that I felt I had carried a boat anchor through Paris. I suggested that a small, fast camera body and a zoom lens that covered 24-85mms was all a vacationer/street photographer/documentarian would/should ever need. That and his wits. I hedge my bets when I travel and also take a fast, short telephoto; like an 85mm. But when I sit down to pack I'm always like a kid in a candy store. Bags get crammed full of stuff even though I know in some part of my brain that picking up a bag and carrying it across the studio is nothing like carrying the same stout bag on and off trains and over my shoulder for ten or twelve hours a day.  Then I read my note about travel cameras and I open the bag and start dumping stuff back into the drawers. I always thank myself later.  And you know what? I never miss the gear I didn't bring.

I think a journal is even more critical for an amateur/enthusiast. Since you don't shoot as often you tend to get rusty. A good journal is always there to remind you of what ultimately makes you happy each time you go out to shoot. And it reminds you of what you didn't use, hated carrying and wish you'd left at home. Sometimes we all need a reminder.

Go out and shoot and have a great day!
Posted by Kirk, Photographer/Writer at 09:56 6 comments: