Book Notes. Getting a fresh copy of The Lisbon Portfolio.

Just a few notes about the novel. It's selling well despite the fact that our first version had too many typos and some inconsistencies. The vast majority of the glaring faults have been corrected with help from VSL reader, Michael Matthews (good eye!) and design elbow grease from Belinda. If you buy the Kindle book from Amazon.com today you will be getting the latest version. But if you bought and downloaded the book a week ago you probably got the first version. But don't worry, it's a pretty easy fix.

The neat thing about Kindle books (app available free for all kinds of tablets, laptops, regular computers and even phones....) is that a book becomes upgradable. Like firmware its content can be updated by the author and re-downloaded by users. In order to get a fresh version here's what you need to do:

Go to your account on Amazon.com and click on: Manage Your Content & Devices. Once that page comes up you'll see three different headers. One says, "Your Content", one says, "Your Devices" and the tab on the right hand side says, "Settings." You want to go to "Settings."

Once you are in settings scroll down to a selection that says, Automatic Book Update. By default this is off. You should turn it on. It lets you upload the latest version of a title that you've bought but may have subsequently deleted from your device. The default to "off" is for people who have done detailed annotations of books and who do not want to lose those changes by getting a new version...

Once you've made those changes go back to your device and delete the current book. (DO NOT DELETE THE BOOK IN THE "YOUR CONTENT" SECTION OF YOUR ACCOUNT PAGE ON AMAZON OR YOU WILL LOSE THE BOOK UNTIL YOU PAY FOR IT AGAIN!!!!!). Then head back to the cloud on your device and download the book again. This will be the new version.

Thank you to all the hundreds of people who've purchased the Lisbon Porfolio and a special, extra thanks to the people who've gone to Amazon here in the states and in the U.K. to leave reviews. While most of the reviews are currently five stars even the three star reviews (generally nicking the typos) usually end with, "But all that aside the story is really fun and I'm already waiting for the next book."

For everyone who doesn't like reading on an electronic device we will have the paperback version up on Amazon shortly and it will have all the corrections of the current e-copy. The book comes in at around 480 pages. It should be fun. I am ordering a case. You know what I'll be giving out over the holidays.....

Posted by Kirk, Photographer/Writer at 17:30 3 comments:

Email ThisBlogThis!Share to TwitterShare to FacebookShare to Pinterest
Labels: The Lisbon Portfolio

A Follow Up on an Earlier Post for People Who Like Buildings. The Olympus OMD EM5 and the ancient, but still alive, Olympus 150mm f4 Pen FT Lens designed for half frame film cameras. 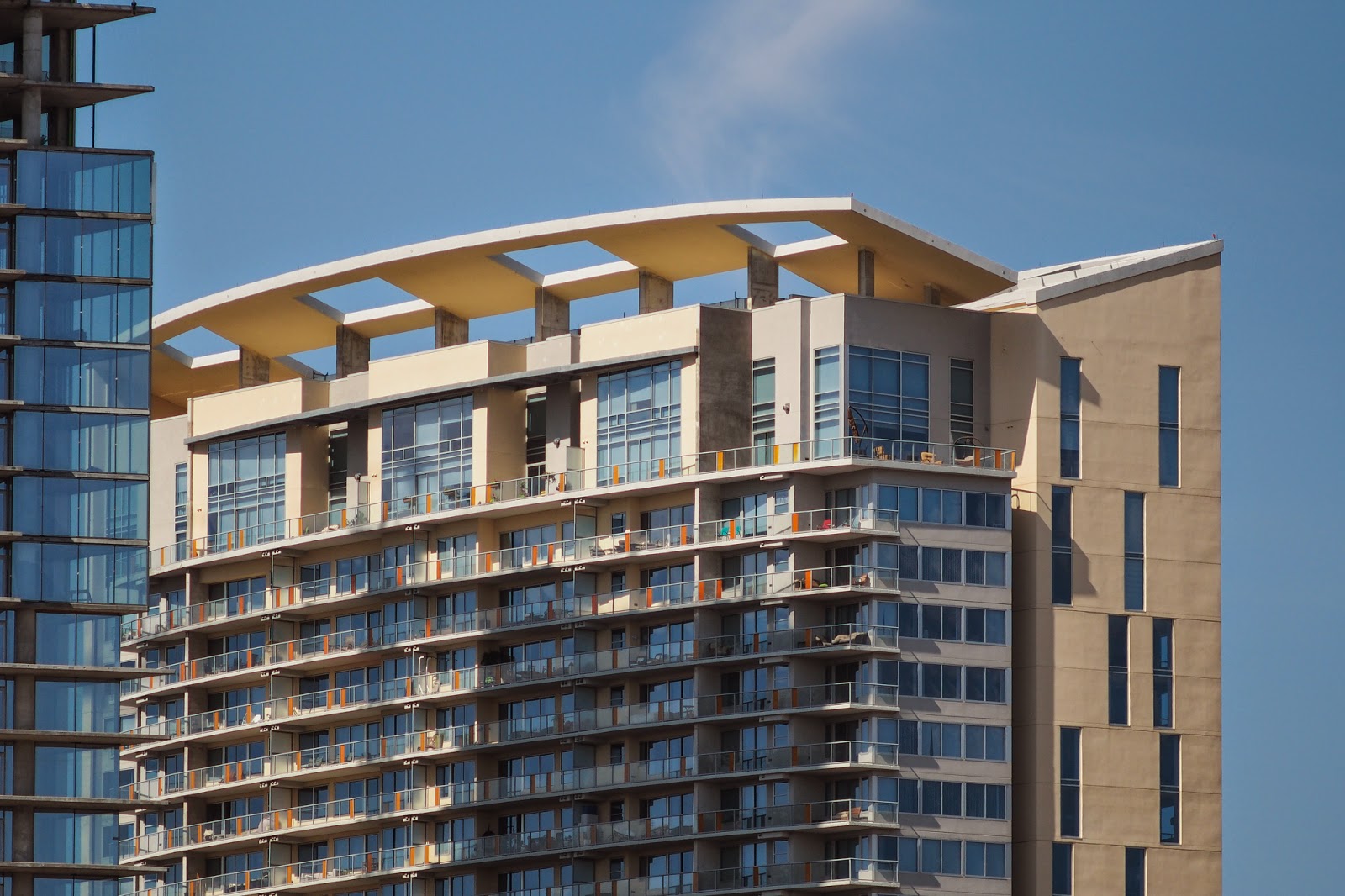 This is a follow up to the article on the 150mm f4 from earlier in the day. I wanted to shoot some images of objects that weren't moving. I like these buildings so I thought I'd use them as a good test of the sharpness of the old Olympus Pen FT lens on the EM5 sensor. When it comes to architectural photography I'm a pretty easy sell. I think the image is a lovely example of a long lens going for details. 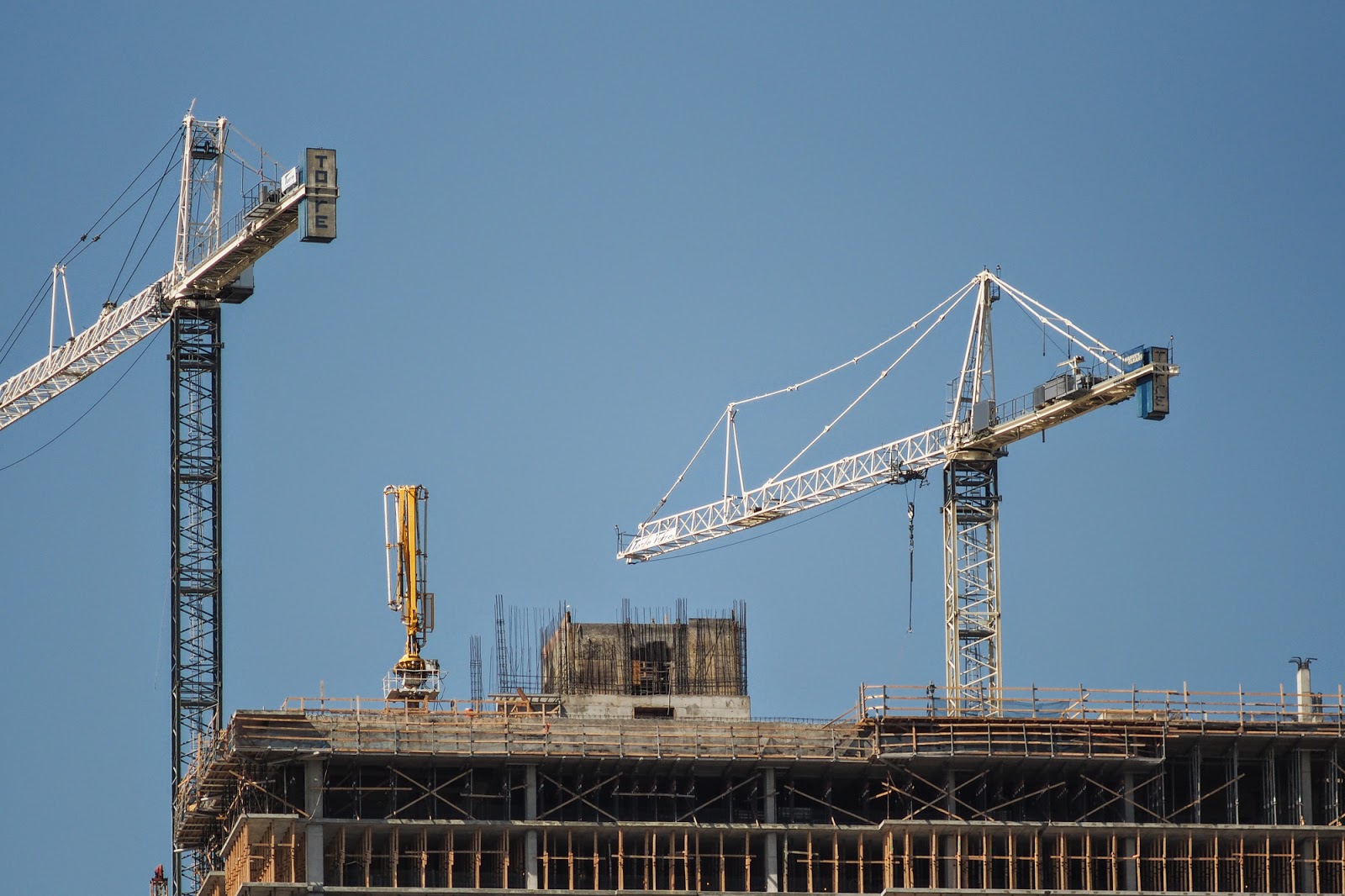 The city bird of Austin is the crane. I'm showing this because the skies in the images done with the 150mm are different in color and saturation than what I get from more modern lenses. Interesting (to me) that the rendering seems more natural in the older lens. It's almost as though we've developed a taste for saturation that is at odds with our endless declarations that we are just looking for the highest accuracy in our photos. 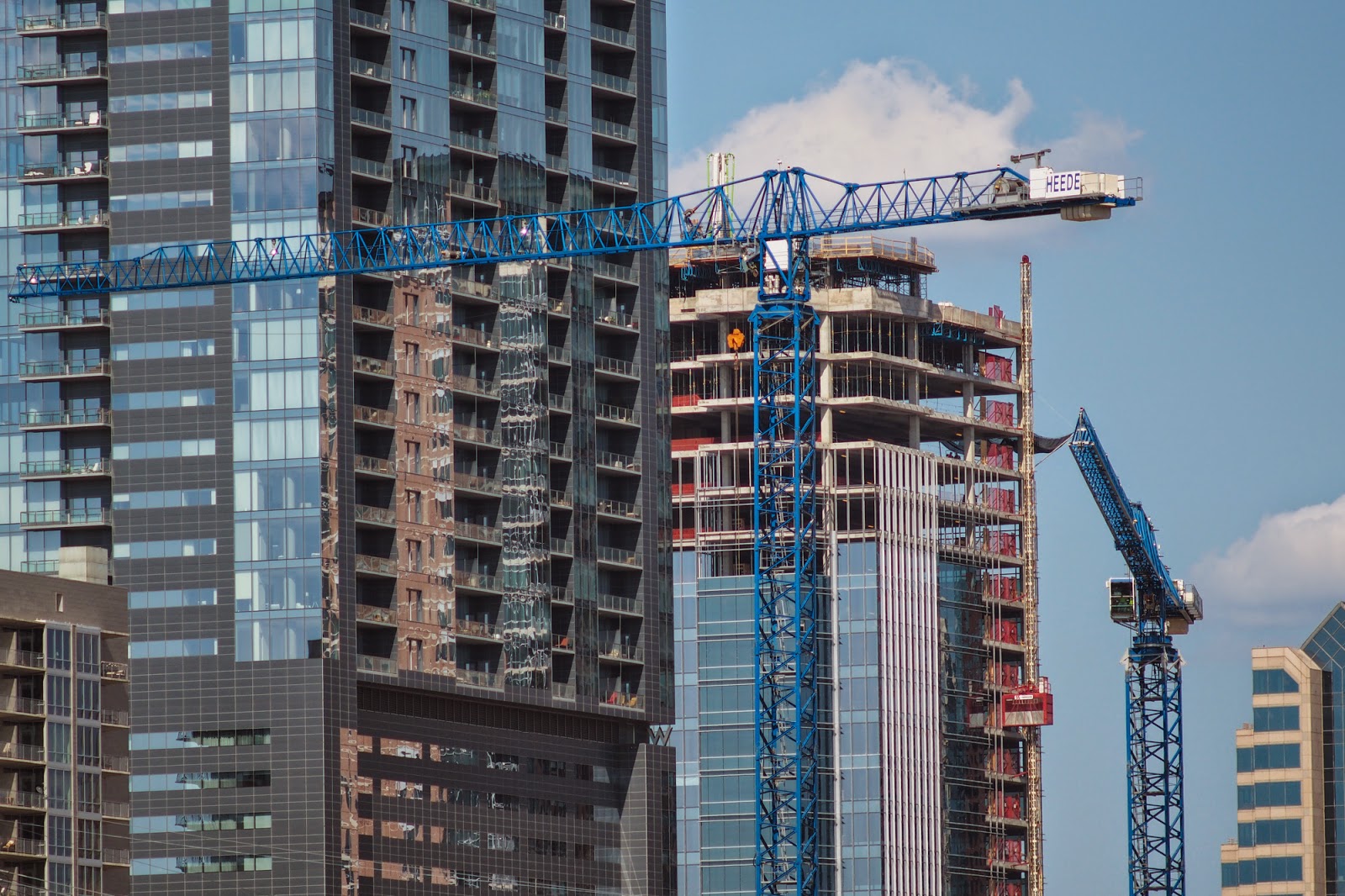 When I stopped down to f 8 the detail from this ancient lens was astounding. 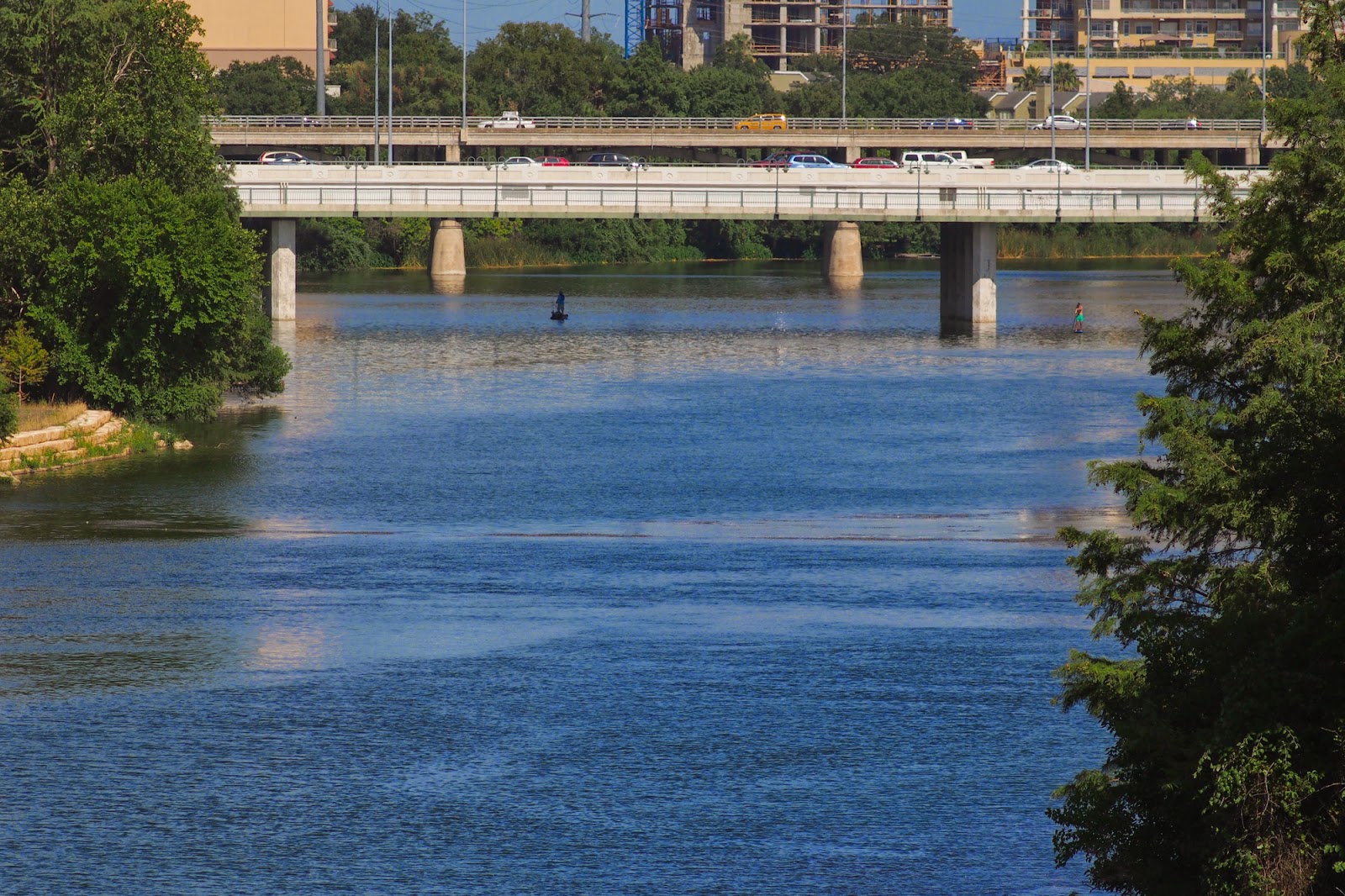 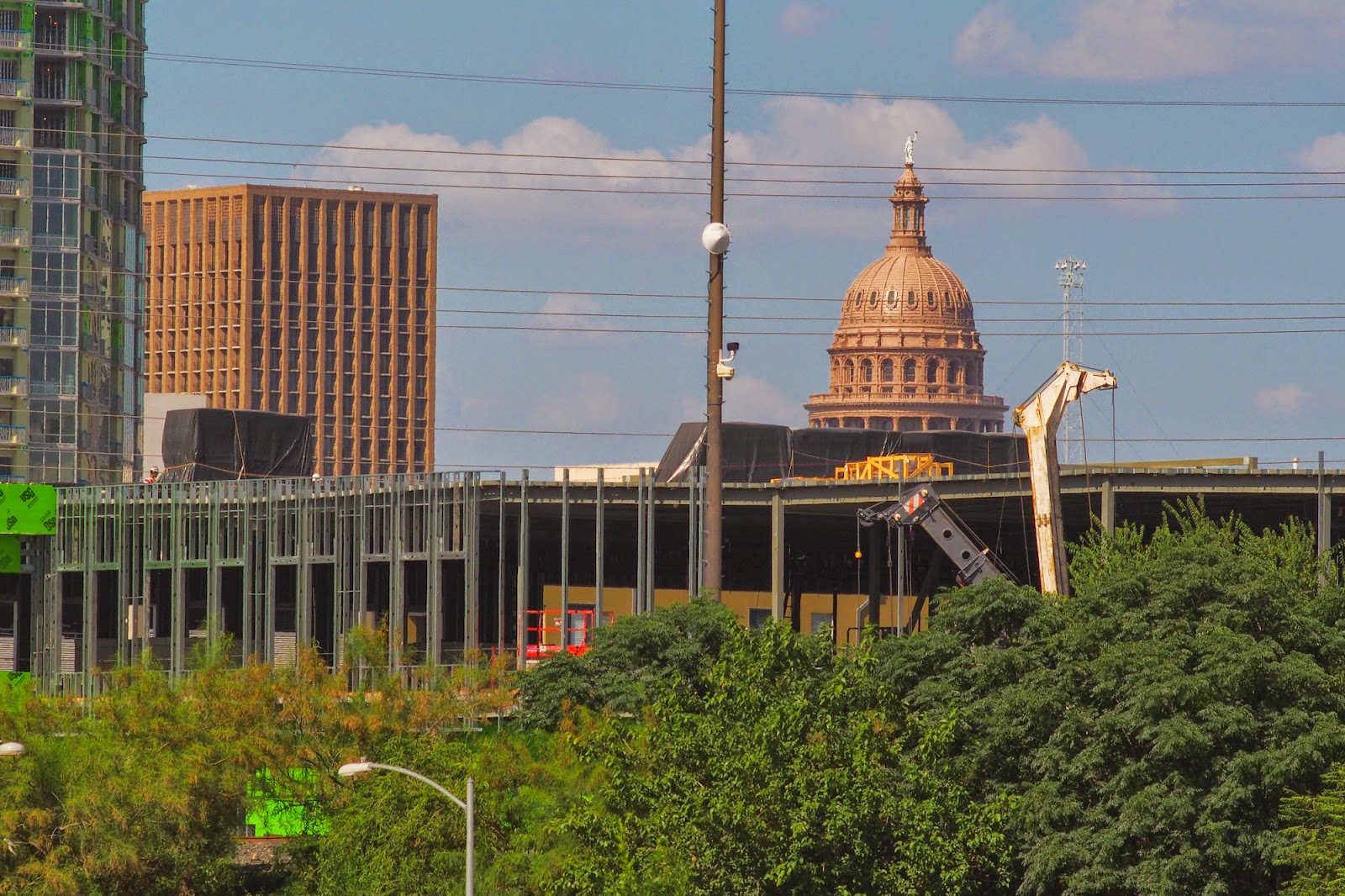 The State Capitol from nearly a mile away. The detail on the dome is still sharp. Might have been sharper but for the heat waves and atmospheric clutter.... 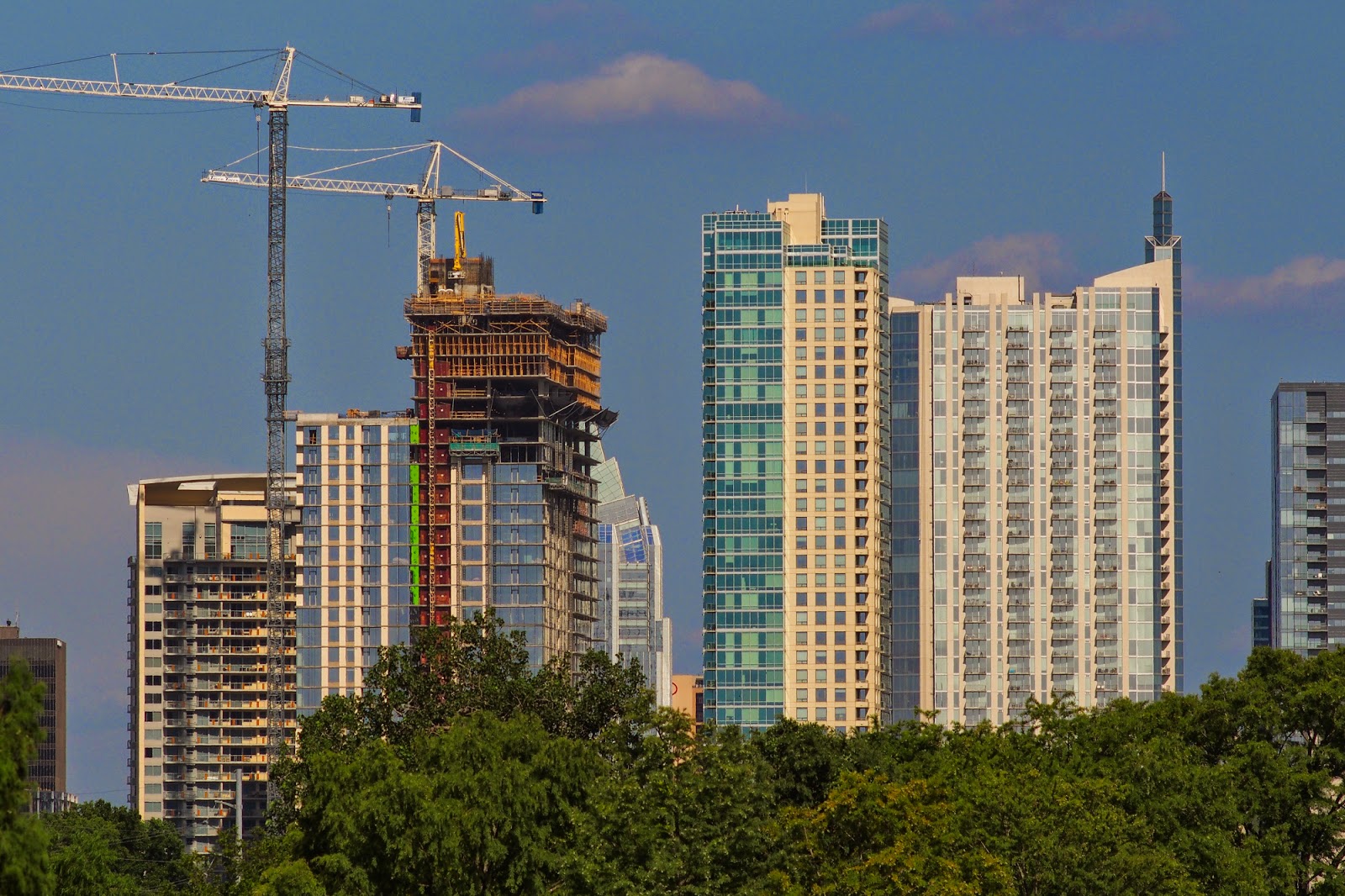 This late afternoon shot was done from the pedestrian bridge under the Mopac Hwy. Nearly a mile and a half from the buildings in the image. An interesting test.

Posted by Kirk, Photographer/Writer at 15:30 2 comments: 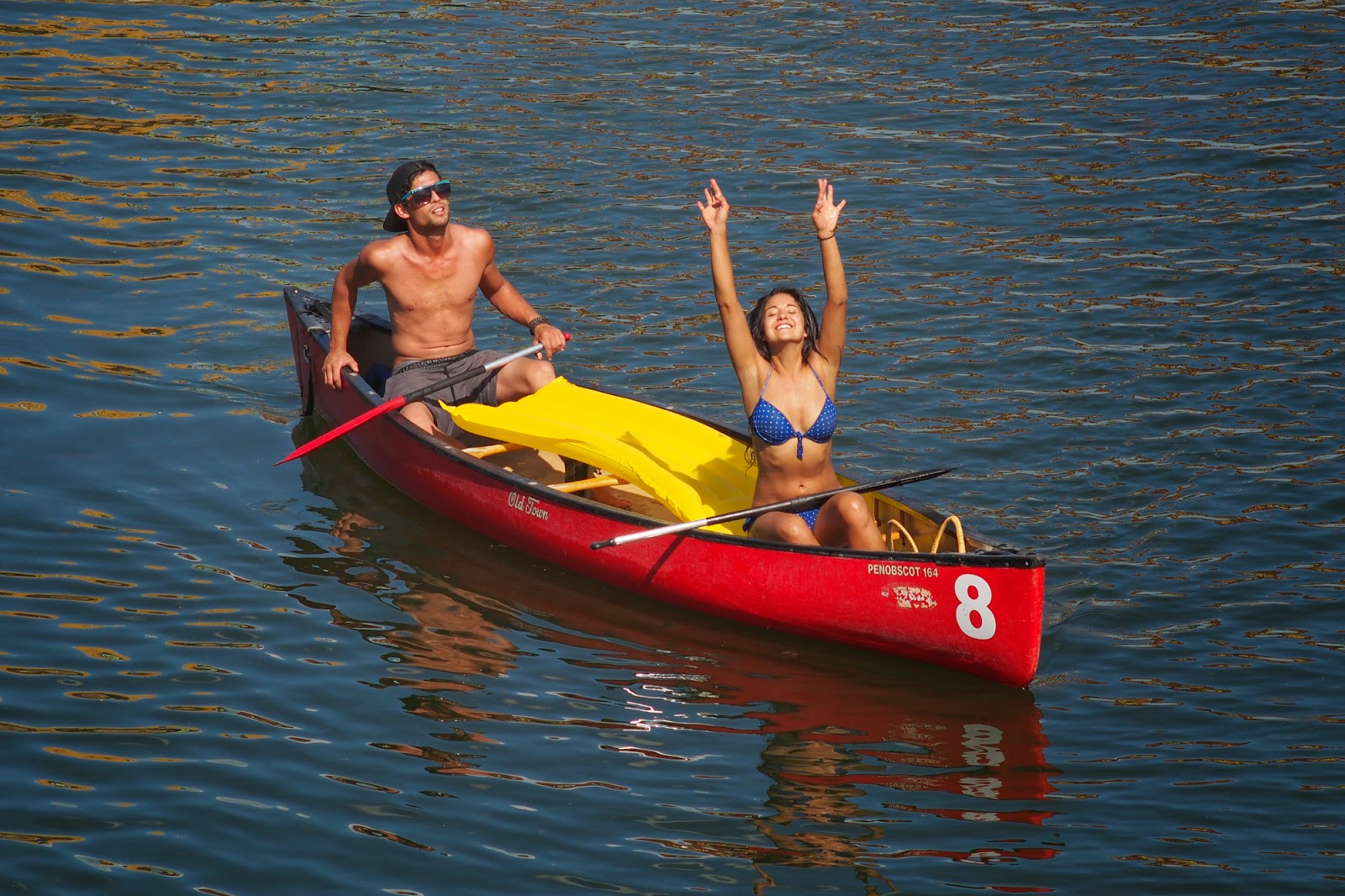 Austin can be a really fun town when things slow down in the Summer. There is a whole series of Lakes around Austin including one which runs right through the center of downtown and is part of the Colorado River system. I'd just gotten a second Olympus OMD EM5 camera last week and in a fit of eccentricity I decided to put an ancient lens on the front of it and go out in the hottest part of the day for a walk. The lens is one I have written about before, it's the 150mm f4 made for the Olympus half frame film cameras from four or five decades ago.

The lens is slender and compact and fabricated totally from metal. There is nothing particularly impressive about its exterior design or finish. I had done some test shooting with the lens back when I owned a Panasonic GH2 and an Olympus EP-2 and either my technique at the time was flawed or the lens and the sensors of the day did not play well together. It seemed at the time to be lower contrast than modern lenses and less sharp. I don't know what I expected when I took it out last week but life is full of surprises.

Sprinkled through this post are an assortment of shots from the lens and the EM5. As I was out walking for fun I did not bring along a tripod so all of these shots are handheld. Most are shot either wide open or one stop down. Several are two stops down from wide open. I set the camera for "vivid" and shot on automatic in the "A" mode.

It's rare that I shoot with longer lenses but I am a fan of compression so I guess I should try it more often and work on my proficiency. Lady Bird Lake (formerly "Town Lake") was a "target rich" environment for a person with an agile camera and long lens. There are some niggles to working with the lens but for the most part I find it to be a good performer. As I began my walk I had not yet figured out how to magnify the preview image for fine focusing. I finally realized I could apply that feature to a function button. After than my keepers (at least for sharp focus) went up.

One benefit of Olympus's implementation of IBIS is the ability to stabilize the preview image which really helps when the field of view narrows down. I used the IBIS for every shot.

The lens is actually pretty sharp but wide open and near wide open it does suffer from some magenta or purple fringing and a bit of chromatic aberration. Fortunately these are both easy to fix in Lightroom. The lens was a much better performer on the EM5 than in previous generations of cameras. I also used this lens recently for a dress rehearsal of Tommy at the Zach Theatre recently and it was there that I first realized that it really was a good (with caveats) lens. 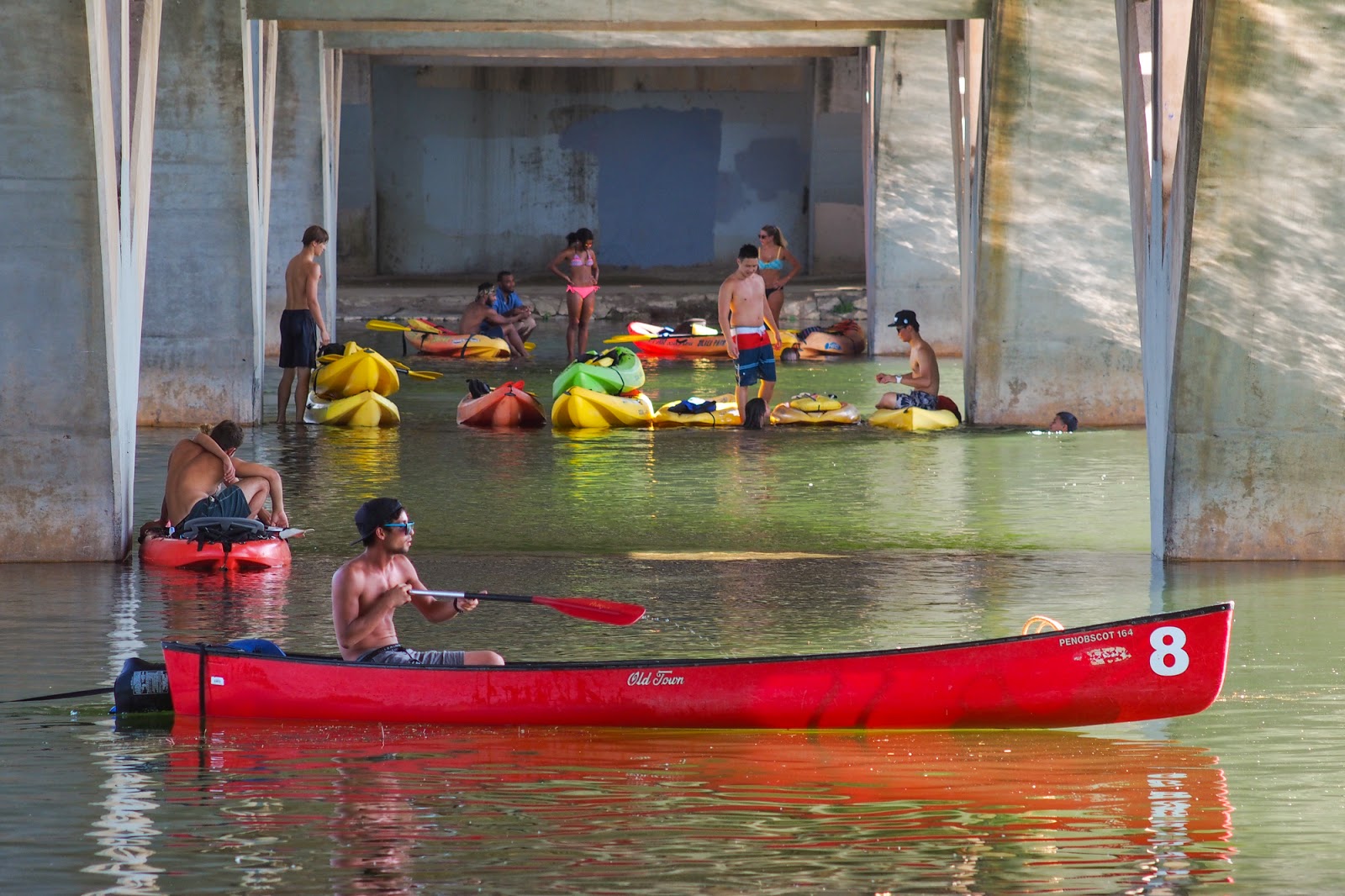 It crested 100 degrees on this shooting day so everything was pretty much shot around water. The image just above, with the beautiful, red canoe is underneath the old Lamar Boulevard bridge. After a longish paddle from the boat docks people use the shadow of the bridge to cool down and take a break. They also crawl up on the arching pillars and jump into the water. Spotters help the jumpers navigate so they don't end up hitting a paddle boarder or canoe-ist. 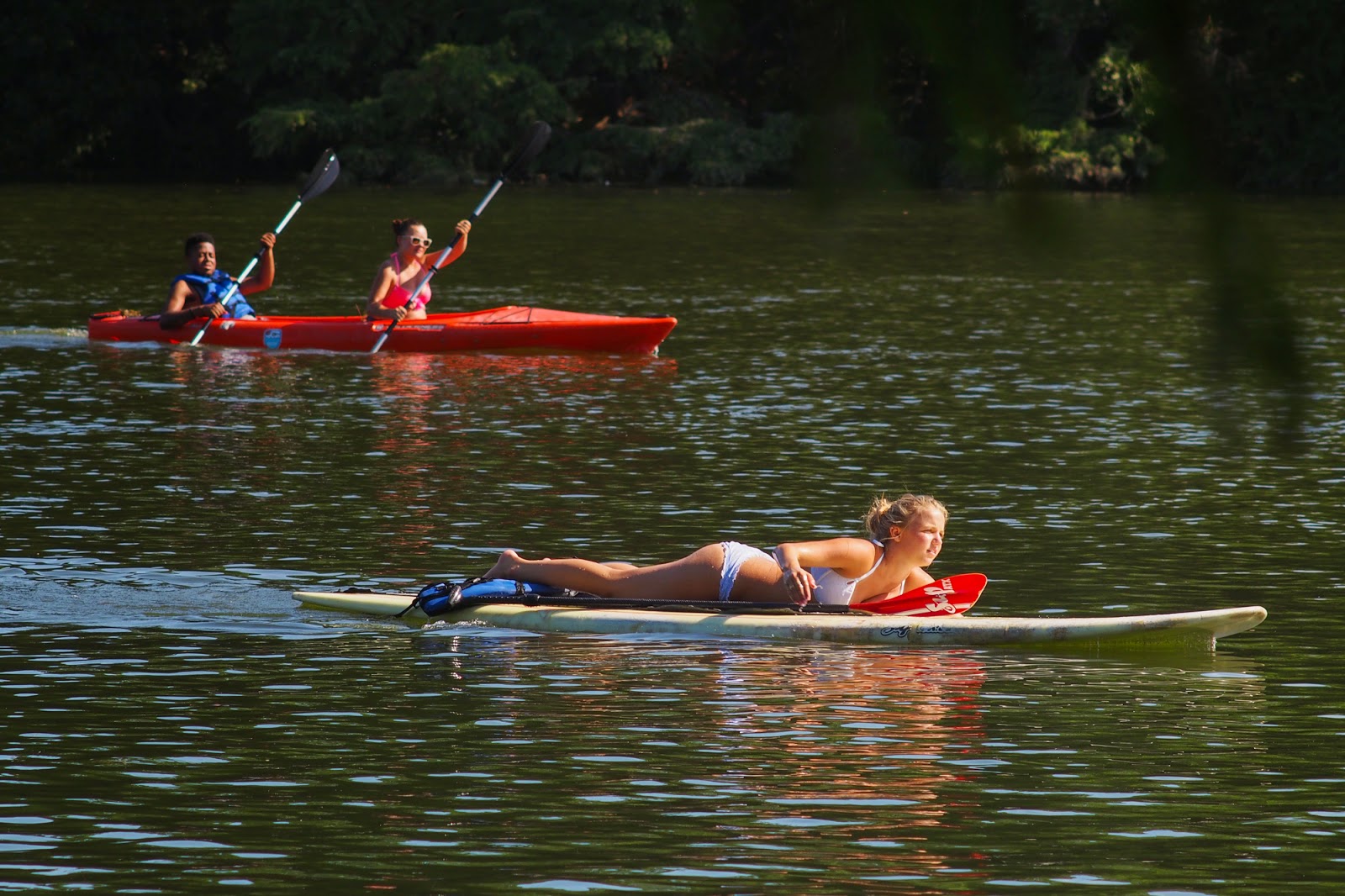 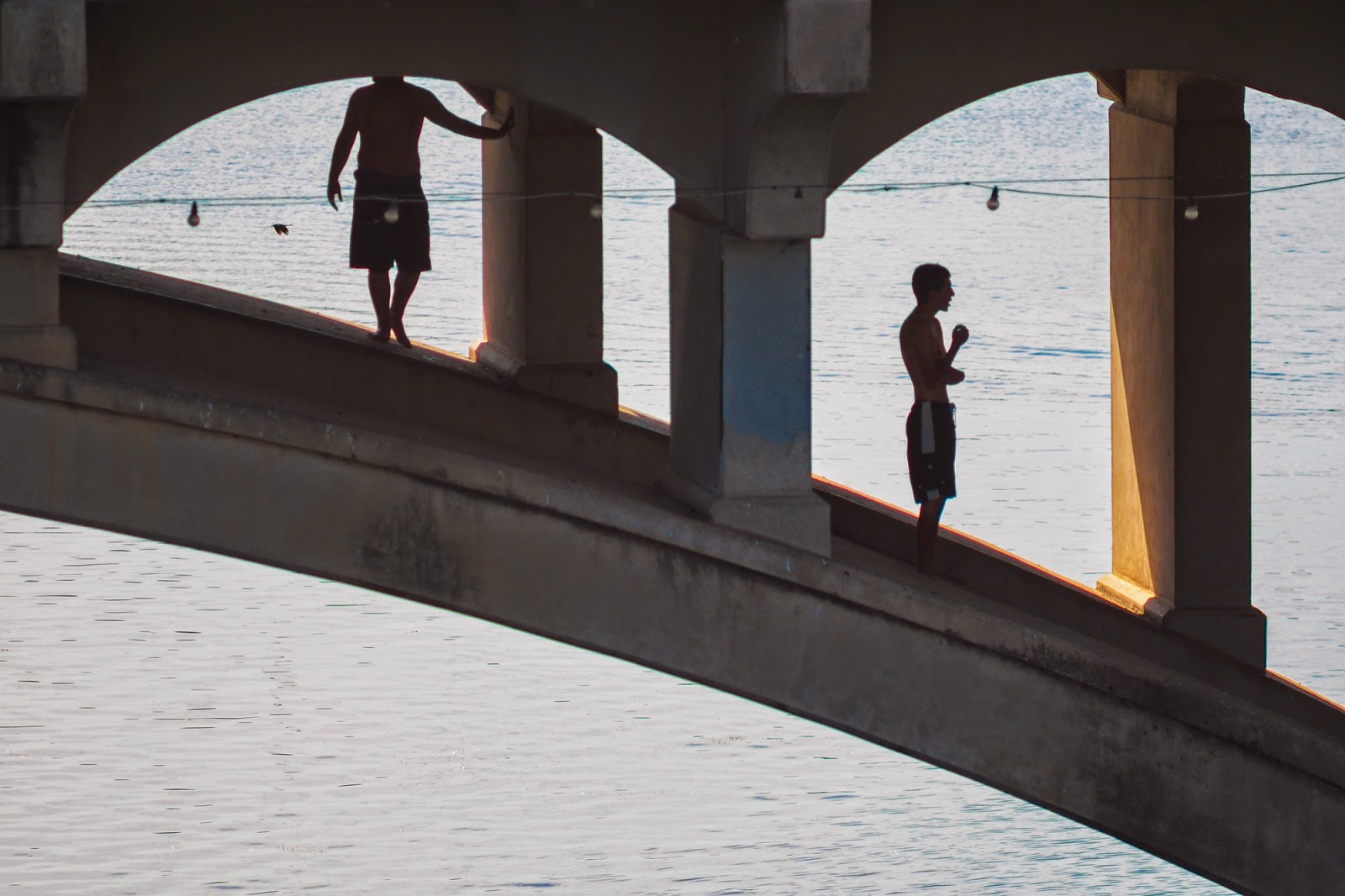 Jumpers on the Lamar Blvd. Bridge. 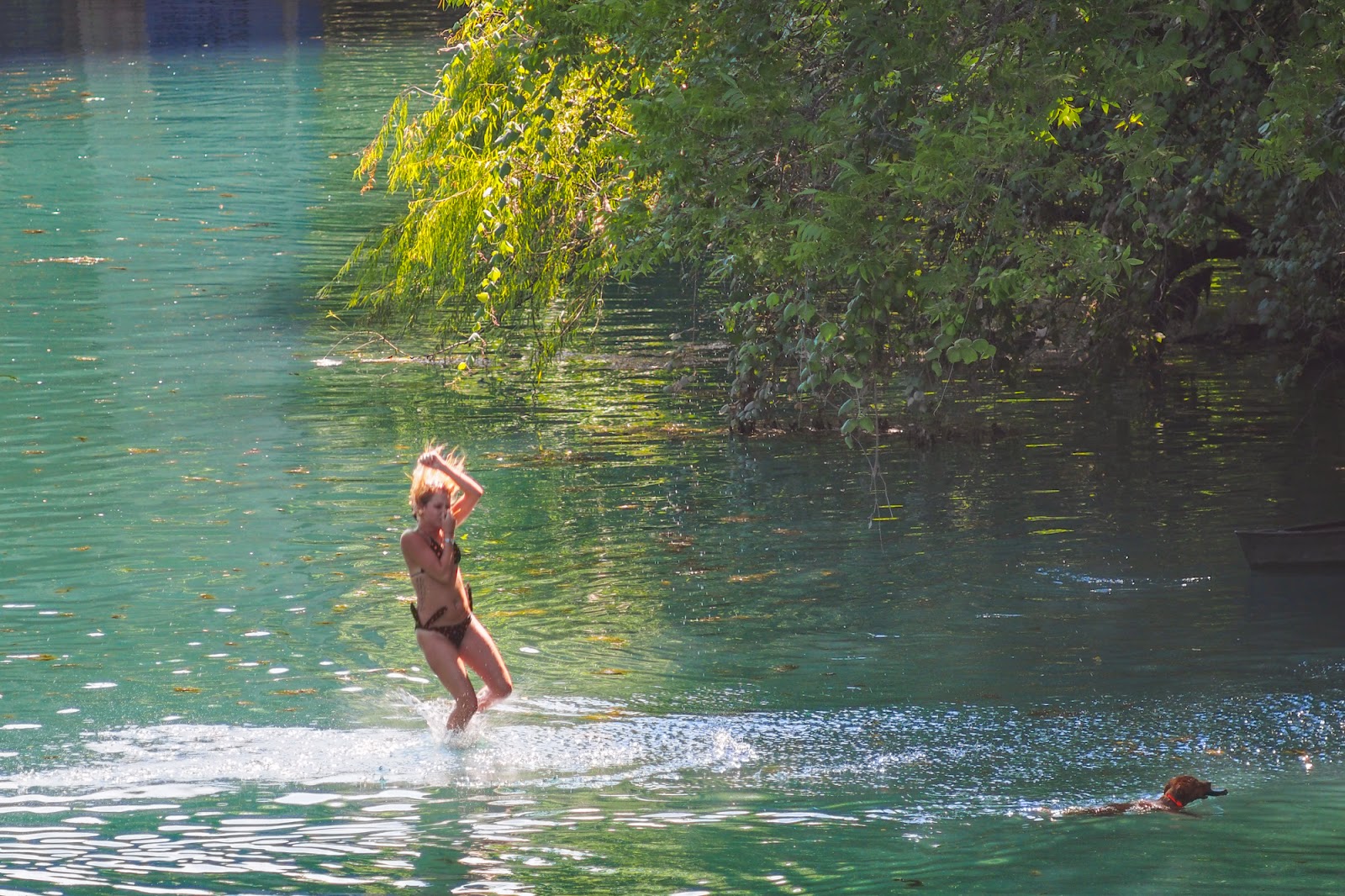 Jumping from a rope spring in the tributary that runs from Barton Springs into Lady Bird Lake. 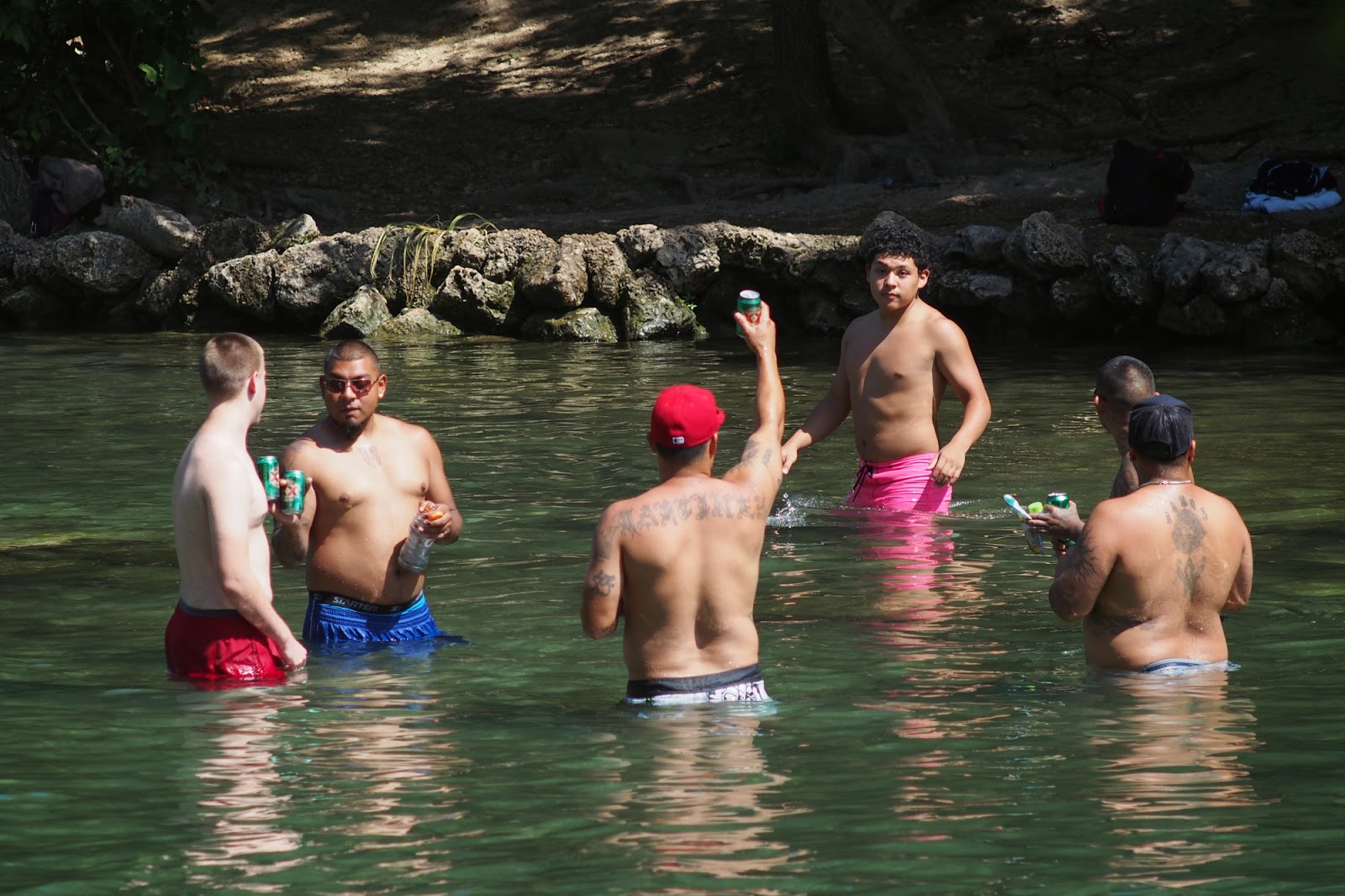 In the spillway just under Barton Springs Pool. 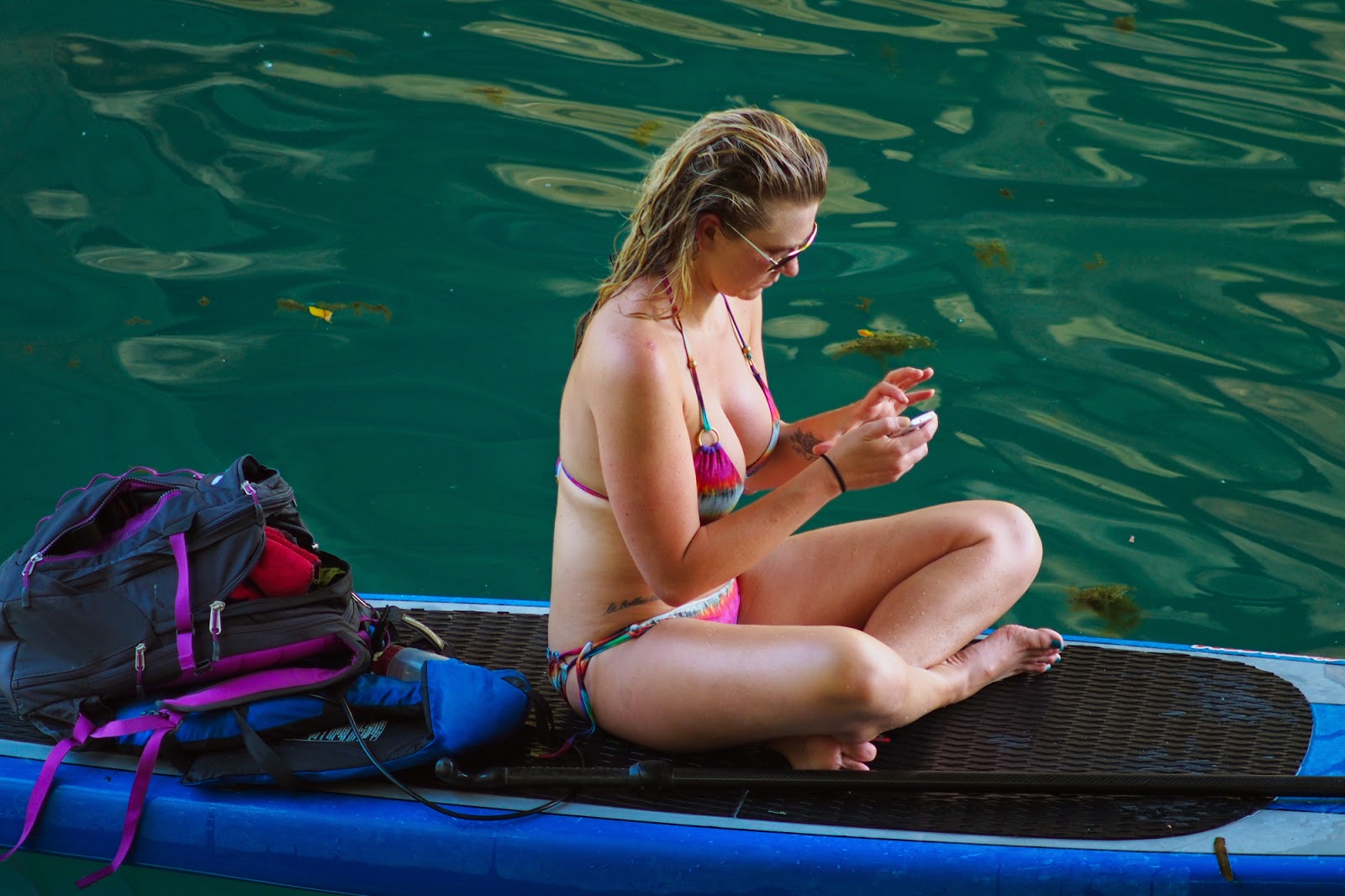 The ubiquitous phone. Under the Barton Springs Rd. Bridge. 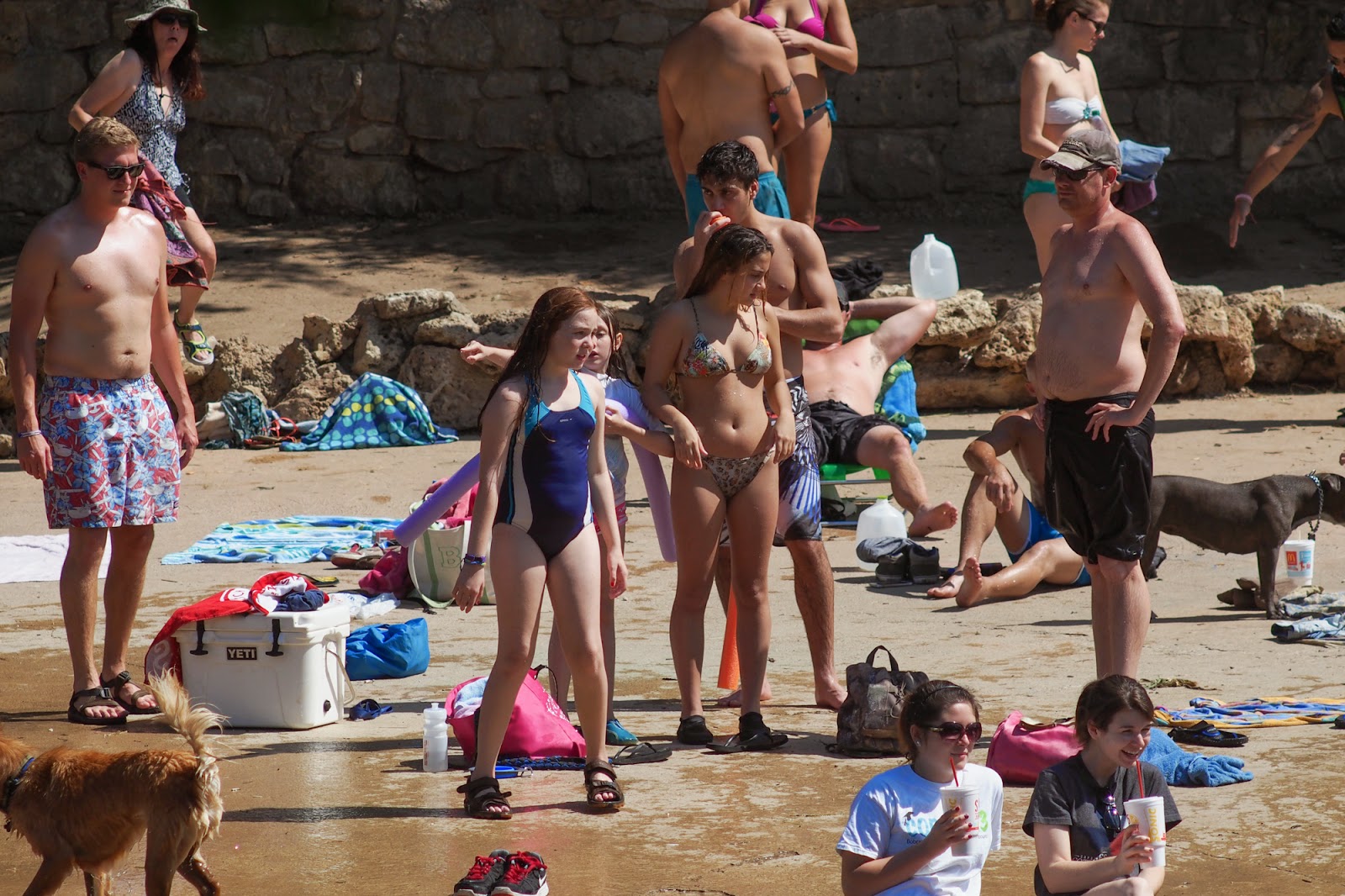 There was a big crowd at the Barton Creek Spillway.

It's interesting to be self-employed in the Summer in Austin. There is so much inertia to just give up on commerce and join in the three month long vacation that so many people seem to be on. I try to skirt work as much as possible by limiting my marketing and just accepting work that comes in "over the transom." At some point the cash flow slows down to a trickle and I realize that I live in an expensive town and then economic self-preservation kicks in and I get back to business.

But a little part of me always imagines how wonderful it would be if I could spend the whole Summer just swimming, walking, napping and eating Frontera Fundido tacos at TacoDeli. All with a little camera over one shoulder.

When I wake up happy from a Summer nap I always have the idea that work is over rated.

Posted by Kirk, Photographer/Writer at 14:02 2 comments: