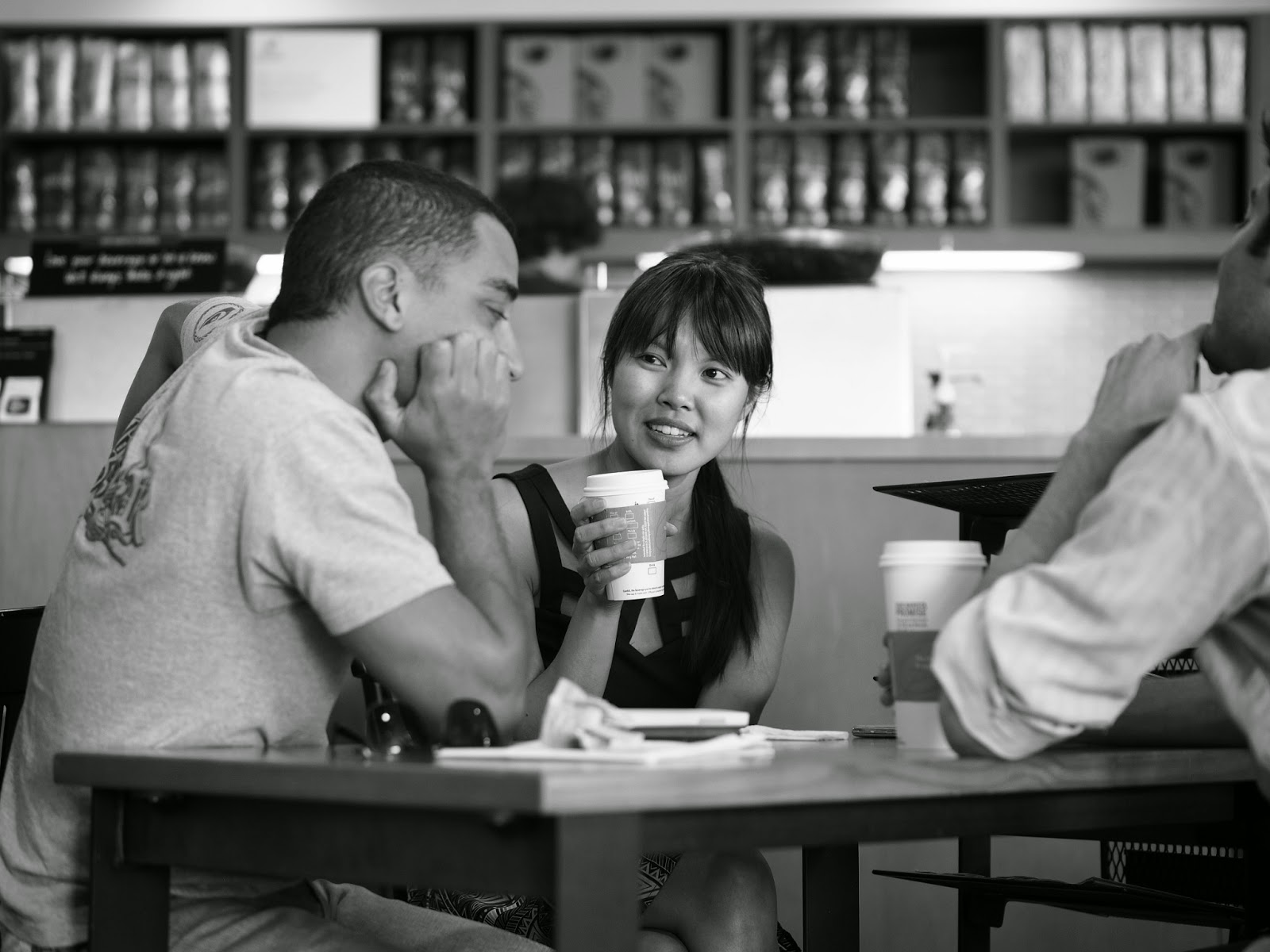 It was a warm and muggy afternoon. I'd spent most of the day working on accounting and then choosing images for a hardback book I'd promised to make for a client. Frank called to see if I wanted to take a break from the drudgery of work and have a cup of coffee and a nice conversation. Who could say no to that? We agreed to meet at my neighborhood Starbucks. Just before the appointed time I stood up from the desk, grabbed an Olympus OMD EM-5 with a Panasonic/Leica 25mm lens on the front and hustled out to the VSL ultra-performance Honda CR-V.

Since it's a stock car I had to use my imagination to hear the throaty growl of the tuned exhaust. I also had to imagine that I was shifting at the perfect moment in the power curve since, of course, the car has automatic transmission. I also imagined the smoke coming off the tires as I accelerated and  pulled out onto Bee Caves Rd. because I was actually following an older person from the neighborhood who was pushing their Volvo wagon right up to around 15 miles per hour....

I arrived at the agreed time, uncharacteristically I ordered a coffee frappucino, and then joined Frank at a table. I placed my camera over to the side and Frank reached into his camera bag and pulled out the 42.5 mm, f 1:1.2 Nocticron lens. It's a beast. It's dense because it is built with a certain amount of rare metal called, unobtainium. It appears to be completely constructed from metal and glass and, on the camera, it feels like the lenses I used to own for the Leica R system. How does that feel? It feels like you are using the best lenses made anywhere for any money.

Frank allowed me to put the lens on an Olympus OMD EM-5 and play with it to my heart's content. I turned 30 degrees to one side and snapped the image above. While it may not come across on the web (especially if you are reading this on your phone...) the image is crisply sharp and the out of focus areas are subdued and calm.

Frank offered to let me borrow the lens for a week or so for an extended evaluation but I'm afraid I will have to decline. Just having it in my hands created such desire that I know a week of use will make any resistance to buying it as futile as resisting being assimilated by the Borg.

If you are using the Olympus or Panasonic systems and you have buckets of cash sitting around on the floor which you don't have pressing need for you might consider evaluating this lens. It's an ultra fast (an eminently usable wide open) 85mm equivalent, has a real aperture ring (operating on the Panasonic cameras only) and has Panasonic's image stabilization built in. The image quality wide open is, to my eyes, stunningly good.

I am not putting a link to the lens from a camera store because I would feel too guilty pushing you over the edge. If you don't have the budget to spring for one right now and you are weak when it comes to luscious gear then do not handle this lens. If you do, and you are partial to short telephoto lenses, the probability that you will be drawn into its gravitational field is high. You've been warned.


Posted by Kirk Tuck, Photographer/Writer at 11:41

That was not very kind of you!


KT,
Yes I get it. Don't test drive a $60K car if all you can afford is $25K -there are times you really do get what you pay for. But the level at which diminishing returns sets in is in my experience somewhere in the middle. YMMV
cheers,
Joe

The downside to owning this lens is the realization that I will be driving my 2002 Sentra for a couple of more weeks! Ah....the siren call of glass!

Doh! I now have an itch that must be scratched, I was happy with my olympus 45mm until I read this Kirk.

You're right, the Nocticron is a beast, but somehow felt light and cheap after handling the tank-like Voigtlander.

Yet to purchase any of the above but the GAS is bubbling...

Most of a my family and friends would call me a prudent person, but if I were in your shoes I would have left that Starbucks and gone straight to the camera shop.

The only thing holding me back now is that I don't own a body on which to mount it. And, I have just enough sense not to get into a new system at this time.

I admire your considerable self constraint.

"Since it's a stock car I had to use my imagination to hear the throaty growl of the tuned exhaust."

I don't have to use my imagination I have a Spintech muffler on my old Ford Ranger. It's just like being back in high school 8-D

Having owned 50mm Summicron R, 90mm Summicron R and 180mm Elmar R for my Leicaflex, I can easily know this feeling. There will come a day when I drop into my local camera store and try a 56mm Fuji lens on my Fujifilm XE1, and will then suffer the same dilemma. Word on the street/net is that this lens sings the same siren song. The 90mm Summicron changed my photographic life from one of 35mm at f/8 to 90mm at f/2.8.

I bought one. The most expensive lens I have ever owned. It might mean I will have to sell the E-M1 and "suffer" with the GX7 (which is actually superb). I love the shallow depth of field, speed and the challenge of a tighter perspective than I am used to. Is it worth it over the 45mm for me....yes, I guess, because it makes me want to shoot with it. The 45 stayed in my bag most of the time. It's a funny illogical thing.

Give up the frapuccino and go with the regular coffee. Use the money you save to buy the lens. You wind up with a great lens and never get caught with a girl's drink in your hand. Win win!

Thanks for the great blog.

First of all, nice image! I agree that the 42.5 produces buttery smooth bokeh and the focus is spot on and super fast.

Secondly, hey I know her! My fiancee hangs out with her pretty often.