Saturday afternoon walk with an ancient (but interesting) lens on an Olympus EM5.2. Walking through downtown Austin, Texas 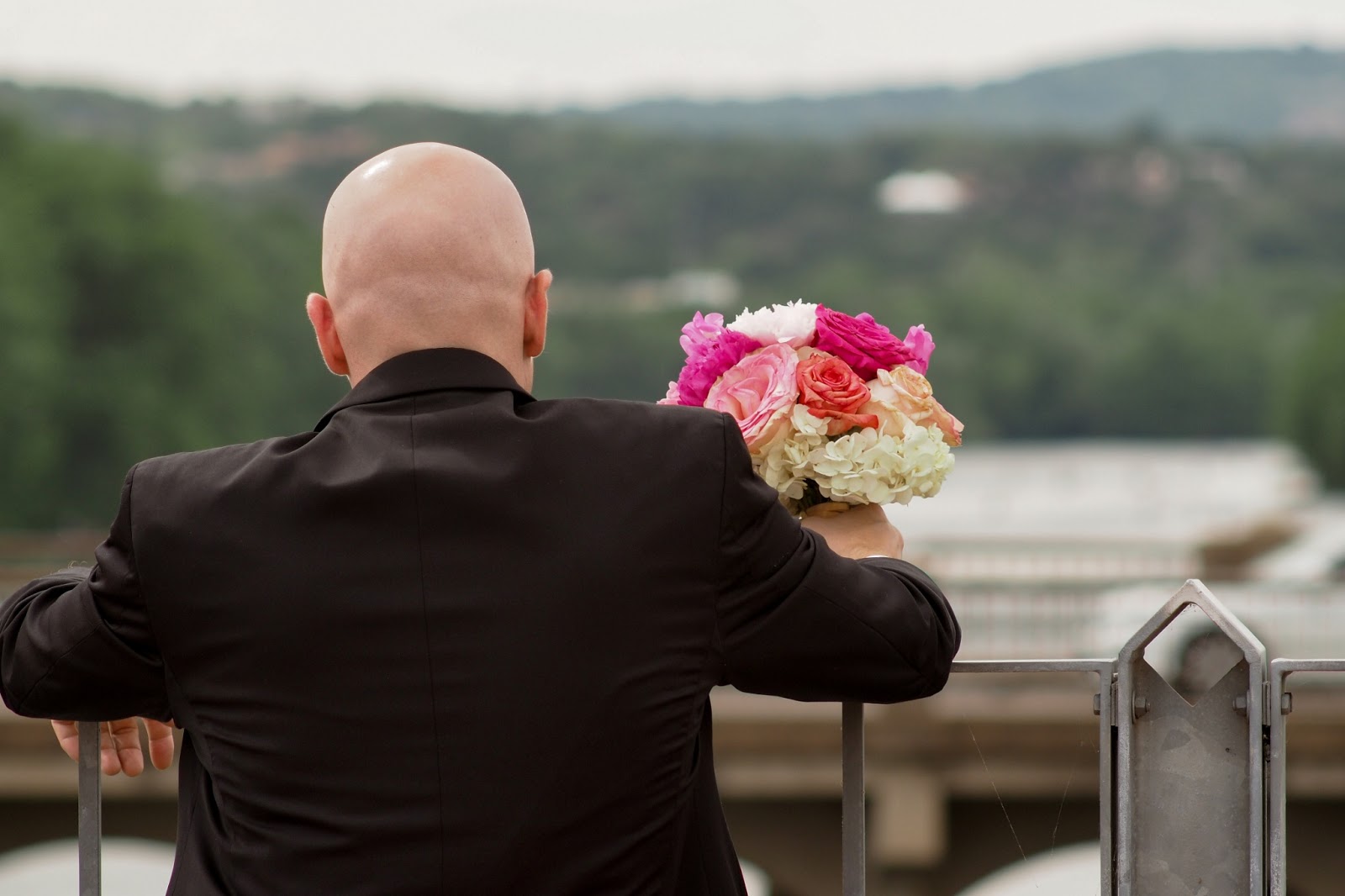 Is this bokeh or is the background just out of focus?

There's something about older lenses that I find appealing. I could describe various attributes but it would sound like I'm criticizing the lens instead of explaining why I actually like it. I have a very old Olympus Pen FT lens that's a 150mm f4.0. It was made either in the late 1960's or early 1970's. It was originally made for Olympus's line of half frame Pen cameras with their zany vertical format and the generous 72 exposures on a roll of normal 36 exposure film. But to my great joy all of these lenses will fit on (with an adapter) and cover the frame of the current micro four thirds cameras.

While I go back and forth about lens sharpness and contrast there was something very different about lenses back in the days when black and white was the dominant film stock for a lot of pros and even more amateurs. I could conjecture that the lenses were made to be a bit less contrasty in order to capture more tonal range with the idea that you could compress the range to your liking in the development of the film and if not there then in the selection of your printing paper. The Pen lenses have a softer character to them but the detail is hidden within and can be coaxed out with a bit of post processing.

I hadn't done a fun walk for a while so I grabbed this old lens and put it on the front of one of the EM5.2s languishing around the studio. I needed to drop by Zach Theatre and take five minutes of video for an upcoming event so I brought the second body with a modern, 12-35mm f2.8 lens for that purpose. The shoot was unguided by third parties and as a result was over in a flash...

Zach Theatre sits right on the south shore of the lake that runs through downtown so when I finished my job I walked across the street, over the bridge and into downtown proper. The modern lens went back into my bag and I pulled out the long, skinny optic from yesteryear. The EM5.2 is the best camera I've ever shot with when it comes to using manual focus lenses that have no electronic communication with the bodies whatsoever. The combination of image stabilization (yes, I manually set the focal length for 150mm....) and well designed focus peaking makes getting good images with longer, wackier lenses a breeze.

Every image in this post was done with that camera and lens combination. The camera was set to aperture priority and ISO 200. Every once in a while I'd nudge the exposure compensation dial but the camera meter mostly agreed with me. 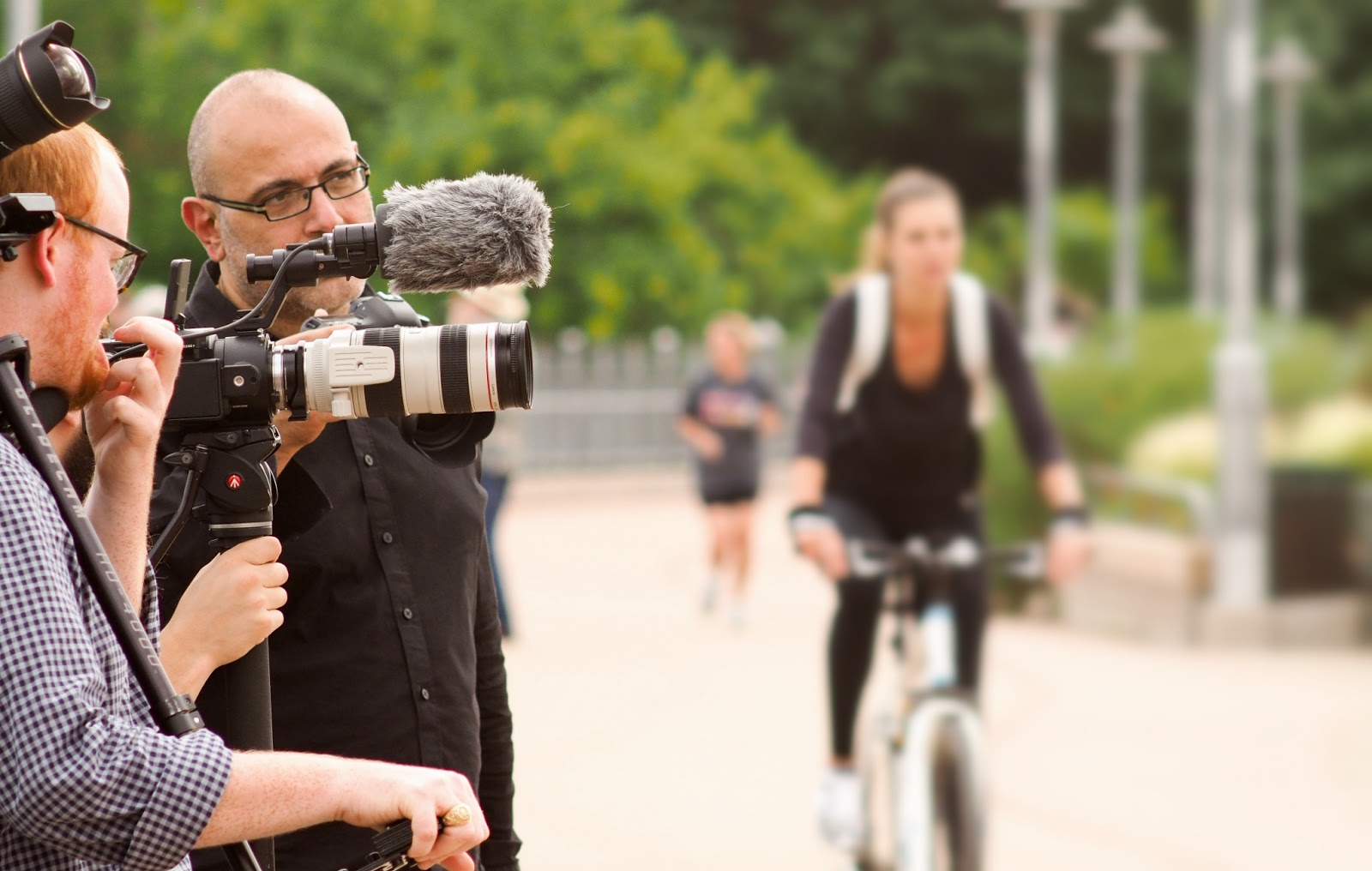 Is this glorious bokeh or ---- is the background just out of focus? (intentionally). 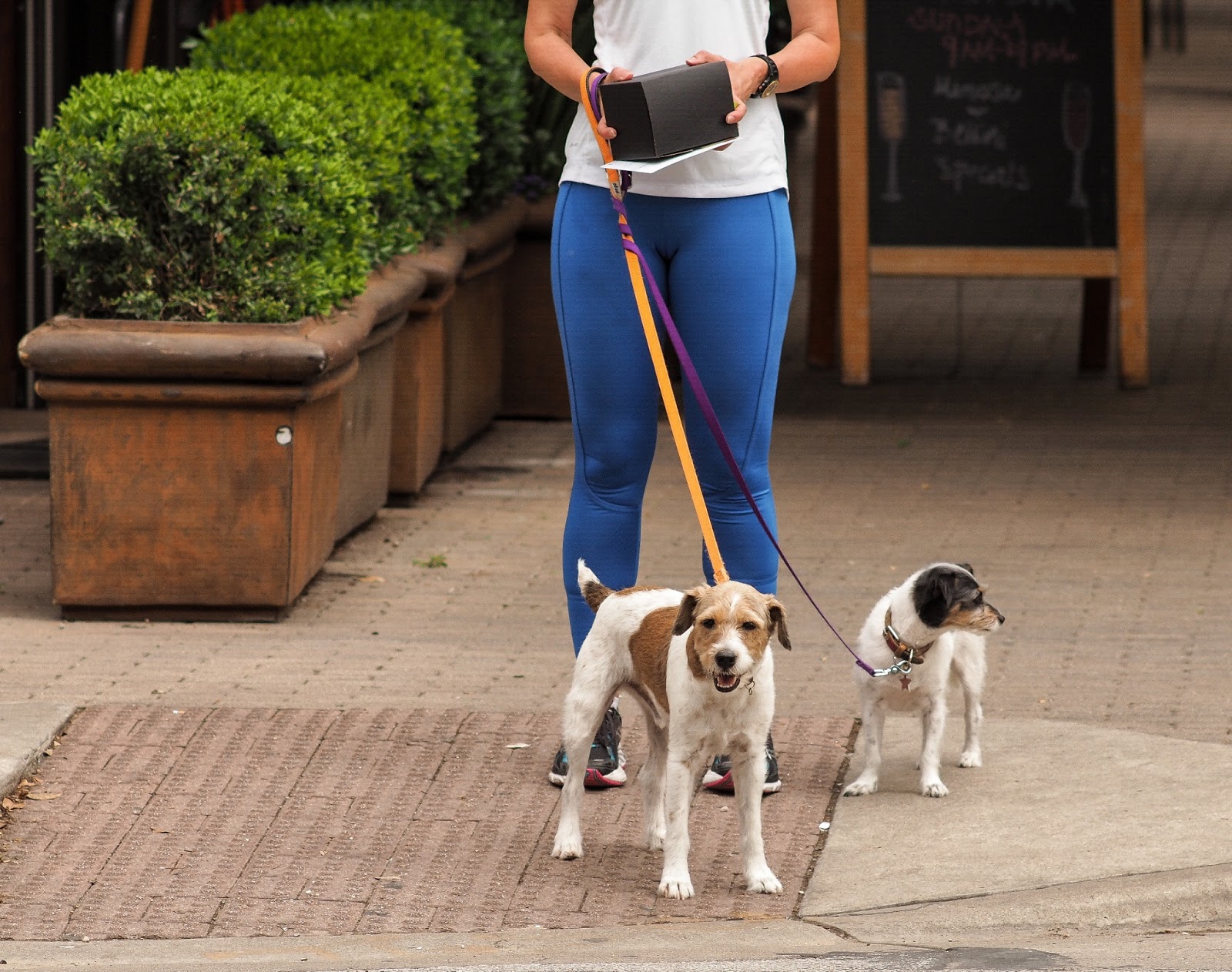 With focus peaking engaged hitting sharp focus is quick and accurate. When you use focus peaking the peaking outlines show against a slightly darkened frame as you are focusing but the minute you touch the shutter button the screen goes back to normal brightness and the peaking indicators disappear. The only thing that could be better would be if I.S. remained on even without having to touch the button. A 150mm lens on the smaller format means a lot of magnification and that means a lot of bouncing around of the finder image as you focus. Not a big deal and I got used to it quickly.

I think the lens is too soft to use wide open for general photography. It might be a really nice effect for backlit portraits or romantic shots but the lens sharpens up a bit at f5.6 and that's where I chose to park the aperture of the duration of my shooting extravaganza. I think it's just right. Not too much depth of field and just enough sharpness to make my brain believe that we're doing stuff just right.

I'm not at all used to shooting with such a long lens. The dogs just above were shot from across three lanes of traffic! That means I had to scan much further ahead as I walked down the street looking for interesting things to photograph. 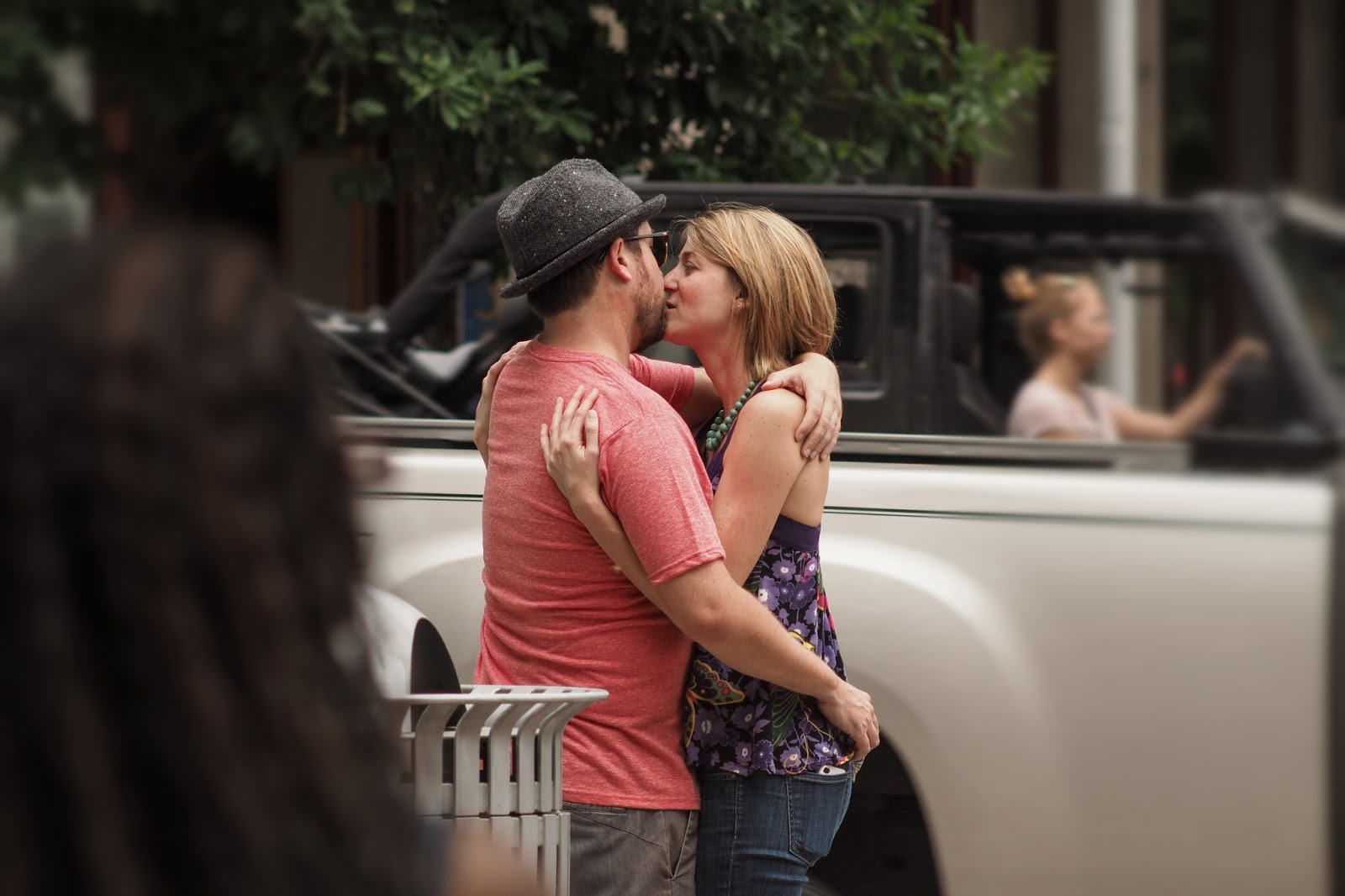 There is a pedestrian bridge that spans the lake that runs thru downtown. On the way back to south Austin I crossed the bridge and found not one but two wedding parties who were celebrating and being photographed on the bridge. I stopped to watch the two photographers and two videographers tackle the bigger of the two wedding parties. I presumed that the group of people in tuxedos and magenta dresses had come from a hotel ballroom or other venue and were just getting the group images done. I conjecture that because there wasn't any family around, just the wedding party.

The second wedding party was a smaller group and it appeared that I'd stumbled into their section of the bridge just as they were exchanging vows. The longer focal length gave me a discreet amount of distance in which to shoot.  I loved being out of their attention. The image below is so much more fun because of the compression that I think it would have been had I been closer with a wider lens. Funny how my brain starts looking for scenes that match the focal length on the camera.... 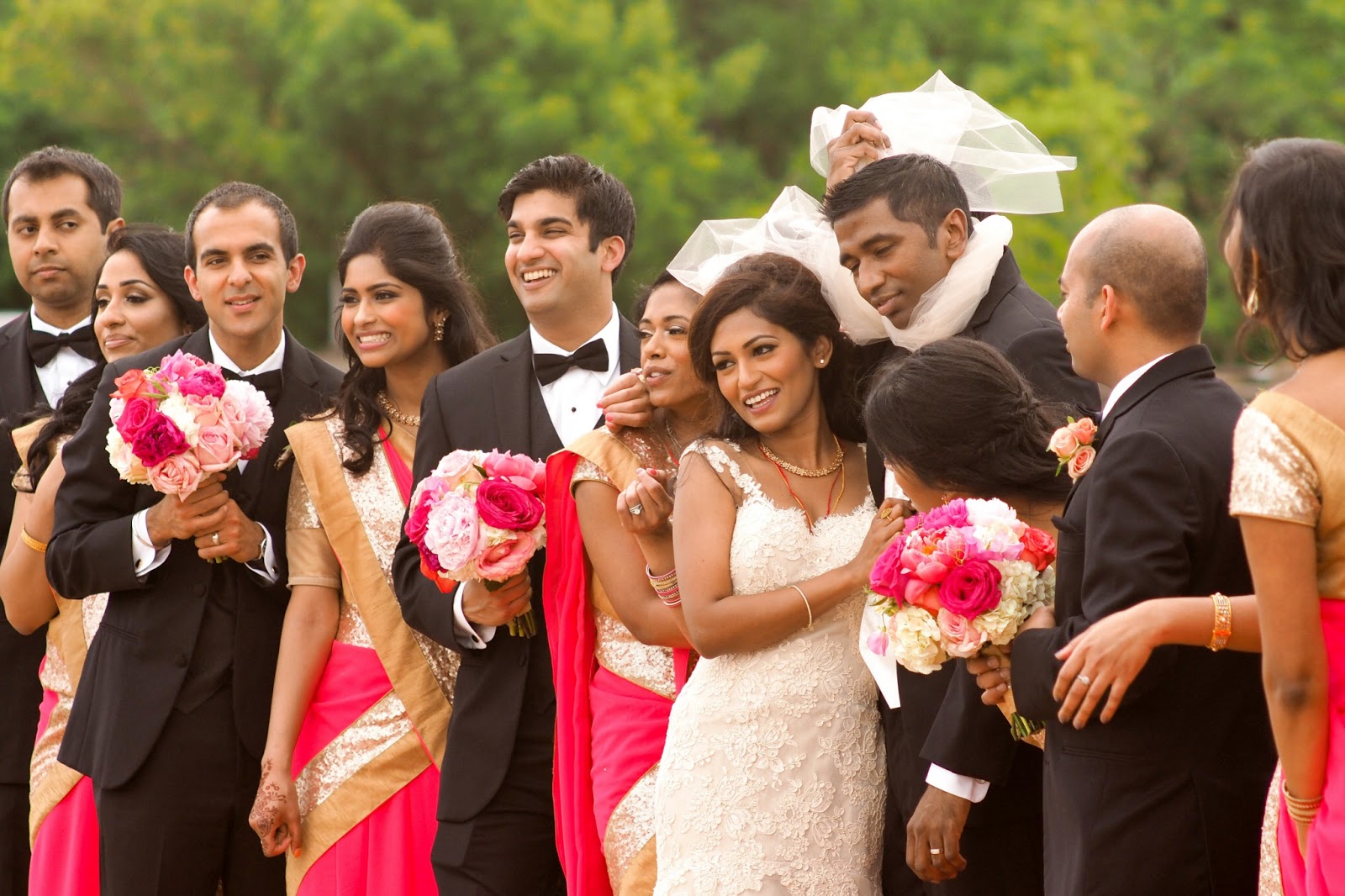 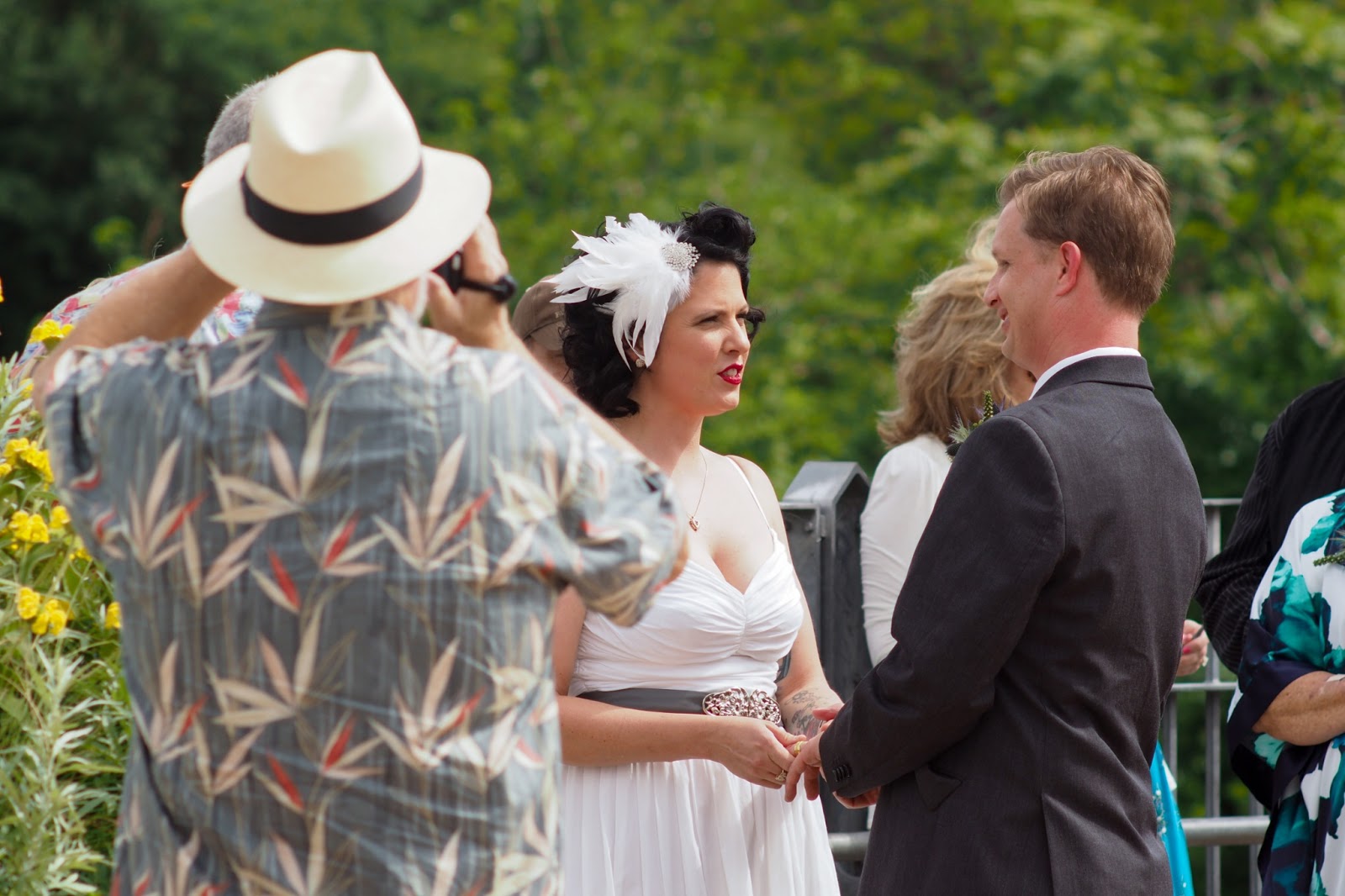 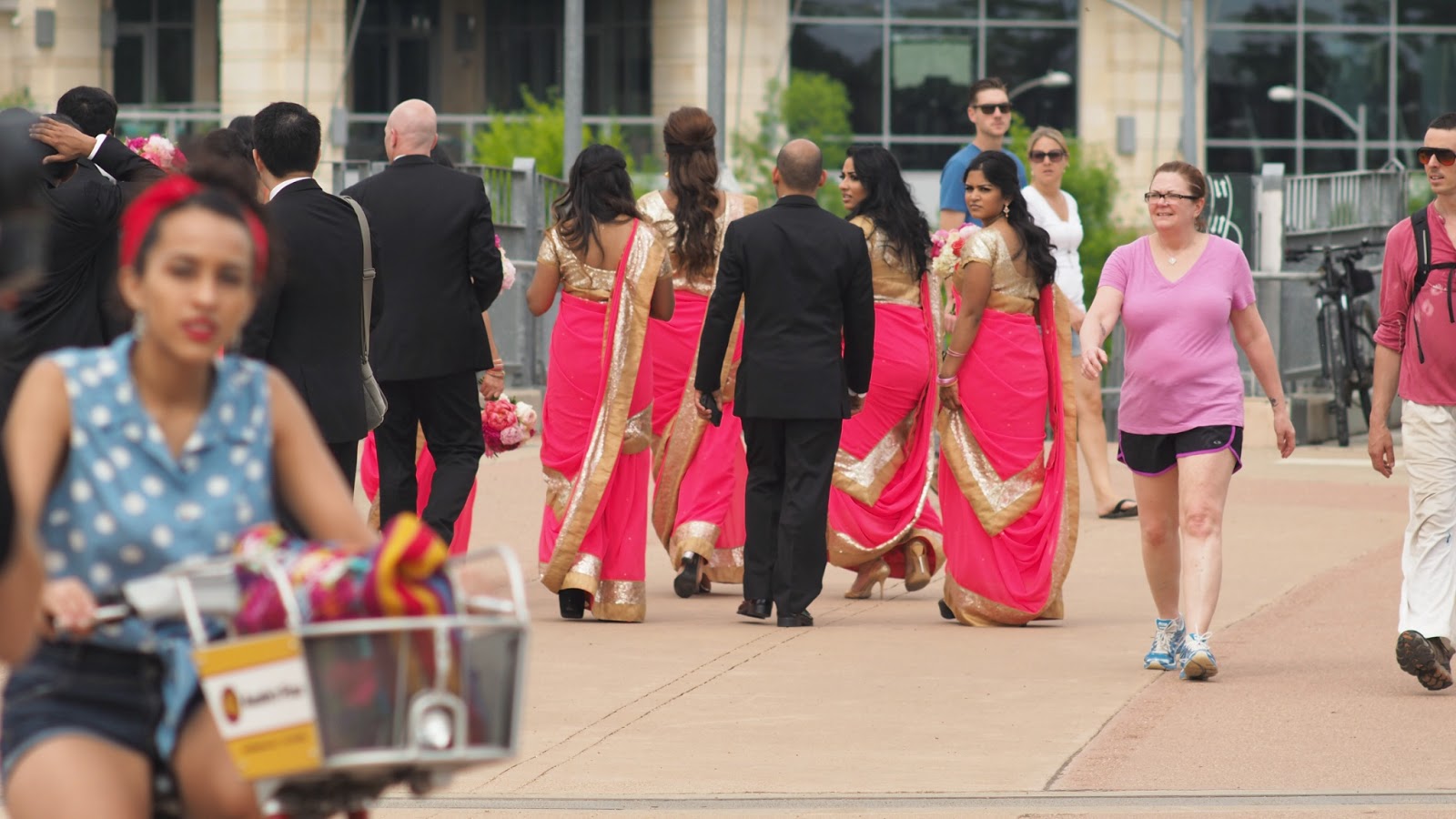 Sometimes the things I love about certain photographs are really just fragments of the photograph. For example, in the image just above I love the out of focus bicyclist in the foreground. It's just so out of place and unintentional. 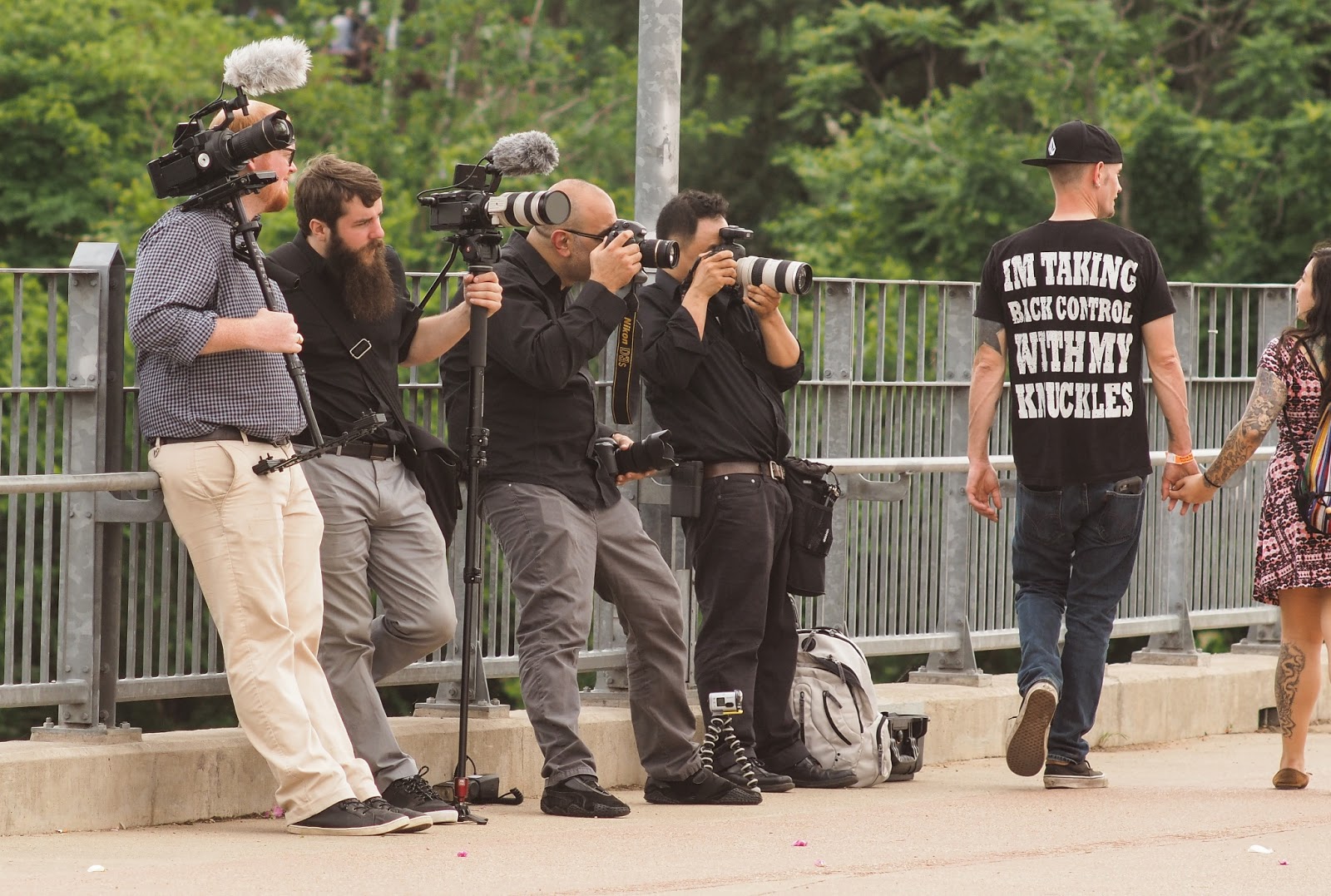 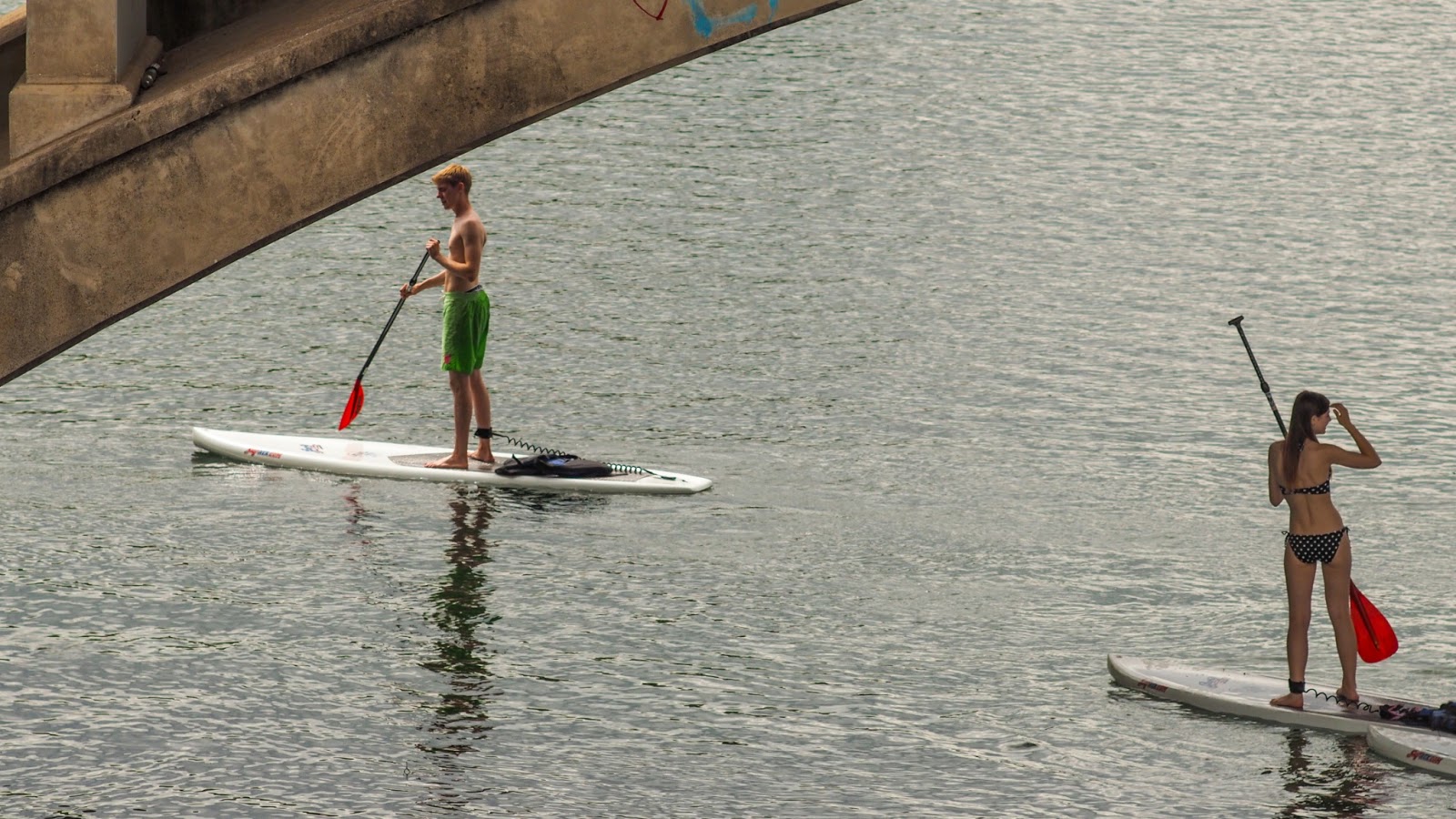 From one bridge to another one hundreds of yards away. 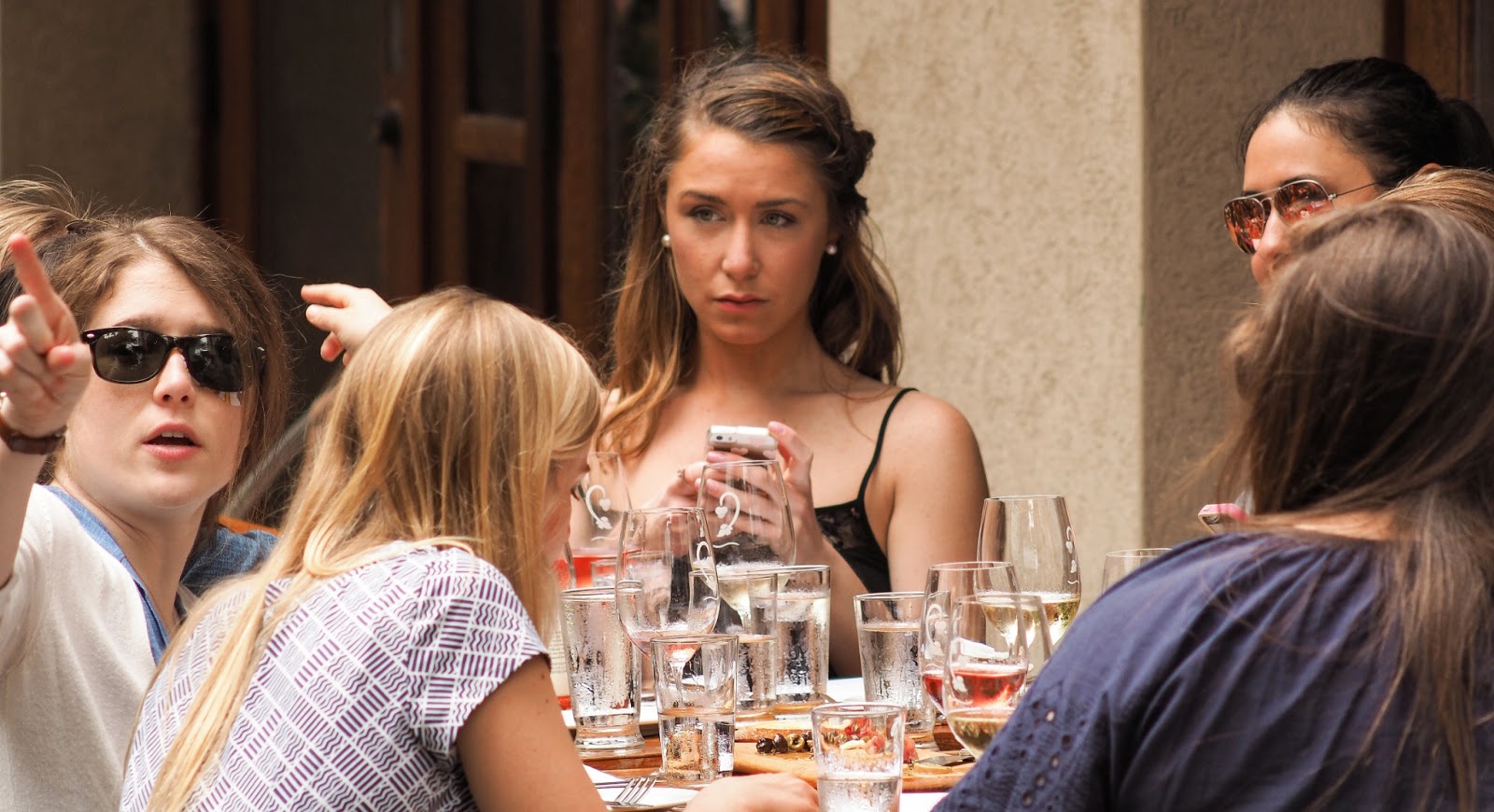 At the moment I was shooting for the expression on the face of the girl in the middle of the frame but in retrospect what I really like is the look of all those glasses on the table, nicely but subtly backlit. 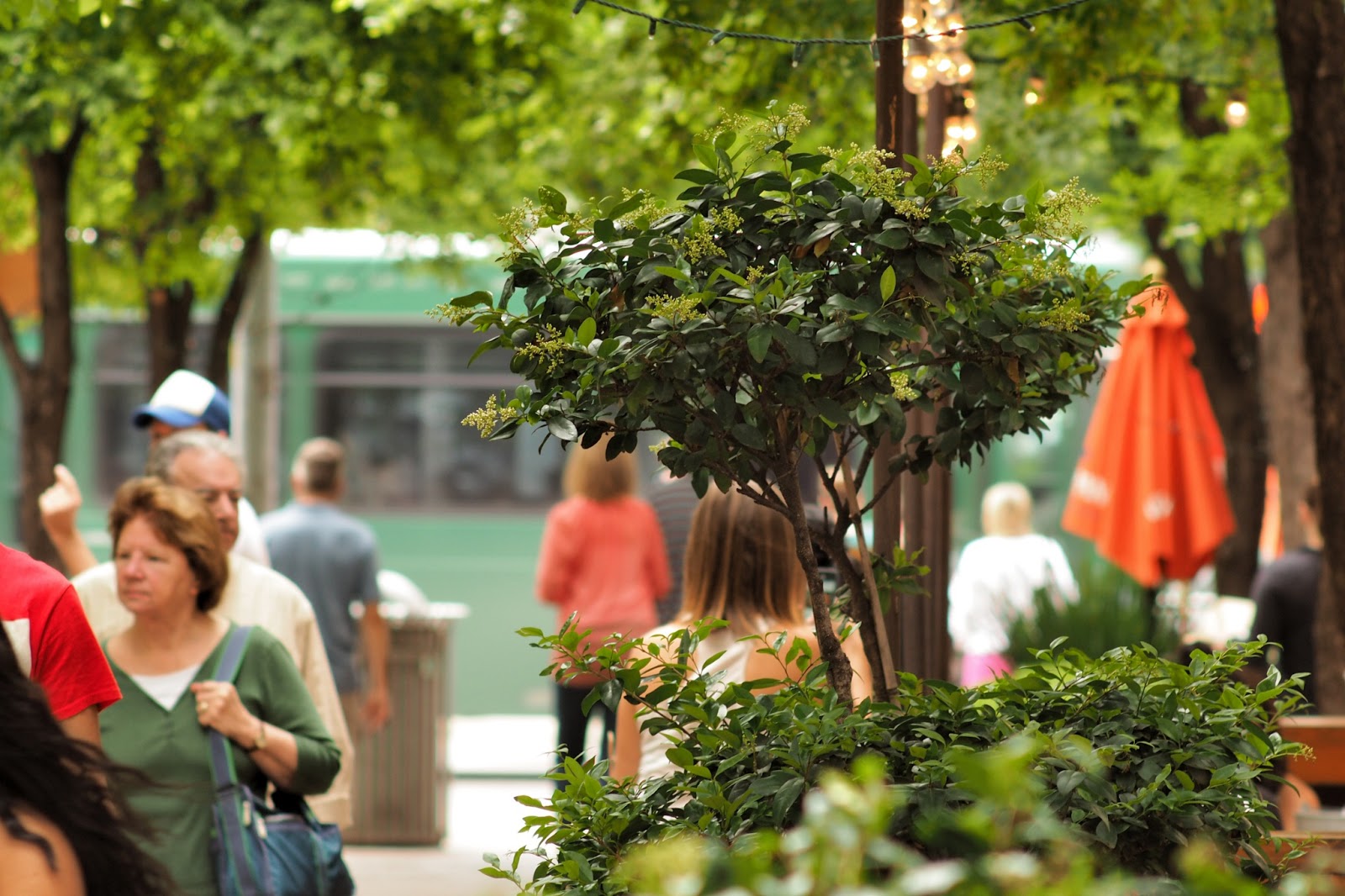 A nice urban scene just waiting for something interesting to be dropped in... 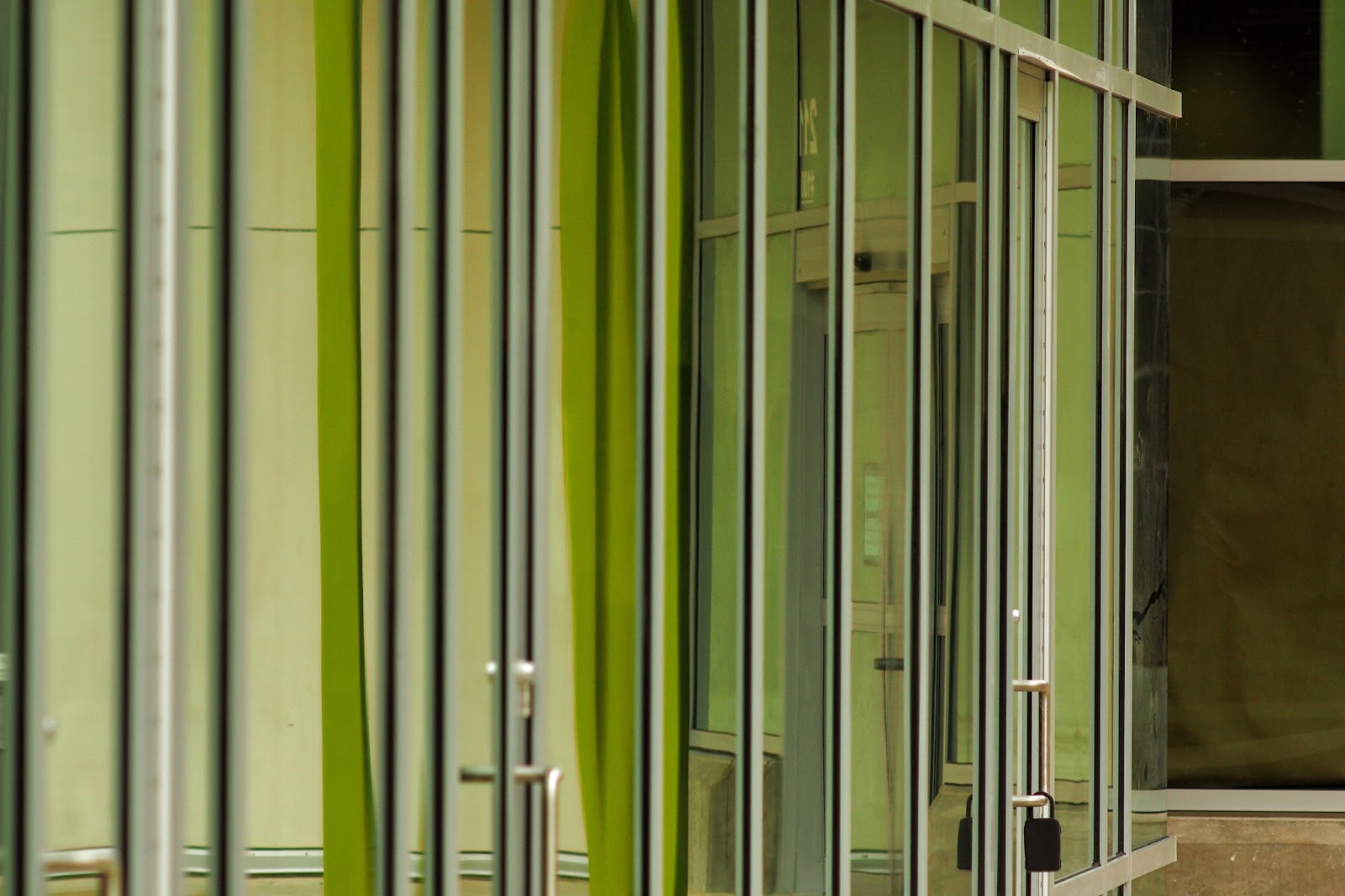 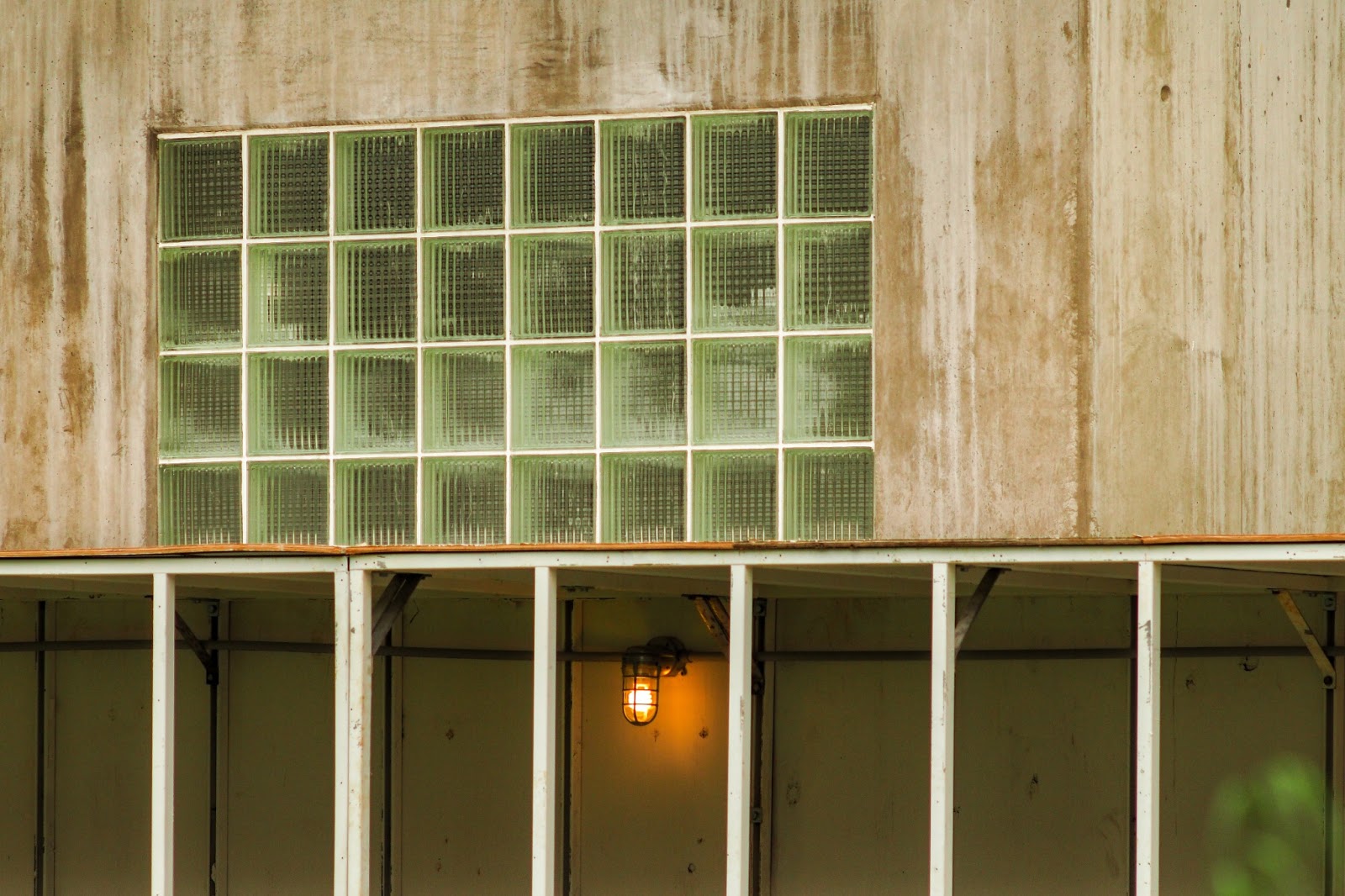 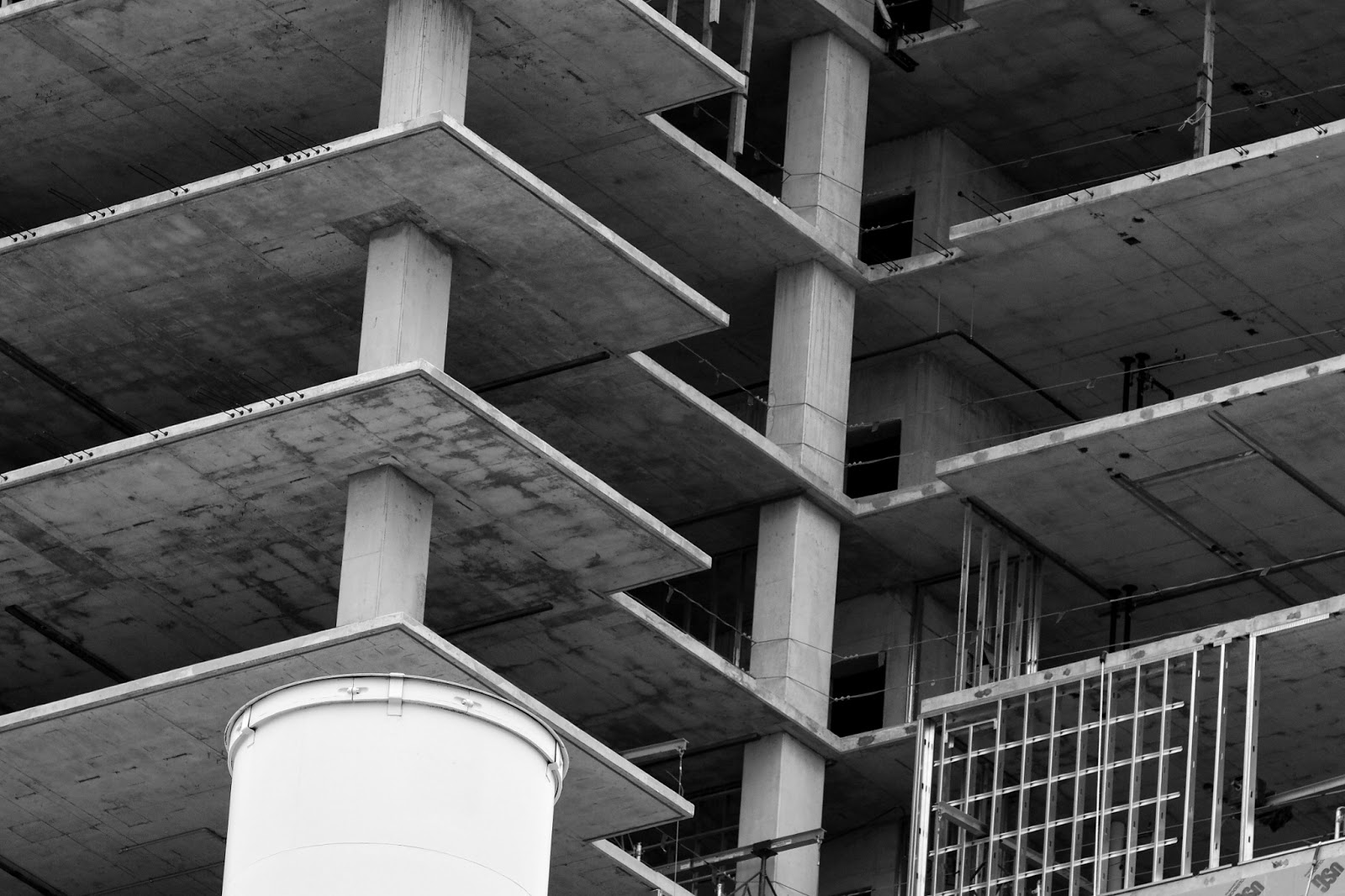 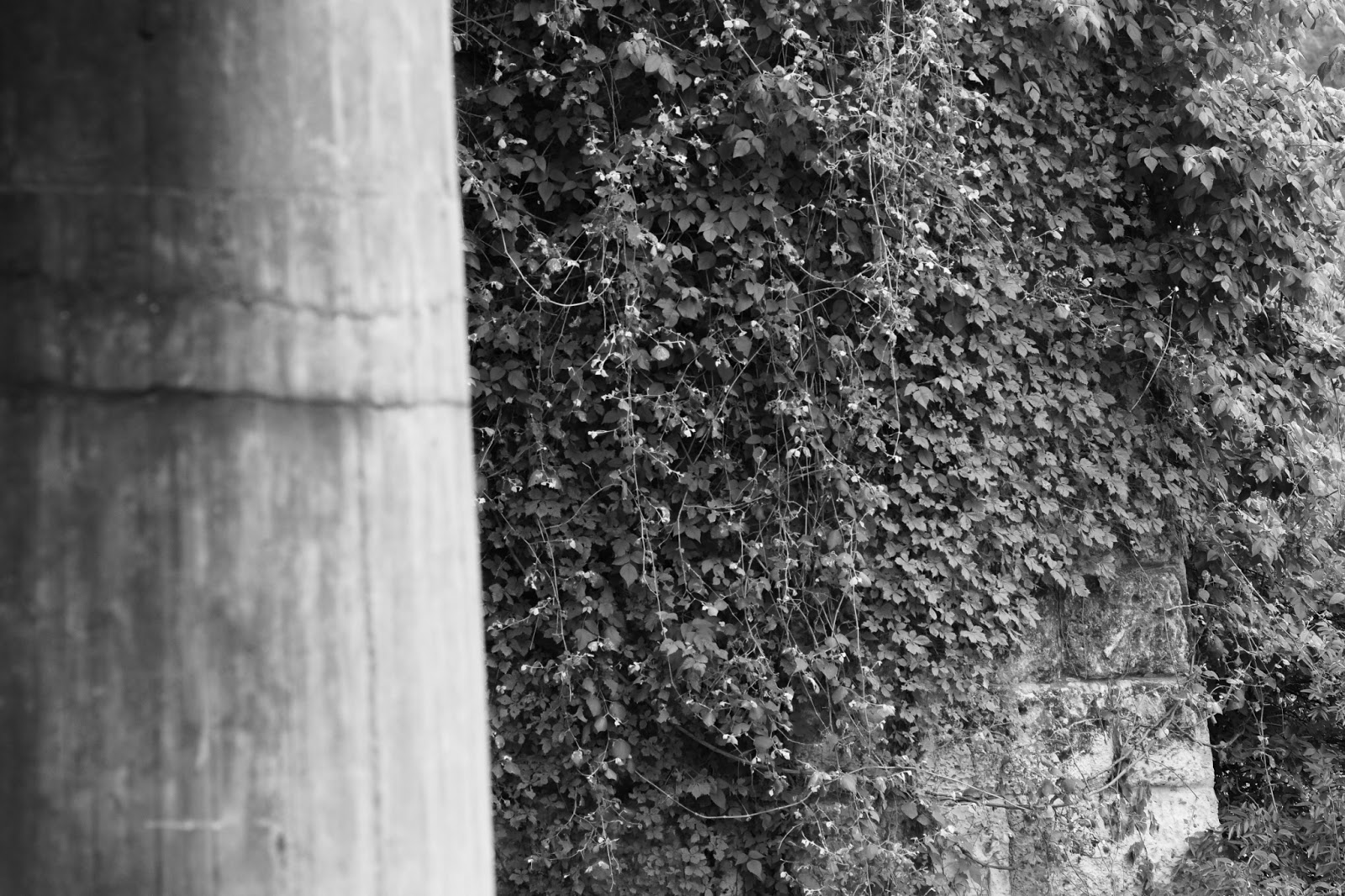 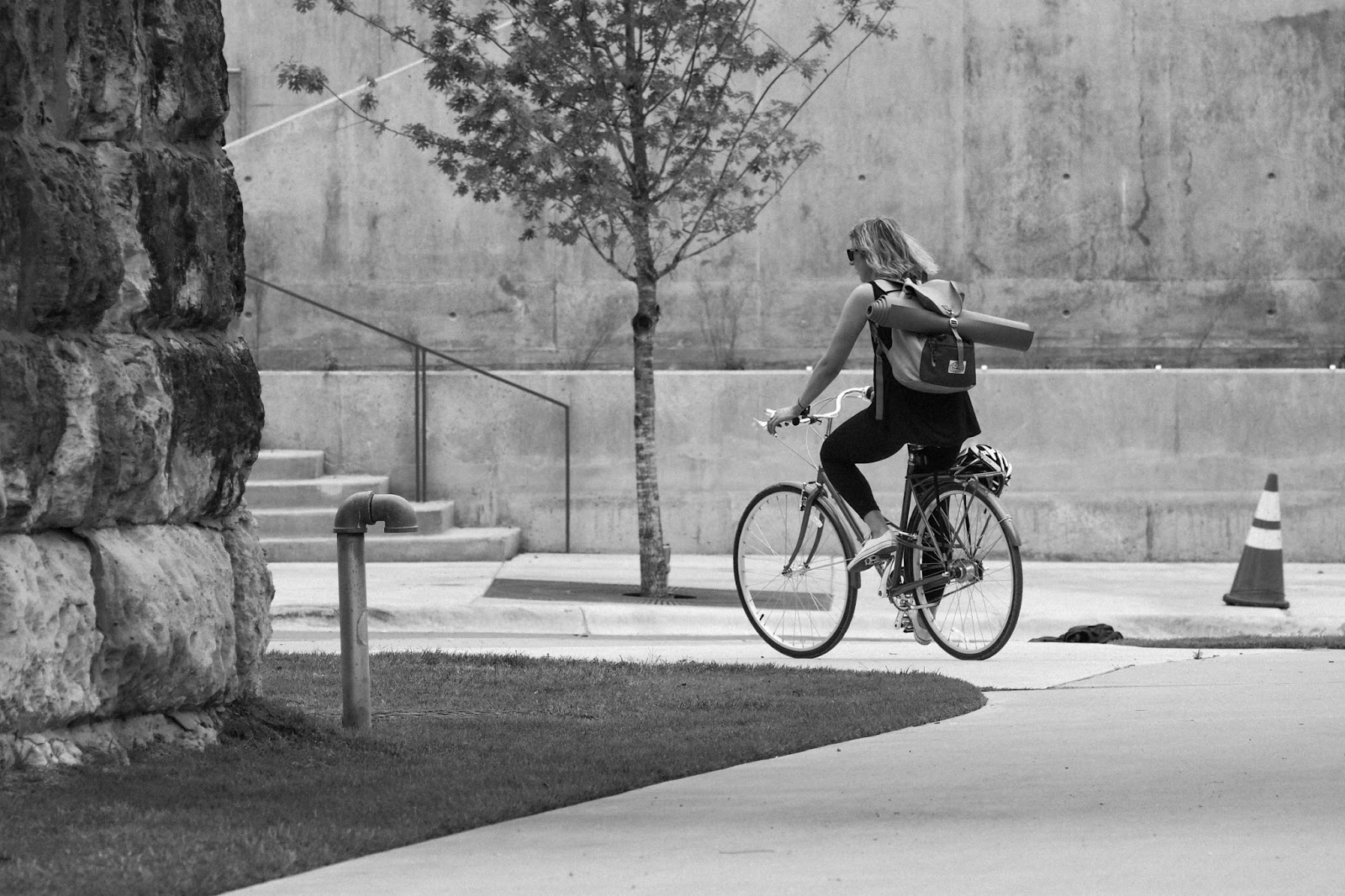 There is one thing that I found to be very, very nice in both the original EM5 and the EM5.2 and that's the monotone setting in the camera. I use it a lot and usually I choose the green filter setting when I am shooting outdoors. It seems to render tonal values correctly. As of this moment these cameras are my choice (over the Nikons) for black and whites that start their lives as Jpegs.

Work Note: The printed annual report is not dead. We are starting an annual report project in the middle of this coming week. Numerous locations in Texas and lots of expansive landscape style photos. There will be a mix of people shots but the wide, graphic shots dominate this one.
I can hardly wait to drive around, maybe there will be BBQ.

Posted by Kirk, Photographer/Writer at 19:13 8 comments: