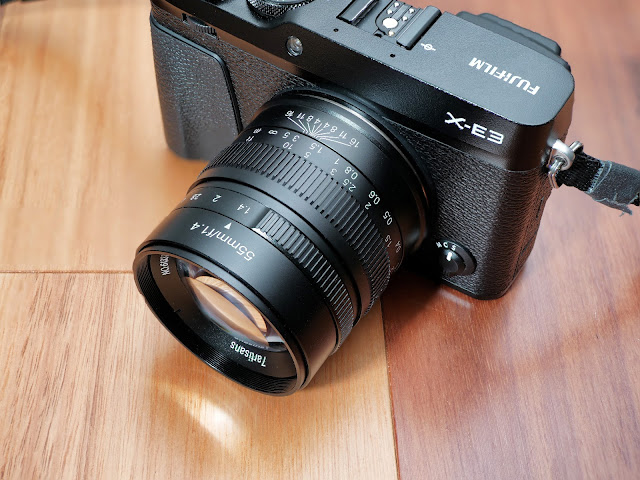 Around here there's a never ending curiosity about 50mm lenses. Not 50mm equivalent focal lengths; just lenses in the 50-55mm ballpark. On a full frame camera they do one thing and on a smaller sensor they do something different. I'm working on a small stash of eccentric adaptations for both of my camera systems but the system that seems to have the energy this month, and the hunger for 50mm lenses, is the Fuji and I'm playing with a rich treasure trove of lenses I can adapt, or use directly, on the Fuji X cameras. (Go mirrorless, go focus magnification, go EVFs!!!).

So far I have the Fuji-cron 50mm f2.0, an adapted Contax Zeiss 50mm f1.7, a Kamlan 50mm f1.1, I'll fudge it a little bit and allow the Olympus 40 and 60mm Pen FT lenses, an adapted Nikon 50mm f1.1.2, and now, the latest arrival: The 7Artisans 55mm f1.4. It's supposed to have a zillion aperture blades for yummy (real) bokeh (not just shallow depth of field; which is an entirely different thing....) and it's all metal and glass. I first saw it on Amazon.com but the site was so wishy-washy-ness about their ability to deliver it before the holidays that I did a quick search and sourced one at B&H Photo & Video. It came to the office this afternoon; two days early.

I haven't had time to go wring it out on an extended walk and I don't have a pressing artsy project on which to give it a go but I can make a few observations about the look and feel of the lens. It's small but dense with no rattles or shakes. Since there is no automation and no image stabilization there's really nothing to bounce around inside. The finish is nice and the focusing ring turns easily enough but it also nicely damped. I made a few casual, handheld shots of thing three and four feet away that were festooned with small type and the lens seems to resolve whatever is in focus pretty well.

I've got it (obviously) on my X-E3 and, after swim practice tomorrow morning, I'll take the rig out for spin and see if it really does earn those five stars that early adopters/reviewers have awarded it on Amazon. It's not really rocket science to design and produce a conservative six element, five group Sonar variant lens in 2018, and to polish its performance with some decent coatings. If it's not perfect I won't cry; the lens came well packaged and in a nice box and cost, brand new, a whopping $119. But if it works for portraits...... 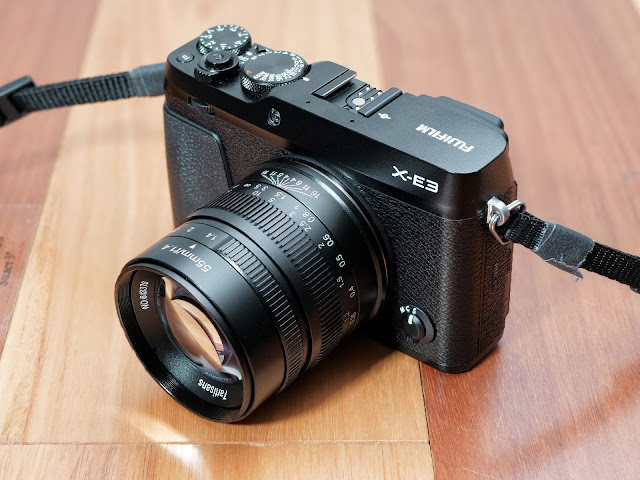 Posted by Kirk, Photographer/Writer at 18:30 4 comments: