I hereby dedicate the next two weeks (whenever I have nothing else to do...) to the cleaning and organizing of my studio/office in anticipation of the new year. 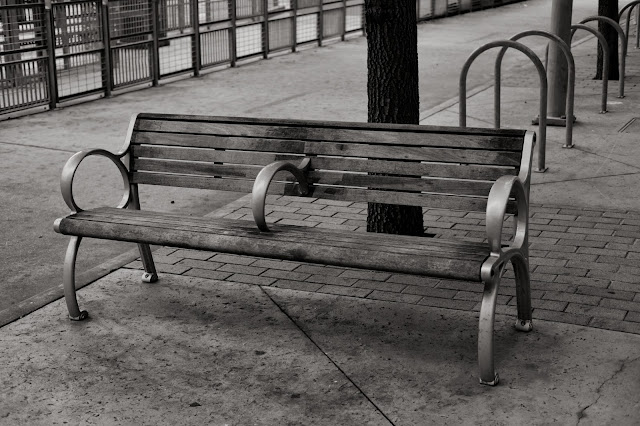 black and white mode in the Fuji X-E2.

Stuff just builds up over time. When you can't see the surface of the top of your desk it's past time to clean off the desk. When you can't print with your inkjet printer because it became the convenient flat surface when sorting out portable hard drives then it's time to free the printer.

I mostly used my office/studio for two things in the last six weeks; I used it as a way station between out of town assignments and I used it as a place to do intense post production and to charge camera batteries and flash batteries. Each assignment was a bit different and so the contents of cases got dumped on the floor, regularly, and rearranged. Sometimes new stuff got into the cases and sometimes lots of ill considered stuff ended up on the floor. Jettisoned by recent experience.

I've been living in the film past when it comes to hard core gear like tripods and light stands. I'm getting rid of all the old stuff. It's creaky and on its last legs (don't conflate us!) and it looks shabby when I'm out shooting in someone's brand new headquarters. I don't want my gear to carbon date me so much. I'm banishing the light stands that are sticky to open. I'm getting rid of the background stand set that has bent legs, sometimes spontaneously diassembles itself, and has a crossbar that has to be secured at each use with gaffer's tape.

I have a stack of four Apple laptops which cumulatively span twenty years of service. None of them can be updated to the latest operating systems and they just sit on a shelf reminding me of all the time we spent together and how much work flowed through them. But to be nostalgic for your collection of laptops is a bit daft. I will confess though that I can't quite come to grips with getting rid of the original Blueberry iBook as I'm certain I'll need to use it as a prop in some period piece short movie I'll want to make the day after I get rid of it.... the rest will soon be recycled.

All the drives I use with the computer are now USB3 so what the heck am I doing with a bunch of USB2 hubs and all the attached wiring? Those old ones are on the floor now, replaced by a newer, brighter and faster hub.

And what about the Tenba heavy duty stand case that's been relegated to storing old photo umbrellas for the last 22 years? It was a great travel case for lightstands, tripods and assorted long, heavy stuff back in the days when airlines had fewer restrictions on size and never thought of charging by the ounce for baggage... Now, well, it's just been sitting there like a short Darth Vader presence, tickling my mind with the idea that someday we'll need to cram six or eight lightstands and a fat tripod into it and zoom off into the photographic fray like the old days. it's only truly functional if you need to bring lots of heavy duty stands and it should only be used in conjunction with strong assistants. It's got to go.

Looking around the studio I can't imagine what I was thinking or how I managed to acquire (over time) 12 light stands when I only need five, at most. Some of the odd ones have to go. Why did I think nine tripods was better than two tripods. Yes, some of those will have to exit as well....

And while I'm on a roll it might just be time to get rid of the desk and the chair. That way I know I'll spend a lot less time sitting in front of the computer and shopping on Amazon....

In the cleaning mode and can't be stopped.

Posted by Kirk Tuck, Photographer/Writer at 10:21

I sold my heavy-duty Bogen boom and two heavy-duty Bogen stands a year or two ago. They were only useful in the studio, and I haven't had a studio for some years. I'm down to six light stands, which is about right. I have never been big on tripods, so only have two.

I need to find new homes for a Porter case, a Technal 16x20 dry-mount press, and two Novatron strobes. The Photogenic can stay a while longer. What I really need in another Neewer Vision 400. :o)

Hope you don’t have an enlarger lens, stand & trays tucked away in a corner cupboard :~)
Good to have a periodic clean out. It’s funny how as humans we accumulate stuff - although it is a bit of a first world problem - maybe because we paid for it, or get sentimentally attached. Hope you can sell or recycle as much as possible.
Cheers,
Not THAT Ross Cameron

With the help of my sales associate at the camera store I was able to convert a bunch of stands, tripods and modifiers into a Fuji X-H1 with a battery grip. Just what I wanted to get myself for the holidays....

Good luck with all that. I hope you can maintain focus and perseverance better than I.

Maybe your example will show me the way to true enlightenment.

LOL - So did the TOP review pique your curiosity? Just so long as what gets acquired doesn’t take up as much space as what has been disposed of.
Is that now 3 Fuji bodies? And counting :~)
Looks like being a very Merry Christmas at the VSL staff party.
Cheers,
Not THAT Ross Cameron

Oooh !! Lovely camera. Interested to know how you get on with it. X-H1 has a much chunkier design and of course has IBIS. When I tried one the main thing that struck me was the shutter release - it is completely different to other Fuji's, with a very slick and sensitive touch. I thought it one of the nicest shutter mechanisms I have ever encountered, but was mindful of how different it is to my regular X-T2.

Dave is the better mathematician. X-H1, X-T3, X-E3, X-E2. I think we'll hold off on getting more until I really need them. Yes, I still have every scrap of my Panasonic and Olympus gear; none were sacrificed to acquire the Fujis. We'll boil the straps for soup before we get rid of them...