There is always something affecting the worldwide camera market. Will it be the shortage of semiconductors this time? 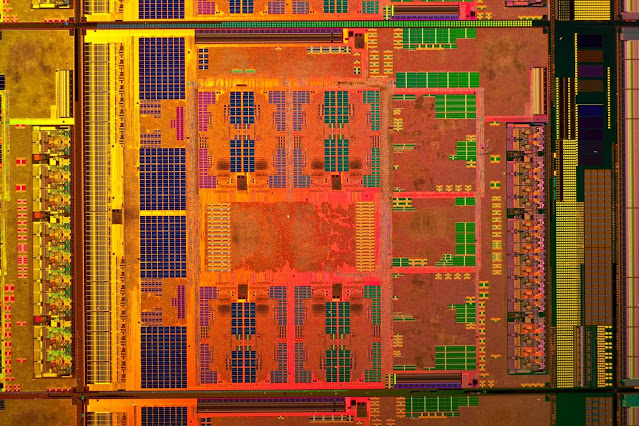 One of Kirk's chip die photos done for Motorola back when they were all about
semiconductor production and had large fabs working around the clock in
Austin, Texas to supply all kinds of industries.
There are two scenarios that give me pause right now. Both are related to the production of high tech gadgets as well as mission critical tools like cameras. One is a world wide shortage of many different kinds of micro processors, micro controllers and various other families of semi-conductors. Ford and GM have both announced slowdowns in production of new vehicles because they are unable to source the semiconductor parts they need to complete vehicles. It's only a matter of time before the same shortages hit Tesla, Dell and Apple. I presume the short supply is already affecting high end camera production which is largely about assembling silicon parts together with a lens mount.

It's easy to predict that we'll start having back-order issues in short order. It may be one of the reasons behind the two month backlog of Leica Q2 cameras. It may already be the primary reason camera makers like Panasonic have fallen behind on lenses already announced on their product roadmaps.

But a bigger concern in the long run is the increasing aggression of the mainland Chinese government against Taiwan. The Chinese military have stepped up all manner of harassment against the tiny island nation in their quest to assimilate it back into communist control and ownership. But some of the biggest and most advanced makers of semiconductor components are located on Taiwan. Should open hostilities break out companies like Apple, and other computer makers, and car and truck makers, will run out of supply for parts for new laptops, iPads and, eventually, phones. Not to mention Ford F150 trucks; which would cause widespread panic in Texas.

Any disruption measured in time longer than days will roil the markets for just about all the fun toys we love. From cars to TVs, to our beloved cameras and lenses.

I'm not sure how firmly this is showing up on most people's radar but in the case of a company like Apple a month long glitch in critical supply would cause panic in the stock market which might retard any economic recovery and cause a net loss of hundreds of billions of dollars of investor capital. And a lot of jobs.

The current shortage seems to have stemmed from the quick shut down of demand for the first six to eight months of the pandemic. Ramping up for increased production is complicated and takes time.

But a shooting war between China and Taiwan would result in a disruptions the likes of which we haven't seen in a long time. And the fall out will include a lot more than delivery times lines for cameras and lenses.

Just something to think about. As if we don't have enough to worry about....

Am I missing something? Do you have additional (factual) information that might make me less anxious about the whole situation? Share it please.

Posted by Kirk, Photographer/Writer at 13:21 17 comments: