The thrill of editing and post processing. What a nifty way to compare lenses and camera systems. Especially for use in dicey situations. 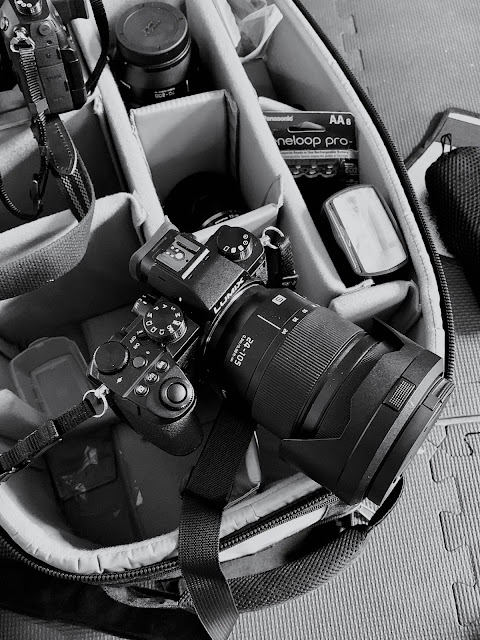 Corporate meetings and events can be fun and even challenging. Some parts are basic social intelligence. Getting people to pose at cocktail receptions, and cajoling CEOs into happier expressions without stepping over the lines. There are the uncontrollable parts of the events where you might follow along on an off road adventure or an art gallery tour and try to capture people authentically having fun while mostly disregarding the fact that they have a photographer in tow. And even though it seems like the predictable and easy part I always find the "speakers at the podium" to be challenging.

There are two reasons for this. First, you are dependent on the lighting provided by the stage designers and A/V crew. As a photographer I'm happiest with big, soft light sources but you won't find them on most conference stages. Instead you'll find spot lights from the back of the ballroom or maybe assorted open face lights on a truss out in front and above the stage. If it's the former, which is pretty much standard at smaller venues (think 300 attendees instead of 3,000), you can count on the lights being right on the edge of acceptable for overall photographic exposure.

Add in a speaker with a sensitivity to strong lights, one with the clout to demand that the lights be dimmed down, and you have an interesting session of podium-tography on your hands. And if the lights don't get you the rapid blinker speaker lurks out there. And the stage pacer. And there's always the note reader who spends his or her whole time on stage looking down at their notes and, erratically and briefly tries to make glancing eye contact with one or two people in the audience. Then there are the "rounds".  The easiest big room to photograph in is one with theater seating. Rows and rows of seats on ever ascending levels. But the "rounds" seem to be the preference for hotels and convention centers. "Rounds" refers to round tables that seat eight. The banquet people put them as close together as they can to maximize the number of attendees they can put in a ballroom. Of course sitting at round tables means that half the people in the room have to turn their chairs around to see the stage. It quickly becomes a mess of stretched out legs and chairs in the aisles. An obstacle course for the photographer who needs to move around the room to get good vantage points from which to photograph the speaker on stage.

If the event photographer is especially lazy and well equipped I guess he or she could set up a big tripod at the back of the room, centered, and shoot with very fast, very long lenses. That gear and a comfy chair might seem the way to go. I resist it because if photographers use too long a focal length lens from too far away the smashed compression makes all the photographs look flat and lifeless. I like to work at multiple distances from a speaker to get a collection of images with different apparent depth. It just seems more interesting.

Much earlier in my career as a corporate event photographer I was nervous about getting great photographs. When we used film cameras the whole system was very slow. You really could only count on film with ISOs of up to 800. And you pretty much had to nail your exposures. And you had to re-load after each 36 exposure dose. Of course you would probably be rewinding film just as the CEO sprung a big "reveal" on the audience. Hope that second camera still had some frames left, right?

Now, with digital camera systems and some decades of experience under my belt I am no longer nervous about getting "the shot." I see things differently now. Nothing is really that big of a deal anymore. Most of my clients who have survived the last recession and the Covid shutdown have been desensitized to self-induced stress. They just want to get "representative photos" that "give a sense of the event."

I see conferences with day long speaker components as a fun and lively testing ground to see what different lenses and cameras, and formats can do when presented with consistent lighting and subject matter. Last week I staged three different cameras on a chair at the back of a big ballroom. I'd find a nice angle for the speaker on the stage, grab a camera and shoot some frames. Then, since most presentations are about 30 to 40 minutes, I had ample time to circle back to my "camera hoard" and change out models or lenses or both.

Over time one system presents itself and the "right choice." But perfection for all frames isn't necessarily what I am pursuing. I like to see where the limits are for each kind of system and what kinds of compensation come with faster lenses or different shutter speeds. Can I get close to the quality of a full frame camera with a long zoom if I use a smaller format camera with a shorter, faster lens and get closer to the stage? Stuff like that.

Last week we had two days of presentations and speeches. And it was actually very interesting to me because the conference was all about banking and economics. I had breakfast one morning with the keynote speaker who, like me, was an early riser and ready to hit the breakfast buffet at 6:45 a.m. Since we were the first ones there we had time for a pleasant half hour talking about things like secondary derivatives and black swan events....

When the presentations on the stage started in the "main tent" I went for the "safety system." The safety system is the camera and lens(es) that you KNOW will get the job done in the most commonly acceptable way. The Panasonic S5 is my low light champion. I can photograph at ISO 6400 without a worry in the world. If I know everything is going to the web and nothing will touch paper and ink I'm just as happy at 12,000. I use that camera mostly with the 70-200mm f4.0 S-Pro lens. It's sharp enough to shoot wide open all the time and the range is great. From a head-to-toe shot to a fairly tight head and shoulders shot at a comfortable distance from the stage. While I can use the camera in a "silent mode" I always experiment to see if the production's LED lighting is going to cause banding. If the electronic shutter initiates banding I quickly retreat to the mechanical shutter and try to be conservative in my frame rates.

Once I know I have good expressions and a good range from a speaker at the podium while using the "safety system" I think throw caution to the wind and grab a different camera and lens. Next on my dance card one morning last week was the Panasonic GH6 with the Panasonic/Leica 12-60mm. With that camera I am comfortable at ISO 3200 and I also mostly shoot that combo with the lens aperture wide open. After I got bored with that I switched to the GH5ii with an adapted Nikon 105mm f2.0 lens. And then the new Olympus 12-45mm. Finally, I put the 90mm f2.8 Sigma lens on the Leica SL2 and played around with that. This went on for most of the program.

All the images were shot as raw files to one card and small, 16:9 Jpegs to the other card.

I got home yesterday, had a lovely dinner with B. and B. and then got a great night's sleep. I need one more good sleep to feel back to 100%. But slower recovery comes with the miles... not the miles on the car either...

This morning I sat down in front of the office computer and loaded in all of the raw files to Lightroom. There were 2900+ to start with. This represented three days of shooting plus some "atmosphere" shots from around the town of Santa Fe. My first task was to edit down the "take" to 2,000 files. When I couldn't find any more that I wanted to throw away I stopped and got busy fixing the surviving files for general use.

First I set the color profile. Then I set the exposure. Then I tweak. Then I apply the settings to all the shots with matching parameters. Once you get a good flesh tone on a stage where the lighting is set in stone you can forget having to nurse it from frame to frame and just apply that color temperature and hue setting to every image of a human in the big folder.

I don't usually add any sharpening to these event files. Most of the presenters and the general audience "victims: of candid photograph from receptions and events are not 20 year old fashion models. The demographic is resolutely "over 30" so, in fact, I generally turn the sharpening down from Adobe's preset.

How did it all work out this time? Well, as you might expect, the S5 dominated. But the SL2 with the 90mm could be impressive when it actually nailed the shot. The GH6 is a big step forward in terms of detail and lower noise when I compare it to past samples from the GH5. And the GH5ii came in right where I expected it would. It's the replacement for the G9 in my mind.

While I notice differences in all four of the cameras the truth is that with a more careful and deliberate approach to shooting we could make any of these systems work and provide images that our event clients would enjoy and be happy to work with.

The one tip I rediscovered was something I used to know when shooting with flash but forgot because it's been so long since we've shot a job that required some on camera flash. If you set your camera to TTL and your flash to TTL but you leave your ISO setting at AUTO the system will default to ISO 100 and underexpose your shots. Especially obvious if you are trying to bounce small flash off a very high ceiling. Set the ISO at something like 1600 or 3200 with an S5 and you'll have a great time shooting with flash.

Since someone will certainly ask I thought I'd answer this one: If you have stage lighting at your disposal why to you need to shoot at high ISOs? The answer is pretty easy. Speakers move around. They "talk" with their hands. They pace. I find that 1/160th of second is the lower limit I want to use to freeze subject motion. With an f4.0 lens that means you'll need somewhere around 3200 to 6400 ISO to get a good percentage of shots that are not marred by subject motion. All the cameras and lenses are well enough stabilized so that actual camera shake is rarely a concern.

I've spent my day editing the images from the raw files and am now uploading the results to a private gallery on Smugmug.com. I'll also send along a large WeTransfer.com folder to the client so they can archive their images locally. It's all part of a process.

Just for a change I'm photographing two attorneys tomorrow and I'm purposely disregarding all the gear I used in Santa Fe and taking, instead, the Sigma FP and the Sigma 85mm f1.4. It will be a nice change of mindset. Divorced from the idea of driving long distances in the car.

Posted by Kirk, Photographer/Writer at 16:55 6 comments: