Satisfied with my portable flash system. And I've used a lot of portable electronic flashes over the years... 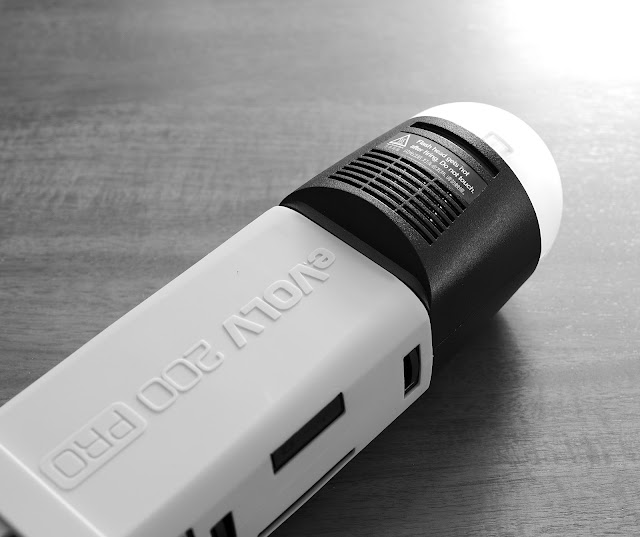 Godox AD200 Pro in a silicon body glove to prevent impact damage.
Also features the "round head" and dome diffuser.
Love mine.

There's been a big shift in lighting toward the use of more and more LED lighting. I'm a fan of continuous light sources and I even wrote a book on the topic, for Amherst Media, which was published back in 2010. That seems like ages ago. But not every type of photographic assignment can be shoe-horned into existence with one particular set of tools. Sometimes you have to take into consideration components of a job that demand a different solution.

A case in point would be photographing a portrait subject in front of a set of windows. Especially if the scene outside the windows is a sun-drenched Texas landscape. You'll quickly realize that even at ISO 100 you'll be shooting at 1/250th of a second at f5.6 or higher. You could do that with a powerful enough LED light, after all, they do it when filming movies all the time. But you'll need an incredibly powerful light source and most likely your subject will be squinting and uncomfortable through the whole process.

A simpler and time honored solution is to use flash. Electronic flash has the benefit of freezing subject motion but also allowing a photographer to match the exposure levels so that what is lit by the sun outside the windows can be lit to the same level inside. Where the air conditioning is...

I was hired to do a photograph of a new CFO for a privately held financial services company today and I knew exactly which flashes I wanted to use.

Over the last three years I've photographed executives for this company in the same location. Some in the boardroom, some in their lobby and some in both. I knew they'd want some continuity with past portraits so I set up and shot on both locations and I'll have them make the final choice. But the flash equipment? That's my call.

So, the offices are on the second floor and the easiest way to access the offices is to park out front, go through the front door of the building and then take the stairs to the second floor. I wanted to put together a lighting and camera package this time that fulfilled a number of requirements.

1. The main light would have to be powerful enough to match sunlight even if I was using the main light in an umbrella or softbox.

2. I would require three identical lights. I planned to photograph with two lights at the shoot and wanted a third light as a back-up; or in case I wanted to get fancier with my lighting design.

3. The three lights, along with extra batteries and accessories, would have to pack down into a fairly lightweight case that I would be able to comfortably transport from car to stairs to the interior offices with one hand. And without breaking a sweat.

4. The flash batteries needed to have enough stamina to keep working even if I got carried away and shot more than 200 or even 300 exposures.

5. All the lights would have to be controllable and triggered by a radio control sitting in the hot shoe of my camera. I wanted to be able to adjust both lights (or all three lights) individually and from camera position.

The lights I combined into my location kit were three of Godox's AD-200 Pro units. They are 200 watt second flashes and the thing that inures them to me is that they have interchangeable flash heads. The stock head looks like a conventional flash front end. A rectangular reflector with a diffusion panel facing the subject. This flash head also contains a small LED modeling light.

The units also ship with a bare bulb head which spreads light very evenly in all directions. I like to use the bare bulb head inside soft boxes. The one thing the bare bulb heads lack is the modeling light. There is a third type of flash head/reflector and that's the one shown in the photo at the top. It's called a "round head" by the maker and it's a well diffused, round head with a circular flash tube inside which also has magnets in the front that allow one to attach a number of different accessories to it. The accessory/modifier I have attached above is a diffusion dome which further softens and spreads light from the unit.

I've been using one round head on my main flash for a while now and, in combination with an umbrella, is my favorite light source. So, when I broke a flash tube by dropping it on the floor last Friday I decided I'd replace it with a round head instead. One advantage beyond the soft lighting and nice spread delivered by the round head (and especially when used with the dome!) is that the round head contains an LED modeling lamp that stays on as long as you'd like and also has three power settings.

It's not a bright modeling light when compared to the old halogen 150 watt bulbs that were used in traditional flash heads but it's a godsend when working in a low light environment and since the lights aren't very big or heavy the flash's LED becomes a good flash light when the shoot is over and we're packing up in the dark.

All the flash gear fits into one modest sized tool bag from companies like Husky or Black and Decker. The B&D bag I'm using cost all of $30 at Lowes, is strong and well made, and is a good  travel bag for anything except airline travel. I haven't weighed the bag with the three flashes and accessories in it yet but it's easy enough to move with single handed.

I have an ancient Tenba stand bag that's soft and light (no padding) and I've got three fairly light, aluminum stands in it along with several different sizes and type of umbrellas. That bag also hold my (must have) tripod. It's a Sirui with a ball head and it goes up over my head if the center column is extended.

The heaviest thing in my new, portable location kit is my actual camera and lens gear. Today I was carrying a Leica SL2, a Leica SL, the big Leica zoom and the Panasonic 24-105mm zoom as a back up. I also packed a light meter, a bunch of batteries for the cameras, a couple of flash triggers and also batteries for the triggers. All of this fit into my newest luggage acquisition: The Gitzo Adventurer 30 L backpack. The backpack is a bit over-engineered and I could do without the waist belt but it's nicely padded, holds everything safely and I can carry it on my back which frees up my hands for the other two cases.

With my subject at a diagonal to a wall of windows that looked out over the Texas Hill Country I positioned a flash in a 45 inch umbrella just to the left of my camera as a main light. It did a great job of illumination without a reflection in the glass and, at a quarter power (used close in) it was powerful enough to balance with daylight. The second light was used much further back along the windows and worked as a well aimed backlight or glancing side light. The third head stayed in the case awaiting its eventual turn in rotation.

In the course of shooting in two different locations and with a necktie change or two during the process we banged through 200+ exposures and got some really great expressions as my time with the subject went on.

Repacking and getting back to the car was as easy as getting in at the beginning. The total cost of the three light system, which is completely battery powered, is about $1,000. I think it's a bargain. And, with a hard case added you could travel anywhere with these lights and have a reasonable expectation that they'd work on arrival.

I arrived at 10 a.m. shot till 11 and was packed and back to the car by 11:15. When I got back to the studio each light's battery still had more than half a charge left and I considered that great since they were on for the entire time of the session and that includes having the modeling lights on as well.

I have each light encased in a protective silicon sheath to prevent breaking the rear screen (something that happened dramatically on a remote location about four years ago....) and I think that the "bumpers" or sheaths are a screaming bargain if it prevents light death.

We used the same lights on our seafood shoot on Friday. I saw the "client approved" double truck ad from that project today and I also approve. The AD200s are great. I don't sell them. There is no link.

I just seem to have used them pretty much non-stop for the last four years and thought I would shout out to them. That's it.

Posted by Kirk, Photographer/Writer at 18:00 7 comments: