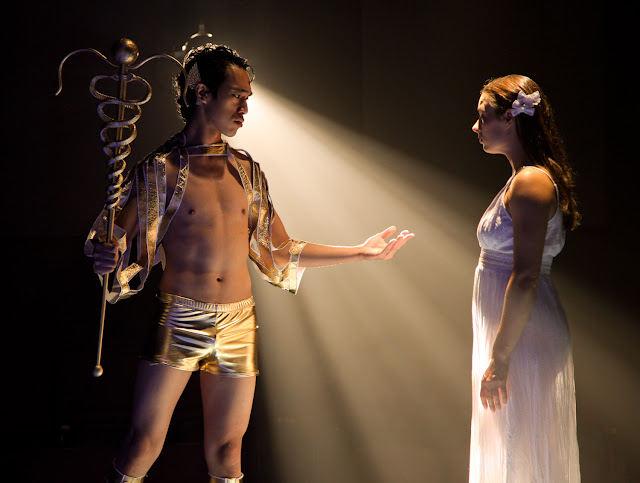 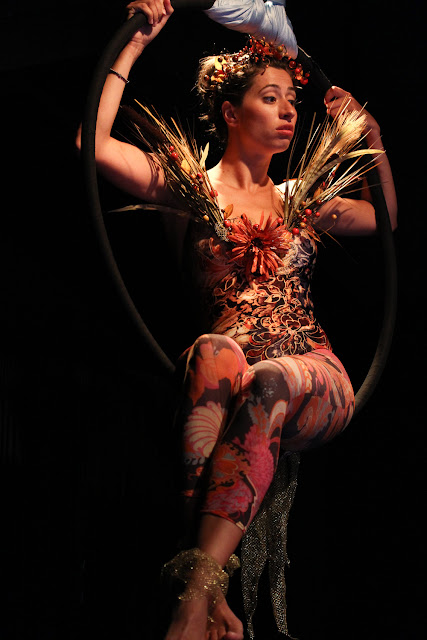 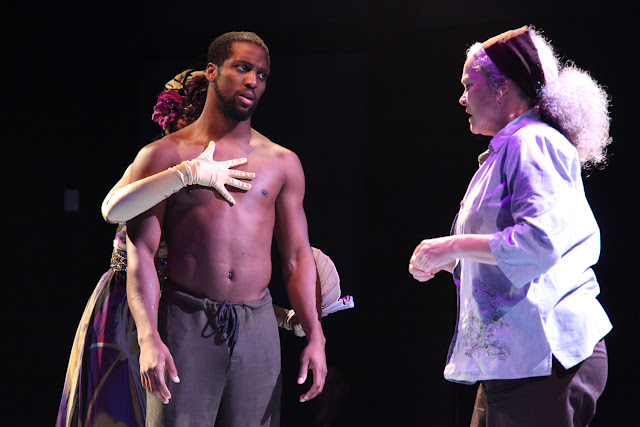 Here's a link to a whole gallery of images I liked from the Zach Scott Play:  Metamorphoses.  (Ovid, not Kafka.....):  http://gallery.me.com/kirktuck#100252&view=mosaic&sel=0&bgcolor=dkgrey

I shot most of it with a Canon 5Dmk2 paired up with a 24-105mm L series lens.  I shot the rest of it with a Canon 7D coupled to a 60mm EFS lens.  It was a fast moving play and it was hard to know where to be in relation to the actors and the action.  The play is done in the round and the action continually moves.  It's blocked to play to a 360 degree audience.  Yikes.  I'd probably have more keepers now that I've seen the production a couple of times.

And I'll probably go back again because it's that good.

I'd tell you lots more stuff about shooting this production but I don't really think there's much to tell.  You'll need to shoot stuff like this with manual exposure.  You can see all the black in the background.  It will drive your meter nuts.  You'll need to get attuned to the changing light levels and have some sort of reference area you can meter.  The African American actors chest is close to 18% gray so I metered him pretty regularly when he was on stage, using the spot setting.

You'll also have to go back and forth between auto white balance and a couple of pre-sets.  You can always tell when.  You'll need AWB when they wash a scene with color and you'll need tungsten or 3000k when they use predominantly white light.

Finally, there is a scene with full frontal nudity.  As a photographer you really have to decide in advance how you're going to handle the scene.  I wanted to make sure it was organic to the play so I made sure to always include a lot of context in scenes with the nude actor and to stay away from close-up shots which might seem exploitive.  Probably don't want to send your conservative, hell fire preacher to this one......

But I judged the whole show to be fine for my 14 year old son.  Just when we got to the one part where I had some second thoughts I looked over to see his reaction and he had dozed off.  No counting for taste. (In his defense he'd had a couple of late nights in a row before we dragged him out for some culture....)

This kind of production is a challenge to capture, both because of the changing orientation of the actors in the round and the contrasty and quickly changing lighting cues.  That's what makes it so much fun.

If you are in Austin you need to go see it.  Just staring at the lighting is a photoworkshop worth in two hours........