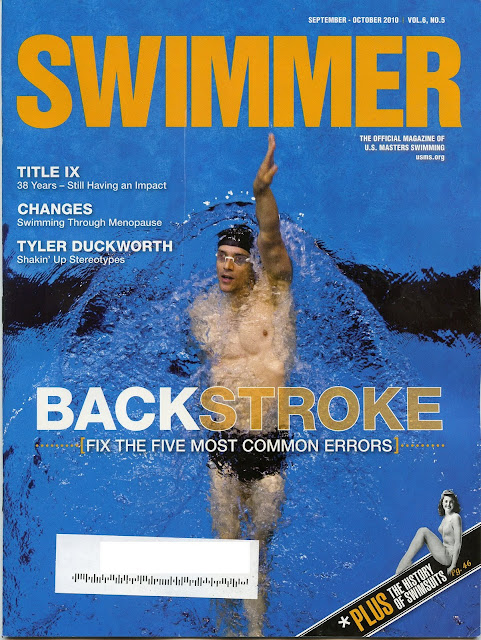 Image ©2010 Kirk Tuck.  Cover ©2010 Swimmer Magazine.  Featured Swimmer:  Tyler Blessing.
I haven't made much of a secret of the fact that I love swimming.  I love the sport.  I love the swim workouts.  I love competing.  But what's really fun is when two passions collide.  Three years ago I was approached by Swimmer Magazine with the assignment of shooting the Indoor Short Course Masters National Meet here in Austin.  Three days of non-stop, best in the world swimming by dozens of gold and silver medal Olympians,  hundreds of NCAA All Americans, and thousands of swimmers who were solid contenders.

I had a ball.  I saw lots of people I'd lost touch with over the years as well as lots of fast young swimmers.  (Masters swimmers are mostly made up of people who swam competitively in high school or college and who stay with the sport.)  I sent along the images and an invoice.  The photos ran, people were happy.

A few months ago the editor of Swimmer Magazine assigned me a project to work on with world champion and gold medal winning Olympian, Whitney Hedgepeth, it was a technique article for a future issue.  Whitney recruited one of her top masters swimmers from the University of Texas at Austin,  Tyler Blessing,  and we headed to the swim center for a morning of aqueous fun.

Whitney has been my coach from time to time and was also my kid's coach for the last two Summer seasons.  Since the coach, the swimmer and the photographer had all spent pool time together it was easy to communicate: 1.  What she wanted to show for the article.  2.  How I needed to position myself and what sort of actions would work best for the camera.  And, 3.  How we needed Tyler to go through various "right" and "wrong" actions to show the common stroke errors and how to fix them.

The shot above was taken from the three meter tower in the diving well.  Canon 5D2

We shot a lot of stuff over the course of the morning and the editor ran 22 photos over six and a half pages.  And he used one of the images on the cover.

Well.  I got nice photo credits.  I got great exposure (pun intended).  I got access to a cool Olympian in the sport I adore.  So did I do this all for free because it made me feel warm and fuzzy?  Hell no.  The second thing the editor and I talked about, after the basic nuts and bolts, was rates and usage.  Nothing moved forward until there was a signed CONTRACT.   The cover will look good in my portfolio but just as importantly the check will look good in my bank account.

This is how photography should work.  It's how it can and does work.  Just because something is fun and fulfilling doesn't negate the fact that it brings value to the person who needs to use the images.  It's called a win-win-win.  If the images were worthless no one would want to use them.....

Confused about pricing?  Get a book.  Try John Harrington's

.  But the fundamental way to look at it is that if someone wants to use your image it has value.  You don't have to trade anything for access if you have a talent someone needs.  You can have access and the appropriate fee for usage.  If you give it away you screw yourself and diminish the market for everyone else.  Try to be like a Boy Scout.  Always leave your campground cleaner than you found it.
Posted by Kirk, Photographer/Writer at 18:31 10 comments: