I like images that use natural light and added light. They seem harmonious. 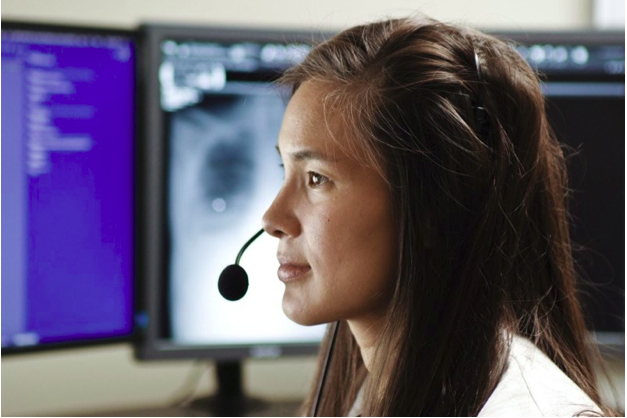 This image of a radiologist was lit with the light of the screen in front of her and also by a small flash in the back of the room that bounced off the ceiling and boosted the overall illumination and added an accent light that separated her hair from the dark screen of the monitor behind her.  I used a Fuji S5 camera to make the photograph and I still marvel at the sharpness and dynamic range when I look at the full sized image.

I shot at f2.8 and, of course, the camera was on a tripod for the exposure.  The tripod often being the most important tool in creating good shots.

Lately I've become very interested in using small LED panels to take the place of flashes.  Part of the reason is the general compulsion to keep learning and to keep commercial photography interesting for me.  But another part of the equation is the belief that these light sources will be become the ubiquitous light sources of the future.  At some point flash might become the specialty tool and LED's the day-to-day lighting instrument of choice.  Maybe not, but there's no real cost for experimenting.

I did a portrait today and I lit it the same way I would have with flash or with tungsten but this morning I decided to use LED panels as my primary light source.  I set up a nine foot wide gray canvas background and lit it with two conjoined, small, battery powered LED panels.  Like these:  Little LED

. They made a nice soft glow that surrounded my subject.

with diffusion that you've probably seen me use for Zach Scott portraits and other favorite work.  Over to my left and positioned at about a 45 degree angle to my subject.   It's no secret that I love huge, soft light sources. It's a beautiful way to light faces. Behind the large diffusion panel I used two of the ePhoto 500 LED

panels.  The photo shoot was very successful but I learned some of the limitations that come with using inexpensive (read: not very color accurate) LED panels.  And I learned that the shortcomings are in no way insurmountable.

Seems that no matter what the distributors say there is a nice big spike in the green spectrum of the lights.  If you do a custom white balance you'll be pretty much okay but you might find some anomalies in the color balance that lead to a few splotches.  I shot my Canon DSLR in RAW so I was able to lower the saturation and increase the luminance of the green channels (and, to a certain extent, the blue channels) in order to compensate.  But here's what I learned through subsequent trial and error:  adding a 1/4 strength minus green gel filter does a reasonably good job compensating for the aberrant color spike.  The name of the game is get the light as close to daylight as possible.

If you don't have a color meter handy you can always set your camera white balance to daylight, shoot a white target, use the color eyedropper to correct to white and note the numbers you get in the Lightroom develop panel.  You're looking for two separate but related parameters.  You want to see how close to 5500 degrees kelvin the color temperature is and you'll want to note how many points of green or magenta have been dialed in to get a neutral white target.  You'll likely see a swing over to the magenta side of the scale which means you'll need to add some magenta to compensate.  If Lightroom indicates that it requires 30  points of magenta to render neutral white you'll probably have a filtration starting point of between 1/4 and 1/2 minus green filter.  That's actually a magenta filter that takes out green.

When you filter you're going to loose some power and that's important with LED panels.  They don't put out a tremendous amount of light and the light they do put out isn't collimated into efficient columns of focused light like you might find in a well designed tungsten fixture.  You may need to move the panels closer in to the diffusion material.  Don't worry.  Nothing will catch on fire.

So, why go through this exercise if you already have tons of great flash equipment that works well?  For one thing, the quality of continuous light is different than flash.  There's also.....no flash.  And that means fewer anticipatory flinches and blinks.  You get into a motordrive rhythm that's heavenly.  And with modern DSLR's you never need to stop.  There's ample light for focusing and the ambient light (after you've figured out the filter factor) makes nice fill light.  It's also new and different.  And for me that's enough.
Posted by Kirk Tuck, Photographer/Writer at 20:59 8 comments:

Nostalgia for the days of giant cellphones and invisible photographers 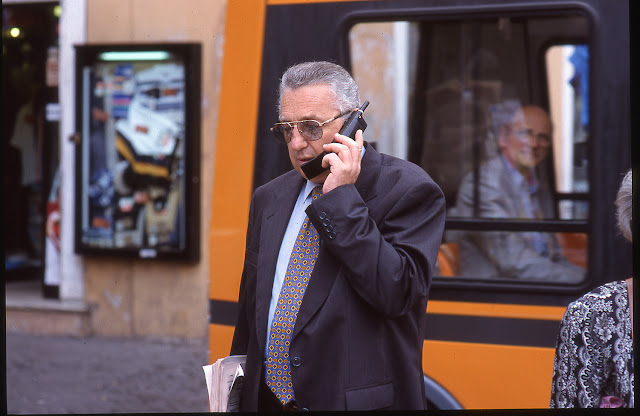 I love huge cellphones because you could always see them.  When you could see the big instrument in someone's hand you had an 80 or 90% certainty that they were talking to someone other than themselves.  Now, with the tiny phones,  you can't really tell whether the person weaving down the street, running into strangers, or the person in a car running right through red lights is just insane, inebriated or, in fact, has some tiny device they are cupping next to their heads and is talking passionately about nothing at all....

In the days of the big phone the call was theater.  Now the call is in the service of ever shifting plans or to assuage general feelings of disconnection.  I conjecture that entire groups of people now have have un-purpose driven lives and use the ubiquitous cellphone to get the next set of directions from some extra-planetary overlords who control the general population via microwaves.  It could be that the person next to you taking snapshots with their iPhone or their Verizon Punk phone is really just triangulating your position so that the overlords can assimilate you as well.  I also get the feeling that cellphones are largely responsible for adult onset Attention Deficit Disorder.  Never have I seen a person change gears and go from a full out, impassioned conversation to a passive and submissive listening mode as quickly as in the past few years.  A Pavlovian respond to a tiny few square inches of plastic and Lithium Ion.

Perhaps this too shall pass and people will go back to diligently practicing their lives with purpose, picking up their phones once or twice a day in order to check messages and return calls.  Maybe that's the hope of economists optimistically calling for enhanced productivity to pull us out of the economic mess.  Naw, the nature of the universe is to constantly move from order to chaos.  From momentum to entropy.  Why should humans buck the trend?
Posted by Kirk Tuck, Photographer/Writer at 13:24 7 comments: