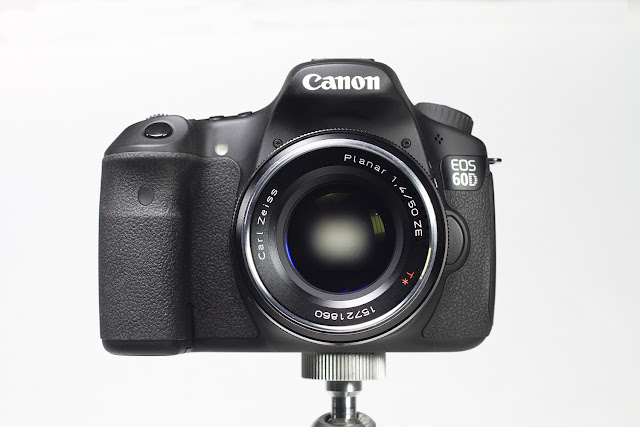 the minute I picked it up and (with a few caveats) I've liked it more and more as I've used it.  But it wasn't until I capriciously stuck the Carl Zeiss 50mm 1.4 ZE lens on the front of it that it became my favorite camera to take out shooting.  It's more responsive and feels about one and half generations better than a Canon 5Dmk2.  It's at least as good a camera for most non-ultra-sport shooting as the Canon 7D.  And I like the way it feels in my hands.

I originally bought the 50 Zeiss to use on the 5D2.  I thought it would create very cool looking images with impressive DOF effects and it did that just fine.  But what it didn't do well was manually focus.  And when I used the focus indicator or the focus indicator+obnoxious beep I found that the combination missed the point of sharp focus, no matter how I had the camera set.  The 7D was a bit more accurate but even with the micro adjust feature of both the more expensive cameras I was never quite sure I'd get what I wanted in sharp focus.  Which led me to believe that the mis-focus anomaly must either be non-linear or intermittent.

On a whim I put the lens onto the 60D and set the menu items for "stupid operator in need of much help" or SOINOMH mode.  That means, center focus point, beeping confirmation and steady green light indicator hand holding.  I proceeded to shoot and the oddest thing happened:  Every time the camera told me I was in focus I really was in focus.  I was soon able to lose one set of training wheels.  The beep.

Although I leave the beep on if I'm around a bunch of really pretentious gear nerds because it seems to drive them crazy and, as they flinch and clutch at their 1DS mk3's, I have a moment of selfish entertainment......)

A benefit of this newly realized focusing capability is the new knowledge that the Zeiss lens is sharper wide open than I originally thought and the saturation and color rendering is pretty darn good.  This leads me to leave that lens on that body all of the time.  This combo gives me a solid platform, great images, smaller form factor and the satisfaction of having a tool combination that's working at optimum efficiency.  If you don't shoot sports and you don't need the full frame chops of the 5Dv2 this is really a wonderful little camera with good high ISO performance into the bargain.  I grab it first when I leave the house or studio.  When I'm being reckless this is the combo I keep in the car.

But I'm not writing this with the intention of slagging the 5 or the 7.  It's just that this whole circus of lens  madness and focus brought me to realize that there may be an optimum lens and camera combination for each body.  I spent a while looking through images I've taken and I think it really breaks down like this:

1.  The 60D and the Carl Zeiss 50mm is my favorite combination for casual portraits and walking around  just making photographic trouble.  I like shooting with the rig between f2.2 and f3.5.  I like what it does to the backgrounds when I get in close.  Works for me.

2.  The 7D is the perfect match for the 15-85 and that combination is rarely rent asunder.  For some reason I feel like they ultimately compliment each other.  I love the wide angle end and I find more and more that it's a lens that was made for wide open shooting.  The 7D sensor and AF seem to wring out every scintilla of performance from the optics and vice versa.  If it's commercial and I've got to get the shot this is the camera I'll grab.  Doubly so if it involves "smart flash" or HS flash.  Really.  Almost as good as the Nikons........sniff......(meaning as good with flash as the Nikons are.  Not anything else.)

3.  The crazy anomaly.  The 5D2 has the best overall image quality of the three and not just by a whisper.  But it seems harder to extract that extra five to ten percent of quality for me.  Sometimes, when all the stars line up I get incredible stuff.  And for high ISO I am consistently impressed and amazed.  But it can be a goofy camera to work with.  The body doesn't really feel as solid as the other two.   And instead of one there are two lenses that I think are synergistic with it.  One is the 85mm 1.8 which seems to ride on the body about 60% of the time.  The other is the 70-200 f4 which comes out of the case when we do traditional portraits, lit with softboxes and perfectly metered.  Every frame is sharp from f4 on down and it has no weird CA's or soft spots.  I thought I'd love the Canon 5D2 with the 50mm focal length but that's been a non-starter for me.  I love using it on a tripod and with the mirror locked up.  That's "sharp mode" and it really reaches down and pulls out great performances when used that way.

If I had to choose one of the three to go and shoot personal work with?  It'd be the 60D.  More to come.

I was thinking about this whole subject as I was "nerding" around in the studio getting used to my new LED light fixation.  I decided to do a photograph with which to illustrate this blog and I wanted to see how the new lights would do on a product shot.  I wanted to see what, if any, the advantages of using LED's over florescent or hot lights would be.

Right off the bat I found that I could use the lights closer than I every have before.  That means even a small panel with some diffusion on it yields the same soft light as other fixtures in bigger fixtures used further away.  I could also use fixtures right next to my camera without worrying about being blinded by the flash or heating up the camera.  In the same situation the florescents would probably have held their own.  But compared to tungsten and flash the whole setup, visualization process and shooting was easier, more comfortable and more straightforward.

I even included a set up shot.....just for fun. 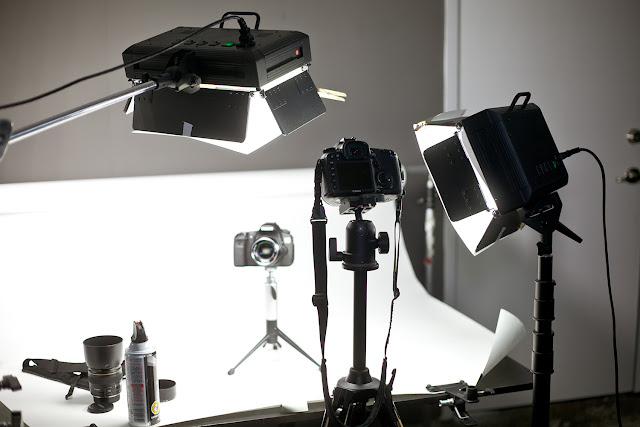 not shown is one more light to the far left of the scene which is providing additional illumination on the background to keep it even.


The lights are the ePhotoinc LED 500

's I've mentioned before.  I took a chance and it turned out well.  So far I've done a handful of assignments and my only real issue is that getting perfect white balance has to be more intentional at the front end of the process now.  Also, the lights can cause polyester fabrics to go a bit purple.  I'll experiment with some UV filtration when I get back by gear.   For everything else?  Charming.  And cool.
Posted by Kirk, Photographer/Writer at 19:24 21 comments: 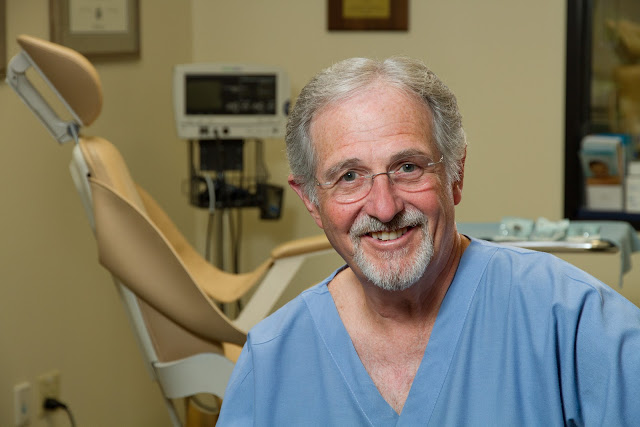 Dr. White on location at his office in Austin.


I've been doing a series of ads for a large oral surgery practice here in Austin.  We are introducing the partners/doctors to the community in a casual ads that showcase the doctors engaged in their hobbies.  We photographed a rancher/doctor feeding a baby dear with a bottle in a pasture.  We photographed one person with his Ducati Monster motorcycle out on the golf course and we photographed one subject with his horse.  All the shots were fun and showed a side of the guys that people rarely see.  It served to make them more than two dimensional.

But then I came along a doctor who had sacrificed his free time to be the president of his professional association.  He was adamant that for the past two years any time he didn't spend practicing medicine he spent working for its improvement.  He felt most at home right in his office.  So that's where we did his photograph.

I am standing out in the hallway and Dr. White is sitting just inside the door.  I'm using a Canon 580 EX2

flash in a Speedlight Prokit beauty dish about two feet above camera, tilted down at him, for my main light.  Behind him and over to the left of the frame I'm using a second flash, a Vivitar 383 df

, bouncing off the ceiling in the middle of the room.  I used a third flash, also a Vivitar 383 df

from the back right of the room, with a home made grid attachment to provide just a little bit of accent light to the left side of his face to give a bit of separation with the back wall.

All of the lights were used in manual mode with the main light at 1/4 power, the room fill at 1/2 power and the accent at 1/8th power.  I used a Canon 7D body

tripod.  I was looking for a realistic but flattering lighting design that didn't call too much attention to itself.

The shot was done in raw and processed in Lightroom 3.

From a technical point of view there is a big shift in how I pack to light things.  In the past I would have taken monolights or a strobe pack and heads but now it just feels natural to take small lights for indoor shots.  Nine times out of ten the big lights would require me to really throttle down their power in order to match them up with room light levels.  Then there's the hassle of running extension cords all over and the need to bring bigger stands and accessories.  When I go to shoot interiors now I'm generally feeling well equipped if I take one Canon flash, like the 580 EX 2, and three cheap manually controllable flashes for fill and accents.  All of this and the Speedlight Prokit beauty dish and a few other modifiers fit comfortable into a Think Tank wheeled case along with the camera and a few lenses.

I triggered the main light with a long Canon off camera TTL cord (the flash was used on "manual") and then let the two Vivitar 383's provide their own slave function with their built in optical slaves.

Obversely, when I go out to shoot on locations that are exterior I find that I generally leave the small flashes at home and use the more powerful Elinchrom Ranger RX

pack system (600 watt seconds).  These lights provide me the punch I generally need to blow light through a softbox and still match sunlight.  I take the Profoto if I want to move fast and the the Elinchrom when I need a lot of pops.  (I also have an extra battery for the Elinchrom....).

Outside I use a radio trigger (Flash Waves 2

) or an old fashion PC cable to trigger the flash.

I used the 7D on this assignment because I like the versatility of the 15-85mm lens and I like the fact that it's really very sharp wide open.  Couple that with better autofocus than the 5D2 and you've got a camera and lens package that's easy to shoot.  I was originally seduced by the full frame of the 5D camera but in practice I've come to appreciate the advantages of the cropped frame cameras and often choose the APS-C system of the 7D, backed up with a 60D for a lot of my work.

Doesn't matter what you're shooting with as long as you're having fun and making money.

,  is back in stock at Amazon after being sold out for several weeks.  Sigh of relief.
Posted by Kirk, Photographer/Writer at 16:42 6 comments: