The latest victim of my iLED-ology fascination. 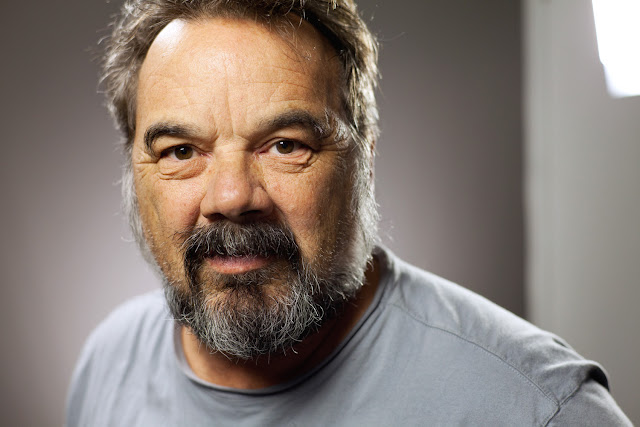 Intrepid Photographic Genius, Will van Overbeek, Poses For Another One Of
My Endless LED  Lighting Experiments.  Straining The Bonds Of Friendship.......
I've come to believe, after years of trial and error,  that the only way to master a style, a light, a camera or a lens is to spar with it for weeks, wrestle it to the ground and beat on it for months and months.  Maybe even years and years.  The only problem with that for a photographer who likes to photograph people is that, sooner or later, your friends, loved ones and neighborly acquaintances will start to avoid you like sour milk and you'll have no more subjects on which to practice.

Will is a brilliant photographer and an old friend and we often meet for lunch.  But today he got too close to the gravitational draw of the studio and, like a spider,  I slowly pulled him into the web.

If you've been reading this blog for a while you probably know that I've become quite interested in LED lighting.  Interested enough to take money out of my pocket and buy three 500 bulb LED

fixtures and one 1000 bulb fixture

.   The light they put out is different from flash and daylight and I keep trying to get a hand on it.  To this end I'm practicing with all manner of filters and custom white balances and fixes in RAW.  Today I was going for a contrastier look.  I used the 1000 close in as a main light, with one layer of diffusion.  A 500 on the background (a gray painted wall).  I used a 500 as a hair light high and on the same side of the frame as the main light.  On the opposite side I  used a kicker light with only half of its 500 bulbs on.

The rest of the technical details are way, way out of my comfort level.  For example, I'm actually hand holding my Canon 5D2 to do the shot.  A tangle of tripods just steps away.......but I was trying to shake up the way I shoot.  My ISO was set to 100 and, amazingly, instead of a longer portrait focal length like a 100mm or even a comfortable old 85mm, I was using the 50mm Zeiss lens.  I shot until Will couldn't stand it anymore.  We called it a day after ten or so frames.

I'm starting to get my LED's dialed in and in about six months or so I should have an eminently useful methodology in place.  For now I'm just enjoying the novelty of it all.

Why am I shooting with LEDs?  Um.  For some crazy reason, corroborated by my electrical engineer friend, Bernard,  I think they will end up being the universal light as we go forward.  The lines are already blurring a bit between stills and motion and I'm betting Ben's generation (kids under 20) will have no real interest in still images when they come into the market.  I'd like to learn this stuff at the front end instead of being like all the guys I met back in 1999-2005 who were waiting to see if digital was going to "catch on".  I watched them trying to cram down the ten years of learning curve and experimentation I did with digital into ten months.  And for them it was a real "sink or swim" situation.  The market had moved around them and they didn't know how to paddle the boat any more.

And constant learning keeps the process fun.  And isn't good, clean fun what it's really all about anyway?

Posted by Kirk, Photographer/Writer at 18:14 10 comments: 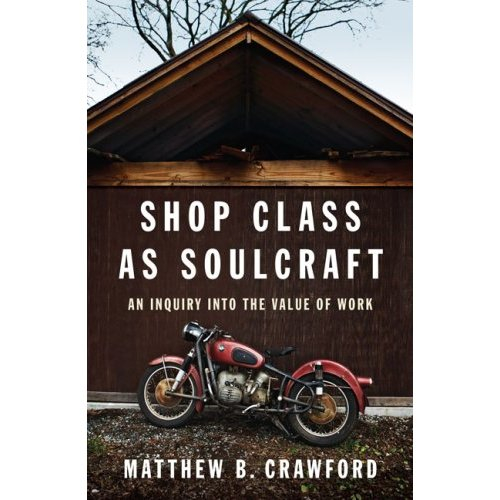 This is one of the best books I've read this year.It's a really great look at why people aren't necessarily happy doing what they've been told they should be doing.  And it's about under-standing choices.

This is a very well written book and it looks at work in a different way.  The writer has his Phd. in something impressive and worked in a think tank and in an information technology company before chucking it all and returning the the thing he enjoys the most,  fixing motorcycles.  He makes a compelling case that work which entails problem solving, the use of one's hands and garnered intuition makes for a happier work existence.  According to Crawford 93% of high school students are now placed in college track preparation.  The college courses that most people take prepare them for......nothing other than an improved quality of conversation around the water cooler.  He posits that education inflation really means that most of the information technology jobs that drive the economy could have been admirably filled by high school graduates from several generations before. (Before my highly educated readership gets their backs up he specifically exempts engineers and doctors from his discussion on the premise that they really do learn valuable and commensurate skills that intertwine their pure knowledge base...).
As photographers we tend to occupy the "no man's land" of vocations.  All that's really required to do the mechanical parts of our jobs certainly doesn't require a college education.  We'd all do better at becoming product or people photographers by watching talented mentors and by assisting.  That, and a liberal dose of really reading the owner's manuals for the products we buy......
By going to college photographers can learn important things about art and art history, writing, literature and philosophy which, when properly digested, may add significant value to the character and quality of the way we see and interpret our work.  But in many cases it would matter not at all.  And that's the tragedy of making college into a trade school.  Having knowledge doesn't always add value to routine but skilled work.  And many times we're aimed in the wrong direction.
I won't go into detail here and I may be skewing his arguments to fit my mythology but I will say that the book makes me feel a connection to the "blue collar" aspect of my work,  the hands on skill sets and polished craft, in a very different way.  It opened a door in my thinking that helped me see the value of tactile  and intuitive craftsmanship as a vital piece in itself,  not solely as an adjunct to a trendy, philosophically driven and stylistically homogenized image making.
I especially recommend this book to anyone who's kids are starting to think about what they want to do with their lives and how they want to proceed with their education after high school.
I'll go so far as to say this is "must read" stuff for photographers struggling with a new market paradigm of imaging, marketing and surviving.  Five stars.
Posted by Kirk, Photographer/Writer at 11:22 2 comments: