Shooting Theater Ads with LEDs. Yes you can light a set. 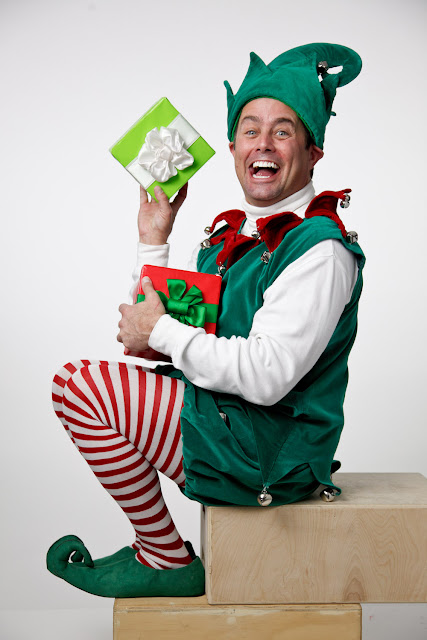 .
Santaland Diaries, is my favorite Christmas play ever.  And when Martin Burke plays the elf in this one man production it's possible that it rises to becoming my favorite live theater performance, extant.  So, every year the marketing folks at Zach Scott come calling and we do a shoot for direct mail, website use and various other bits of advertising.  I'd like to think my work is so great that it's the reason they sell out every performance, but as I've already said,  it's a great play.........So much for my fragile ego.
They called again this year and I threw a wrinkle into the plans.  As you probably know I've become fascinated with LED lights of all varieties and I told them I'd love to help out with the photography as long as they'd be okay with me using all LED lights for the shooting production.  "Sure.  We guess." 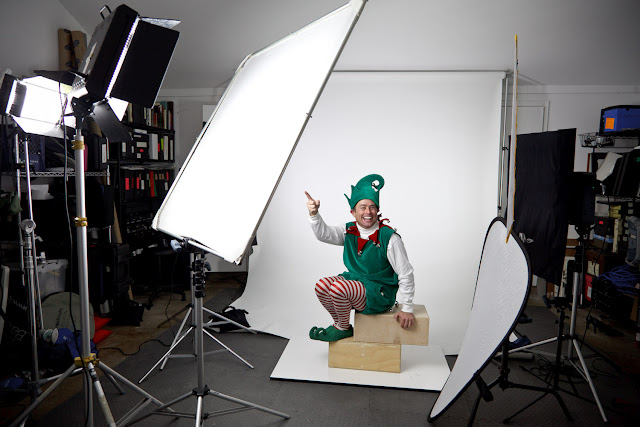 I went into the studio the night before to clean and set up.  I've got a nine foot wide seamless on the back wall and it's being lit by one 500 LED

panel placed on either side, just behind Martin.  The lights have a lot of spill so I'm using two of the Westcott FastFlags

, covered with black fabric to block any spill forward onto Martin.  The lights have four switches on the back and you can turn on and off banks of LEDs to adjust the intensity.  After a quick metering I turned off one of the four banks on each back light.

panel aimed through a one stop diffusion cloth on a Chimera four foot by four foot frame.  I added another 500 bulb light just to the left of the big light.  It's mostly hitting the diffusion but I'm also letting some of the light hit Martin directly just to add some contrast and intensity to the shot.

On the opposite side I'm using a small Westcott FastFlag with a white fabric of fill (you can just see the sliver of the side profile above the flex fill that's sitting on the floor and leaning against the light stand.
That's the extent of the lighting.  So, how did it all work out? 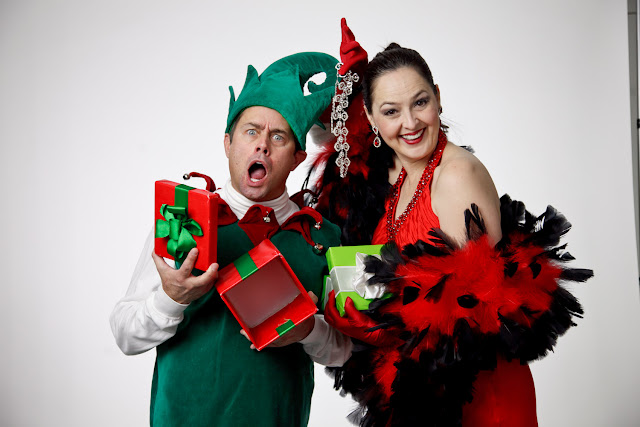 I was very happy to shoot with the continuous light.  I could see very clearly and quickly the effects of any changes in the lights.  If I moved something I could see it immediately.  But it did take a few minutes to re-orient the actors to a new way of shooting.  We've shot together many times and on most of those occasions we've used flash so they were used to being able to make fast moves and big gestures without worrying about blur.  For most of the time on this shoot we worked at f4, shutter speed = 1/80, ISO= 800.  If action was important I'd bump up the ISO a bit more.  (Camera:  Canon 5dmk2 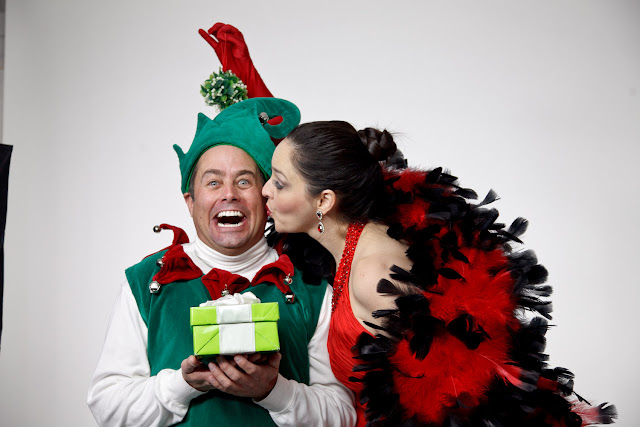 I noticed two big differences.  The actors didn't get tired as quickly.  They are used to working under continuous lights and both mentioned that it was much preferable for them to the disconcerting nature of random and powerful studio flashes.  The light levels in the room were much higher than what I usually get from the modeling lights and that helped make the actors pupils close down, which makes images much more natural.  The second thing I noticed was that no one had to wait for flash recycling.  If I saw a fleeting expression I could catch it in a quick burst of 3 fps without any worry about erratic exposure. 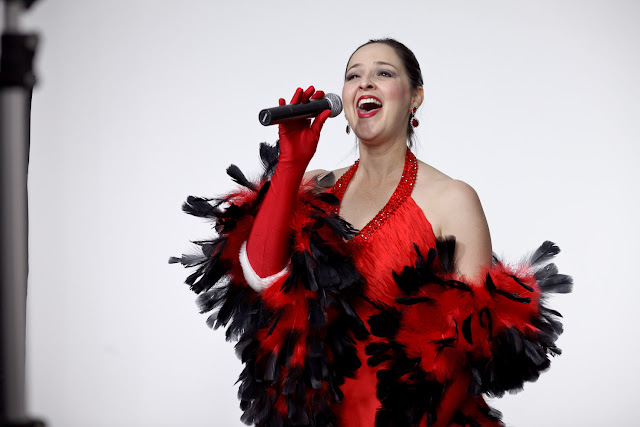 In earlier blogs I reported that I had been filtering the lights with "minus green" filtration to deal with the mild, but obvious green spike in the color spectrum of the LED panels I'm using.  I've found that if I do a custom white balance at the beginning of the shoot and keep the light on the set the same I get perfect color with good saturation and consistency across the board.  And that's without any filters at all. 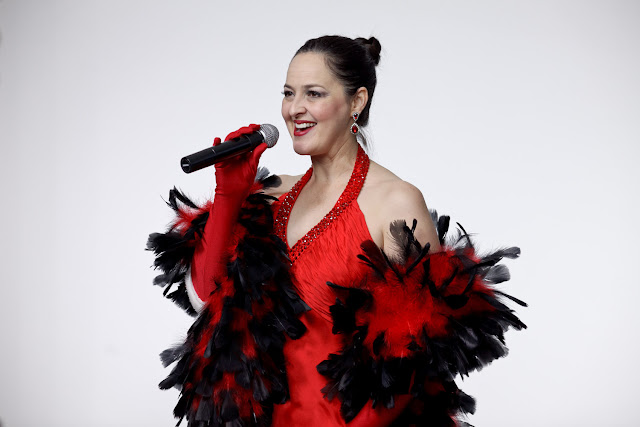 While the LED panels throw around a lot of light and spread it pretty well they are still pretty hard sources when used without diffusion.  On this shoot most of the light that touched to the actors was diffused through fabric diffusion cloth.  I've also recently paid a visit to the movie rental facility here in Austin called, GEAR, and laid in a good inventory of diffusion materials that go from 1/4 stop to 2 stops and include Rosco Luxe (a beautiful diffusion material!!!!!) and even various thicknesses of ripstop nylon.  And guess what?  Every permutation gives a subtle yet very different look to the light.  It's the combination of direct and diffused light through the same surface.  And I can tell that, with a little bit of practice, I'll be lighting better than I ever have and with more control because I can see the changes as I shoot.  I guess this is why some movies look so darned good.  The DP's utilize much more control that we typically do as photographers.  We tend to think in binary terms about soft and hard but there are so many intermediate shades of gray (or collimated and diffused light rays....) 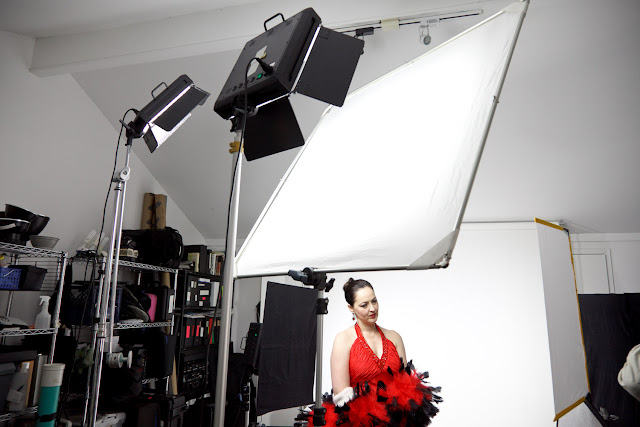 The images here are all directly out of camera, converted from RAW files to Jpegs.  The marketing people will make their selections and we'll clean up the backgrounds and retouch the skin a bit.  Am I happy with this project and the inclusion of LED lights.  Absolutely.  Will I do it again?  Tomorrow.  Literally.  Jana and I are shooting all day long.  But the twist is we'll be using both these big panels in the studio and a bunch of smaller, battery powered units on exterior locations.  I'll have examples up as soon as I can.

Final word was from the marketing crew:  "Wow.  No heat."

Zachary Scott Theater is building a new theatre next year and the plans call for them to be the second theater in the country to switch over to all LED stage lighting.  Do I feel a groundswell occuring?  Or is it just the inevitable slide and glide away from the light bulbs of the last century?
Posted by Kirk Tuck, Photographer/Writer at 18:24 11 comments:

Sometimes getting a photo stolen is flattering. A little. 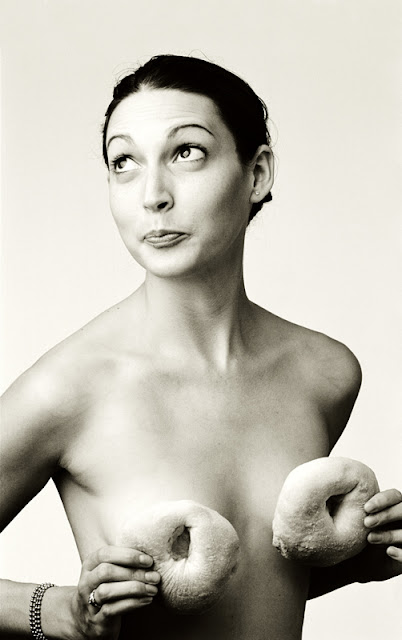 For about twenty years I had a great deal with my favorite bakery in town.  I would put up photographs on their walls of people which also featured their products and they would give me free coffee and pastries every day.  One day my assistant, Renae, and I were working in the studio and we started talking about the ongoing show.  We decided to shoot some baked bagels, which are apparently called "bialys" and quick as can be Renae popped off her shirt, grabbed the baked goods and struck a pose.

The original of this was shot on color slide film with big soft lights.  I converted it to a quadratone in PhotoShop and we printed it as a 20 by 30 inch print.  In due time the print was mounted, matted and framed and we delivered it to Sweetish Hill Bakery.  The owner put it up over the condiments.  Every time someone walked over to put cream in their coffee or sugar in their tea the print would catch their attention.

In the ten years that it hung on the wall one person complained that it was inappropriate.  The owner told her that, if she was really upset by the artwork, she might be more comfortable buying her bread and pastries somewhere else.

But then something strange happened.  The print started getting stolen.  It happened twice and cynic that I am I immediately suspected the intolerant woman and her cronies.  And in artistic defiance we quickly reprinted the image and had it back up on the wall in short order.  A few months later it was stolen again.  And again we put up a new copy.

Eventually the show ran it's decade long course and I showed up one morning to take all the work down.  The regulars leapt from their tables, cast aside their New York Times and hung up their iPhones.

"What the hell do you think you're doing?" They demanded.  I told them I was taking down my art.  "Don't touch the Bialy Girl photo and we won't hurt you."  They responded.  I left it there for a few more weeks.  I came back after hours, eventually, and removed the photograph.

One day a few weeks later I got a phone call from a woman who demanded to know if I was the owner of the image of the "bagel girl" photo that had hung in the bakery.  Upon learning that I was she asked how much I would charge for the print and the framing of the "Bialy Girl" image.  I told her a ridiculous price and she accepted without hesitation.  She then asked when should she come by and pick up the artwork.

I was curious though.  Why did she want it?  She explained that she had a teenaged grandson who had tacky posters of J. Lo.  up in his room.  She was determined to give him something she thought was more tasteful.

She showed up on the appointed day in a beautiful, black, Bentley automobile.  She took a cursory look at the print in the frame and then proceeded to peel off a number of bills from a wad of $100's.  I helped her put the print in the trunk and she was gone.

So, what does this have to do with the stolen photographs?  Well, about a year later I was having coffee and an empanada at the bakery when I was approached by two "thirty-something"  women.  They asked me if I was the photographer who used to show mostly naked people and pastry photos at the bakery.  In a very embarrassed way they asked me what  kind of price I would have given to two struggling college women who loved the print, if they had asked.  As it was academic at this point I said that if they wanted it because they liked the art I probably would have sold a print like that for $250 back then.

They looked at each other and nodded.  Then one of the women reached into her pocket and pulled out that much cash.  She sheepishly handed me the money.

She could tell I was curious by the look on my face.  The both smiled sweetly and said, "Don't ask."

I never found out what happened to the other stolen print but I like to think someone liked it and couldn't afford what they assumed the print might cost.  I keep going back to the bakery.  At heart I'm an optimist.  I keep thinking someone will walk up, shrug in a confessional sort of way and hand me more money.

Food and cute girls.  Who can resist?
Posted by Kirk Tuck, Photographer/Writer at 17:47 15 comments: