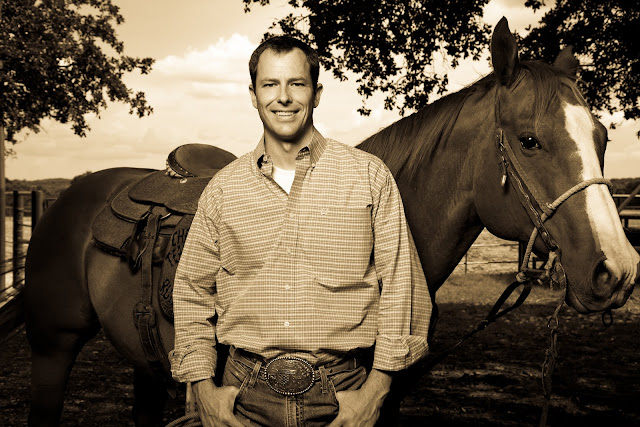 This is Dr. Russell Cunningham.  He's a rancher, a Texan, and a competition horse rider.  Oh yes, and he is also an accomplished oral surgeon.  I would probably have never met him if not for an ongoing project I've been doing for the practice in which he is a partner.

To make this image my trusty assistant, Ben, and I threw some gear in the trusty Honda Element and drove out past the town of Dripping Springs to the ranch.  Ben dragged the cases and sandbags out of the truck while Dr. Cunningham and I discussed the set up.  We shot in the open shade and went back in and filled with the Profoto 600b battery powered electronic flash firing into a Photek 60 inch Softlighter 2.  It's basically a 60 inch umbrella with a black backing.  It also comes with a diffusion cover to soften the light that bounces off the reflective surface of the umbrella.  I used the umbrella in fairly close and set the control box at half power.  I set a basic exposure for the sky and sunlit background and the used a light meter to set the flash level on Dr. Cunningham and his horse.  We brought two thirty pound sandbags along because we knew if the wind kicked up we'd need them.  We needed them!

Ben hung onto the stand and the umbrella while I fired away with a Canon 5Dmk2 and the 24-105mm L lens.  This lens has some cool features.  It's got a great range for most editorial situations.  It's got a really good image stabilization system.  It feels solid.  But the thing that keeps me reaching for it is that it's so darned sharp.  Even at f4 the detail I get in the center of the frame is really wonderful.  If I didn't suffer so badly from GADD (Gear Attention Deficit Disorder)  I could easily run my whole business with this lens and the 70-200 f4L lens.  They're a nice match.

The ad ran in color but I like the feel of the black and white treatment so that's how I processed it for my portfolio.

Every month has been different.  This one really feels like Central Texas in the old days.
Posted by Kirk, Photographer/Writer at 16:16 8 comments: