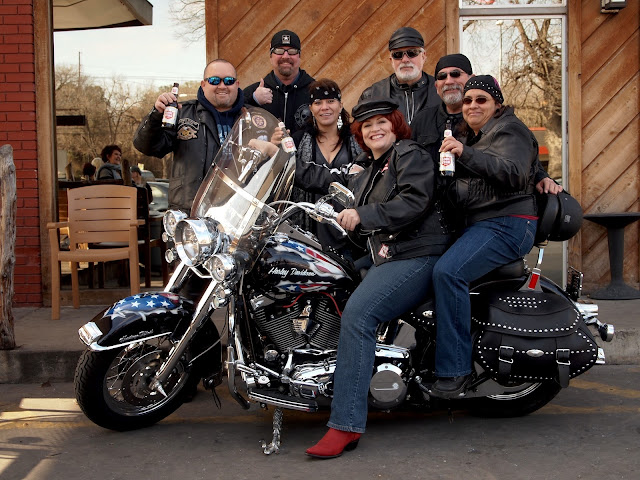 Barbara and friends down at Buffalo Bills in a promo shot for an upcoming production at Zach.


Leaving behind the "red dot" imbroglio for a now,  I took the EPL2 (with the EP2 as a back up) when I went to shoot some production shots for an upcoming play about Molly Ivins, today.  We took a series of shot in front of a red curtain with a large LED fixture as our main light and then we headed down the street to a bar called Buffalo Bills where we met our group of volunteers.  They all brought their own Harleys but the director, David, though this one would be the signature bike.  I was going to light the scene but it was a beautiful day, we were in open shade and the open shade setting on the new camera seemed just right.

I was happy to be able to shoot black leather jackets so I could see what the noise looked like in a every day kind of shot.  This was shot at ISO 200 which, like the EPL1, is the Olympus "recommended" ISO to shoot with.  It's supposed to be the best combination of dynamic range and low noise.

The camera, with the VF2 is actually a very capable production camera.  Set on continuous it bangs out frames quickly and it takes a while for the buffer saturation to slow down your shooting speed.  I tend to shoot in burst of three and four frames so with my method I rarely ever have to wait for the camera.  It's usually waiting for me.  It probably wouldn't be a good sports camera because the view finder tends to black out for too long after each shot in single frame and the buffer does fill up quickly in raw.

We went back over to the theater and shot some other production shots against a white background.  I used the larger LED (two for the background and one for the main light) lights and the camera, on auto white balance, nailed a perfect white in the background and great skin tones.  And I needed that.  Since there's no RAW conversion for this new camera in Lightroom I was shooting jpeg and depending on proper technique to ensure good results.  No "save it in raw" here.

When I looked at the files I was happy.  I'd probably stick to 800 and under for print production photography but then, as a measuring method, understand that I try to keep my Canon 5Dmk2 at 1600 ISO or lower for the same kind of work.  The bigger, sharper screen was a big help when it came to sharing previews with the production team.

There were no red dots but there were red boots.  I swear they were that way in real life.  I didn't change a thing.  This file is straight OOC.  I should mention that I used the two kit lenses for everything.  The bike shots were done with the 14-42.

Fun shoot.  Should be an even funner play.  EPL2 does it's first, full, solo, real life job.

For the nosy foodies,  I went to Artz Rib House with my friend, Mike, today.  We both had the regular order of baby back ribs, double beans, no potato salad, yes cole slaw.  For my money, the best BBQ ribs in the city limits.  Nice.
Posted by Kirk, Photographer/Writer at 17:14 7 comments: