Up early for a swim meet. The light was sweet. 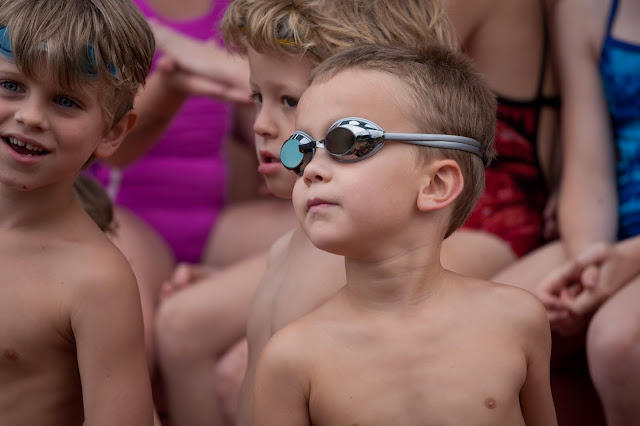 I was up early today for the second swim meet of the Summer League season.  We got to the Lost Creek Country Club around 7:30am so Ben could swim, I could shoot and Belinda could spectate.  I carried my new favorite sports gear, the Canon 1Dmk2's and a 70-200L plus a Tamron 11-18mm wide angle zoom lens.  The pace is slower than assignment work and I had the luxury of shooting raw and playing around. I kept seeing great shots of the kids so that's what I concentrated on. 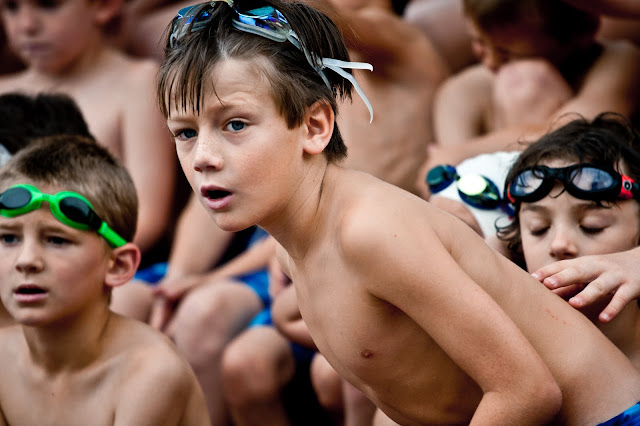 The kids are pretty blase about the swim meets.  The little ones can be apprehensive but by the time they hit their third year on the team they know what's expected and how to do the process.  I like photographing them as they are waiting for their events.  They are cheering on their teammates and getting ready to perform.  In our country club league all of the parents are required to volunteer for four or five meets, depending on the job.  Some are age group parents who round up the kids and get them to the ready bench on time for their events.  Some are timers, some run concessions and some are stroke judges. 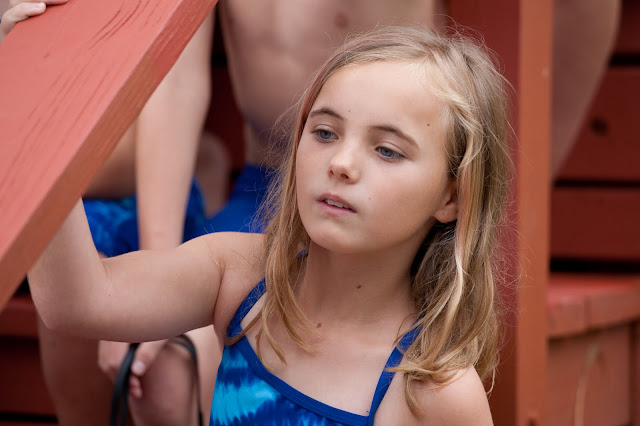 Quite a number of the parents are good photographers.  One guy had a Fuji X-100 at the last meet (a week ago) but today he showed up with a Sony Nex-5 and an adapter Cosina/Voightlander lens.  Others sport Nikon D3s's with the requisite fast zooms.  It's amazing that most families arrive in force.  No drop offs.  Two parents with every family.  And they cheer in a nice way and are respectful of the process and of the opposing team.  The kids who live in Lost Creek and the kids who living in Westlake Hills and Rollingwood go to the same high school and are hardly hated rivals.  They just have parents who belong to different clubs. 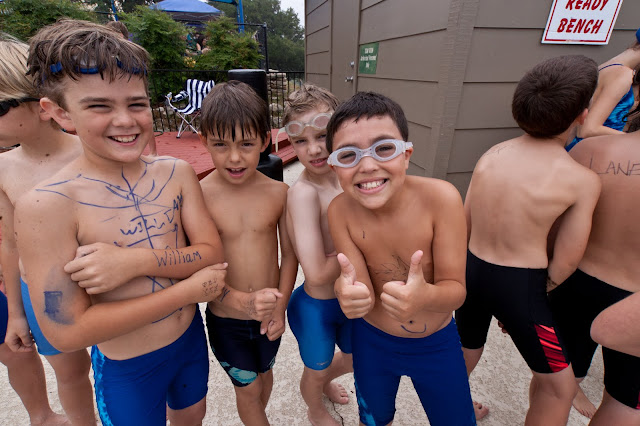 Been alternating between the 200mm focal length on the 70-200mm and the 15mm focal length on the Tamron 11-18mm.  And it's two ends of the spectrum.  Love the perspective distortion on the wide guy.  Love the limited depth of field on the long guy.  Not really doing much this week with anything in between.  I imagine that means I'll be using the 35mm on the 1dmk2 for most of next week...... 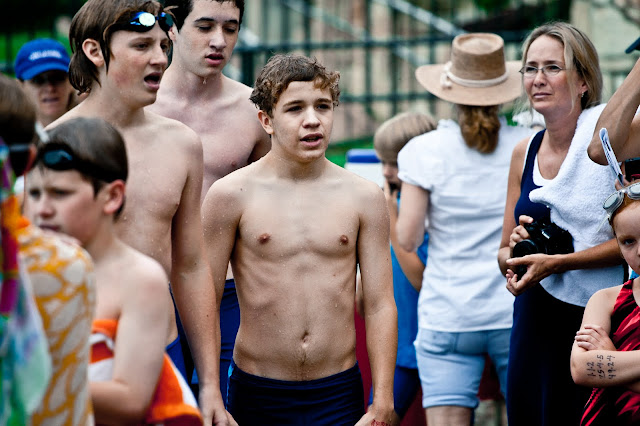 This is Ben with his group of guys behind him and to the left.  He's the shortest one of the bunch and the fastest in everything but the backstroke.  As you can see, hostess Twinkies, Big Macs and a steady stream of soft drinks are not on his diet.  When he's not swimming he's running cross country.  Today he won four firsts and one second.  Good job, Ben. 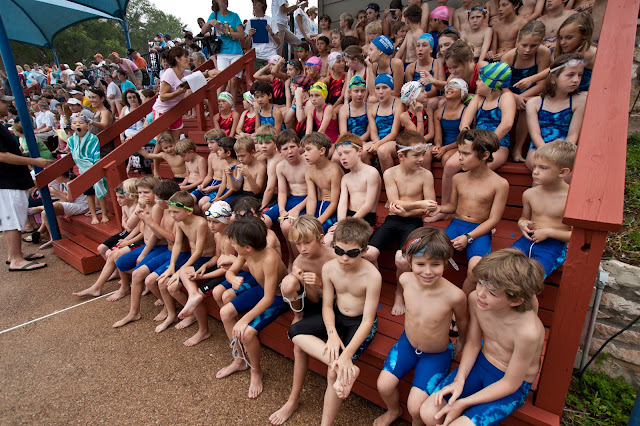 Love the ready bench at the Lost Creek pool.  It's a great way to keep the kids organized and the covering over the top means I usually have soft, indirect light to shoot with.  The 11-18 is working out for me on the 1.3x cropped 1D series cameras.  I just have to make sure not to zoom all the way out to 11mm.  When I do that it starts to vignette.  Not that I mind too much.....  In the core area it's tack sharp. 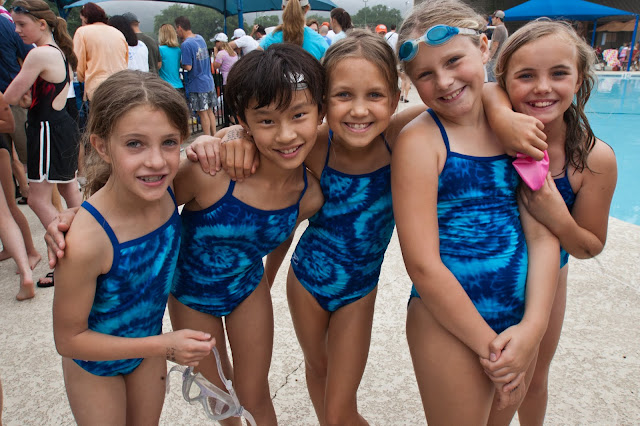 The girls are sweet and don't mind posing.  With the wide angle zoom it's no work at all.  Now the boys on the other hand can be.......kinetic and love to flash hand signs.  They also don't stand as close together as the girls....

I grew up swimming in the Summers on one team or another but we never had photographers there and if we had they never would have burned film on the group shots of little kids.  Maybe they'd shoot a few frames of the overall high point winner or a record setting relay team but never just random shots.  Remember, back then photographers had financial skin in the game.  Today I shot 1200 images.  That's the equivalent of 34 rolls of 36 exposure film.  Figure a cost of about $25 per roll with processing and before you could do anything at all with your slides you'd have already spent about $825.  Factor for inflation from the 1970's and it's probably close to $1500.  The easiest way to share back then would have been to find a space, set up a projector and invite the 140 families for a viewing.  Once.
Now we've just about got all of these edited from this morning and we'll upload them to Smugmug.  At some point I'll upload them into iPhoto and let the face recognition software do it's magic.  Then we can separate them by person and make sure we have representation for each kid on the team for the end of the year slide show.  We'll put that on DVD and sell it to the parents as a fund raiser for the schools.
Parents can go to Smugmug after each meet and see photos of their kids.  They can buy downloads if they want for themselves or prints to send to family and friends.  The whole process is, of course, automated. 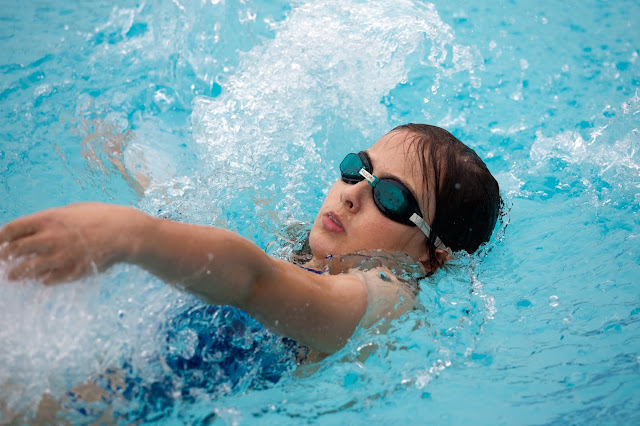 It's a fun way to spend a Saturday morning.  But I don't recommend it if you don't have a kid in the program.  You'll definitely be seen as an outsider.
Nuts and bolts:  There are basic ground rules that I observe.  1.  Going along with my essay on tacit approval, any kid that demures is not shot.  If I shot them and I feel that they don't want to be photographed I hit the erase button.  2.  I carry two cameras.  I leave all the silly crap like extra batteries, silly, puffy camera bags, tripods, flashes, light stands, vests and gimmicks in the car.  I use the kind of straps that God intended; never militaristic bandolier straps that hook into my camera's tripod sockets.  The big black straps convey the wrong image.  Over  the shoulder straps without logos are much less intimidating.....  3.  I yield to race officials and starters.  I never walk in front of an official or stake out territory that puts me in the path of a stroke judge.  I constantly look over my shoulder to make sure I'm not blocking swimmers, judges or coaches.  The swim race comes first, the kids come first, the photography is a distant third place.  We're doing these swim meets for the kids, not my portfolios.
4.  I never sell services or prints while I'm doing my volunteer job.  It's wrong to sell to a captive audience.  If you do good work people will come and find you on their own time.  5.  I never diss another shooter's gear.  Since I often show up with "charming" older cameras like Sony R1's or Olympus EPL's with Zeiss lenses bolted onto the front I wouldn't want anyone to be judging me.  6.  I never let my picture taking get in the way of watching every one of Ben's races.  Sometimes I'll hand the camera to someone else, ask them to shoot that race, so I can concentrate on the actual experience.
7.  I try to only shoot respectful shots.  If some ogre of a parent is verbally abusing their child for "not kicking harder"  I walk on by.  If kids are crying or upset I walk on by.  The rule in this kind of photography, at least where I'm concerned, is to only capture images that people would be happy to see later on.  That includes the kids as well as the parents.  Might be funny to see a kid mess up and swim the wrong direction but it's not funny to the kid....  8.  The days of the photographer being a "big deal" on the deck are over.  Now we share the deck with parent photographers and other kids.  My attitude now is that I'm just another dad shooting photos.  I just happen to be covering each meet for all the moms and dads who are too busy volunteering to do photographs of their own kids as well........
Here's an important point:  The kids splash when they dive in.  Your cameras will get wet.  You can be a baby about it and make everyone around you wish you'd go home or you can just get used to it and embrace the idea that you're standing next to several hundred thousand gallons of water and chances are you'll have the opportunity to meet some of that water personally.  If you don't like the risk or your cameras are too "precious" leave them at home and enjoy the competition.
Finally,  I'm there for the fun.  When I get tired or I've shot enough I sit down in the bleachers and cheer like everyone else.  If you are driven to prove something you shouldn't show up.  If you are there for fun then welcome to chlorine heaven.  There's always room for one more respectful photographer on the deck.
Posted by Kirk, Photographer/Writer at 19:15 12 comments: