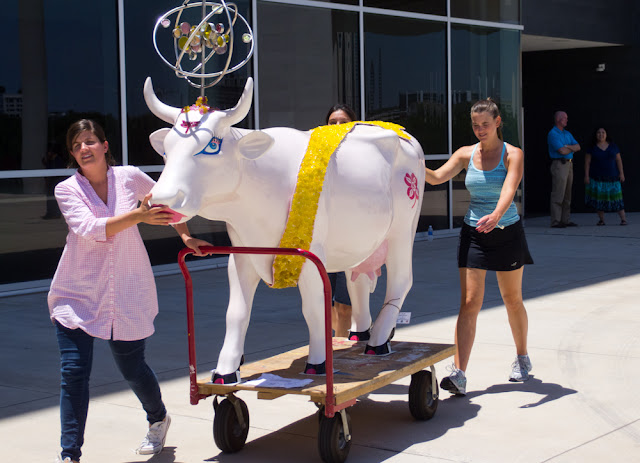 Being a cow wrangler isn't always as glamorous as it's made out to be.  The cows can be tempremental at times.  Especially the ones with tiaras.  Olympus xz-1. 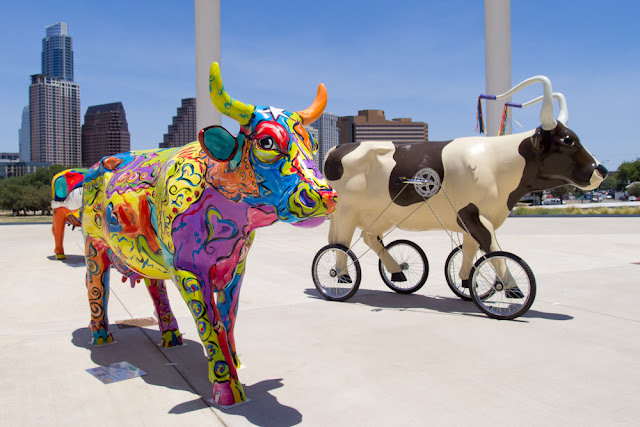 While I love the cow with the wheels and gears I hope it's not a preview of my new bike....
Olympus xz-1. 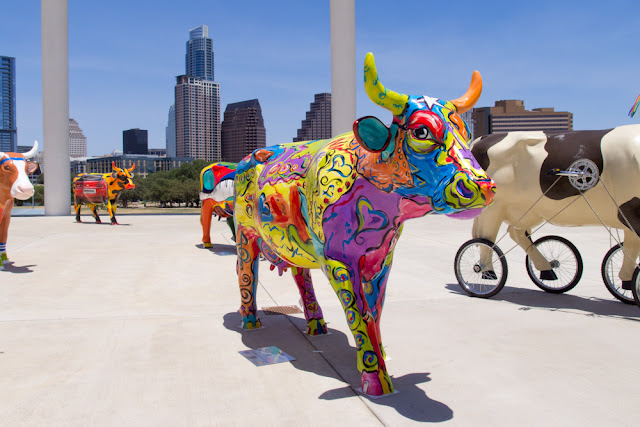 Being serious for a second I really like the look of the widest angle setting on the Olympus xz-1 camera.  It's bright and contrast even though I was shooting at f3.5 in full sun.  The VF-2 made shooting in full sun, and shooting low angles a lot more comfortable.  Coulda done this with an iPhone but it probably would have crippled me...... 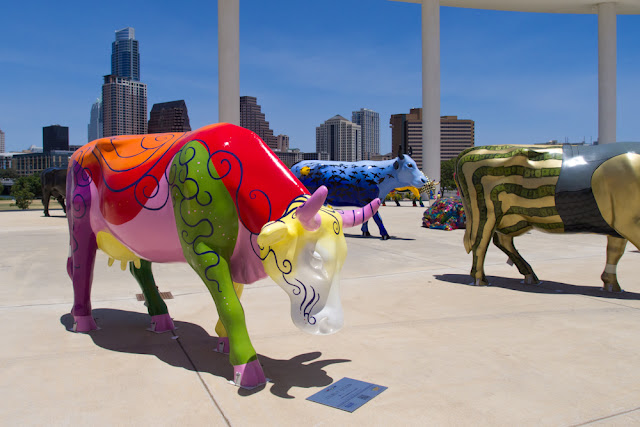 Another example of the nice color, exposure and wide angle rendering of the camera. 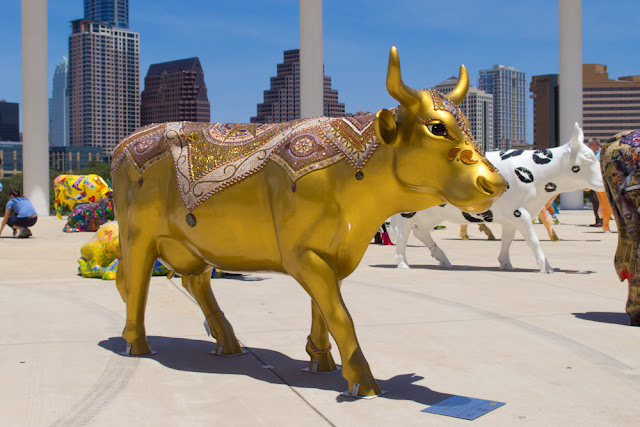 What budget deficit?  We've got the golden cow.  Wait.  Isn't there some Biblical tie in here?
So now I've come to the end of another long week and I'm tired and sore and behind on my schedule for writing.  That just means next week I'll have to write more.  Don Giannatti and I talked this week and decided to push the lighting workshop in San Diego back toward the end of September.  We were both getting calls from lots of friends and strangers who wanted to take the class but had conflicts with kids going back to school or end of the Summer family vacation plans.  Stay tuned for more info on that.
I'm a little bummed about all the BS that's going on in Washington, D.C. over the budget deficit.  I don't care what your party affiliation is or which leader you personally think is the great Satan but I'm starting to feel businesses that were on firm recovery footing pulling back a bit and re-adopting that nasty, "Wait and See" attitude.  And that's not good for any of us in the creative industry.  We're lower on the food chain and some of us were just starting to see food on the chain again when all this crap bubbled up.
It's kind of wild when you own your own business or are otherwise self-employed.  If the economy implodes again there is no unemployment insurance for us.  The salary jockeys in most states are going to get their 100 weeks or 2,000 weeks or whatever of unemployment payments but when our last job is over and the market collapses we say hello to our personal bailout.....it's called our savings accounts.  And if you are a fellow photographer I hope you've been rebuilding yours lately because when these liberal and conservative numbskulls (who have NO skin in the game) start playing around with the world's largest and more rigorous economy you might need it.
Sometimes I feel like the neighbor who just watched the nuclear reactor manager next door give the keys to the facility to a bunch of teenage boys on high fructose sugar and Red Bull.  Consequences be damned.  Well, at least we have the cows to keep us company.......
Posted by Kirk, Photographer/Writer at 18:10 10 comments:

If' you've been to the blog recently you've seen me post a number of photos from the "square years."  I've never been stylish so you can presume I just mean the years and years that I shot with square format cameras.  We all know why photographers largely abandoned their groovey, cool film cameras in the mid-part of this century's first decade but now I'm going to look at the advantages of going backwards to an older methodology.  It all has to do with mindful behavior.
But first, the seductress: 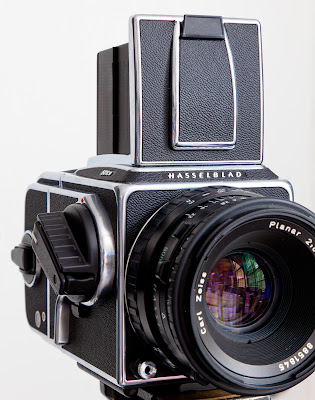 We had many good rationalizations for moving from film to digital.  Not all of them worked out the way we expected.  The first rationalization was the money that we'd save by not having to buy film and polaroid.  We'd save a second fortune by not having to pay for processing and scanning.  And, finally, we'd save a fortune because the immediacy of the process would free us up to do more and enjoy life.  So, what did we get?  Some good and some bad, like anything else.  We gave up a slower pace and we lost some months in re-training to become color separator/experts.  We got the nod to shoot lots more stuff but now we're still at a loss for how to store it for the duration.  We got out of the darkroom and into our Aero chairs.  We stopped having to buy archival pages and sleeves but we're filling hard drives.  All that stuff seems to be basically a wash.  For me the two big losses were the shrinkage of format choice and the abandonment of the MF depth of focus characteristics.
Everyone tells me just to crop but there's a psychological shove that makes us conform, even if only subconsciously, to fill whatever space we're given.  We see it on the edge of the frame so we figure out how to incorporate the edge.....  But I want to see things through the camera the way I want to see things.
I've said it before but it also bares repeating that the look for the focus "fall off" is profoundly different --at the same camera to subject distance---between 35mm sized sensors and a full on frame of medium format film.  Much different.  It's not just a question of shooting an 85mm 1.4 wide open.  The stuff I shoot at 150mm f4 looks different.
In the end though all choices are equally valuable.  I like shooting m4:3rds at times just as much as I love shooting 35mm full frame.  And, when time is short and budgets are shorter, it's good to be able to knock stuff out with digital.  We just should not forget that there ARE times when budgets and time are less pressing and we might have the idea for images that just plain work better big and fat and on film.
I'm not giving up digital.  I'm not going back to a film workflow.  But I'm re-embracing MF film for my own sake just because it feels so right to me.
I spoke of an epiphany and I should share the moment the light bulb came on over my head.  A few years ago I made a "greatest hits" book of my favorite black and white portraits.  Just so happens they were all squares and all shot on either a square format Hasselblad or Rolleiflex.  I found a cool square book and flush mounted them all.  I started showing that book along with a more topical book, filled with 13x19 inch color prints from digital files.  The digital files were from Leaf digital backs, a Leica M9, Canon's of all stripe, and some savory Nikon files too.  And when I showed the color book people would smile and nod and say stuff like,  "That's pretty nice."  But, young and old,  when I showed the square book people slowed down and stared at the portraits and said stuff like,  "Oh my gosh!  These are incredible."
I put two and two together and it equaled the working methodology I'd evolved working with my preferred tools.  I can have it both ways.
Posted by Kirk, Photographer/Writer at 16:11 No comments: