Dialing in your camera at the opera. The Sony a77 does Pagliacci. 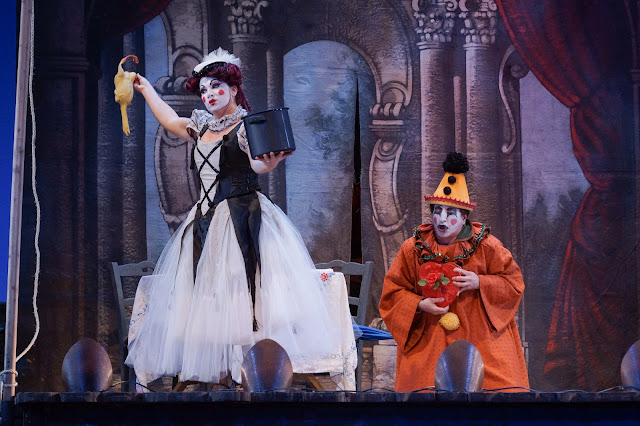 "The Jpeg engine! The Jpeg engine! Nothing good can ever come from the Jpeg engine!" Hmmm. I always wonder when I hear people trash or praise the Jpeg performance of their digital cameras whether or not they ever took the time to do a little fine tuning. While manufacturers work hard to make their Jpeg files one size fits all it's dawned on me over the years that the same manufacturers would not have gone to all the trouble to wedge in parameter fine tuning controls and different color palettes if they didn't understand that everyone wants something different and they can actually get it with a little metaphorical elbow grease.

I'll admit that the Sony a77 Jpeg files were giving me some issues in the early days. The contrast was a bit wonky, the noise reduction too severe and the saturation was a bit much. Mostly my fault, I can see in hindsight, for slavishly setting the camera in Jpeg beginner mode: Standard, and just hoping things would turn out the way I wanted them to. The reality is that using a digital camera in the Jpeg file mode is a lot like shooting slide film. You're locking in settings while you are shooting.  If the color is a little off you'll need to correct it in post but you'll find that you degrade the files a bit every time you make a change.

My thinking on working with Jpeg files got changed when I started shooting more video in DSLRs and when I started trying to color corrected the video I'd shot in Final Cut Pro X. If you set the sharpening in your files too high (because it looks nice on the LCD screen) you'll regret it in editing because there's no way to turn it back down again and bad sharpening looks worse and worse as you go along.  Same thing with contrast.  And same thing in spades with saturation.

From everything I've read on video production sites, in conversations with DP's and directors who work with digital video files, everyone has the same suggestions: Turn down the contrast, the saturation and the sharpening and add them back, to taste, in post processing. To this I would also add: Get your color balance as close as you can. Since these guys can only do limited global corrections in video post production it make sense and I've been zeroing in my working methodology for using Jpegs using this idea of turning everything down for a while now. It works.

At this point someone with way too much time on their hands will chime in and tell me that everyone should just shoot RAW. While it's a nice option it does take a lot of unnecessary resources (most importantly, time) and it's not always necessary. Figure it like this. I shot 1500 files at the Austin Lyric Opera dress rehearsal of the opera, Pagliacci, last night. The newspapers and arts websites are anxious to get some pictures in their hands.....today.

If I'd shot RAW files with my Sony a77's each file would be around 25 megabytes. That works out to about 37.5 gigabytes of information that needs to be ingested into Lightroom from multiple cards, Lightroom needs time to render standard previews and then, after a much slower process of file cleaning and enhancement, it will take hours to output one or two megabyte Jpegs that the media will want to use. Honestly, newspapers and web masters aren't looking forward to getting 16 bit, 70 megabyte tiff files. Probably would not even take the time to open them....

If I shoot large/fine jpegs I'm looking at around 6 to 7  megapixels per file or around 10 gigabytes of images to work with. I was able to do all of my post production and outputting in a couple hours this morning. And the files look great. They all have been downsized from 24 megapixels to  a little bit bigger than 12 megapixels. I applied a bit of sharpening to the files which they accepted very gracefully. In fact, I am so much happier with my flesh tones and noise reproduction that I'll try to shoot most of my fast breaking projects this way.  So, how did I shoot last night? 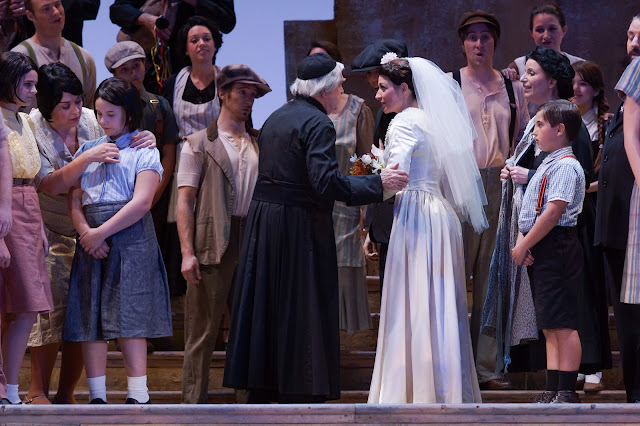 I set up my cameras to work in Jpeg using the largest files size and "fine" quality. There is one step above fine called, "extra fine" and I'm sure that if you run the files through a thorough diagnostic test you'll see a difference on the charts and graphs. Will you see a difference on the web or in newsprint? Highly unlikely.  This setting gives me almost 1,000 potential shots on an 8 gig memory card. It also saves on battery power since it requires more electrical juice to write the large raw files.

I set the Jpeg "creative" setting to standard and then I go into the menu and dial the contrast and saturation both to minus one. While I used to shoot my Jpegs with a +1 sharpening setting I've dialed back to zero and I add a bit of sharpening in Lightroom. The next thing I do is to make sure I'm in the right ballpark vis-a-vis color balance. Not necessarily for accuracy but for pleasing colors in the output. The lighting designer used a very blue palette for several parts of the opera and I wanted to keep that psychological effect but I wanted the scenes to render a bit warmer so I set a custom K temperature while looking at the scene in the EVF. Using the EVF instead of analyzing stuff on the rear LCD means I can block out the ambient light that will effect my take on the color. I worked mostly in the range of 4200K to 4400k to make the colors more neutral. While I liked the cool blue washes in the actual show I would hesitate to send files that were as blue to editors since they would see very monochromatic in print. 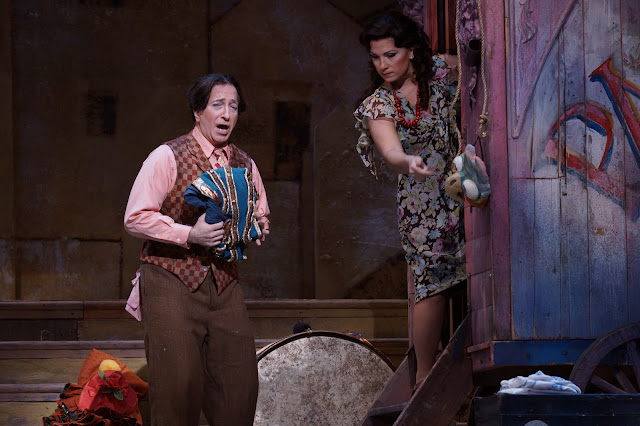 I've also started to always use the high ISO NR in its lowest setting. At anything under 1000 ISO it looks great and doesn't give me the plastic look that too much noise reduction generally imparts. This makes the a77 an ISO 800 camera for me. I'll go to ISO 1600 in a pinch but 800 is perfect. And perfectly usable. With good stage lighting my spot lit principals were usually in the f3.5 at 1/160th range. Seems just right for shooting a stage show. 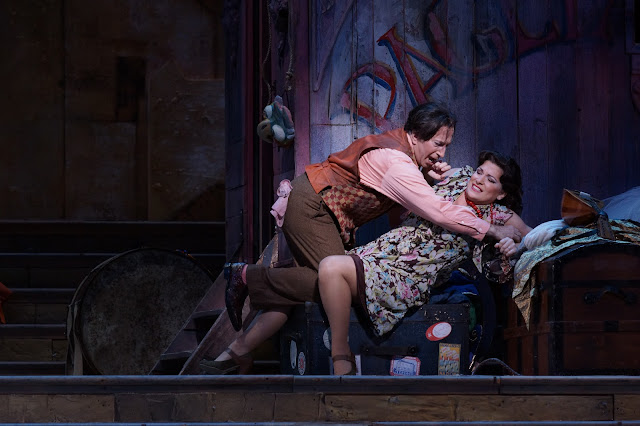 Getting your Jpegs into a good flow helps you be a bit more disciplined in shooting RAW as well. Recent Jpeg images we've provided to another client in town recently were used highly cropped on large posters and I was amazed at just how well they worked. There's so much we see on 27 inch screens that's just not relevant to the way images are routinely used.

Finally, if you have the ability to do a micro focus adjust on your lenses by all means, take advantage of that and do it right. My 70-200mm f2.8 G series lens has become a brand new optic for me after half an hour of adjustment and testing. All in all I'm happy with my new Jpeg shooting routine, my lenses and my a77 bodies.  Good to have stuff dialed in. 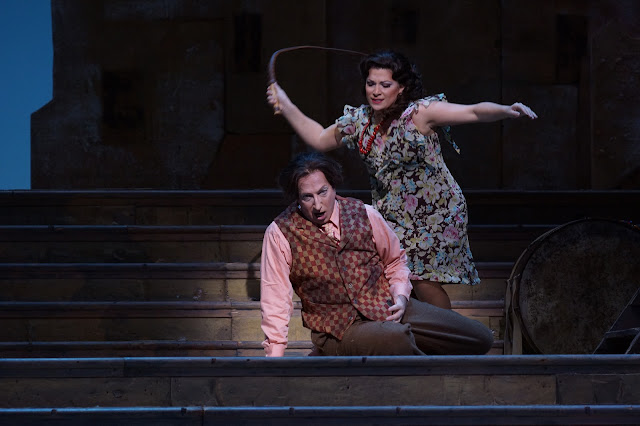 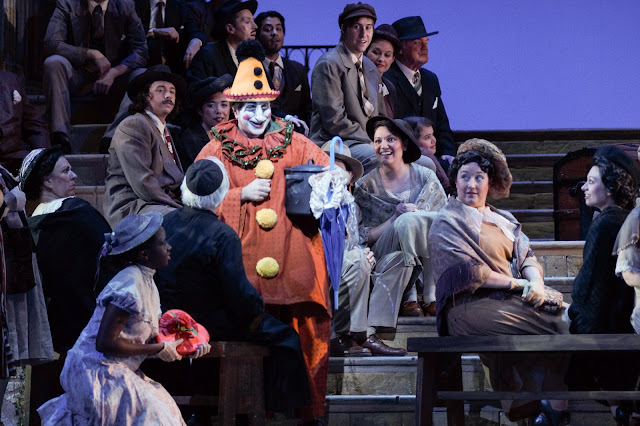 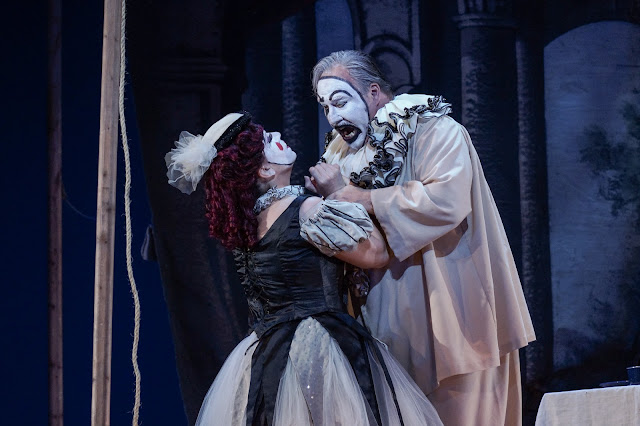 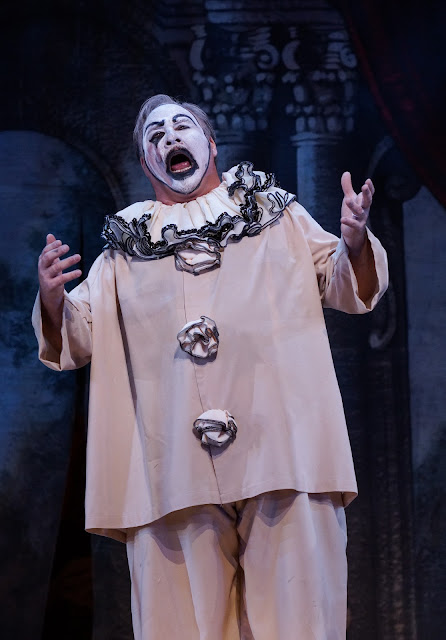 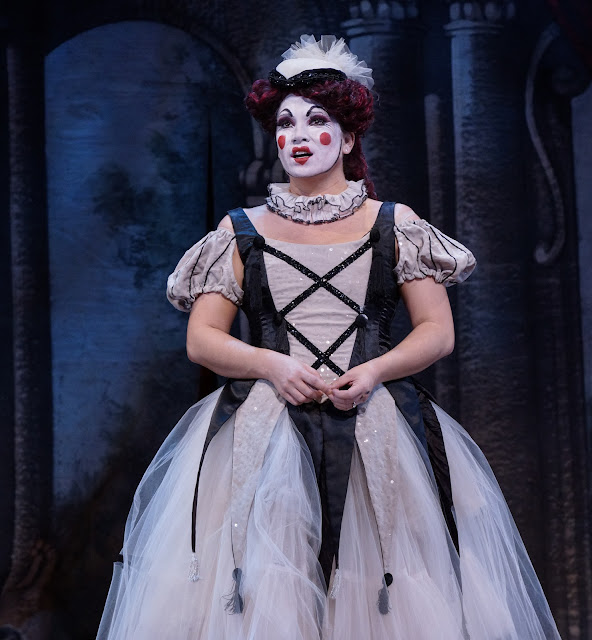 Finally, if you are willing to go into each color setting and do some manipulation with the color controls it's very likely that you can get close to the overall color palette of most camera families. The tend to put all these controls on the cameras so you can have your images pretty much the way you want them. Might as well use em.

Did I enjoy this rendition of Pagliacci?  Yes, very much. The people at the Austin Lyric Opera did a fabulous job. This is a great opera for beginners. It's very much fun and very accessible. If you are in Austin pony up for some tickets and give it a shot. I can pretty much assure you that you won't be disappointed. Culture. Have some.

In other breaking news of vital importance to our Canadian readers: You now OWN the copyright to the images you create, commissioned or not!!! Read more: http://www.petapixel.com/2012/11/07/canadian-photogs-now-officially-own-the-copyright-to-all-of-their-photos/

Posted by Kirk, Photographer/Writer at 13:20 3 comments: