What is the single best camera of all time? That's easy...

It's the Leica M3. And I was going to write a long and passionate review of that amazing rangefinder camera but in the process of doing a little research I came across a really wonderful review of the camera by none other than Mr. Ken Rockwell.  Yes, yes, I know Ken can be zany and self contradictory and bombastic but this is a damn good overview of a camera that had an important part in the maturation process of photography. If nothing else his opening photograph of the M3 is gorgeous.  You have to give him credit for that...

Have a different idea of what might be the best camera of all time? Feel free to post your opinion in the comments. We can argue long into the night.....

Posted by Kirk, Photographer/Writer at 10:39 37 comments:

Number four in the top photographers of the twentieth century. 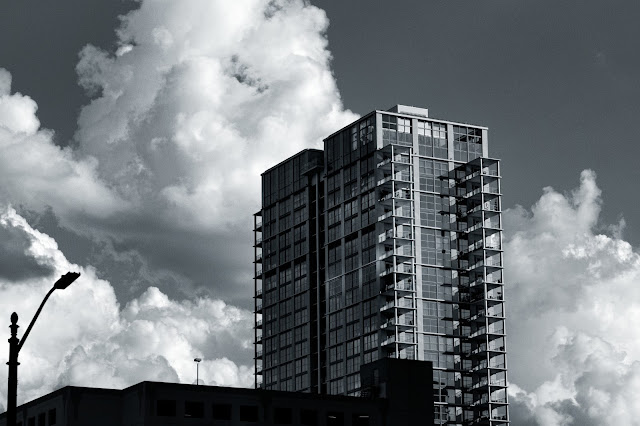 This is so hard. There are so many great artists that came of age in the previous century. There are the obvious ones like Alfred Steiglitz whose "Equivalents" really made photography of abstracts and enhanced landscapes into a respected subject matter. He was a ferocious champion of photography as art and introduced Americans to a host of great, European painters as well as a generation of American photographers to the the gallery scene. As much as I admire his work and his drive to legitimize art photography there are few images of his that really intrigue and move me. Maybe his wonderful image of O'Keefe's hands or the Flat Iron Building in a Snow Storm in NYC.  If you are curious about Alfred Steiglitz (who was married to famous painter, Georgia O'Keefe) you can get a great sampling of his critical and photographic work in this book:  Alfred Steiglitz: Photographs and Writings.

A whole generation of photographers seems to be obsessed with the work of Walker Evans but to my mind he seemed to be the first photographer to embrace the idea of having an art historic manifesto to accompany his black and white images. While he worked for early iteration of Fortune Magazine, and his black and white images of walls and old houses and depression era (largely unpopulated) street scenes have much art historical merit on some levels it reminds me of the atonal  and experimental music produced by 20th century music composer,  Karlheinz Stockhausen.  Heady stuff, intellectually, but practically speaking: unlistenable. Would I call is 'aloof'?  There is no single work by Walker Evans that comes into my head and my imagination even though I've seen his work over and over again. His most important work, in my estimation, is the work he did for the FSA during the depression. His portraits of tenant farmers and the unemployed from that era are iconic and powerful; it's his more cerebral, personal work that leaves me cold. He's an important fixture in the pantheon of 20th century photographers but you'll have to decide for yourself. This book is widely considered to be one of the best looks at Evans. :  Walker Evans: American Photographs: 75th Anniversary.

People who read the Visual Science Lab have been guessing all week that one of my five top photographers of the 20th century would be Elliott Erwitt. Not so. While I've enjoyed his work and collected his books over the years I really like the work the way I like the old Seinfeld show on TV. Every week you'd get some sort of wry insight into modern, urban culture. It's the same with Elliott Erwitt. There's tons and tons of wonderful, gracious, poignant and comedic work. Clever and well seen juxtapositions. But my sense is that it's all very good but not earth shattering. Elliott Erwitt is an ultimate practitioner with a depth of intelligence that, because of its relative paucity in general culture, is elevated in our estimation into a pantheon in which he just doesn't fit.  He is, without a doubt, a photographer's photographer but my sense is that his real genius is being able to spend the greater part of life having fun with his Leica, walking the streets and sharing his visual sense of humor. A wonderful contribution to our collective enjoyment of well done photography but not epochally breathtaking. Here are some of my favorite Erwitt books: Elliott Erwitt Snaps, Elliott Erwitt Paris, Elliott Erwitt Personal Exposures,  and Elliott Erwitt: On the Beach. You should at least own his thick but inexpensive book of Dog photos....Dog Dogs. It's a whopping ten bucks...and there's more good work in there than most photographers will get to in a lifetime.

One of my readers presumed that we had similar tastes and suggested that William Eggleston would be on my list. Nothing could be further from the truth. While a favorite of museum curators and gallery owners I can think of no 20th century work (other than Stephen Shore's) that leaves me with the feeling that I just saw ten episodes, back to back, of Masterpiece Theater's rendition of George Elliott's novel, Middlemarch. But not even the good episodes...  Our modern equivalent is probably Andreas Gursky....  OMG, COLOR !!!!!! And suburbia writ large....  Yawwwwwwn.
If you find you usually disagree with me vis-a-vis aesthetics you might want to embrace Eggleston.  William Eggleston's Guide might is as good a place as any...

So, who do I think is another one of the five important photographers that strode like a colossus over the world of 20th century photography?  Well, I think it would have to Josef Koudelka.  Don't know Koudelka? You should. His work has echoes of the images of HCB but with a hell of a lot more edge. His black and white book of Gypsies is the most powerful single book I have ever experienced. He shot close, intimate and powerful. While not as prolific (by a factor of thousands...) as People like Elliott Erwitt he is like the ultimate reduction.  The work is distilled down and made concentrated. And his backstory is an important one for a generation of soft and hazily committed photographers. Why? Because he lived this.  If you own five books of photographs by masters this should be one of them:  Gypsies (the collector's edition) This one is pricey.  Here's a version for the rest of us: Gypsies.  Here's a good sampler of his work from all over the world: Joseph Koudelka.  And here's one I'm just about to order for myself: Chaos.  It's a departure from his earlier work. Landscapes with a panoramic camera but with a very different approach to landscapes.... challenging but brilliant.

Joseph Koudelka is one of my favorite photographers of all time. But putting together a list of the top five, while a fun exercise, is also a silly undertaking. There's so much good work out there to discover. I have a "B+" list with nearly 100 photographers on it. Every one of them has shaped my generation's visions as photography makers. Everyone of them is an important part of the mix.  You don't see the foundations of a house but all the material you don't see is as important as the material you do...