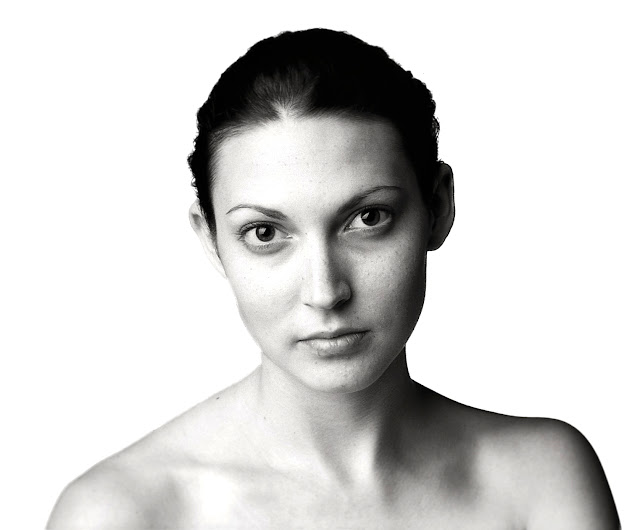 I've been talking about my favorite lenses lately and I thought I would be remiss not to mention my all time favorite portrait lens, on that I may re-buy and have adapted to the Sony a99, if possible.  That lens is the 90 mm Summicron for the Leica R cameras. Sharp and yet flattering, it is a chameleon of a lens. I used it almost exclusively when I (rarely) shot 35mm film portraits back in the 1990s.

The initial images were wonderfully detailed on film but the overall look of the file was of lower contrast that some of the other system lenses, like the 80 Summilux. The images from that lens (especially portraits) came into their own when printed on slightly contrasty papers. Now, in the age of scans and digital optimization I find the lens's rendition the perfect starting point for portraits. The slightly lower contrast does a great job retaining both highlight and shadow detail and, as you build constrast it reveals a strong set of bones under the surface. You can go a fair distance in raising contrast without blowing out highlights or blocking up details.

And for me the 90 on a full frame is just heaven. Perhaps it is having used a 90mm focal length that keeps me from warming up to the 85s as portrait lenses. That may be why I like the old 60mm so well on the Nex cameras.  I think that by the time we are photographers we've developed an unconscious predilection for certain focal lengths and our allegiances forever lie there. In situations where commerce and profit are removed I have no desire whatsoever to shoot with a 35mm or 28mm lens. Wider is less appealing still.

While I come back again and again to the 50mm lens for situations that reward context the focal lengths between there and 90 are like "no man's land" for me. Vague and fruit-less.  Ah, but 90 to 135 is so sweet. I often fantasize about a future time in which I'll retire and walk the earth with a camera and a small back of lenses. From 85 to 135mm. Nothing wider, nothing longer. Because, that's the way the world looks best to me.

A psychiatrist and I discussed this very issue over coffee one day. He suggested that wide shooters were unable to commit. Commit to a framing. Commit to essential elements and to commit to a disciplined use of space. Longer shooters, he suggested, were decisive and loved cutting down a frame to the essentials. Whether he said this to ease my fevered brain, knowing my choices, or whether it was an epiphany of his years of practice, I take it to heart and now harbor yet another photographic prejudice.

Doesn't matter. No one is keeping score. Just thought I'd trot out my favorite...
Posted by Kirk, Photographer/Writer at 14:29 18 comments: 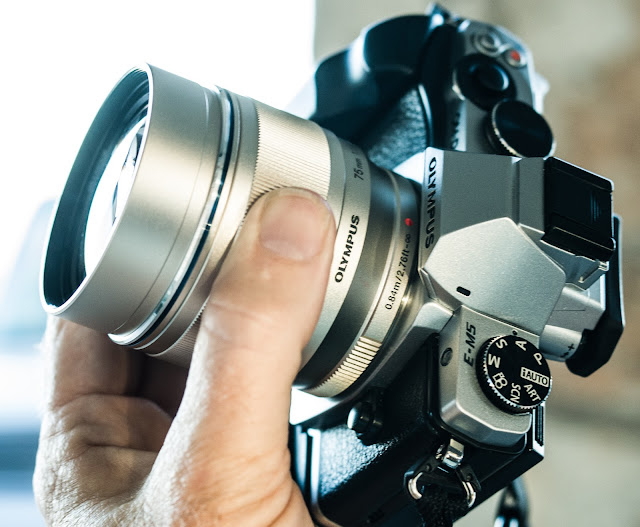 Okay. I've been shooting with Sony stuff for almost a year now and I'm pretty happy with it but.....every time I have coffee with my friend, Frank, he (unintentionally?) brings along some little Olympus jewel, the allure of which is absolutely undeniable. Yesterday it was the absolutely, drop dead gorgeous, Olympus 75mm 1.8 lens, If you shot in the 1970's or the early 1980's one of the lenses that everyone had and used frequently was the 135mm focal length on a regular 35mm camera. That focal length, coupled with a fast aperture, does some really nice stuff. It compresses compositions so you can "stack" stuff in the frame in a very pleasing way. If you are focusing on subjects in the 6 to 10 foot range and using apertures faster than f4 you get a deliciously sharp subject and a background that is wonderfully soft and devoid of distracting detail.

This lens is about 10% longer, relatively, than the 135s on 35mm but it's certainly in the ballpark.

I've owned the Pen 70mm f2 for years and used it on my Pens and now on my Sony Nex cameras. It's a very useful focal length and an antidote for all the endless wide angle crap that seems to be today's over riding style.

From all reports the new lens resides in a whole different world than the older optic. Sharp wide open and sharp right down. Silent and speedy focus on a Pen OMD. And since it's sharp at f1.8 you get the same basic look that we used to get with our big, heavy 135mm 2.8's but without all the dimensional sturm und drang.

If you are a Micro Four Thirds user you might want to read what DXO says about this lens. Spoiler alert: It beats the Leica 25mm in their tests!

If only Sony made lenses like this available. The Nex system would be an incredible value proposition. As it stands now the bodies are really great but the lens selection? Not so much. This lens, along with the 12mm, the 25 Leica, and the 45mm 1.8, goes a long way to cement Olympus's ascendant position in the new world order of cameras. Every other camera maker should take note.