Talking about a lens is one thing but shooting with a lens is quite another. Here's some stuff from the 35mm 1.5 Cine Rokinon. 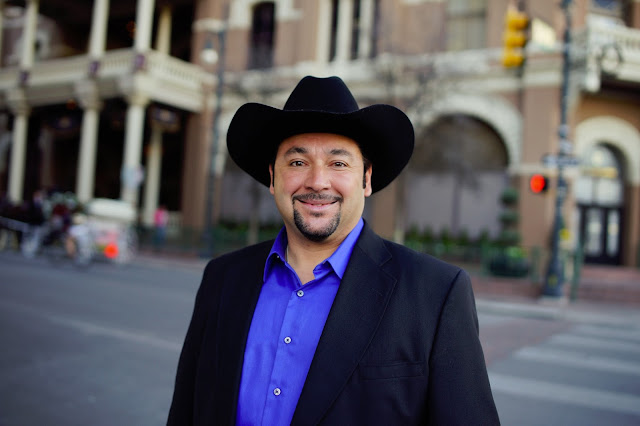 Oh my gosh. I'm having a blast with this lens. A couple years ago I reviewed the Leica 35mm f1.4 Aspherical on an M9 body. I shot most of my images on a 105 degree day and it was miserable but the one thing I discovered is the one thing that is counterintuitive about an ultra fast 35mm lens: the real power is getting the subject in context and still being able to drop the background convincingly out of focus. But in order to do that you must have a lens that has the same properties as the $5,000 manual focusing Leica lens; it must be sharp at and near wide open. Not all of the fast lenses from the big boys do that....But I'm going to throw in this spoiler and say, that in my opinion the Rokinon (Samyang) 35mm Cine 1.5 lens does. With ease.

The image above is a quick portrait of a stranger on 6th street from this afternoon. We were in open shade and I walked up and said, "I like your hat and the way it goes with your jacket. Would you mind if I made a portrait of you?" He was flattered and more than happy to stand there, in front of the famous Driskill Hotel, for an extra thirty seconds or so. I used the focus peaking built into the Sony a99, got a quick focus at f2.0 and shot. If I'd been on a tripod and used the image magnification to focus at 10X the image might have been marginally sharper on his face. It's sharp enough for me just the way it is.  Is the Rokinon 35mm Cine 1.5 lens sharp enough wide open? Can't say. But I can tell you I think it's nicely sharp at f2.0...which is one stop down. And I think the out of focus characteristics are very nice in the background.  The contrast in the center, the part that's in focus is snappy damn good. 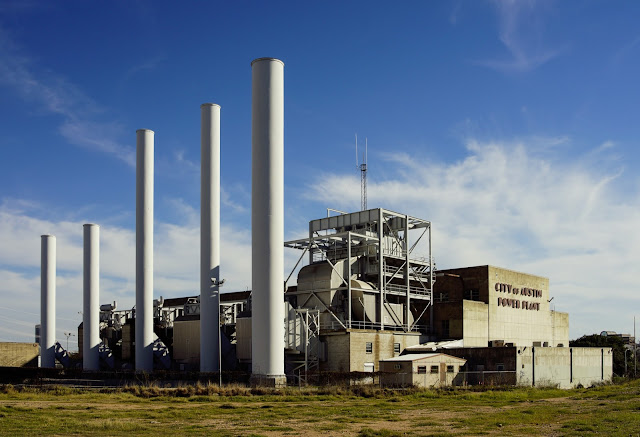 When I have time I have a new focusing routine for the 35mm on the Sony a99 in aperture priority mode. I open up to f2.0 or somewhere around there, get the focus peaking outlines where I want them and then stop down till I like the shutter speed and ISO combination. I'm generally looking for exterior exposures in the f5.6 and 1/500th category with ISO's around 100 or 200. 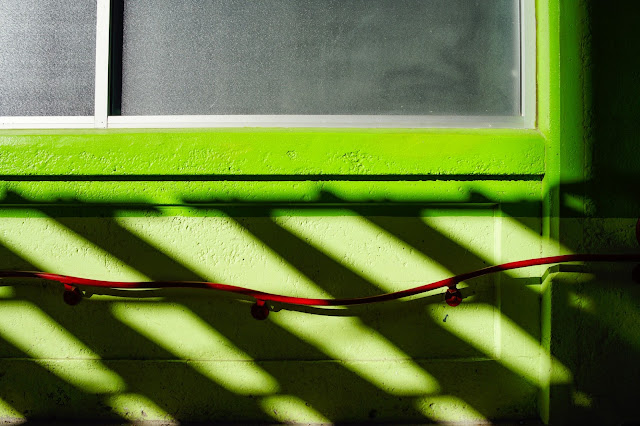 When I left the highly secure compound of the Visual Science Lab in my up-armoured and very discreet, Honda CRV I made the decision to try and shoot everything on my walk/test shoot at apertures from 1.5 to f5.6. I wanted to see how the lens performed in the meaty part of the curve. Any middling focal length lens is fine and dandy at f8 and f11. I shot the wall above at 2.8 and I think it's pretty juicy (technical term we testers bandy about).  I've been by this wall many times a year for many years and have never seen this pattern before. 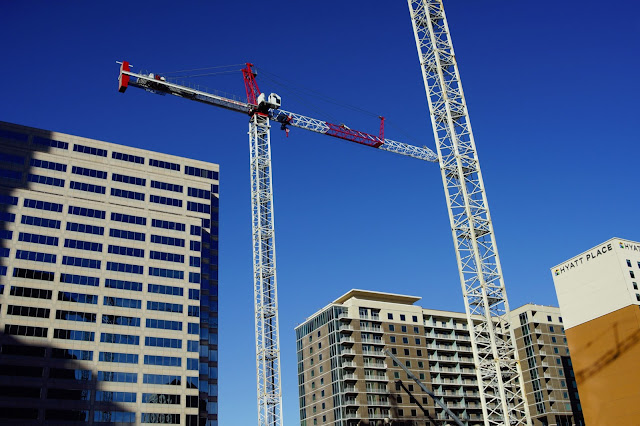 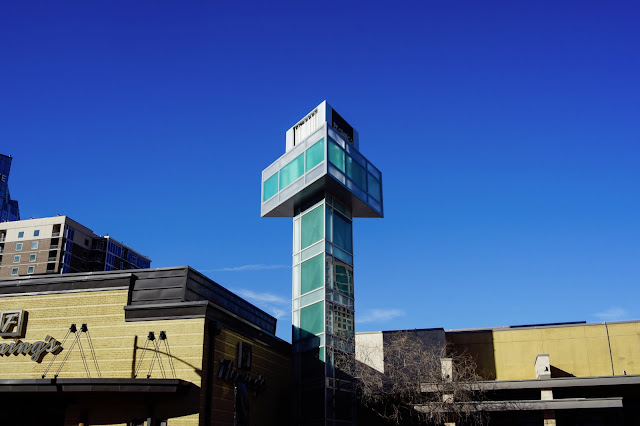 In easy circumstances (f4.0 and f5.6) the lens is unimaginably good. Every bit the equal of the Leica lens at these apertures. If you shoot on a tripod you should look no further for your 35mm optic. This one is all work and no play in the middle.

I walked over to the Hilton and photographed their ceiling (see below) and even near wide open the lens cuts the line between tones like a razor blade. 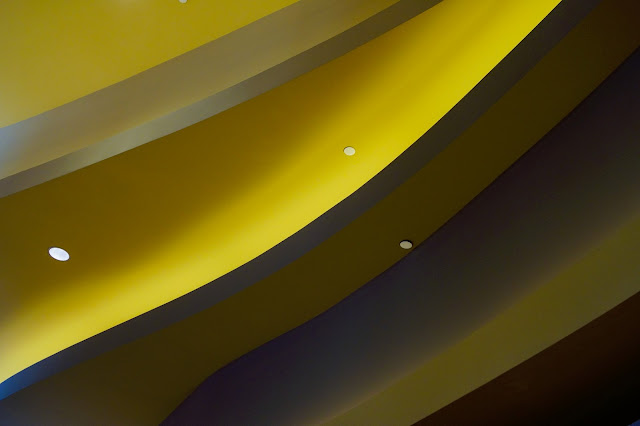 I shot everything as a Jpeg today and most of the images here are straight out of camera with perhaps a little exposure correction here and there. Some slight sharpening with the wide open   images. But I was amazed at the concentrated, saturated colors the lens consistently provided. The green temporary food trailer below is a great example. The green just oozes radioactive... 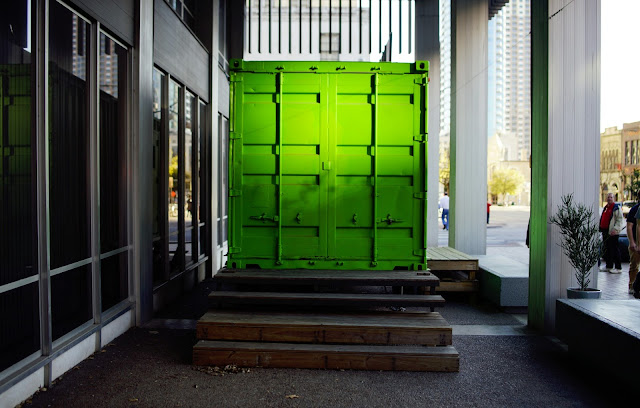 Near the end of my walk I started thinking that my evaluation of the lens would not be complete without a few little snaps at one of the "easy" apertures. Here (below) is an image of a building shot at f11. Seems sharp to me. Diffraction ignored. 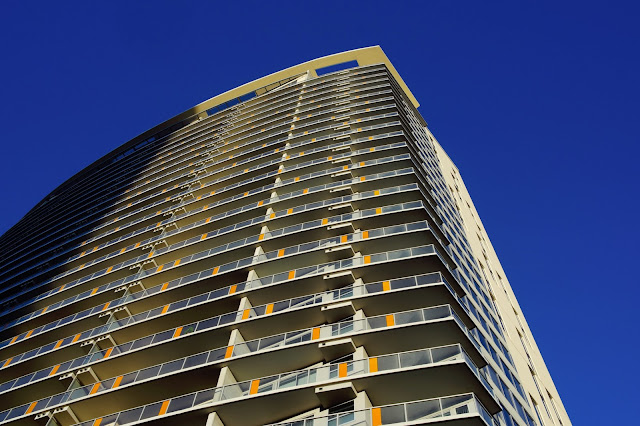 My early assessment of the 35mm 1.5 Cine Lens from Rokinon (Samyang) is glowing. The images speak for themselves. On monday I have one of my favorite models coming by for a little session. I'll sneak the 35mm in just to see what it does wide open at low light levels. But most of the session will be done with the 85 Rokinon. Both of the lenses are totally manual. I think that's cool. A bit of control and user responsibility are refreshing. Being in control (or the appearance thereof) is calming and affirming. I like it. More like this lens. Hello camera makers! Are you listening?

Someone asked for a close crop of the top image...... 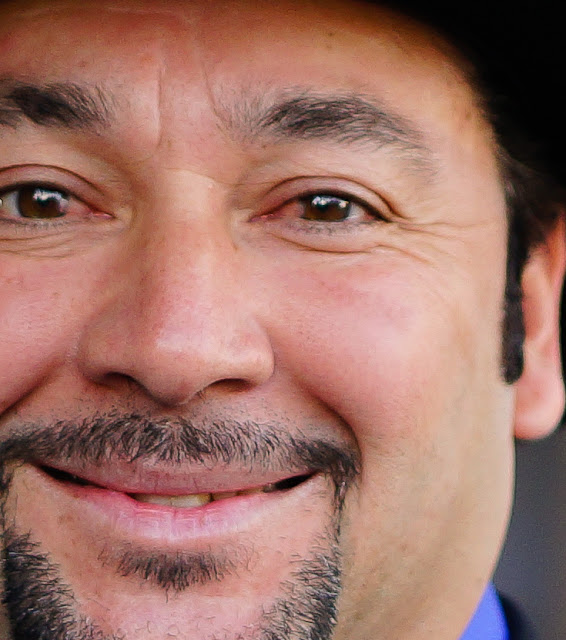 Posted by Kirk, Photographer/Writer at 19:59 13 comments: 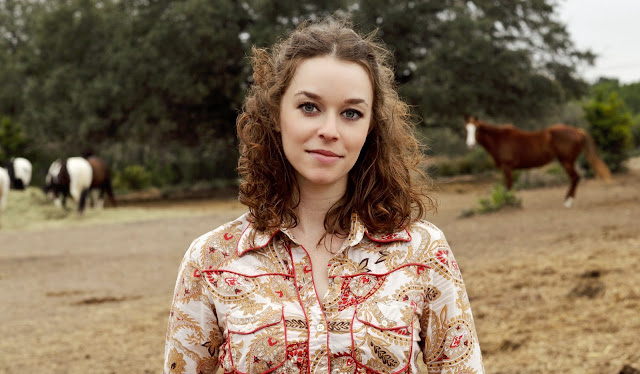 Posted by Kirk, Photographer/Writer at 13:43 5 comments: