Today the VSL Analysis Team is playing around with an interesting florescent light. 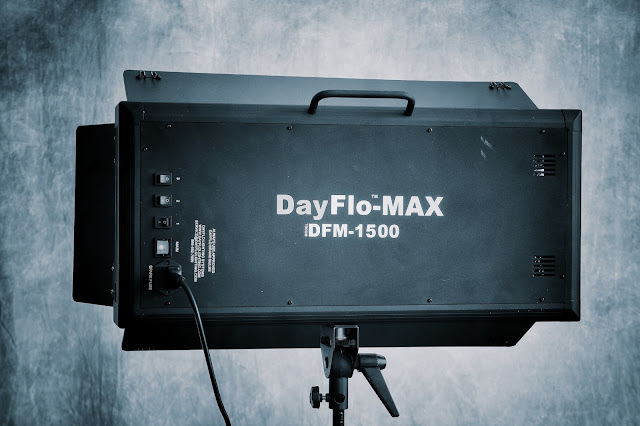 When I photographed and video'd Erin for Zach Scott a little while ago the video designer asked if I wanted them to budget the rental of some Kino Flo florescent lights in order to do our motion shots. (Kino Flo's were the first company to commercialize nicely color balanced florescent lighting fixtures for the movie industry on a big scale and they are now the "Kleenex" of florescent lights for the film industry.) I told him that I'd be comfortable in that project to use the existing LED lights we had around the studio.

Coincidentally a reader sent me a link to some cool looking florescents lights on the web and the photographers at the Boston Museum of Fine Art showed off their set of Alzo florescent lights a few weeks ago when I was there touring the facilities. I guess I got a case come cumulative florescence on the brain because I decided to order one and check it out. Above and below is an three bank, six bulb florescent fixture from Fotodiox. I'm pretty sure it will match the performance of the ones from Alzo since they use the same bulbs.... 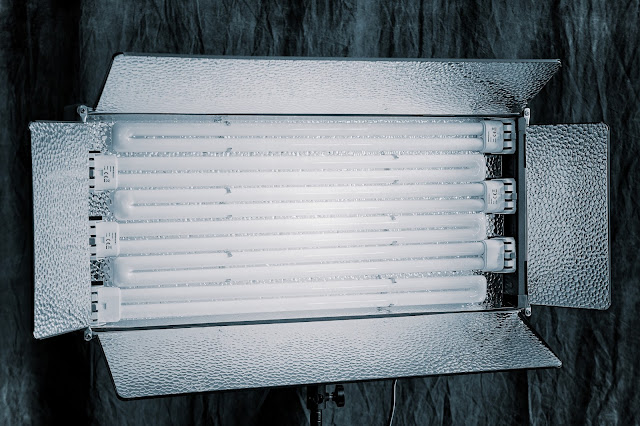 My light arrived on Thurs. evening, just before I needed to leave for Sylvia Plachy's presentation. I just had time to stick in the tubes and turn the shebang on to make sure it worked. The light is very bright and much softer than my un-modified LEDs. One sheet of one stop RoscoLux will make the feel and look of the light just about perfect. In essence it becomes a fairly small softbox.

I'm sure the same company in China that makes the LED lights for Fotodiox (and about a dozen other resellers...) makes these fixtures. The florescent bulbs themselves are Osram tubes and are made in Italy.

I played with lots of photo lights that used compact florescent bulbs when I was writing my book on Lighting equipment but I never tested the bigger panel style lights like these and the Kinos. But the Kino Diva has always been touted as a beautiful portrait and fashion light source and that sounds right up my alley.

I'm booked on conventional assignments on Tues. and Weds. and I'm waiting for another light fixture from the same company (using the same bulbs) to arrive on Weds. pm and then I plan to do a series of color and black and white portraits with them. The second fixture uses only two bulbs and I intend to use it as a background light. One bigger main light pushed through some tasty diffusion and one smaller source to separate my portrait subject from a dark background.

Why am I curious about these when I already have LED lights? Curiosity. I've explored LEDs pretty thoroughly. This will give me a chance to compare and contrast. It should be interesting. Even more in the next round of videos.

Posted by Kirk, Photographer/Writer at 14:54 12 comments:

Incorporating video into the mix. Doing art instead of commercials. Sony a99 "footage."

Erin Moves in Mad Hip Beat and Gone. from Kirk Tuck & Will van Overbeek on Vimeo.

Go directly to Vimeo via the link and see it in HD for the full flavor.

I wrote earlier this week about shooting video of an actress for projection on a giant screen. The video content was used as part of the set design and arc of the story for the Steven Dietz play, Mad Beat Hip and Gone. I just wanted to flesh out what we did and how.

As many of your know I do a lot of project work for Zach Theatre here in Austin. The production they are doing now is a play that investigates that period between World War Two and the 1960's, best exemplified by novelist, Jack Kerouac's book, On The Road. The play is about two young men who are in the car following Jack Kerouac and Neal Cassidy. It's really a wonderfully imagined play about the need for meaning and connection.

The set designer imagined a set that is framed by weathered and distress, corrugated steel. The heart of the set is really a giant projection screen some 34 feet wide and 40-some feet tall which pulses with still images providing scenery cues to video providing emotional resonances. Video designer, Colin Lowry, asked me to collaborate with him in making both still images and video that would be content for the play. We did images of the male leads that included driver's license photos and mug shots. We did silhouettes of one character's father, complete with a baseball glove. And we did slow, bittersweet video of the actress who plays the love interest of all the proto-stream-of-consciousness road poets.

To produce video that's interesting is always a challenge but much of the pressure is relieved, in this instance, by good acting on the part of the stage actors and the charismatic allure of the actress on video.

We set up a light gray seamless backdrop in the rehearsal space and it anchored the still and video work and gave it a visual consistency that held the projections together. I lit the background just enough so that it would accurately retain its tone. One broad, 5oo bulb LED panel, used directly.
We lit the actor with two 1,000 LED panels projecting through a one stop silk diffuser. We used a fourth light, a 500 bulb LED panel, as a kicker light.

I wanted to use the Sony a99 camera for the video because I was comfortable working with it, having done a number of interview and other creative projects with it, previously. I also wanted to use it because, in conjunction with a Sony 70-200mm f2.8 lens, used at f4, I could control depth of field and push out any detail in the background that might have been distracting. Amazing what you notice with forty feet of information on the long side.

Colin requested that I shoot at 24fps so I set the camera at 1/50th of second shutter speed, f4 and used the ISO to adjust for the correct exposure. When you implement fully manual exposure in the Sony a99's video mode you disable autofocus. Fine by me. I used the camera's focus peaking feature to ensure good focus under dicey conditions. It worked great.

Colin and I took turns directing and ended up with plenty of footage to pare down. Erin was a consummate pro and, since Colin wouldn't be using the camera audio, we were able to direct her verbally during the takes.

The video footage and the photographs ended up being projected digitally. And they looked incredible. The production has become a critical success already.

So today I decided that I wanted to share a bit of the video footage to show which choices I made in the creating it. I wanted inky black, dramatic shadows on opposite side of Erin's face from the main light so I used no fill. You can see the effect as she turns into the shadow.

I took the footage and did an edit in Final Cut Pro X. I  used a program called  Compressor to output the images as 1080p HD video in order to upload it to Vimeo. The music I selected is royalty free music that comes with iMovie 11 and is available across the system in the Apple OS. I'm not a sound designer and I'm sure there's better stuff to put in a music bed but you can always just turn off the sound and evaluated the visual stuff...

I am captivated by the movement and the tones as they shift across Erin's face. The video adds a really wonderful layer of context for the play. I hope you enjoy what you see here...
Posted by Kirk, Photographer/Writer at 12:16 5 comments: