Some more images from my new "test" camera, the Samsung NX300, and a few thoughts about the state of cameras. 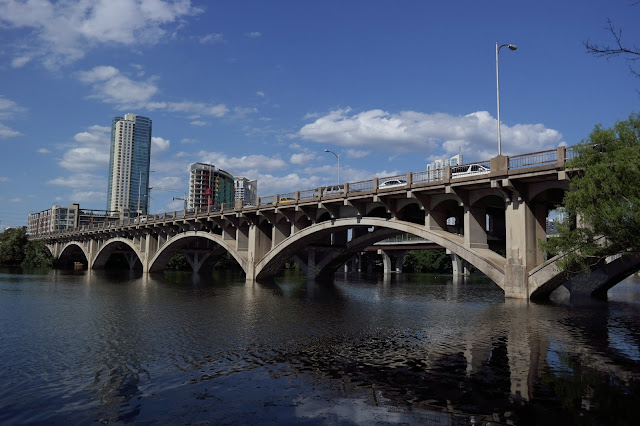 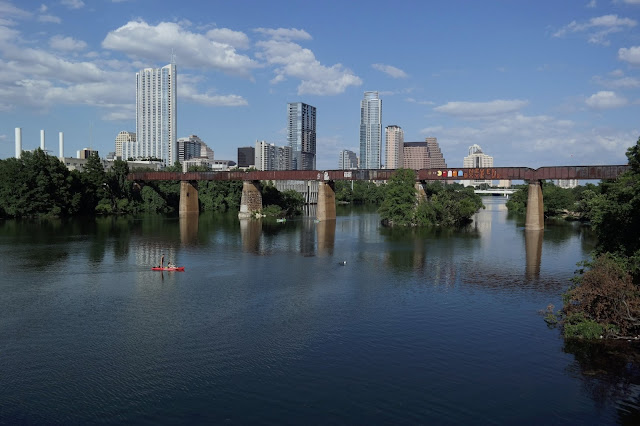 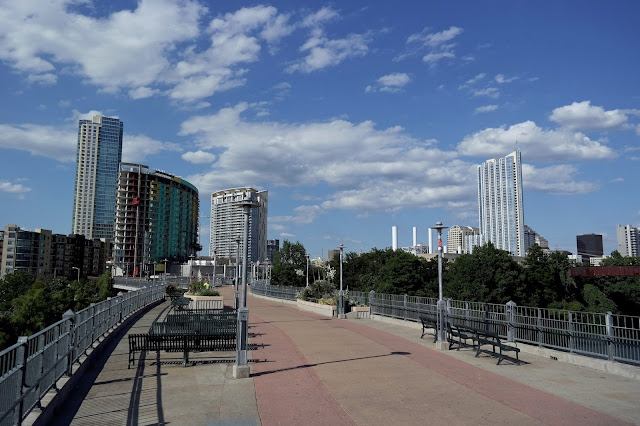 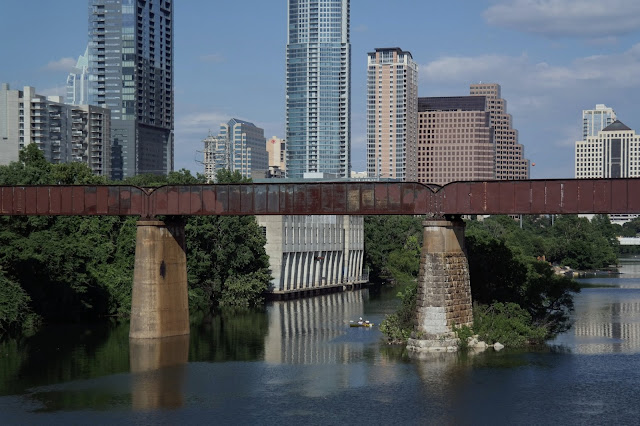 The intake for the old (decommissioned) power plant. 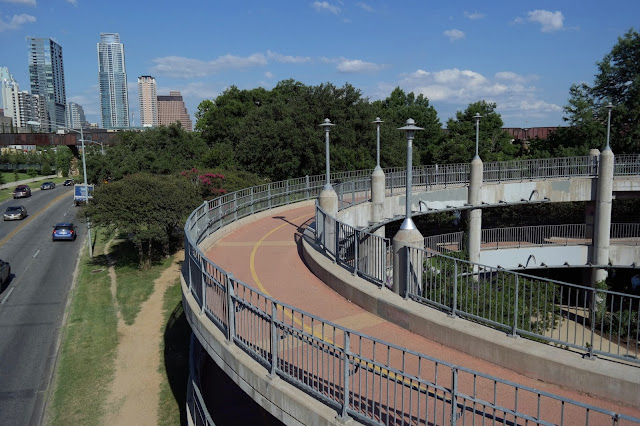 The curvy side of the Pfluger Pedestrian Bridge. 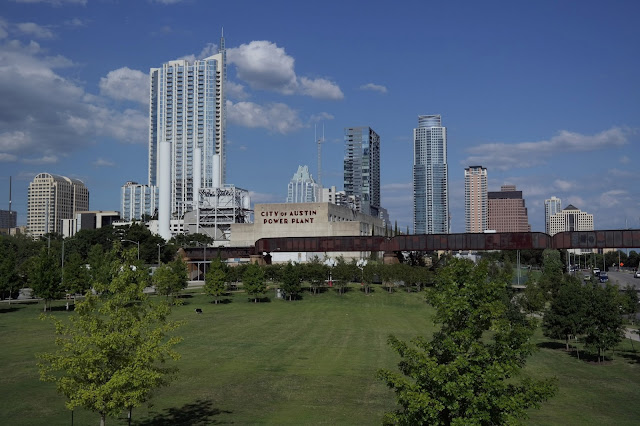 The old Power Plant with downtown Austin in the background.

I shot the images above yesterday afternoon as part of a nice, hot walk from Barton Springs Pool to the downtown Whole Foods store. I used a small, nimble camera with a fairly big (APS-C) sensor, and an inexpensive kit lens. I wound up using the same camera in a dark theater this afternoon. My friend, Colin, and his friend, Noel Gaulin found an overhead projector, some food dyes and other paraphenalia and they were doing pyschedelic, kinetic art (which they were recording to video on a Panasonic AF100) to be used enormously large for an upcoming play about Janis Joplin that will be staged at Zach Theatre. I was there and decided, in an impromptu way, that we should also have a behind the scenes video about some of the lengths to which our technical staff goes to in order to make great looking  live shows.

This little exercise in the dark showed me just how far camera technology has come. The camera was able to automatically correctly expose for the two faces surrounded by total darkness. Walls painted matte black darkness. The camera's image stabilization worked as well as the in-body stabilization in my Sony's and the focus stayed locked on while I moved.

All of this got me thinking about the nature of the business of photography and the rather rude intersection of camera design and art. We can lie through our teeth and talk about how important top notch cameras are or we can admit that just about every camera over $500 in the market place today can be pressed into professional service to make great images, the primary target for which is now the web.  There are still many situations where a long, fast, telephoto lens is critical and there are probably an equal number of situations where a good ultra-wide angle is a an imperative tool, but the camera bodies themselves have been, across the board, ready for prime time for years now.

I know it's generational and I know it's because I wear reading glasses now, but I wish every mirrorless camera....oh, what the hell!?...every camera came standard with an EVF. I really like the files I'm getting out of this little camera (NX 300) very much I just wish I could hold it up to my eye like a real camera without having to resort to a loupe for comfort and convenience. To my kid? No big deal. To me....hmmm.


20 really good megapixels on a sensor with wonderful color goes a long way to make up for a feature set that's one check box off for me...more later.

Posted by Kirk, Photographer/Writer at 17:32 14 comments: 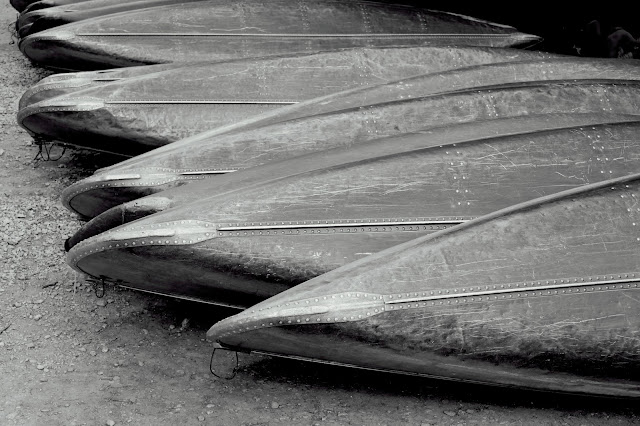 Yesterday morning was busy, busy but after a decent lunch with my first assistant for the summer and some monotonous paper work in the office I made two phone calls I had been dreading and then I packed up my new little camera and went off to Zilker Park. I parked the ultra-high performance Honda CR-V in front of Barton Springs Pool and took off for a grand walk through our downtown park.

After an almost ritualistic nod to the rogue swimmers who swim and frolic for free in the spillway downstream from the actual pool I walked on to the canoe rental stand. It was a hot afternoon, school is out for nearly everyone and the place to be was in the water or on the water. I liked the repeating form of the canoes (above) but I knew when I shot the frame that I'd want to see it in black and white. Sharp, snappy, contrasty black and white.

I am getting comfortable with my new, casual shooting system, the Samsung NX300. I have the kit lens which is an 18-55mm, and I have my Hoodman loupe for those times when the surrounding light is too bright to make composing naked fun. I have two or three things to say about the new camera. First off the files seem archly neutral in the "standard" jpeg setting. By that I mean the colors are very neutral and almost unsaturated in comparison to other consumer-targeted cameras. The same with the contrast range. I find myself tweaking up the contrast by 10% or so in post but when I do so I find that I nearly always like the rendition of skin tones in the more neutral settings. The other thing I notice is that the Samsung does a great job making files look very sharp on my monitor. Not sizzly sharp like you see on a lot of websites but detailed and micro detailed. In fact, the sharpening works so well for me that when I try to add sharpness it nearly always makes the images seem brittle and overdone.

I hadn't paid much attention to Samsung until now. I didn't have an opinion about their cameras and I never used on before but I will say this: Sony and Olympus should rush to Samsung, do some industrial espionage and find out who is producing their online owner's manuals and who is programming their camera GUI and menu system and then kidnap them, pay them cajole them and beg them to do the same for their cameras. I've learned the Nex menus and I'm good with the image quality and the hand/camera interface but it really shouldn't take weeks to feel comfortable with a menu. Two days, tops, for an experienced shooter. With the Samsung NX 300 I looked through the online manual once and I've never looked back. Nor have I been unable to quickly find and change any parameter. I don't know if that's the make it or break it for any camera choice but it's a comfortable way to present and leverage whatever benefits your camera might have.....

I will also say that the implementation of the touch screen is very good and the screen is mostly responsive. I prefer buttons but I know a whole generation of photographers who are being raised on iPhones will find it an almost transparent accommodation to their current system interface.

I read in one of the forums yesterday that I am being short changed by only having the kit lens but I disagree. I happen to be a big fan of kit lenses. I was happy when my Sony a58 came with a new and improved kit lens and I've made good use of it. I think if more people spent time really working on their fundamentals they'd see that the choice of lens and the quality of the lens might be, in most situations, the least of their photographic handicaps....

Why black and white canoes when there a beautiful people out in the world waiting to be photographed? Well, when I was in fifth grade I went to a YMCA summer camp and we had an overnight canoe trip. I took a number of black and white photos with an old, zone focusing Argus A-3 camera. At some point on the return voyage my canoe tipped over and many of my possessions, like my sleeping bag, my clothes and my fresh copy of the first Marvel comic book to feature the Fantastic Four, slowly settled to the bottom of the lake but the camera miraculously found it's way to my right hand and emerged unscathed as I treaded water. I tossed it into another canoe and then worked with my camp councilor to right my dodgy craft. The film went to the drugstore after camp and six or seven images of canoes, among some badly done images of marshmallow roasting, found their way back into my hands as 3.5 by 5 inch, deckle edged, black and white prints. It was an exciting time and the canoes triggered some memory ripple of a simpler time somehow faintly connected to photography. And there I am. 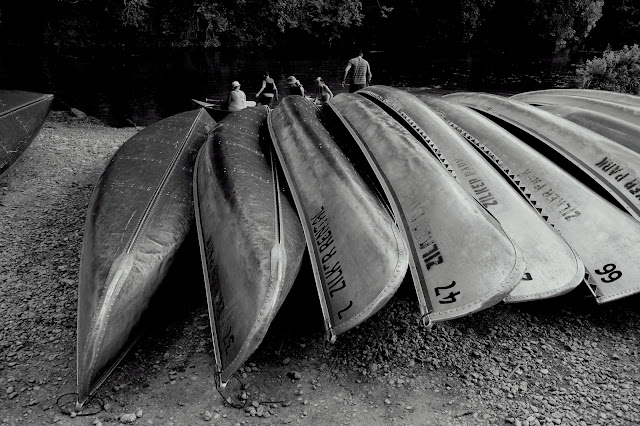 Canoe 2. Samsung NX 300. Converted to black and white in Aperture.

Posted by Kirk, Photographer/Writer at 12:50 6 comments: