What's working and what's not...

Life is always interesting. I've been playing around with a new camera and it usually doesn't happen quite this way. Usually I'll become interested in a camera because of the anticipatory buzz on the web and I'll get in touch with the camera brand's public relations company to request a test sample. Sometimes I bond instantly with a camera and sometimes it takes me a little while. Sometimes I never bond with a camera. Example? I could never get used to the Leica M8. The way it showed frame lines was a bit confusing and the impact of the shutter going off felt like a weight lifting chipmunk trapped inside the camera body throwing its weight against the side in an impassioned attempt to escape. Sometimes I'll get a camera to review and I'll think, "Why did they bother to make yet another one of these?" and I'll box it up and send it back.

There are some cameras I desperately wanted to love. The Leaf Aptus 7i comes immediately to mind. The folks at Leaf sent it along with a normal (80mm) lens and an $8,000 Schneider 180mm 2.8 lens that was so beautiful I almost cried. But the camera had it's share of failings. The battery life was almost non-existent, the AF might as well have been non-existent and the camera was ultra-kludgy to carry around and operate. When I sent it back I breathed a sigh of relief but I still have pangs of regret when I look at the several stunning files I was able to make with the system. When the stars lined up that medium format camera could be be breathtaking.

And that brings me to the Samsung NX 300. When my friend at the PR agency asked me if I wanted to test the camera I was hesitant. I thought that it was basically a copy of the Sony Nex 6 but without the grace note of an EVF. But, of course, I was wrong.

When I unboxed the camera and started playing with it I was impressed at how easy it was to learn. I intended to take it out from time to time and shoot it out of a vague sense of blogger duty but I was pretty sure I'd still spend most of my time with a Sony firmly in hand. But I was wrong. Once I took off my "water wings" (my need for an EVF at all times) and started (metaphorically) to swim along with the camera's current I found it to be an addicting little camera. Now, a week and half onward I am taking it everywhere. It's sitting on my desk waiting for my afternoon walk. It will be in the camera bag (alongside the Sony a99) for a shoot tomorrow at one of my favorite, boutique ad agencies here in town.

And I'm questioning why.

But it's really all the little stuff that I find I like. It's almost like a human designed the interface instead of a Cylon engineer hell bent on torturing earthlings. I like the deco/disco rounded amoeba shaped hand grip on the right side and I'm now fond of the files. But mostly I'm impressed by the performance of the sensor and metering. Someone just a day or two ago mentioned that the files looked a little flat from the NX300 and I thought that was quite a compliment for a consumer oriented camera. I can easily add as much contrast and saturation as I want during post production but it's hard as hell to scrape that stuff off a file when you camera starts out too over the top.

I read all kinds of crap from people who equate the big bodied cameras of yesteryear with "professional" photography. They dismiss really great image making machines like the OMD, the Fuji EX1, the whole Sony Nex line (but especially the Nex 7) as amateur "tools" just because they don't conform to the design aesthetics that had their genesis in the film days. It's also amazing to me that most people seem to think that a camera has to excel in the capture of fast moving sports to even be considered for professional work. Yes, that's about 1% of the professional market and wildly, in the minds of hobbyists, it comprises the entire big tent of paid photography.

It's all so much BS.  For decades the image makers I admired most worked with single sheet view cameras that shot at one frame per minute and focused, at times, in a couple of minutes (with some hard work and eye strain). Of course I am talking about the 4x5 and 8x10 cameras of ultra high dollar professionals like Richard Avedon and Irving Penn. And all my favorite fashion photographers who came after them were cranking film through their Hasselblads at the rate of maybe one frame per second and with slow going focus. The idea that we can't realize our unique visions with the whole continuum of mirrorless digital cameras (or even good point and shoot cameras) is patently ridiculous.

So, what have I posted below? These are images of Colin and his associate making psychedelic patterns on an overhead projector so they can record them on high res video for a stage production at the theater. I posted them because I was pretty amazed at how the NX handled the bright faces in the middle of blackness (metering) and the skin tones on a scene lit by only an overhead projector (color balance).

Additional plus points are: low noise at 1600 ISO and pretty darn good image stabilization.  Does this mean I am now in love with yet another camera system? Whoa, slow down there, dude. I like it. It's really good. But it's one member of a rich community of new cameras that seem to deliver great results in spite of not following camera design dogma. My respect is for the whole category of mirrorless, EVF enhanced cameras. So there. 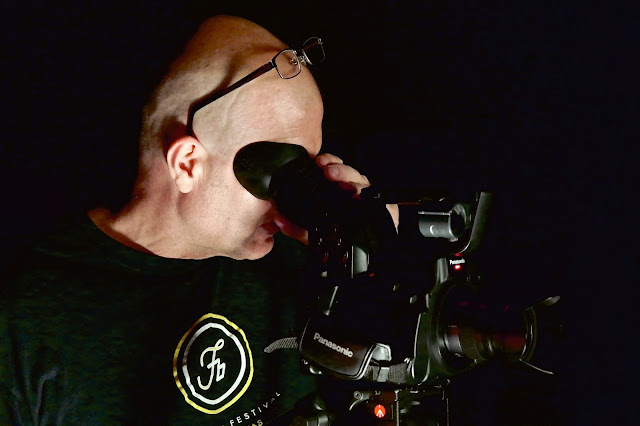 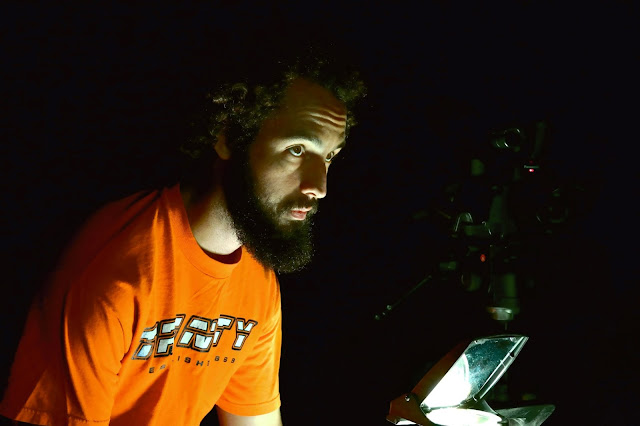 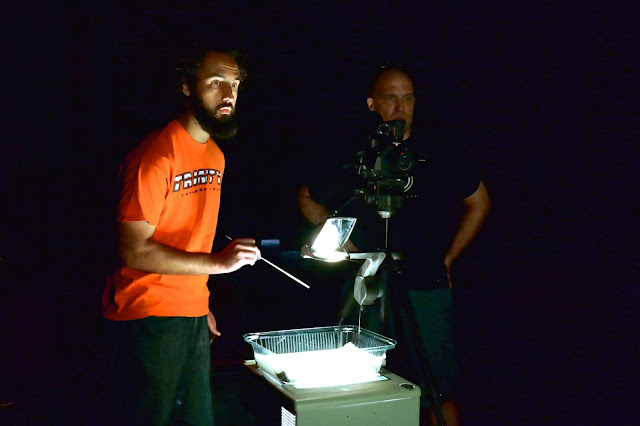 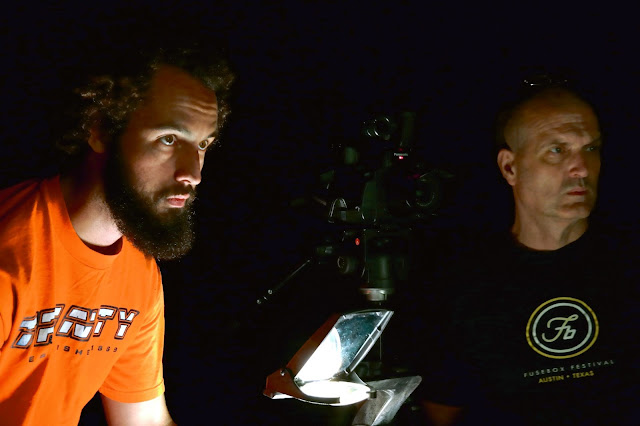 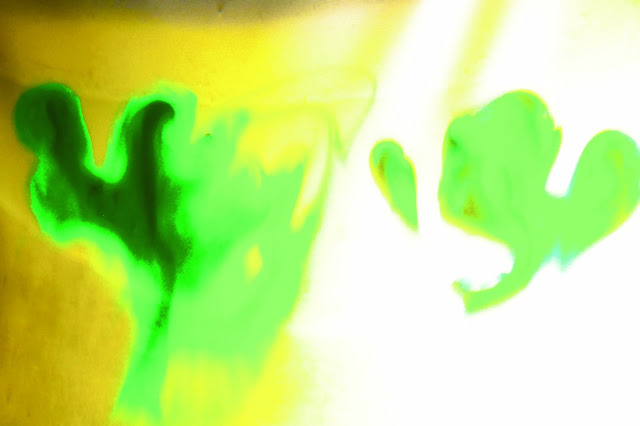 Posted by Kirk, Photographer/Writer at 23:15 14 comments: