Shooting video today. And mixing in some stills. 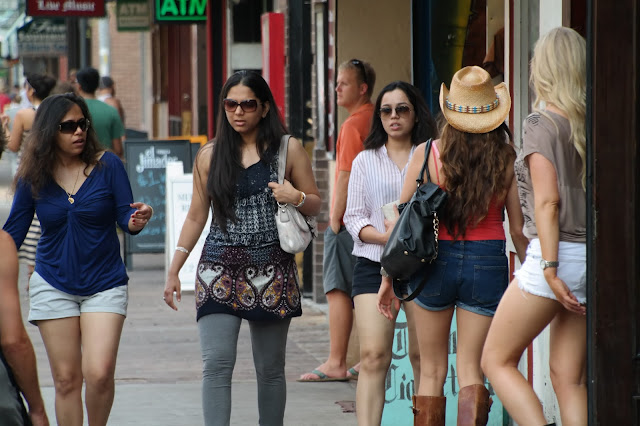 The image above has nothing to do with the content of this blog. I just stumbled across it, like the movement in it, and the gestures.

The professional reality of intermixing still photography and video production as interchangeable parts of my business (and the businesses of most other commercial image makers) is really starting to sink in. I've been looking over the projects my business has done in the last few months and I was surprised to see that the balance is trending toward video over stills.

I think there are a number of reasons for this. One is research that seems to show people are three times more likely to spend time on a site that features video over stills. The second thing is that most web oriented photography is getting simpler in specification and easier to do. While it seems sad that the smartphones are kicking ass they are just another tool and a large number of marketers and practitioners have made the assessment that the image quality has hit the point that it's fun and easy to do some marketing stuff with a camera phone. The next reason is that while uploading an Instagram'd photo is quick and easy, almost mindlessly easy, creating a good video program still requires some skills, some gear, and a lot of editing after the shooting. It's not like chomping down on a candy bar, good video (watchable video?) is more like having to assemble, mix, melt, cook and package the candy bar parts before you can eat it. Or serve it to someone else.

I was hired back in July to do a few still shots for a financial company with chic offices in a central downtown bank building. Offices? How about three floors? While we talked about their imaging needs they mentioned that they'd also like to see some numbers for a few little video interviews which ultimately turned into two days of video interviews and two days of editing. The still remained constant at half a day. Would I like to have just the one half day or would I be happier with a total of four and a half days of billing? Oh...I think I'll take the four and a half days...

A couple weeks ago I did a phone meeting with a medical practice (114 doctors here in central Texas) and they wanted a multi-media campaign, print ads featuring embedded photos which, when scanned would take the viewer online to full motion video expansions of the original marketing message. We'd shoot stills and then shoot interviews. The stills could be done in no time at all but the videos required direction, lighting design, sound design, editing consultations, and a bit of scripting. We spend fifteen or twenty minutes shooting the still shots (full length portraits on white) before spending an hour or so on each interview. Would I like to just do the stills and let some other company handle the video? No. I'd like to keep the billing and the bulk of the project in house. I did hire an editor for this adventure but that's a benefit. It means I can shoot more projects instead of dividing my time up sitting in the dark.

The interviews are not great cinema but they are good marketing content and I try my very best to make them as good as they can be. I light them to leverage the strengths and weaknesses of video capture. I use good microphone techniques and carefully monitor sound. I help clients craft the right questions; questions that lead to good answers. The level of involvement with the marketing departments is much higher and that tightens my integration with their teams.

If I were a purist, eschewing video as "different" and not my "cup of tea" I fear that I'd find my income and my involvement in advertising projects shrinking by the month. Some people say that the disciplines are so different that it's hard to cross over. I don't buy that for a second. Yes, you have to tell a story instead of illustrating one point. Yes, it's really great if stuff moves and is visually interesting and of course we've never had to consider sound in our regular work before. But the resources to learn each part are there and are logical and well documented. The hardest part for me is crafting a story and then translating it into scenes that make sense when cut together. The easiest part is the lighting and sound craft. But it's a constant learning process.

Pandora's box is open and the video pixies have been released into the air. There's no way they are going back into the box. And with professional photography largely being democratized out of existence do we really have the option of turning our collective photographic backs on a new business avenue that can help stabilize our incomes and keep us relevant to clients? I don't think I can.

I'm taking it one step further by being on three sides of the camera. I'm shooting projects. I am working on the opposite side of the camera as talent in on-line classes and, on the third side I am writing and scripting for other projects. That adds three income streams to a career in the visual arts that used to have only one real income stream.

Just thinking about that today during the crew's lunch break.

Posted by Kirk, Photographer/Writer at 12:32 5 comments: