Today's adventure was all about using a Nikon D810 to complete a video assignment. 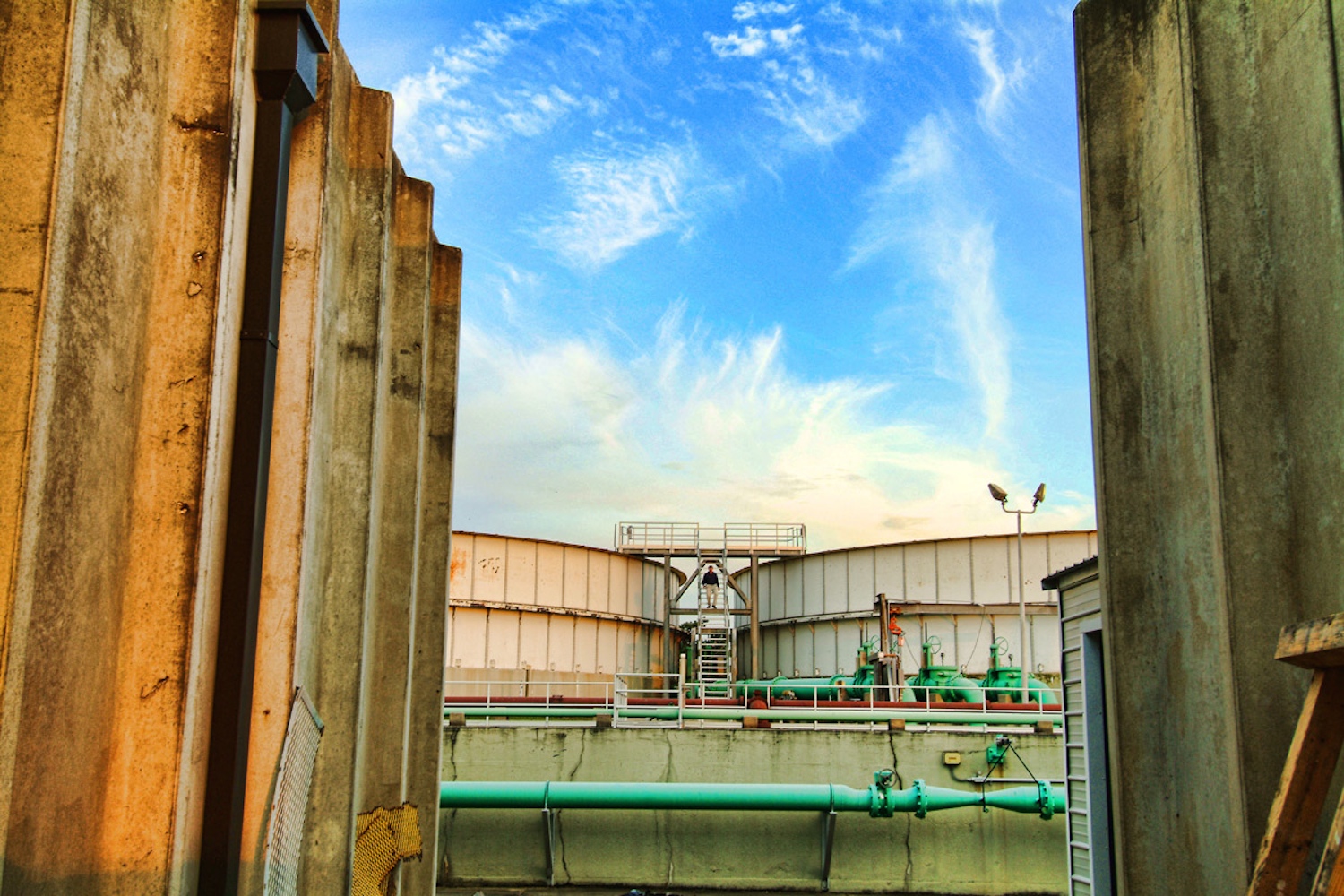 This photograph has nothing to do with today's topic. It was taken a number of years ago with a  Fuji S5 camera at a waste water treatment plant in Biloxi, Mississippi. It was late in the day and I had one of the first Nikon 12-24mm lenses on the front of the camera. Later on we did some night shots that I loved. Of wastewater holding tanks. Go figure.

Today's project was a public relations assignment. Zach Theatre is doing a play about President Lyndon Baines Johnson. They've cast a great New York stage and movie actor to play the part of LBJ. My job was to accompany the actor, the theater's artistic director and the public relations manager to the LBJ Museum and Library and to videotape conversations between the actor and the museum's curator as they plumbed the depths and reality of the former president's personality and mannerisms.

The actor and artistic director would also be interviewed in the replica of the Oval Office and if there was time (there was) we'd brave the delicate mist that was falling and do a second set of semi-scripted monologs outside with the museum building in the background. Finally, I would need to follow them around the museum while they explored so I would have good B-roll footage to use, where needed, in the edit process.

I'll be doing the same sort of video shooting in Johnson City on Friday and on Saturday we'll do a series of videos with the actor along with several LBJ contemporaries and experts.

The museum was open to the public today so we needed to work around the visitors. This also limited me from using any electrical cords. But these were things I anticipated. I wanted to do all of my video work with the Nikon D810. I've tested it and even when writing to the internal memory card the files are very good and very compact. I knew we'd be moving all the time so I wanted to use a zoom. While I wish I had a 24-120mm f4, truthfully, the 24-85mm f3.5-4.5 worked just fine.

I packed a set of AKG headphones, one Rode NTG2 shotgun microphone, one Rode Stereo VideoMic, extra microphone batteries and extra attachment cables for both. I used a Benro fluid head on a Manfrotto Cine tripod. I brought along a Gitzo mic boom (which I didn't use) as well as a light stand and a boom holder.

I ended up doing a fair amount of handheld work. I used a big loupe on the back of the camera so I could see the rear screen clearly. I put the NTG-2 in the hotshoe for most of the long morning and worked in as close as I could with as wide an angle lens as I could. The sound through the phones was good and I was impressed by the automatic level setting in the audio. It was very nice and didn't have perceptible "pumping" or rising hiss floor.

I did bring along a Fotodiox 312 AS LED panel with me and we used it, in some fashion, for every single interview. We even helped a colleague from Time Warner get some light on our subject so her video would be more successful.

So, here's the basic process: Find a good spot to shoot in and figure out the composition. How wide could I go? How far in could I zoom? Would the location and my position be right for the audio?

Once I found my spot I would bring in my interviewees and finalize my composition. Then, with the camera in live view, I would zoom in and use the magnification to ensure accurate focus. I would zoom back out to start shooting. I kept the camera settings pretty much the same but with one "wild card" setting.

The camera was set to 1080p, 30 fps, highest quality, 1/60th of second shutter, aperture locked at f4.5. The only two things that were allowed to change were the ISO and the white balance.

Once everything was in place I'd bring up a histogram and fine tune the exposure by changing the ISO. I tried to stay around 400-800 but had no compunction at all about running all the way up to 3200. I let the auto ISO do its work in the interiors but when we went outside I realized that the camera's white balance was too accurate and the colors were blue and drab. Once outside I went into the WB menu and selected either cloudy or open shade and the images looked so much richer.

We worked and shot from 11:00 to 2:00 pm and then I headed back to the studio to spot check the work. The D810 gets you a beautiful video file almost automatically. Even f4.5 is wide enough of an aperture to drop backgrounds out of focus when you are zoomed out past 50mm.

We'll be moving quickly on the next two shooting days so I'm going through my packing to better decide what worked well and what just took up space.

The ever increasing amount of video work seems to be a trend. I'm also booked (by another photographer) to shoot the video component of an architectural job on Monday of next week. Seems his clients are moving somethings to video and the photographer ( a good friend) is anxious to create a team structure in which he can confidently offer both services on the same day. It helps that we see eye to eye on almost everything visual...

Note to the folks who are using Nikon cameras to move into video: They have very good color science but live view is a prodigious battery suck. It makes sense to allocated one battery per hour of shooting, on average.

The kit zoom is just fine for video and the VR (everyone else's I.S.) works pretty well to make a coffee addict's hands into almost surgical instruments!

I look forward to doing this work over and over again---especially since someone else will be editing.

I am back from my week of helping out with my family and I'm happy to report stability. When you crest 85 years old you aren't looking for massive improvements as much as you are hoping to maintain. Thanks for all the kind messages from my remarkably nice and well experienced friends here on VSL. It's feeling like home to me.
Posted by Kirk, Photographer/Writer at 15:56 4 comments: