Nothing Beats a Road Trip. 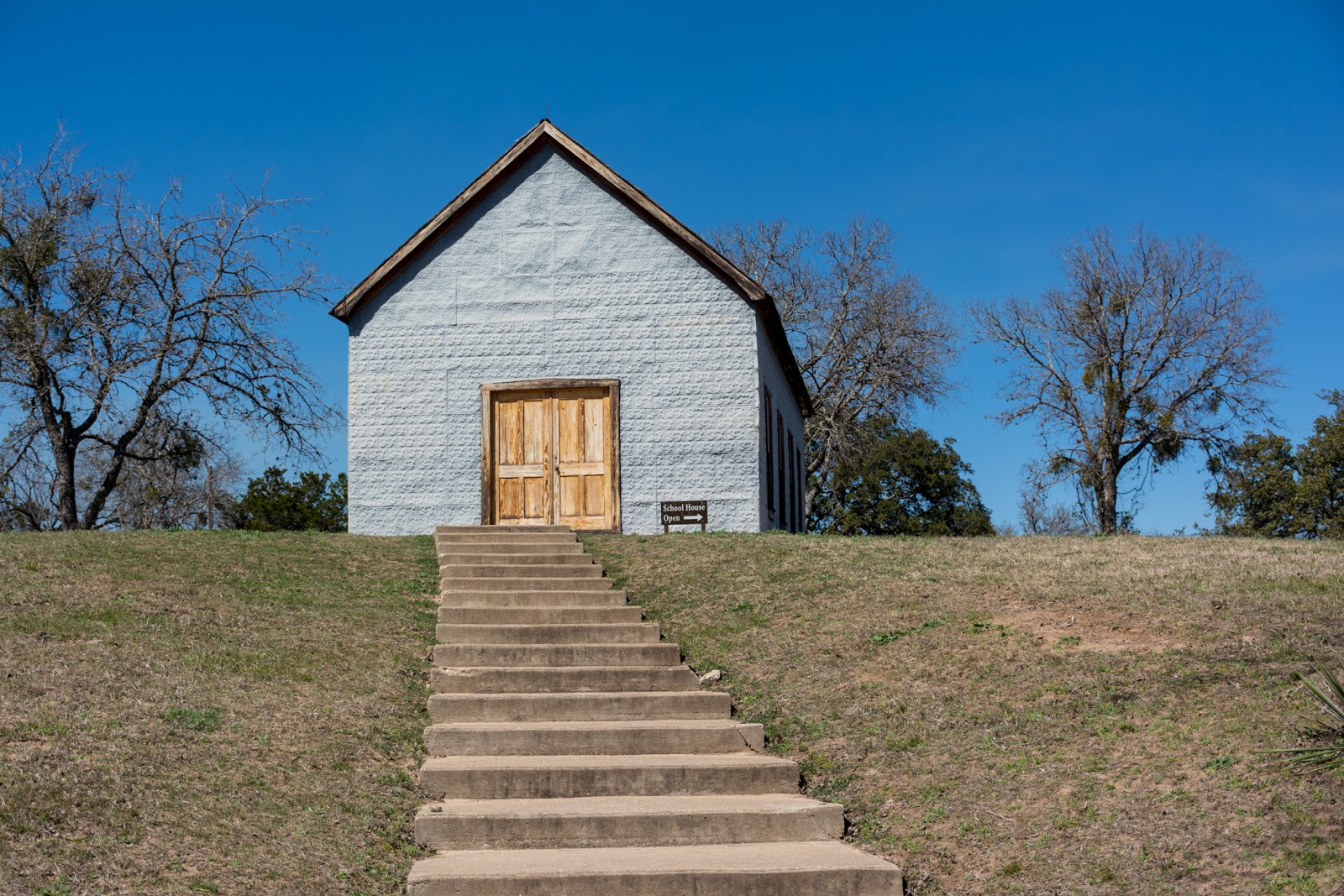 school house on the Johnson Ranch

We saddled up mid-morning, all caffeinated and happy, and headed due west on a road trip to Johnson City and beyond. It was a cold, crisp Friday morning last week. Well, cold by central Texas Standards. The temperature where gloves aren't exactly necessary but sure feel nice.

In the car were the photographer/video guy, the dramaturg/researcher and the public relations person from Zach Theatre. Coming along behind us in a pick-up truck was the theater's artistic director and our actor. Our mission was to research LBJ in order to make the upcoming play more insightful and faithful to the real personality of our former president.

I was juggling two jobs, something working journalists seem to have been pushed into in recent years. Over one shoulder I had a Nikon D810 all rigged up for shooting video, with a microphone in the hotshoe and a giant loupe clamped to the rear LCD screen. There was an extra battery in my left pocket and the 64 gigabyte card in slot #1 gave me confidence that I'd be able to shoot for hours.

My relationship with microphones is dicey. I understand them, have had success in the studio and on controlled locations with them but there's something about "run and gun" work in quick changing environments that always leaves me feeling that I've got the wrong tool on at the wrong time on the wrong camera. I started with a small shotgun mic but it sounded to noisy and I didn't have a dead cat wind sock for it so I tossed it back into the bag and grabbed a Rode NTG2. I had the "dead cat" but if I'm anywhere beyond about two feet from someone speaking I can never get enough gain out of that microphone. I ended up sticking an older Rode StereoMic on the hotshoe and it seemed like the best compromise of the three. I would have used wireless lavalieres but the cast of characters ebbed and flowed and grew and I only have two microphones. I'd no sooner mic one person than they would probably walk off while someone brand new would come into the group and toss out that perfect quote... Damn. Sound out in the wilderness can be challenging.

Over the other shoulder I had a Nikon D7100 with an all purpose zoom on it. When I got too frustrated with audio chaos I would let the D810 drop over my shoulder, grab the 7100 and do what I know how to do best---just take photos. Just as I have a love/hate relationship with most microphones I also have a love/hate relationship with Nikon's 18-140mm everything kit lens. On the plus side the range is great, the center sharpness is more than adequate and the VR works like a champ. On the down side the corners are softer than Brie cheese and the in camera distortion correction uses too much of the edge of the frames to do its work. That 18mm quickly becomes more like a 22 or 23mm instead. But the combination of good reach, adequate sharpness and killer stabilization keeps me using it for stuff that happens without a script or a plan. 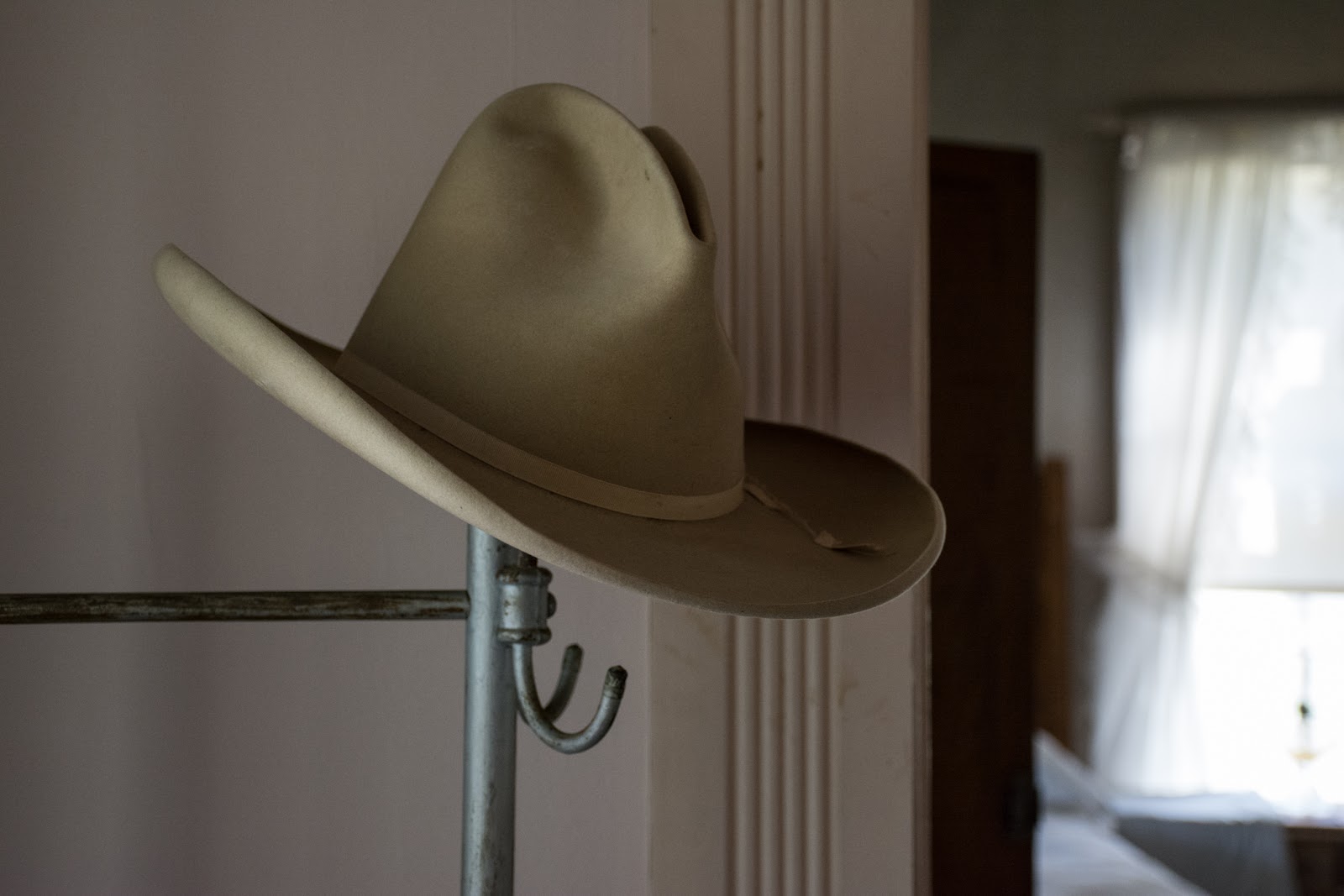 When we're doing jobs for clients I like using the raw files on the D7100 but I use them on this camera like a modern version of a Jpeg. By that I mean that I've got the camera set to shoot 12 bit raws which are also compressed. And since the menu gives me a choice between lossless compression and compression I'm going to assume that the compressed file is on the edge of being visibly less able than the other option. But this compromise buys me two things: I get to cram about a third more images on a memory card, and, I still get to dial in color temperature, sharpening and the like after the fact in post processing without destroying file info.

One of the fringe benefits of a group trip like this is someone else driving. I got to sit in the front passenger seat and stare out the window like a puppy. And if it was boring outside I could close my eyes behind my hipster sunglasses and no one would know I wasn't paying attention or being earnest.

The trip from Austin takes about 45 minutes (assuming you don't want to go at rush hour...) and it takes one through some really pretty Hill Country. You go past the turn off for Pedernales State Park and there are at least two Dairy Queen restaurants between here and there. Johnson City is very small. They are maybe 1800 people who live there but the population might swell to 2,000 during the weekdays as people come in from all around to work at the Pedernales Electrical Cooperative and at the restaurants. Very different from the million + people who live in the Austin area (11th most populous city in the U.S.) and the twenty million who seem to be trying to drive here most weekdays...

Anyway, the job was fun. I just followed people around and tried to catch interesting conversations about LBJ and if that didn't work I tried to make pretty pictures. One thing I came to realize is how poorly configured DSLRs are for long bouts of handheld video taping and how unprepared I was to hold a camera of that bulk still and vibrationless for more than a few minutes at a time. I came to love my tripod and hate the times when I had to handhold the rig---example: shooting in a moving car!

While the three point hold with the Loupe as the third point goes a long way to stability I'll never understand how anyone anywhere can hold a camera of that weight and size out at arm's length to view the naked screen and have any expectation of stability. I know I could never do it, no matter how much I might practice.

After grappling with the D810 for a while I realized that one of the features and flaws of shooting video with a big-ass, full frame camera is that one had a very limited depth of field. Great for those narrow depth of field shot of the half naked beauty rising from a nap on a gloriously lit set but sheer hell when trying to keep multiple people in reasonable focus without always having to shoot wide.

At a certain point I gave up the much better video image quality of the D810 and switched over to shooting video with the D7100 I'd brought along for still shooting. The smaller frame, using the same aperture on the 18-140mm got me a happier number of in focus shots. One of the unsung benefits of using the M4:3 cameras as video cameras, at least in these kinds of situations, is the forgiving nature of more ample depth of field for the same angles of view. All in all this kind of work would either drive me back to using the GH4 or EM5-2 all the time or maybe even buying a dedicated video camera with a nicer form factor. There's a time and a place for shallow depth of field and equally there is a time and a place for deep focus. It's so much fun learning and re-learning on the job. 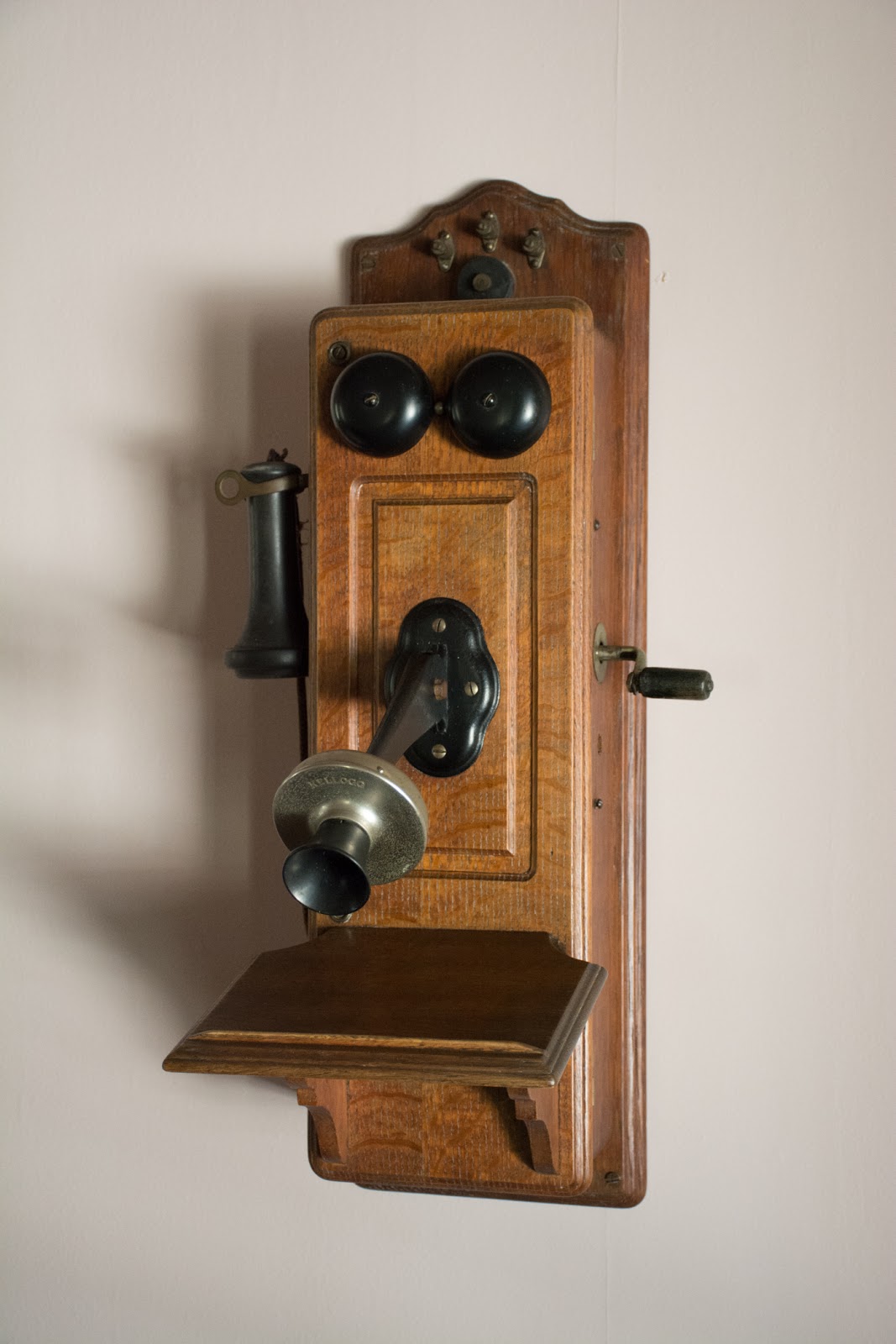 I was happy to shoot video and photos but happier still to be part of a small, road trip community. We stopped at an isolated McDonald's for coffee. We zoomed around LBJ's ranch in a Lincoln. We heard amazing stories and we say some beautiful ranch country. And then, best of all, someone else did the driving back home. As I dragged my gear back to the car I thought about my usual litmus test for projects and their fun quotient: would I want to do it again? The answer for Friday would be: Yes. 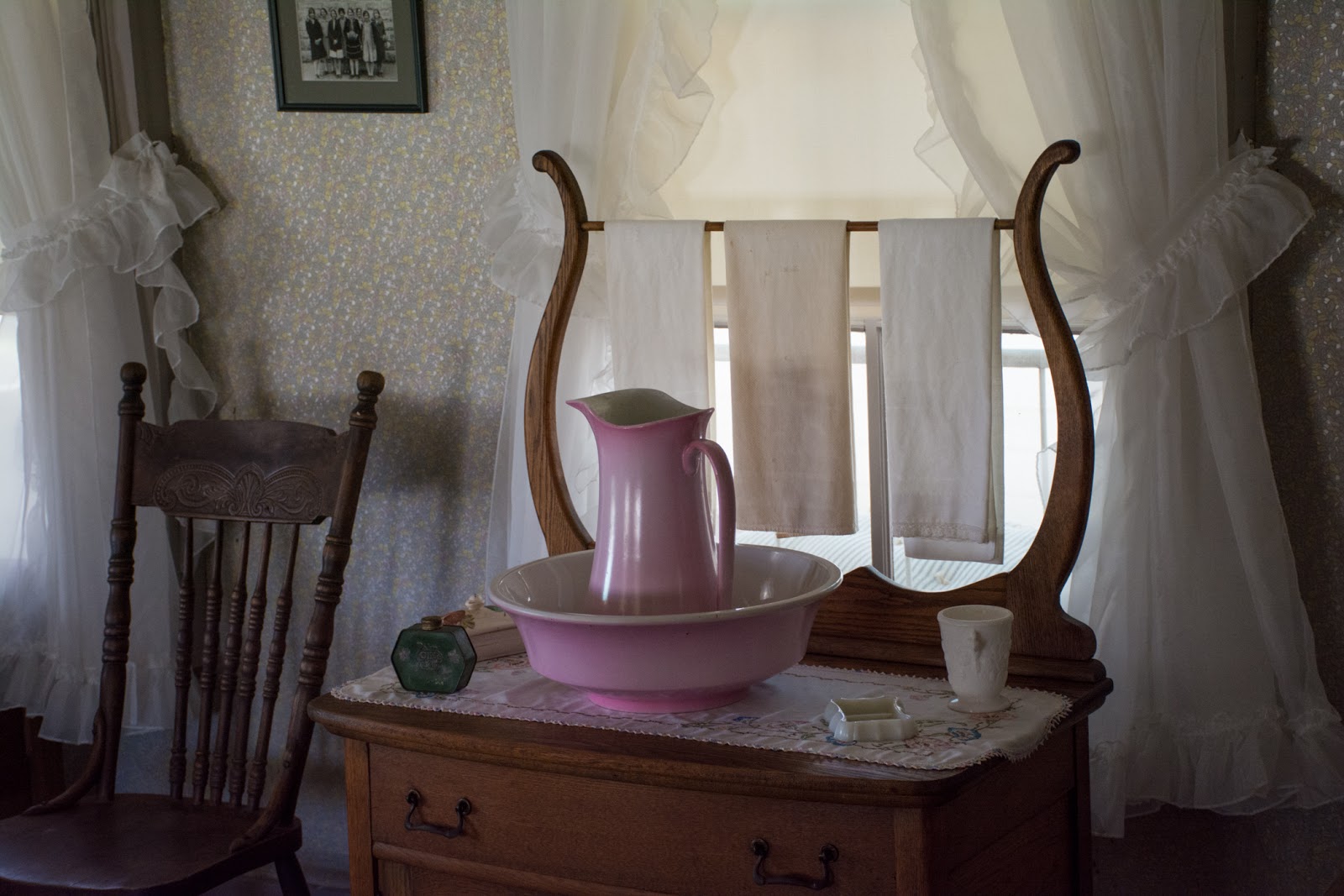 If you come to Austin for SXSW and you are disappointed
at the highly diluted nature of the festival and the
massive crowds of similar people you might want to
rent a car and head out to Johnson City.
It may be a good cure of overweaning hipsterism.

A quick advertising note: Craftsy is offering a bunch of course at up to 50% off. It's a good way to learn new stuff. You might want to browse their photo offerings. I'll be looking at the cooking classes.....   Here's the link!

Posted by Kirk, Photographer/Writer at 16:12 4 comments: