I had such a good experience using the new "cage" on the Sony a6300 I ordered one for the A7Rii. 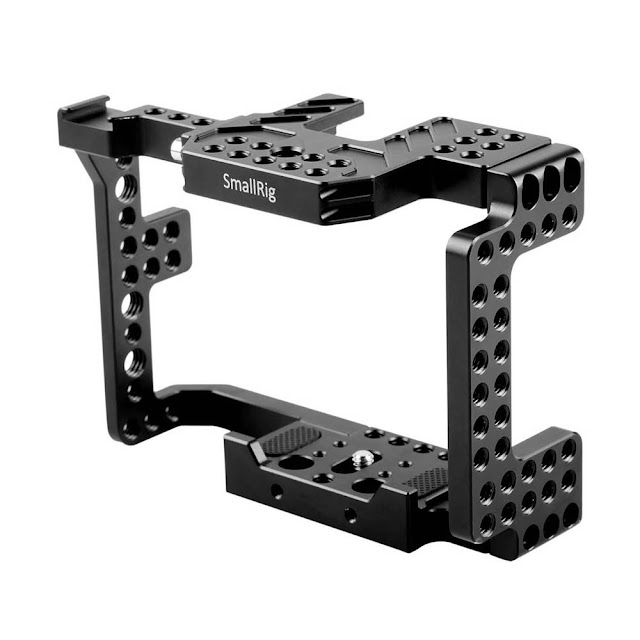 SmallRig "Cage" for the Sony A7Rii.

I recently wrote about ordering a "cage" for the Sony a6300 camera. It's kind of a video thing. The cheese plate surfaces allow you to add shoes for things like microphones and attachment points for things like digital audio recorders and external monitors. The one I bought for the a6300 was very well made and sturdy. The way the rig is designed it holds the camera in place firmly. I can still access the battery and the memory card.

But there was a bonus that works well for me as a still photographer as well. By anchoring the camera firmly in place, and then giving me lost of quarter inch female sockets everywhere, I am now able to use the small camera with heavy lenses in the vertical orientation on my tripod. In the past a heavy lens would pull its nose down and I was loath to over tighten the tripod screw for fear of damaging the camera. Now, with the lens on the camera, I can orient the rig to make the camera vertical and the stops on the rig hold the camera and lens in place. No more droop. Sounds like a small thing but it means a lot to me in terms of working vertically with bigger lenses.

Once I figured this out it just made sense to do the same thing for my bigger, A7Rii and A7ii cameras. I ordered a rig/cage made specifically for those two cameras and it came (as promised) today. Now I have a place to attach a microphone that doesn't let the microphone poke me in the forehead as I use the EVF.
It more or less completes the "run and gun" configuration for those A7xx cameras when using them as video snapshot cameras.  There is one built in shoe on the right side of the rig as I hold it but I will be adding another shoe to the left side of the rig to hold a small XLR mixer box.

I like the way the rig bulks up the camera for better handholding as well. Nice when video gear also enhances still photography handling. We'll see how it goes but I'm already thinking of researching to see if they have one designed for the RX10 ii. ...