A Very Short Blog Post About the Panasonic fz 2500 Versus the Sony RX10iii. No real conclusions yet.

Just horsing around in the studio....from the 2009 archives. Yes, that's the Leaf A7i we were sporting around. Ah, medium format digital. The 2017 redux is at hand.

Once again I have to blame Frank for my current waffling. He asked me to join him for coffee and then showed up with the new Panasonic fz 2500 in his hot little hands. He knows I have a couple of big video projects coming up and I just know he loves to muddy the waters of my decision making by tossing in new options to my already mixed up mix of thoughts about the next acquisitions in video gear.

We got our coffees and we sat down to catch up. He handed me the camera to play with and I have to say that if I was not already deeply entrenched in the Sony camp I would have curtailed our coffee meeting and gotten in the car to rush to Precision Camera and pick up an fz 2500 right way. #impetuous.

The first thing in favor of the Panasonic is the viewfinder. Sony and Panasonic are both using the same resolution in the EVFs but Panasonic increased the magnification and eye point and the finder is easier to look at, seems sharper and cleaner. Point to Panasonic. The Panasonic also has more video file format options, including an "All Intra" 200 mbs 1080p setting that should really make editing a pleasure. While we're on the subject of output that camera also allows one to output a 10 bit 4:2:2 signal from the (micro) HDMI port and that's one of those "holy grail" specs that technically adept video fans are always trotting out as highly preferable.

I also have a sneaking suspicion that the DFD focusing in the new Panasonic brings a faster and surer focus to the table. The topper in favor of the fz 2500 is probably the three position, built-in, neutral density filter system. Nice......

During our coffee, I kept picking up the camera and checking "just one more thing" in the menu. I'm pretty familiar with the Panasonic menus having owned the GH4, GH3, fz 1000 and several other Panasonic cameras. I could only stare in wonder at the reality that they have separate still and video tabs in the main menu. That would also be so nice (hello Sony?).

A couple of things stayed my hand and preserved my credit rating (at least temporarily). One is that when shooting in 4K (which we do more and more; even when editing in 1080p) the Panasonic makes a big crop into the frame. It grabs the pixels it needs one-to-one instead of downsampling the whole sensor. Might make for a better image but you lose a bunch of wide angle capability and recent shoots have shown me that a wider angle is always useful.

Secondly, the preliminary reviews point to evidence that the lens on the front of the Sony RX10 iii is superior and its superiority can be seen in the camera's output.

The jury is still out for me.  Frank has offered to loan the new camera to me so I can spend a couple of days shooting it with both an eye to a review and a nod to (almost inevitable) acquisition. It'll have to wait till after Christmas but I think it'll be fun to put the two cameras together and have them battle it out.

I have no complaints at all about the RX10 iii's image quality in either stills or video but I do wish it had the convenience of ND filters inside as well as some of the file format bells and whistles. On the other hand, I don't want to walk away from the painful investment I've made in mastering the Sony menus across the entire camera line, so there is that.

If I were in the market, with an empty camera bag and a full wallet of ready cash, I'd have to carefully weigh what I would want to use each camera for. If I were a video guy who wanted occasional still images I think I'd be all over the Panasonic. But there's more to life than video.....

Posted by Kirk, Photographer/Writer at 18:38 8 comments:

SmallRig in use on the Sony A7ii. 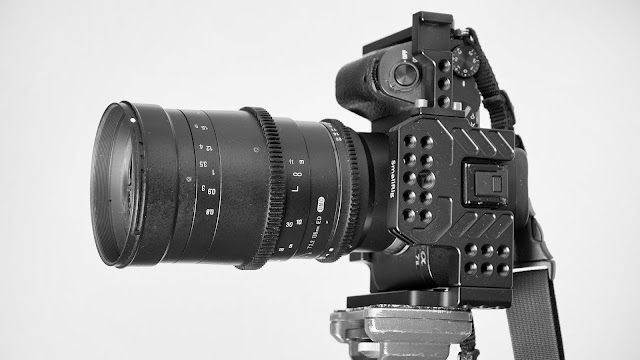 Lately, my "go to" camera for doing portrait work in the studio and on location has been the Sony A7 ii. It's the 24 megapixel model and if you look around you might be able to find a lightly used one for around $1,000. The High ISO Whiners would tell you that it's noisy above 3200 but I'd say that if you are really, really picky, and have no idea of how to use the noise reduction features in any of the major post processing programs, you might not even want to use it over 1600. When I put on strong, strong reading glasses and press my noise against my computer screen while diddling the magnification to 100% I can see the noise as clear as day....

But like the fool I am I bought one anyway. And even more foolishly I used it this year to create hundreds of portraits. Which clients happily paid me for. Go figure. I should probably hang my head in shame since none of my full frame cameras focuses faster than I can pull them out of the camera bag. I feel horrible anxiety when "real" pros saunter by with their Nikon D500s since I know I will be unable to photograph my clients (with studio flash) at 10+ frames per second. I hear how great the 153 AF points are but end up wondering why a camera that advanced doesn't have eye auto focus. My A7ii doesn't have it either but the A7rii and the a6300 both do; along with 400+ focusing points... But, once again, I digress.

I wanted to write about the SmallRig cage I bought for the A7ii and to show you what I meant about holding big lenses stable on tripods while shooting in the vertical orientation. The lens in question is the Rokinon 135mm t2.2 Cine lens. It's pretty front heavy. Sometimes, when I use it on a camera mounted directly to a tripod it droops. And droops can be embarrassing. Especially in the studio.

After I bought a cage for the a6300 and saw how well it stabilized the camera and transferred the stress of the tripod connection to its own structure I was anxious to try one with the A7ii. This cage fits very tightly and the feel of the construction is just like the cage for the a6300, very high quality.

The following are a few images from different angles.... 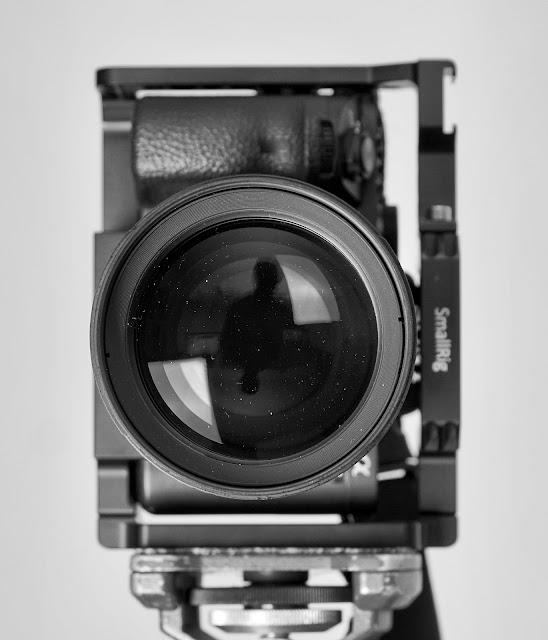 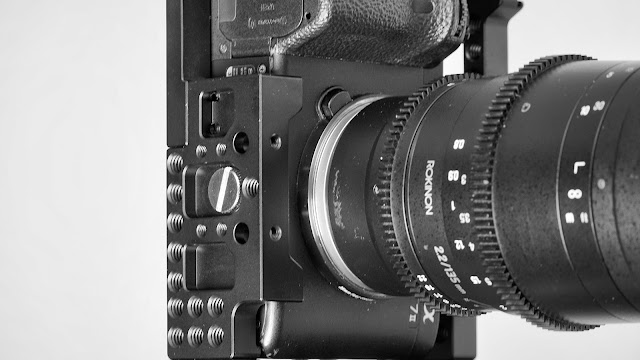 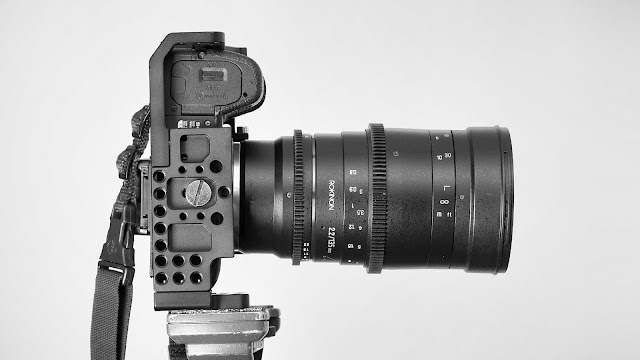 So, if you are one of those guys who always handholds cameras, doesn't own a tripod or only uses puny lenses, just ignore all of this and go on doing your craft in the way which you've become accustomed. We're not even grading on a curve here. But if you have a wimpy, little camera and a plump, oversized and front heavy lens you like to use you might consider some sort of "camera prosthesis" to handle tripod work.

While we are on the subject of cages... I did put a XLR mixer and a monitor on the cage on the A7Rii today to record a quick testimonial video for a financial services client. It was great having everything right at hand instead of clamped and cabled away. Can't wait to get the A7 cage set up optimally to be able to move with the camera and watch the image on a 7 inch monitor mounted just above the camera. Should make moving shots just a bit more fun.


Posted by Kirk, Photographer/Writer at 18:14 4 comments: