My second to the last purchase of the year? Just an upgrade of my Zoom Hn4 to the Zoom H5 digital audio recorder... 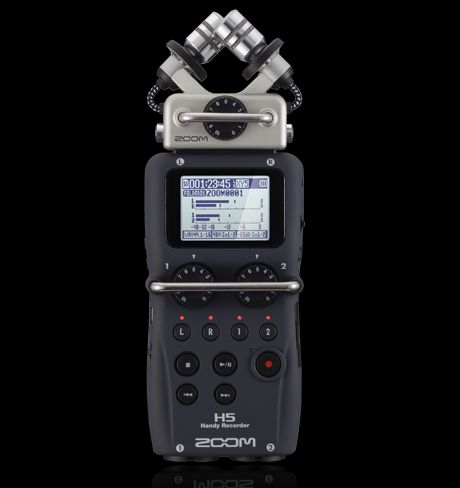 There are several devices that I employ when I'm using microphones with XLR connectors. If the microphones have good, robust levels and I just need a connection, and possibly a way to reduce their levels, I'll use the little Beachtek D2a box. It's passive so it doesn't require batteries and it works with most of the microphones that don't need phantom power, or more pre-amplification than my cameras can handle. Ah, the vast nest of details involved in producing nice video...

For microphones that need phantom power, or those that just need a boost in the pre-amplifier stage in order to match the camera for less noise, I have been using the Tascam DR-60ii. It's a nice unit and has a plethora of features but it has an ungainly form factor and it eats double "A" batteries like candy...

My first digital audio recorder was the venerable Zoom Hn4 but it had one fatal flaw (as far as I was concerned) the only output available to my cameras was set up as a line out with a much higher level than most cameras could deal with as an input. Since I like getting the final sound into the camera this was a pain in butt. There is a workaround which calls on using an "attenuating" cable between the Zoom Hn4 and the camera which reduces the juice heading to the camera so as not to overload the camera inputs, but.....it's another speciality cable to buy and of which to keep track. And cable tracking is not one of my strengths.

I was able to pick up the Zoom H5 to replace the Hn4 and I was pleased to find the output to camera was fully menu-adjustable. There are also several other bonus features: Longer battery life, physical level controls which are separate for each channel, and much "cleaner" pre-amplifiers.

After using it for a couple of days I find it's just right. I like the way the files sound, it plays well with my Sony cameras (which is good because my primary use of the external audio recorders is as a pre-amplifier and XLR interface, NOT as a recorder). The difference in battery life between the Tascam and the H5 is striking. I'm on my first set of two double "A" batteries with the Zoom and I've run it a lot. The Tascam runs for about 3 hours (tops) on a set of four regular alkaline double "A" batteries. Ouch. Zoom suggest that I'll get around 15 hours of service from two batteries on the H5.

The one real benefit of the Tascam, and why I'll keep it around, is that when it's mounted under a camera I can easily see the control panel and screen. I'm still figuring out workarounds for the Zoom.

In one of those "hit and miss" sales on Amazon.com I was able to buy one for $219. last week. I looked again the next day and they had gone right back to $269.

Another good use of the Zoom H5 is when using the AT Dynamic, side address, narration microphone I bought last Summer. It needs both phantom power and a nice, strong pre-amplifier. The Zoom checks both boxes.

If you aren't shooting video I'm not sure you need one of these. I guess it would be nice to have if you are a musician. I like them because they have a high "gadget-to-price" ratio and I rationalize that I might do some wonderful recording with it in the future.

We are zeroing in on the New Year; I hope everyone is well and has safe and fun plans for this evening. To my friends and readers in Europe....HAPPY NEW YEAR!!! 😁

Posted by Kirk, Photographer/Writer at 17:18 5 comments: