The internet is a dangerous place to look for specific information. I bought a Rode NTG-2 super-cardioid microphone three or four years ago and used it plugged directly into my camera's 3.5mm input with the help of a plug adapter. When I started using the microphone with my cameras I found the output of the microphone to be very low. I always needed to boost the audio level in the camera. When I did that I ended up with files that were pretty noisy.

Searching the web led me to believe that mediocre performance is just what you can expect with a $269 microphone. "Get over it. Spend a couple grand on a decent mic." Most sites that dealt with audio presumed that a smart person would get a pre-amplifier for the microphone and only then would it work well enough for professional use. Most people started using them in conjunction with external digital audio recorders, like the Tascams and Zooms, and getting much better audio so I figured the pre-amp was needed and, like a lemming, rushed to buy a Zoom (and a Tascam). And I've been using that microphone in that manner ever since. It's become a habit. A stupid habit. I hate "double sound."

About two years ago I wanted something that would interface between the cameras I use and the XLR connectors that are at the back of nearly every good microphone so I bought a passive unit for those times when I wanted to run a microphone through the box and also have the ability to pad down the levels.

I decided that since I didn't have good results with the Rode NTG-2 I should look at the reviews for a microphone which I could both afford and get decent sound from. All reviews led me to the Sennheiser MKE 600 and I bought one. But nowadays my habit is to run everything through the little Beachtek interface. I've learned that part of the magic of that little box is internal transformers which help provide the right impedance when combining balanced, XLR microphones with DSLR/Mirror-free 3.5mm microphone inputs. I set up the system with the MKE 600 and the Beachtek and recorded a bunch of voice tests. They sounded great and the levels into the camera were ideal. No maxing out the camera gain just to get a whisper of sound...

With this success in mind I also started using the Audio Technica micrphone the same way. Success! But, of course, I had already developed a fixed prejudice against the Rode NTG-2 so I never got around to testing it with the audio interface. Until today.

I decided to do a direct comparison between all three of my super-cardioid microphones in order to narrow down my choices for my upcoming video project. I presumed the Sennheiser and the Audio Technica would be the winners but tossed the NTG-2 into the ring just to see how badly it would suck.

Surprise! Of the three microphones in my test I preferred the overall sound of the NTG-2 to its rivals. This was the first time I'd used the Rode with the audio adapter/interface and it cleaned up everything that seemed wrong with that microphone. Hmm. Proper matching, could it be logical and correct?

Funny what you can learn by stepping away from your computer and just plugging all this silly stuff in and playing with it. I'll keep the Zoom H5 and the Tascam DR60ii around for those times when I might need some portable phantom power.... 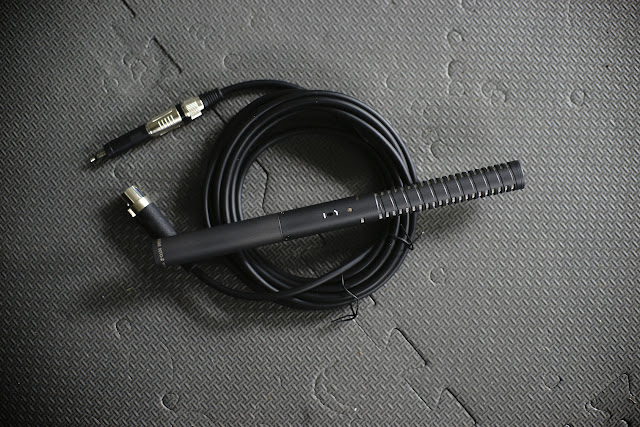 Posted by Kirk, Photographer/Writer at 19:34 6 comments: