A day spent defying logic and reason in the realm of professional photography. 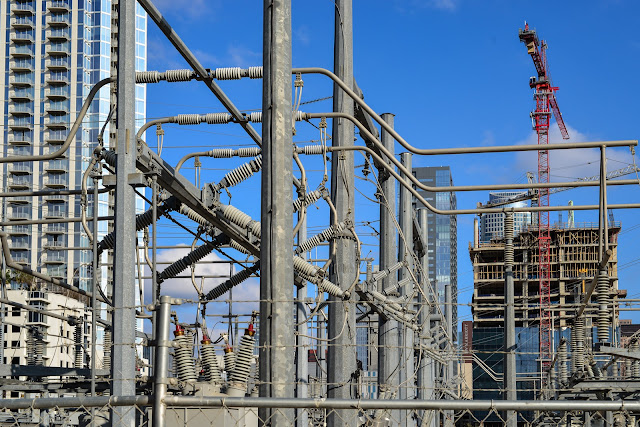 Want a full frame camera cheap?
I noticed that our local camera store is
full of used Nikon D600 and D610 cameras,
most for less than a thousand bucks.
This post is about a different camera.

I have a client that makes physical stuff. Not software or vaporware or social networking opportunities, but real stuff made from metal or plastic and sometimes both. They fabricate everything from sheet metal enclosures for data hubs to wiring harnesses for the auto industry. They even populate circuit boards using surface mount technology. And like just about every other business they need to advertise, and market, which sometimes means that they need photographs and videography. Like most companies of a certain size they aren't rushing to have an intern create their content with an iPhone; they actually hire people with experience to come to their locations and make images. Amazing, right?

I did work for them back in 2012 and 2013 but I hadn't heard from them since. I never conjecture about where a client has gotten off to because having run an ad agency I know that some clients think of creative tools as a five year investment and some are hoping the materials people create for them will last ten years. Some times client circle back and some times they disappear and you never see them again. It's just the nature of the business...

At any rate, this particular client has expanded, they now have facilities here in Austin as well as in India, Mexico and China. They figured that with all the new locations and all the new services they are offering it's high time their almost six year old website (and print collateral materials) got updated. The ad agency they used in 2013 is gone; out of business, as is the production company that did their first and only video. I'm the last guy standing. Pretty weird if you ask me, but the company got in touch and they'd like me to handle the content creation. If I were rational and logical I'd just cherry pick the stuff I like to do, and which has the most profit attached, and ignore the rest. There is an old saying amongst therapists; it goes like this: "Just because somebody throws you a ball doesn't mean you have to catch it." But I am a slow learner so I agreed to make a new set of photographs for their Austin and Mexico locations and to try to salvage a good video edit out of the materials they were able to rescue from the now non-existent production company. My first call was to my favorite editor. That's the easy part; getting the client to do things my way is, inevitably, the hard part.

The first leg of our new journey together was to photograph a day's worth of material at their Austin location. This included images of their new surface mount circuit board assembly resources, their wire harness production line and a bunch of similar subjects. Just for fun we took another run through their machine shop to document the continued existence of their CNC machines and some of their precision mechanical toys.

When I packed last night I had every intention of using the Nikon D800e to do all the heavy lifting today; I packed the D700 as a back up camera, just in case. But this morning when I opened the backpack with the camera gear I just had the most contrarian impulse to pick up the D700 instead and to spend the day shooting it. So that's exactly what I did.

This was a "throw back" Friday for my photography. Armed with a raft of lenses that I've used in previous iterations of my business, and a stout and solid tripod, I sallied forth to capture photons across the big pixels on the D700 sensor. Out of a selection of eight lenses I mostly leaned on some ancient favorites like the 20mm f2.8 AF-d, the 24mm f2.8 AF-d, the 28mm f2.8 Ais, the 85mm f1.8 AF-d and, for ultimate flexibility, the 24-120mm f4.0 VR lens.

When I got to the location I was very happy to learn that the nasty old florescent tubes that flickered their way through our previous shooting had all been uniformly replaced by very nice LED tubes. One custom white balance got me through the entire day and my own LEDs were perfect for discreet fill lighting. What a time saver it is to have an entire facility uniformly lit!

So, how did the ancient and battered D700 fare? I'm going to say it did really well. Most of the images were of people engaged in their jobs; anything from fabricating braided cables to quality checking circuit boards. In a job like this people aren't moving quickly and the light levels are high enough to keep the ISOs under 640 (for the most part). I worked almost entirely on a large tripod and took advantage of the mirror lock up coupled with a shutter delay setting. I tried to figure out and shoot at each lens's optimum aperture but I did use the 85mm at f2.0 a lot in order to blur backgrounds.

What did I find out when I came back to the studio and started post processing in the newest version of Lightroom? I learned (for the millionth time) that your ancient D700 can look as good as the newer cameras if you take time to: Set a good custom white balance. Watch your histogram. Nail your exposure. Use prime lenses. Use prime lenses at their best performing apertures. Put your camera on a dense and vibration free tripod. Use the mirror lock up. Use the shutter delay setting. Stay close to the lowest real ISO on the camera. Focus carefully. Add fill light when needed (also called: instant dynamic range).

I'm uploading 650+ images to Smugmug.com right now to share with my client. They all look great.

We'll be working on getting a concept nailed together for re-making their video and, in a couple of weeks, the CEO and I are heading to Mexico to shoot at their facility. I hate to make the dilettantes unhappy but I'll probably shoot that with the D700 as well. But not to worry, I'll take along the D800e as a back up.