The false, tongue-in-cheek reveal of my newest camera "system." 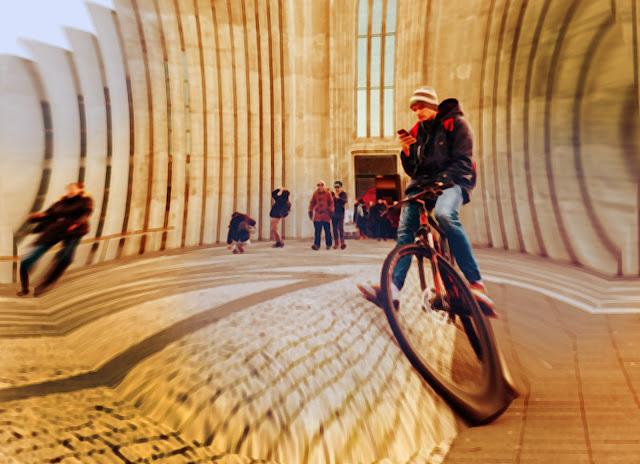 I promised to reveal my latest camera purchase tomorrow but I thought I'd write something more fun today. I mean, really, who cares what I bought myself for my birthday anyway? It's nothing rare and fascinating. Just another toy for a spoiled 63 year old....


So I was at this church parking lot and I went to back up my car. When you put the car in reverse the back up camera springs into action and a screen on the dashboard gives you a view of what's behind. I was fascinated by the in your face reality of the image I was seeing. A whole different way of seeing. If only I could capture this unique vision it would bring a whole new level of insouciance to my already tortured personal work.

I quickly drove home and pulled the Honda CR-V into the underground, thirty car, parking garage underneath the Visual Science Lab headquarters and started taking the car apart to see just how the camera and lenses that comprise the back up system were made. It seems pretty obvious that it's a video feed but as a still photographer I wanted to capture stills from from the feed. I grabbed a few Alien Ware gaming computers we had strewn about the shop floor and installed power supplies in the laptops that would work with 12 volts of DC electricity from the car's electrical system. I split the cable providing the video feed and ran it through a de-stabilize/re-stabilize archrinic filtering system in an attempt to improve the signal. It was getting better all the time. It was very, very Nyquist. And accutance-y. With profoundly muddled adjacency effects.

One fault of the camera is that it's a bit noisy and as you know I can suffer absolutely no noise in my images so I knew I needed to add light to anything I'd photograph with the system. To this end I put a serious roof rack with an inverse ceiling grid system to work and put several Broncolor flash systems on the roof of the car. I can trigger about 6,000 watt seconds of flash power with a big red button I wired directly onto the dash board. I decided the flashes were no good used directly so I opted for small softboxes on the six heads I intended to use. A quick test trip revealed that the wind generated at speeds in excess of 110 mph tore up the conventional softboxes in short order. To be honest they weren't doing very well even at 10 mph, so I had the VSL machine shop whip up six 30 by 30 inch stainless steel soft boxes with frosted 3/4 inch frosted Lexan for the fronts. You know, to diffuse light. With a bit of wind tunnel streamlining and some back and forth with the design team rev#13 gave us the aerodynamic profile I was looking for.

Once I'd color corrected and built a profile for the camera and rear facing lens we were ready to test. The routine is to find a scene that looks like a good candidate for the car camera and then turn the car around and back up toward the subject. This scared several mothers of cute young toddlers as we rocketed toward them in reverse, trying to get exactly the right angles and crops. The screeching of the tires and the sound of metal on metal from the brakes caused the small children to squeal in delight. Their mothers were less enthusiastic about our efforts to meld cars with photographic art. In the end we prevailed, the flashes worked and we pulled some stunning 600 by 400 pixel images out of the effort.

Now that file size might not sound like much but remember that we're deeply into the age of computational photography so running the resulting files through an Apple iPhone for a couple hours cleaned up the image nicely.

Now it looks something like this: This is the final output from hours of computational photography, machine learning and A.I. graphics restructuring. Unlike anything one could get from a conventional camera system..... 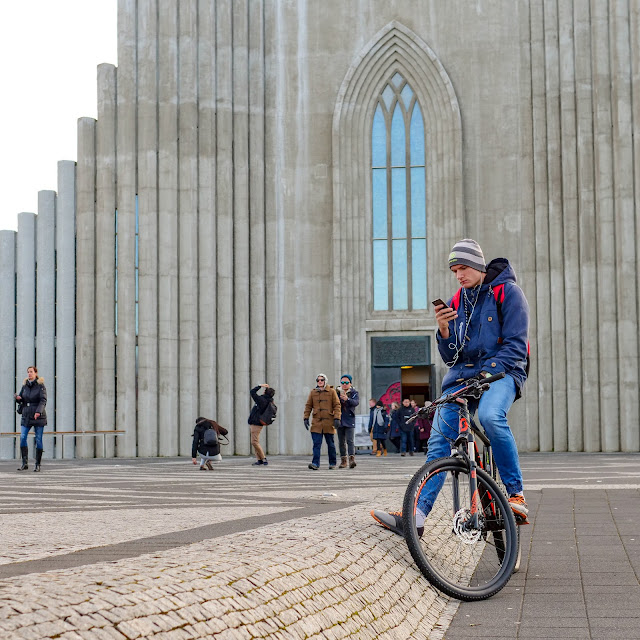 I think, if you squint and use your imagination, you'll agree that we're on to something here. I've been told that the back up cameras on the bigger Lexus SUV's have better bokeh so we're looking for volunteers who will let us rip the cameras and the imaging guts out of any 2018 Lexus SUV of which they are not especially fond. It's for art and research, who could resist?

Posted by Kirk, Photographer/Writer at 18:15 13 comments:

Some alternate looks at Iceland. In town and out of town. 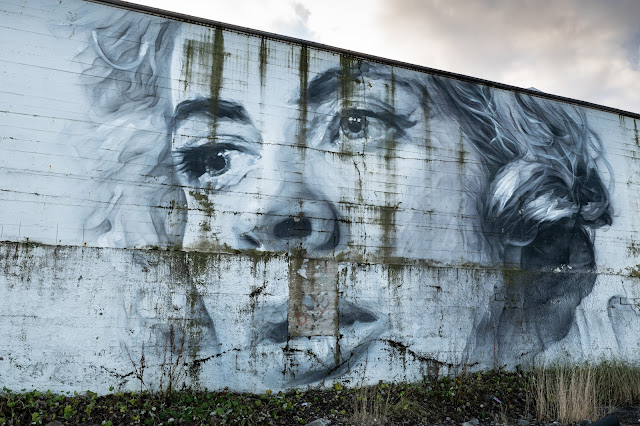 It seems that no matter where I end up I walk around and find public art/graffiti that I really love. This painting took up the whole side of a building and you can see that it wasn't a "spray and dash" initiative but a work that took time and no little measure of skill and good taste. I was amazed when I saw it as we drove by in the dark on our first morning, coming into town. I despaired of ever finding it. But one day I slapped on fresh boots, lots of warm clothes and a micro four thirds camera and went hunting. I must have a nose for it because I seemed to head straight to the part of town where this wall art lives. There was more. I'll show it later. This seemed just the sort of photography that actually calls for a wider view so I made use of the 15mm Leica/Panasonic lens and was happy to have brought it along. The weather is hard on outside art in Iceland. Just about the opposite kind of damage that the harsh sun inflicts on the Texas versions. 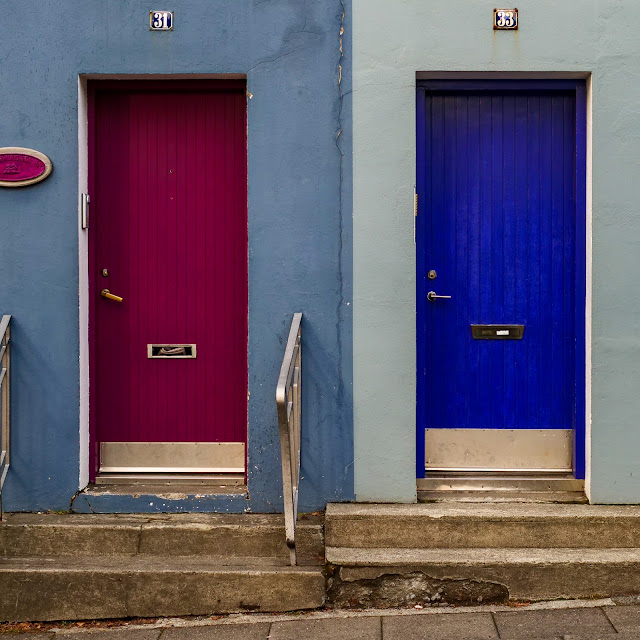 My fascination with doors and doorways began back in 1985, the first time Belin and I headed to San Miguel de Allende, Mexico. The doors there were more gothic and primitively finished and have been the subject of many photo essays over the years. I'm not familiar with a similar collection of door photographs from Iceland but these two door in a central neighborhood in Reykjavik just called out to be photographed. I tried to be very careful to get and keep my verticals straight up and down, and in the final image I may crop out the railing on the left of the frame. I used the square aspect ratio that the G9 provides, not because I am incapable of cropping, but because I wanted to make sure I got what I wanted the first time around. I guess it's some kind of wacky attempt at proto formalism. 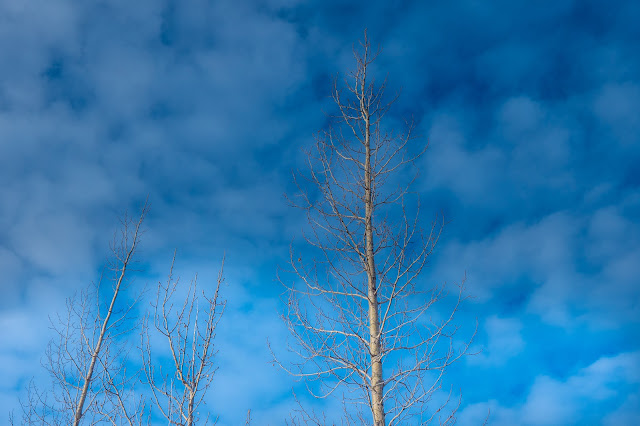 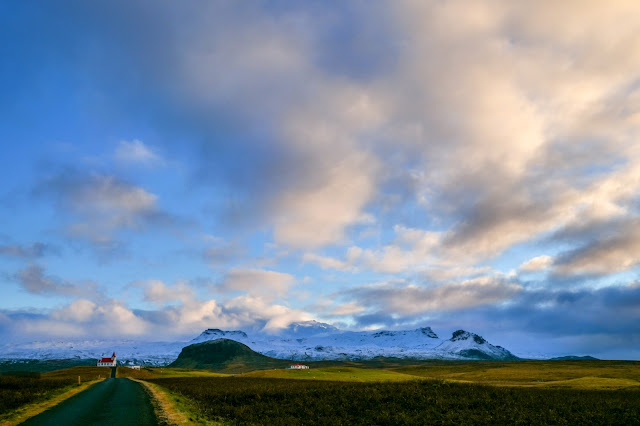 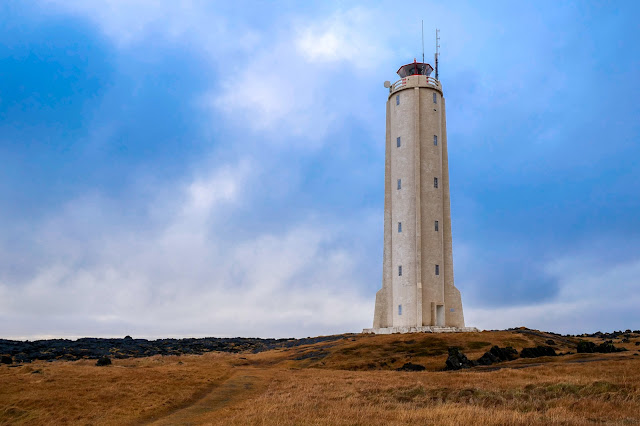 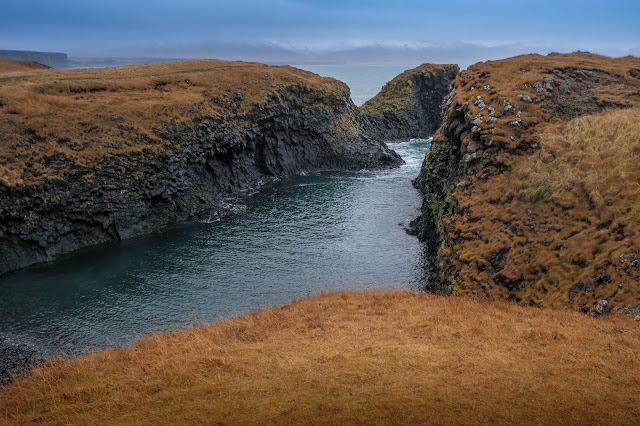 The image just above was one of my many efforts to get layers of depth into my landscape photographs. I'm sure if I had used a larger format it would have been much easier to have parts of the image out of focus. But I'm pretty sure that's not what I was going for.... 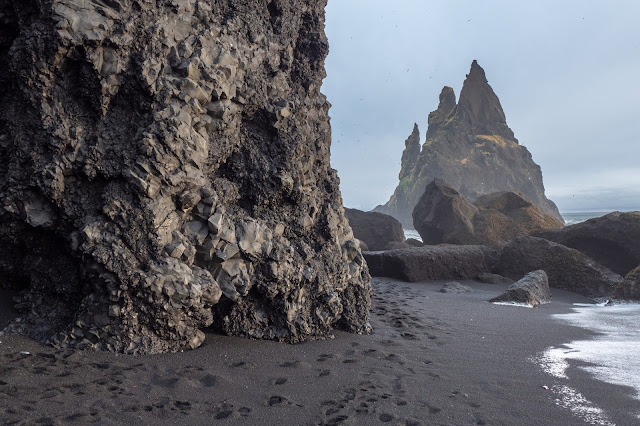 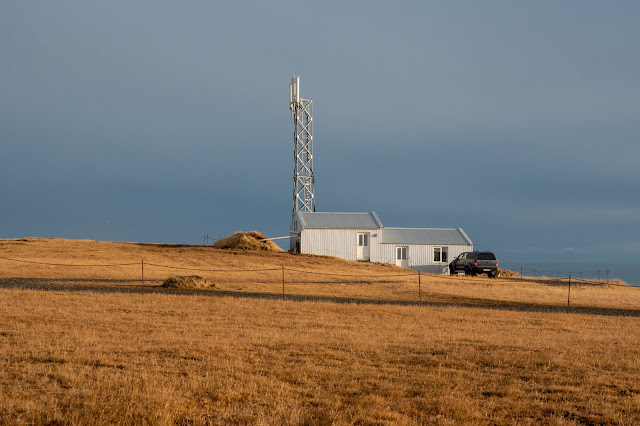 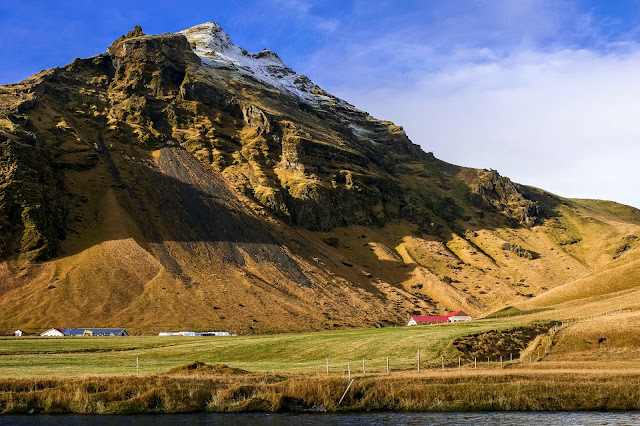 I loved that there were buildings with red and blue roofs in the lower middle of the frame. It was my attempt to show the scale of the mountain in the background. I couldn't resist keeping the white fence in the foreground. I realize a technique that's new to me and then I become like a dog with a bone and try to overlay that technique on everything I shoot... Tragic. Sad. Fun. 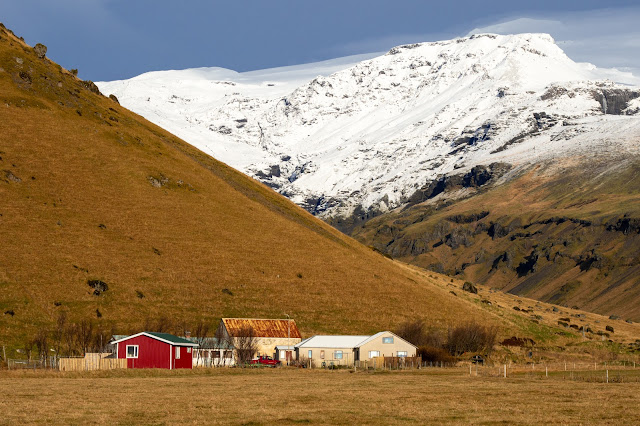 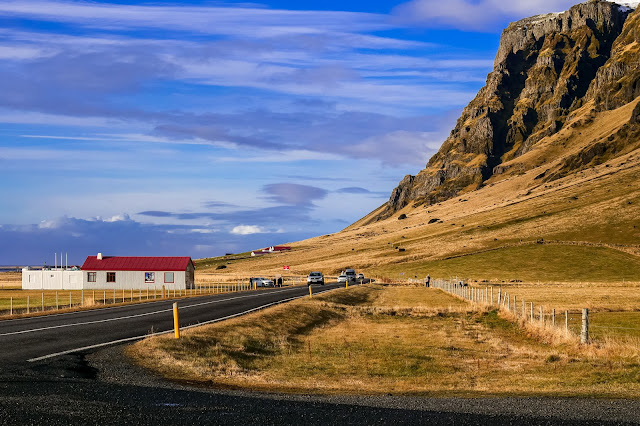 Kirk's idea of landscape heaven. Lots of "human evidence", diagonals, leading lines, Disney skies and fence that starts in the (right hand) foreground and goes ambling off in a classic example of "vanishing point" perspective. Now, if the building in the foreground had only been a coffee shop and bakery with hot muffins coming out of an oven and a perfect cup of coffee waiting for me on a spare and glistening countertop....

I'm waiting for my VSL group critique of the landscape stuff. It's all new to me...
Posted by Kirk, Photographer/Writer at 17:33 9 comments:

I'm a bit single minded about photographing people. With a camera in my hands I'm always looking for someone to put into my scenes. Sometimes it's to show scale. Sometimes it's just for fun... 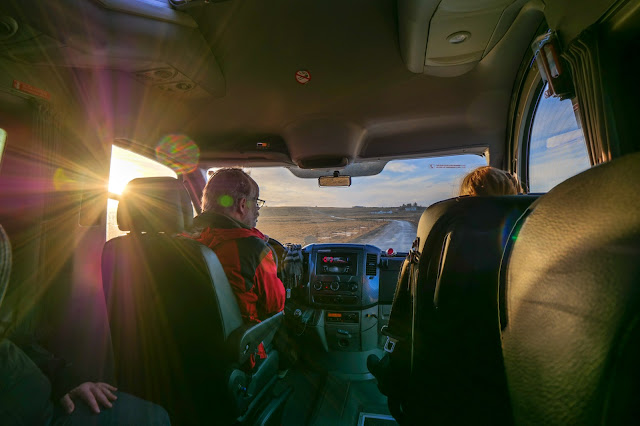 Our guide, Albert, pilots our Sprinter van toward our first photographic destination of the morning. Who can resist some nice direct sun flare. I'm sure my B+W UV filter helped generate some of that..
I liked sitting in the back row. It was four seats across and no one else liked to sit there because when we hit bumps the person in the back would bounce off the seat like crazy. Fine with me, I laid down across all four seats and napped between stops... 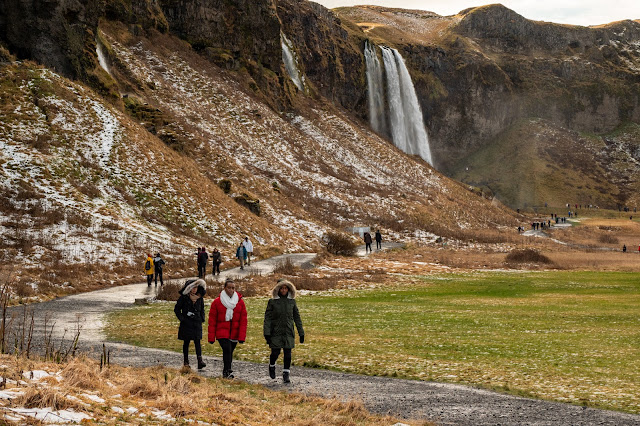 I can't resist a leading line, and S curve and some foreground/background contrast. I know I should have been looking at the waterfall but I couldn't wait to get some people into the foreground of my first variation of establishing shots. The red jacket against the green grass is always a bonus. 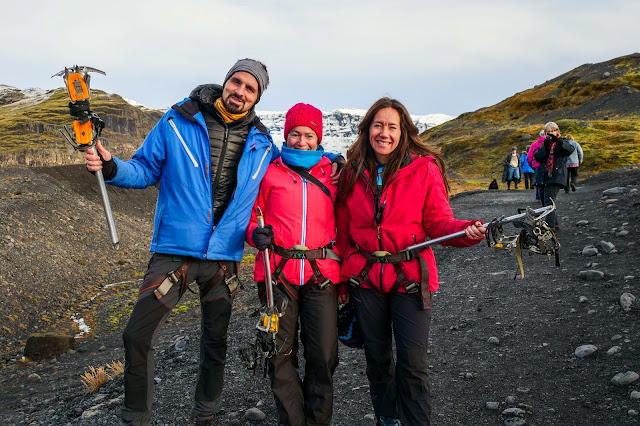 The glacier is behind me. But the people are more fun. The smile and interact. The glacier just sits there being cold and imperious. And cold. 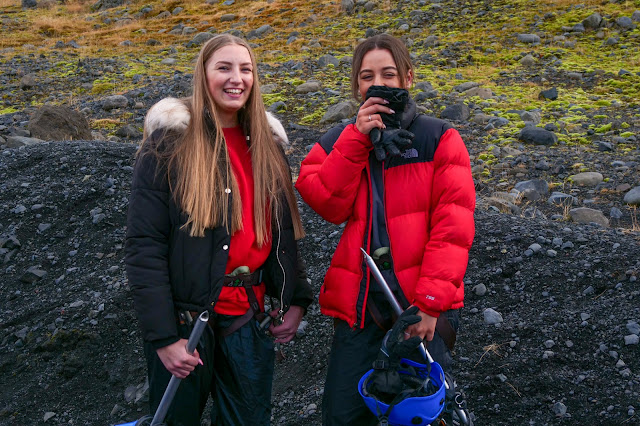 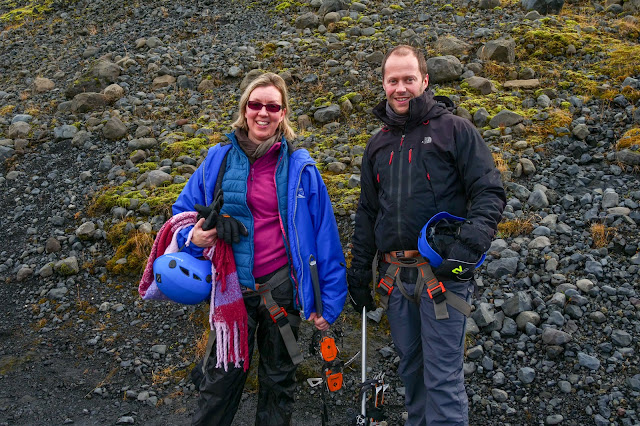 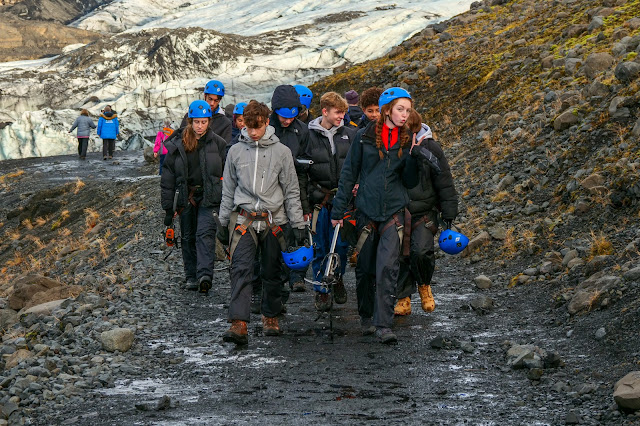 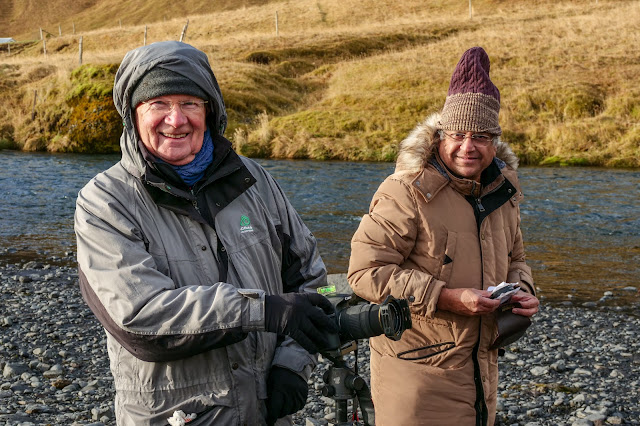 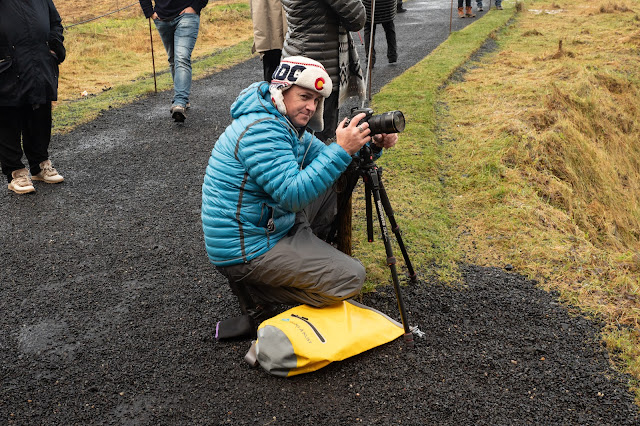 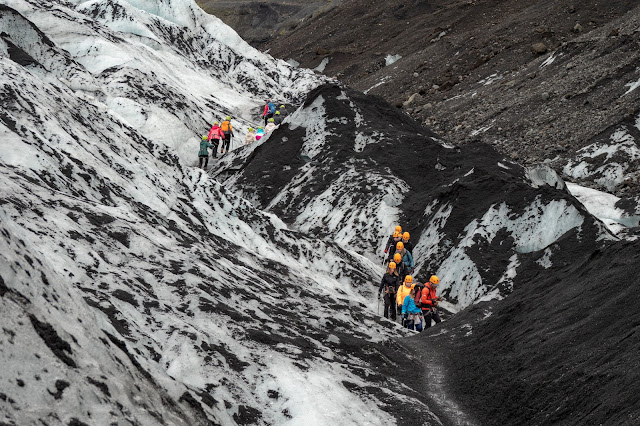 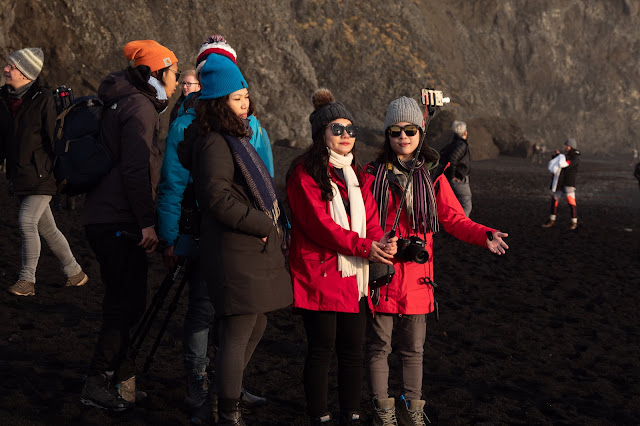 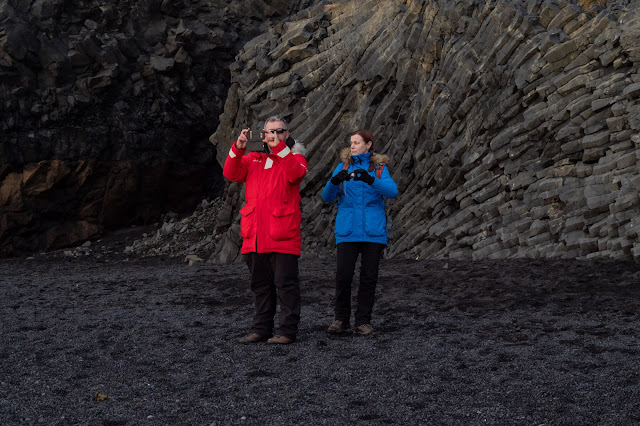 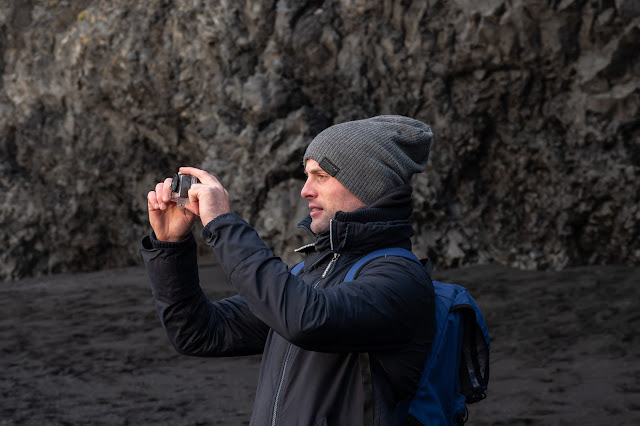 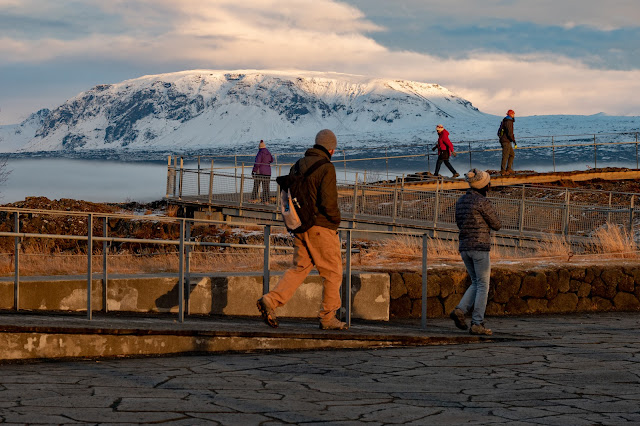 Foreground, mid-ground, background. And a bit of sun on the mountain top. What's not to like? Oh, and diagonals. Diagonal lines are always a bonus for me. 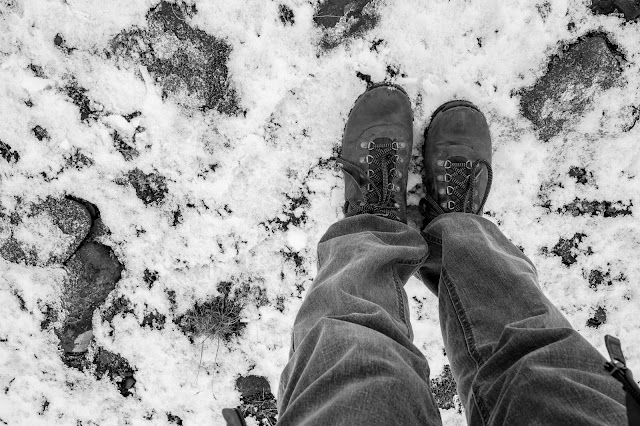 These were my second favorite hiking boots. They are comfy but the old Lands End boots (from their heyday in business) were the most weather and cold resistant.

All images happily shot with a Panasonic G9 and either the 12-100mm Olympus Pro lens, the 15mm Leica/Panasonic lens.

Posted by Kirk, Photographer/Writer at 17:12 No comments: