Love being home for the week. I got to do two wonderful shoots at Zach Theatre and I just finished my third consecutive swim practice this week. About as close to perfect as I can ask for.... 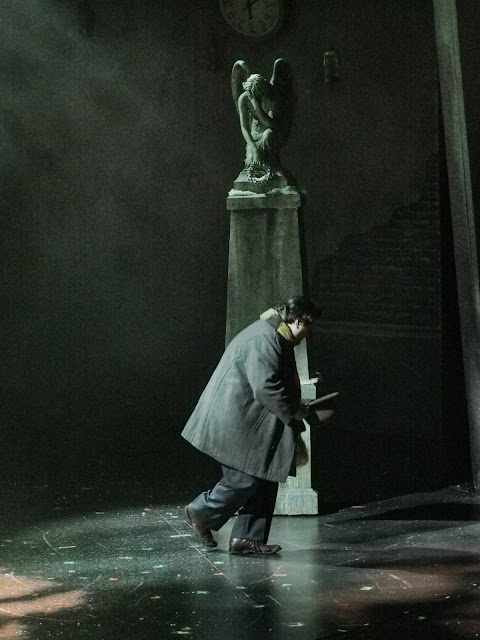 Scene from "A Christmas Carol" at Zach Theatre.

I photographed the image above with a Panasonic G9 and the 40/150mm f2.8. But what equipment I used is immaterial; the real question is: Why did I shoot this frame and what attracts me to it? This is a scene in which the Ghost of the future shows Scrooge Bob Cratchit going to visit his deceased son, Tiny Tim, in a cemetery. I was visually attracted to the way the lighting designer used spots to rake the side of the "angel" stature behind Cratchit. The scene is lit in a very monochromatic fashion and it adds to the feeling of sadness and gloom. One part that I particularly like is the bright light hitting the bottom right of the statue's pedestal and creating a hard contrast with the front of Cratchit's coat and face. My first inclination was to use a shot taken a fraction of a second earlier with Cratchit more or less centered in front of the pedestal but this frame, and it's off balance timing and geometry seemed to have more energy. That Cratchit is hunched over, carrying a heavy emotional burden, adds to the overall effect of the scene. In a final print I might tone down the two brighter, warmer spots on the floor at the bottom of the frame but only because I know other people will like that better....

So, after a hectic schedule last week I was delighted to be home this week. I've been shooting local stuff and doing lots of post processing but since my studio is ten steps from my house it's actually fun and low stress. I spent this morning post processing my take from last night's dress rehearsal of "A Christmas Carol." Belinda and I headed over last night to see the play, see theater friends and for me to photograph the show. For last night's foray it was Panasonic/Olympus all the way. We left with nearly 2,000 frames and I was very proud of myself to have whittled it all down to about 600 frames before I left the office for the noon swim practice today. I left Lightroom humming along, processing the images so I'd have a folder to upload when I got back.

Swim practice was great. Yesterday there was an issue with the water heaters and the temperature in the pool was about 76. Perfect for a competitive race but too cold for a routine master's workout. Today the pool was back in peak shape and the water was a luxurious 82 degrees, Fahrenheit. It's pretty amazing that the staff at the club is almost always able to keep the water temperature in a tight range since the pool is an outdoor pool and the weather in Austin can be all over the map during the course of twenty four hours.

I swam in a lane with restauranteur, Emmett Fox, and I did a quick glance around the pool and saw (gold medalist) Olympian, Tommy Hannan at our practice, in lane seven. Olympian (multiple gold medalist and former world record holder), Ian Crocker was finishing up coaching the kids club that practiced right before us. Pretty amazing to have two medal winning/record setting butterfly swimmers at one noon practice in a dinky little athletic club in west Austin, but there it is....

We started with a 500 yard warm up, and then got into a set of 3x200's that were half fast freestyle and half individual medley. We followed that set with four 150's within which we were supposed to descend (get faster) by each 50. We spent the rest of the workout alternating between sets of 50 yard sprints and sets of middle distance, 200 yard swims. The workout is just an hour but we managed to get in about 3200 yards.

Back at the office I uploaded my finished files to Zach Theatre and got back to the task of organizing my files for my big October/November client. I wanted to make sure I had the raw material backed up across three hard drives and also resident on a memory stick. Most of the images have been converted from raw to good sized Jpegs and uploaded to galleries on Smugmug.com; both for safekeeping/additional back-up, and also to share with the client's marcom team in order for them to make final selections for retouching. Still, with a big client and numerous jobs in process, I always feel better with a certain amount of file back-up overkill. 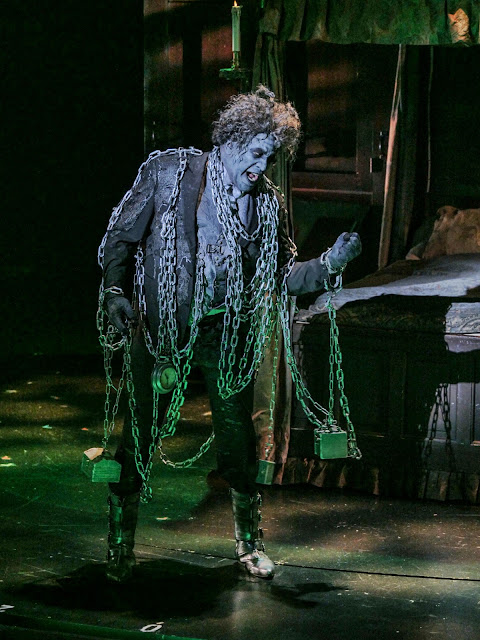 Roderick Sanford as "The Ghost of Bob Marley."

I have been amused by some comments I've gotten when I write about out-of-town trips. Several people have given me restaurant recommendations in various cities where I'll be touching down. Ah, they must be remembering the "good old days" of advertising photography when we were all staying in five star hotels and wrapped up each shoot around 4 pm in the afternoon so we didn't get stuck in rush hour traffic as we headed back to our concierge level hotel rooms to tidy up before ringing up the car service to take us out to dinner. All billed to the client's account. There seems to be a clinging mythology from then; that we still hew to a normal work day schedule on the road.

Sorry to burst bubbles but at least in my business we tend to be constantly on the move with multiple location projects. And most of the time we may be "flying in" to a nice, big city but it's because that's where the airline's hub is. The normal reality is that our flight arrives from Austin and I rush to some other, distant terminal to catch the second leg of my flight and do so within a window of about 55 minutes to an hour, from touch down to take off. I'm lucky if the line at the airport Starbucks isn't too long so I can grab a coffee and maybe even a sandwich to toss down in flight.

On an upcoming shoot day I'll fly out of Austin at 5:31 a.m. which means I'll be at the airport around 4:31 a.m. to ensure the checked luggage (lights, stands, winter wear) makes it onto the flight. We hit Charlotte at 8:59 where I wait impatiently for the same luggage and then find the little bus to the rental car "plaza." Where I'll wait impatiently while the person in front of me has tremendous difficulty deciding on just which car he or she might like to rent. That'll be the same person who is renting for the first time and would like all of the words on the rental contract explained to them before they move on.

Once I've got the rental car and I've got the location programmed into the phone I've got a two hour, fifty six minute drive to reach my destination; a rural, unincorporated township that just happens to be next to a remote infrastructure project. If it's like the town in Texas there will be one very old gas station as the sole business in town. And yes, that's where you can get the frozen burrito and microwave it for lunch. We'll shoot for two hours (if everyone shows up on time) and then I'll turn around and drive back to the Charlotte airport and head from there to a smaller airport in Indiana and, while flying, I'll pray that the rental car facility there stays open long enough to get me a car. Which I'll use to find my motel/hotel and check in around midnight. Food? There might be some fast food still open somewhere near the big highway but I have no idea how far I'll be from the big highway.....

So, when you suggest I might like this little French bistro just north of Charlotte I laugh and cry a little bit and wonder what the other photographers do. Me? I've learned to pack Power Bars and to buy bottled water whenever I land (remember, it doesn't go in through TSA) and occasionally treat myself to a Snickers bar for a decadent dessert.

My mission is to get to where I need to be, get the shots and get to the next destination. I won't be site seeing.

But for now I'm relaxing in Austin. Getting some swims in every day. Walking through downtown with new Fuji cameras and then banging on the keyboard to post process a backlog of files. Tomorrow I'm taking the whole day off. No work. No blog. No phone. No travel. Sounds like a vacation......

Posted by Kirk, Photographer/Writer at 18:17 13 comments: