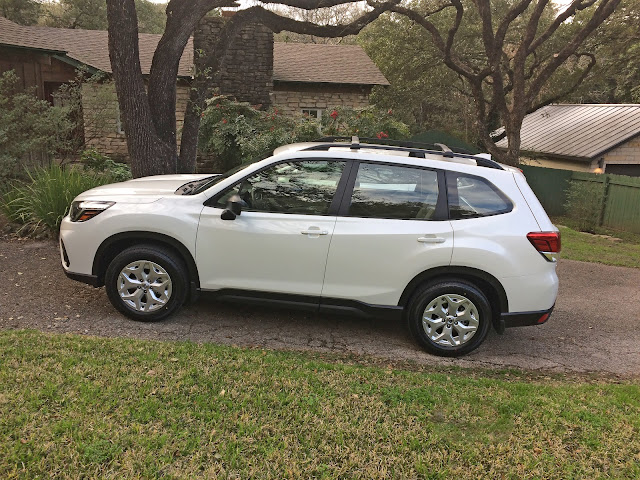 After every six or seven years of hard use I like to sell off my primary work car and get myself something new, fun and (very important) practical to use for my own general transportation. I'd love a cute little sports car like a Miata or an Acura but I still do physical work to earn my living and I need my car to do more than just slip around corners nimbly and sip gas. I need a car that will get me and a couple hundred pounds of photography and/or video gear all over Texas in relative comfort and safety. And I want my car to be economical because buying all of those fun cameras adds up so quickly....

I also want a car that's filled with safety features so I can dodge as many crazy drivers and weird, Texas highway situations as possible. The Honda CR-V (thanks for the years of mostly trouble free service!!!) was a good photographer's car. I enjoyed driving it but it's aged out of modernity and needed to be updated. Also, cars tend to get sloppy over time and I was starting to hear squeaks and rattles that sounded as though they might presage some future maintenance with which I would not want to deal.

I test drove all the small SUVs in the category I think is most effective/efficient and still fun. That includes: the Toyota RAV4, the Mazda CX-5, the AWD CR-V from Honda, the VW Tiguan and even a Mini-Cooper Countryman. But the very last car I test drove was the Subaru Forester. It felt the best. It had the most solid ride, had the best interior layout, and comes with a great reputation for reliability and safety.

I test drove one on a Saturday and then sat down with a sales person to configure my version. All Foresters have the same engine and drive train. You can spend $25K or $35K but you will get the same overall performance. The only options that affect handling are the tires and wheels.

I have had my fill with sun roofs, moon roofs and other useless holes cut into the tops of cars. I don't like them, don't use them and don't want them. I wanted a solid roof.

The Forester I wanted didn't quite exist the day I shopped so we made one. I started with a base model (specifically because it is the only version with no moon roof) added alloy wheels and bigger tires. Added in all the safety features and added a roof rack, and upgraded seats. The dealership did a search and found one configured exactly as I wanted it locally. I went in this morning, test drove it, liked it, bought it and took delivery. I'll need to take the car back to the dealer in a couple of weeks to have the window tints applied. Darker in the back but light enough in the front (driver and passenger) so that a west Texas sheriff will be able to see both of my hands on the steering wheel in the dead of night as he approaches with his .44 magnum drawn and ready...

The car is white. Pearl white. The interior is light gray. I live in Texas and anything I can do to diminish the heat load is a very good idea. That's also why I am adding UV and IR blocking window tint.

The interior space is perfect for a photographer. The lack of a moon roof adds almost an inch and half to the interior height. The rear seats fold down quickly and easily and almost completely flat. A cargo net comes standard. There are ample tie down points in the cargo area. The cargo area and rear seat backs are finished in a thick, black rubber-like material that should hold up well when confronted with big Manfrotto gear cases, gear carts and loose C-Stands.

It's not a race car but it holds its own on the freeway and still gets about the same gas mileage as my old (non-AWD) Honda CR-V. Of course, it's all wheel drive and has the standard 185 horsepower motor and a 7 speed CVT.

The Honda CR-V wasn't all used up yet but the car was handling a lot of emotional baggage for me. It's the car I used to rush to the hospital when my mom went critical. It's the car that helped clean out my parents' forty years of accumulation from their house, and it's the car that's taken me on nearly eighty 150 mile round trips to visit my dad (and his attorneys and accountant) in San Antonio
over the last 13 months. I was starting to have Palovian episodes of depression every time I got in the car lately since it's been the facilitator in my journey of heavy responsibility and, well, grief during the hardest parts of my recent life.

The new car is like a clean sweep. I'm starting from scratch. I'm also starting to rotate cars for trips to San Antonio. Sometimes I'll borrow my wife's Subaru Impreza for the trip. On rare occasions I'll borrow Ben's Toyota Corolla. For bigger business meetings, house sale closings, etc. I generally rent something for the day; like a Suburban or an Audi. I don't want to put the burden on just one car anymore.

The Honda bore the brunt of my long 2018. I'm handing it off to someone for whom its baggage doesn't exist.

I have my first location shoot tomorrow. Not a lot of gear but a fun, local introduction to the car in its support of a photo shoot. I'm already happy.

Least favorite feature: the engine shuts off at stop signs and stops in traffic in order to save on gas.

My most favorite feature: the button that turns off the "feature" that shuts off the engine at stops.

Best interior feature: The driver's seat is great. Some it the visibility.

Back to our regularly delivered programming.