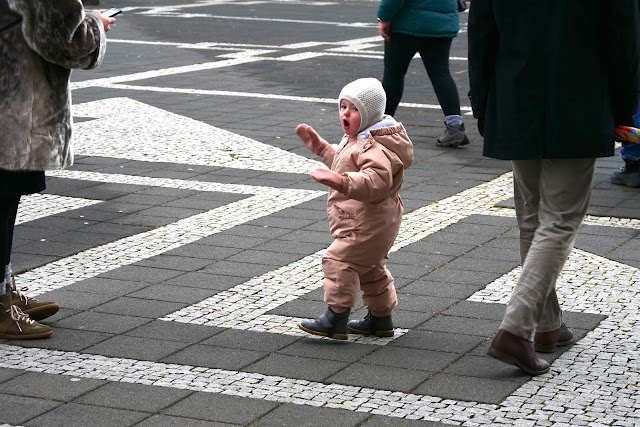 This image has nothing to do with the content of this particular blog post.
I'm putting it here so I can look at it and remember what cold weather felt like.
We had heat warnings here in central Texas because the combination
of heat and humidity gave us a "heat index" of between
110 and 112 degrees, Fahrenheit. I long to walk
on slippery pavement again.
Reykjavik Iceland, 2018.

I was up this morning at six a.m. and eating my bowl of 2% fat Greek Yogurt, Muesli and one cup of blueberries by 6:20, washing it down with a magnificent cup of my own coffee. Packed and on the road by 7:00 am and headed toward the city of San Marcos to meet up with two representatives of an Austin ad agency, and the owners of a techie, hardware, start-up company in their labs.

The assignment was a day long project to develop photographic content for the company's website and collateral advertising. We spent the morning photographing in various lab environments and the afternoon photographing at two different dental practices (the use target for the newly developed product).

The ad agency and I scouted the locations last week so we hit the ground running in each spot today. I packed just enough equipment to light every interior shot with LED lights but I brought along a Godox AD 200 flash system to use as a fill light for our one exterior group shot. Everything fit on one cart and we worked off the cart and dragged it around with us from lab to lab in the morning. In the afternoon we were working in small exam rooms so I packed down well enough after our first location that our lights and three light stands fit in just one Tamrac rolling lighting case. I packed two of the Godox SL60 W monolight style LED lights, and two of the Aputure 682S spot, flat panel LED lights. Just what the doctor ordered for such small spaces. With one SL60 bouncing off a white ceiling, one SL60 in a 36 x 36 inch soft box, and an Aputure LED panel supplying adjustable back light I was pretty well set.

We photographed the client's new product being used in dental offices with a combination of extremely tight (60mm macro) shots and wider shots done with a Fuji 16-55mm f2.8 on an X-H1 body. We also photographed our hygienists (models) and our patients (also models) engaged in dental exams and using our client's new device in wide, medium and tight shots. In the small rooms I found that the combination of two SL60s, bounced off a ceiling and pushed through a soft box, allowed me to work comfortably at 1/125th of second, f4.0 and at ISOs of between 400 and 800. If there was a lot of movement in in the shot I'd push the ISO and work at 1/180th to 1/250th of a second. If we needed more depth of field for the tight product shots I'd move the aperture to between f5.6 and f7.1 and then push the sensitivity. My ISO dial got more of a workout than the two other main controls.

While the agency had the best of intentions with their scheduling they forgot to factor in the typical human task friction endemic in most shoots of this kind and we fell far enough behind schedule to cause a panicked retreat from even the general concept of lunch. Of course, this was not my first rodeo and I had packed enough Peanut Butter Cliff bars to get myself through the day without crashing or hitting the wall. It helped that there was a coffee shop close by the second location in which we photographed, and a helpful advertising intern to pick up the liquid of good life and deliver it into my ready hands.

In several shots we had big, long hallways or very large rooms and I chose to lean on the existing and ample florescent lighting while using an LED in a soft box as a main light and general fill. But, it's never that simple as the LEDs are pretty much perfectly balanced for daylight while the florescent tubes were the usual plentiful but cheap variety that makes everything a ghastly yellow green. Without filtration I could have my choice of a white balanced background combined with a main subject riddled with magenta, and way too cool, or I could do a custom balance for my foreground subject and watch the background go radioactive green. I chose neither and reached into my lighting case for a sheet of Rosco Tough Plus Green. I added it to my main light and it was more or less a perfect match for the background which allowed me to make a global, custom white balance for the whole scene; and it looked darn good.

We did many different shots in the labs, two big group shots in the blisteringly hot outdoors, an hour in a dentist's office in San Marcos,  a daredevil drive up IH-35 in midday traffic (which is like most other city's Christmas season rush hour traffic-- stop and go all the way in) and finally ended up in a modern and somewhat chic dentist's office in south Austin. There we shot a never ending combination of hygienists, dentists and patients all involved, somehow, and in some design combination, with the client's product.

The only time I got to sit down and not have a camera in my hands was while I was in white knuckle transit between locations. But the beauty of spending my usual down time swimming and walking with cameras in my hands is that I still had a reserve of good energy and focus even after we crested into overtime at 6pm. There is something fun about being the oldest person on a location and the only one not on the verge of exhaustion and collapse.... (Always eat a great breakfast, always carry protein bars, always send someone for coffee and water, always be the last one to quit).

We wrapped up by 6:45 this evening and I piloted home through more evening traffic that I ever remember seeing. I didn't have sufficient motivation to unload everything but I dragged the Airport Security rolling case into the studio, put the cameras on their chargers and downloaded the memory cards. I'll do the big edit and post over the weekend and deliver on Monday morning so this job doesn't step on the feet of the next job (Monday, Tuesday and Wednesday we're doing the WP Engine Annual Summit at the Fairmont Hotel --- it's right next to the Austin Convention Center).

Happy domesticity. I drove up to my house and got to see my brand new driveway. A house re-do by the next door neighbors (since replaced by much, much better neighbors) had cement trucks traipsing across the old concrete entry way and cracking the surface. The new neighbors and my family split the cost of making a much needed driveway entry upgrade. The downside is that we can't drive on said new concrete until it cures; and that's projected to be in about two weeks. That means that loading and unloading my car requires a hundred foot journey over the driveway of the neighbor's on the other side of the property followed by an adventure dragging the carts through my front lawn. But damn! That new entry way is looking fine!

Belinda and Ben had fun advertising and public relations adventures to talk about over dinner and Belinda made a wonderful sausage and vegetable soup which ate better than it sounds; by a long shot.

The week started with a trip to San Antonio to see a probate judge in the company of my elder law attorney. I was assessed to be worthy enough to be the executor of my dad's estate and got all the paperwork done to proceed. I processed insurance forms and messed with estate accounts. Since I feel responsible for my brother and sister this fun new responsibility adds a bit of stress and friction but nothing compared to the time and energy I spent taking care of my dad in his last year and a half. Hard work but it comes with the reward of knowing you did everything you could to make a loved one's last months in this mortal coil as happy, positive and comfortable as they could be.

I'm looking forward to two solid weekend swim workouts with no bookending tasks, responsibilities, obligations or appointments after either of them.

I'm back to my long time focus on making photographs and I'm loving every minute of it.

Warning to my blog readers in the Calgary, Canada area: my current plans include visiting your area in the third week of July. Meeting for at least coffee will be nearly mandatory. Also a visit to The Camera Store and perhaps even an audience with the reigning kings of video photography gear reviews, Chris and Jordan (now plying their talented trade at DP Review).


Posted by Kirk, Photographer/Writer at 21:33 5 comments: