Walking the lake instead of downtown. Using a prime lens instead of a zoom. 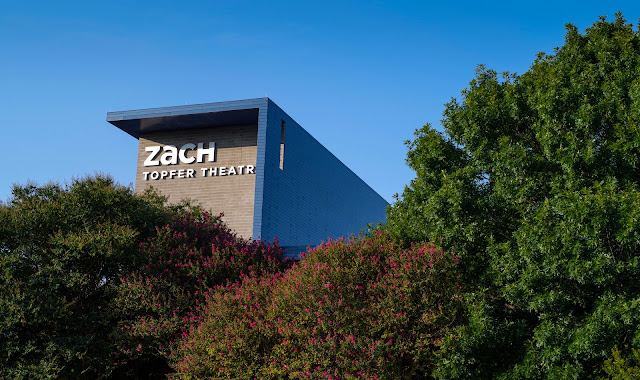 A view of Zach Theatre's main stage from the Hike and Bike Trail.

As of now next week is fully spoken for. We have portraits to shoot in Knoxville, TN. A video project to complete at UT Austin, and a photo assignment after the Friday show of "ANN." I've been swimming in a pool that's too hot and I figured I'd take a break, change the scenery and get my exercise this morning with a long walk around the Hike and Bike Trail that surrounds Lady Bird Lake (which is also the Colorado River). I've talked about running and walking on this trail in my blogs for about a decade but I haven't really shown many images of the actual trail so I thought I'd take the "eccentric" camera out of a spin this morning (Friday) and give you some idea of what the trail looks like.

Plus, I thought I'd play around with captions; just for fun. For the curious camera lovers out there the "eccentric" camera is the Pentax K1. I attached the 50mm f1.4 AF lens to it and just blasted away at the scenery. It's kinda fun and kinda retro to hoist and operate an "old school" style DSLR once in a while. The whole experience has its PROS and CONS. Sadly, no pre-chimping. One actually has to commit to an exposure and the REVIEW the image afterwards to make assessments. Very primitive indeed.

It's an interesting contrast for me since I spent time at the museum yesterday with the X-Pro2 and the 35mm f 1.4 lens which is a whole different photography/gear experience even if the lenses are a relative match for angle of view.....

One nice thing about such a weather sealed camera body is that I need to wipe the sweat from my hands off the body but will probably just take the camera into the shower with me.....Do you think I'll need a lens or body cap on the front???? 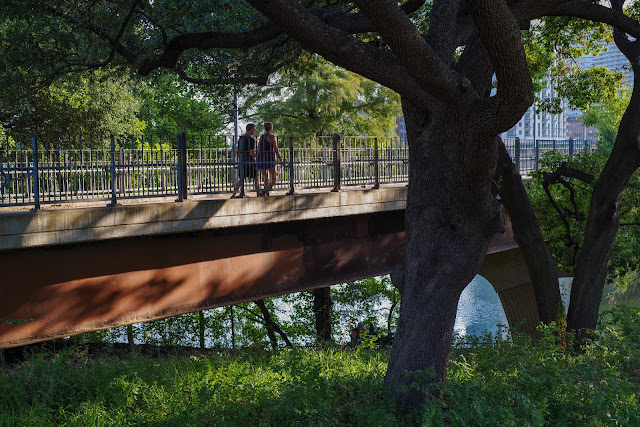 This is part of the Pfluger Pedestrian Bridge which crosses Lady Bird Lake. The bridge runs north and south while the river runs west to east. It's a beautiful bridge and even has gardens and flower boxes along the edges. It's nice to be able to cross the lake without having to do so with a line of stagnant cars in rush hour. Very civilized and one of three good pedestrian options for navigating the north/south transit of the lake/river. 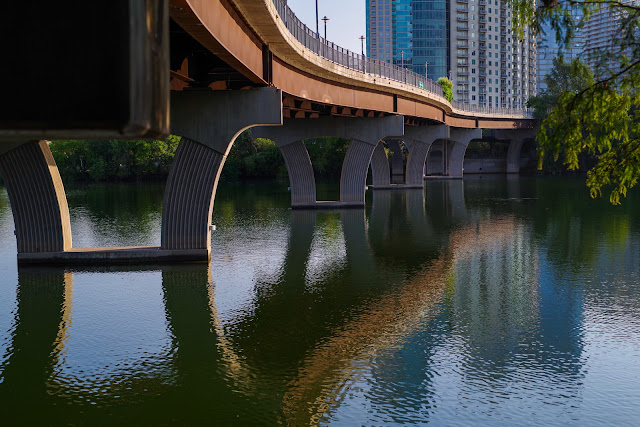 This is the Pfluger Pedestrian Bridge as seen from the Hike an Bike Trail on the south side of the lake. 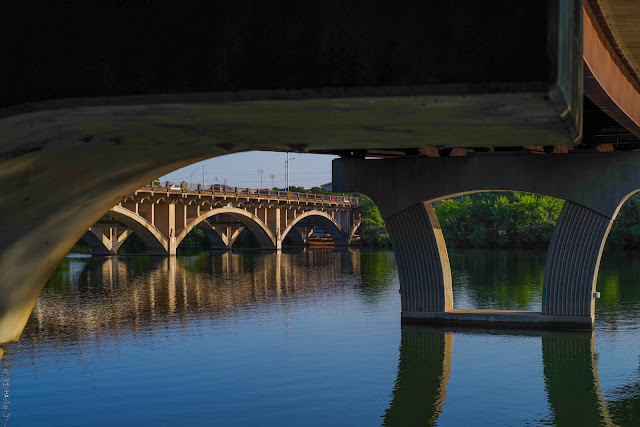 The view from the area below the Pfluger Bridge looking west to the Lamar Blvd. Bridge which used to be the only convenient north/south bridge for cyclists, walkers and runners. And a dangerous option it was....Narrow walk ways butted right next to lanes of fast moving cars. And yes, a number of pedestrians lost their lives on that bridge... 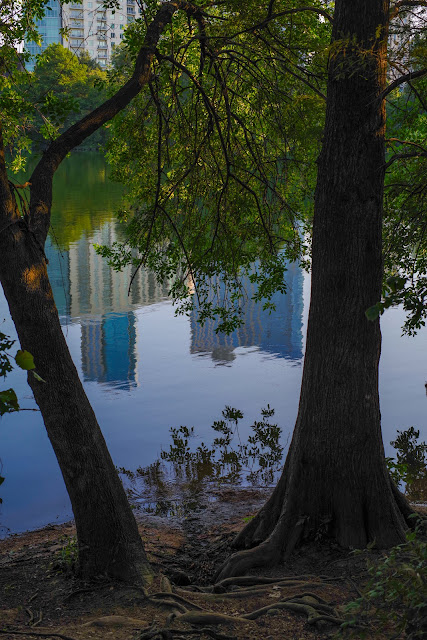 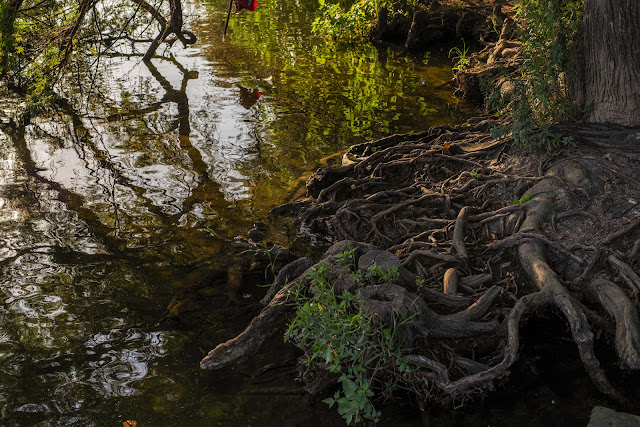 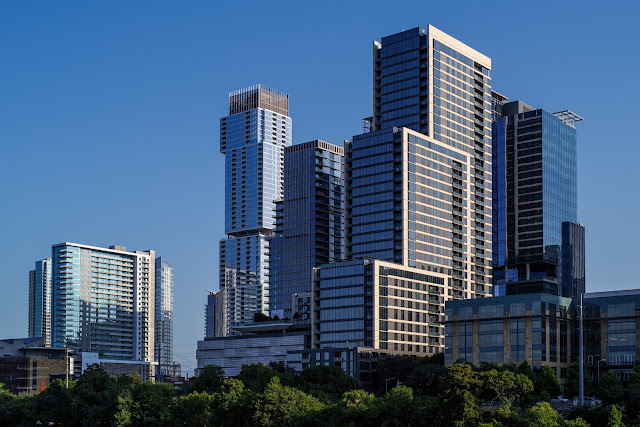 A view of the newest downtown construction project, recently completed.
This view is from the Pedestrian walkway on the First St. Bridge.
That walkway is totally separate from the part of the bridge open to cars.
At the south intersection of the river and First St. are a bunch of water fountains, out door showers and a large dog park. It's a hub for so many runners and walkers.... 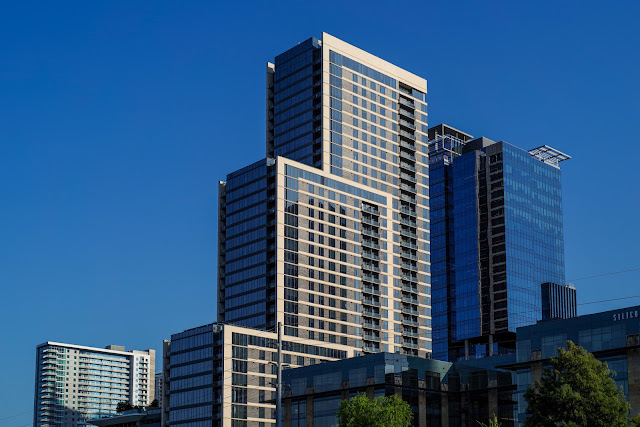 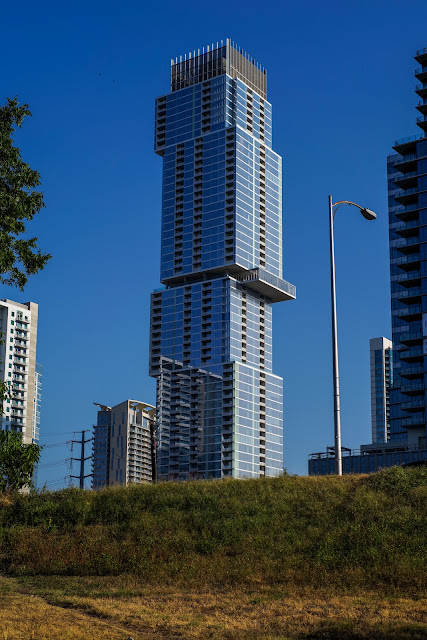 This is a view of the "Jenga" tower from the north shore of the lake. I'd never seen this particular view of the building before but I've become a bit fascinated by the project. It's so odd to see a building that looks so .... unbalanced? 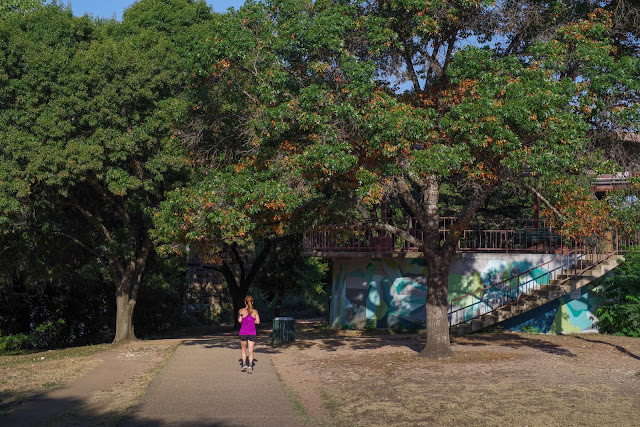 When I first started running the Hike and Bike trails some 45 years ago there were far fewer trees, and the trees that were there were much shorter and smaller. Now, if you are running the five mile loop on the trail you'll have shade from the big, mature trees for about 1/2 of your walk. It really makes a difference when that "feels like" temperature settles in around 110 degrees for days a a time.
Because, really, you can't just give up on your running.... 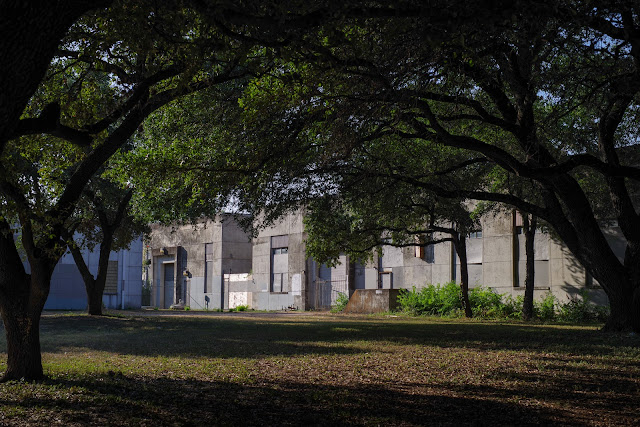 Part of the city's old power plant which has been unused for many years.
It would make a great studio but it's only zoned for municipal use. 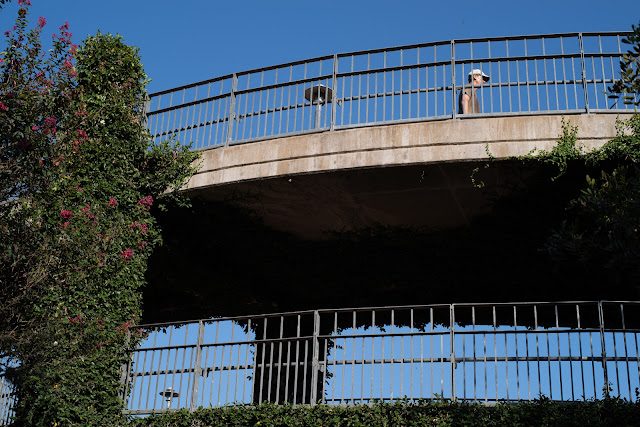 This is a circular ramp way that allows runners and bikers to descend from bridge level to train level without having to use the stairs. It's kind of cool that it's covered with ivy now. Nice place to stop and hit more water fountains. This is on the north side of the lake. 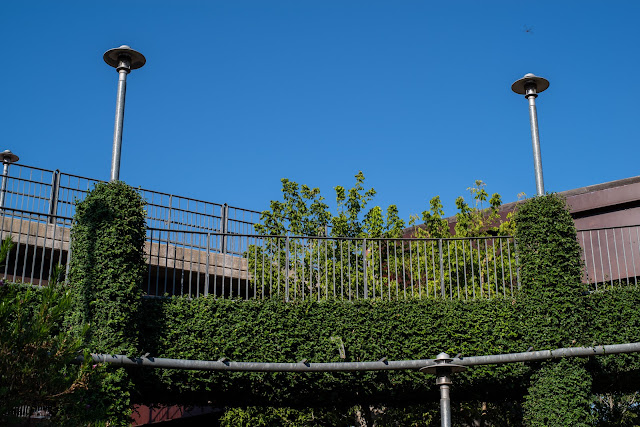 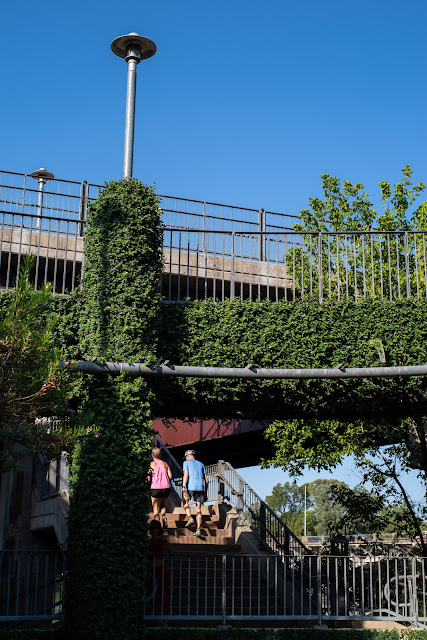 When it's not 96 degrees at 8:15 in the morning the trail is utilized by many more people. Today was a light day but I'm guessing it's because everyone is getting ready for their kids to go back to school next week. Traffic coming soon. 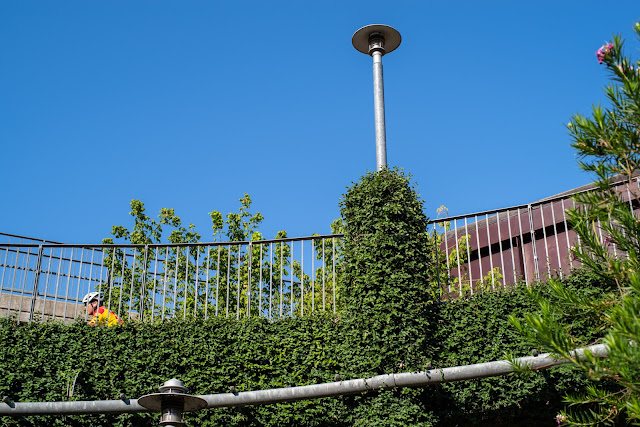 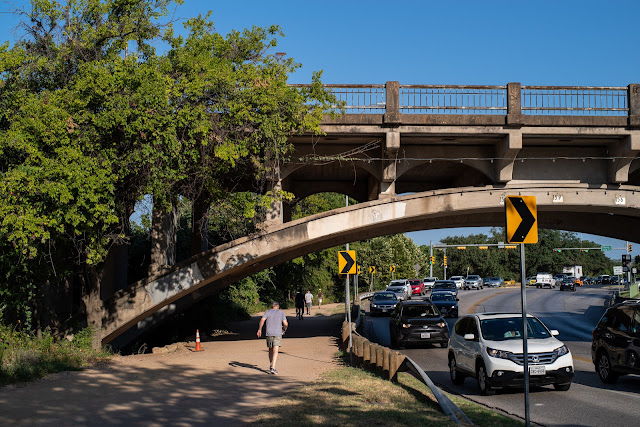 This (just above) is a historic site. Just past the arch of the bridge is the spot on the trail where then governor, George W. Bush was nearly run over when a speeding garbage truck lost control and jumped the curb, barely missing him. George W. Bush was a regular trail runner back then.
Lousy president but turning out to be an interesting and quite likable fine art painter. 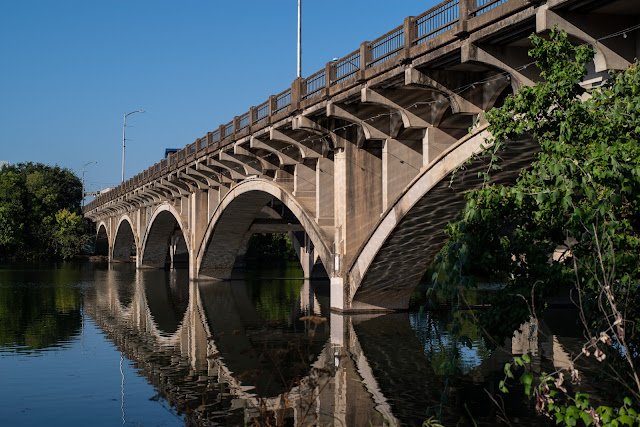 This is a view of the Lamar Blvd. Bridge from the opposite side. I'm always a sucker for the reflections. 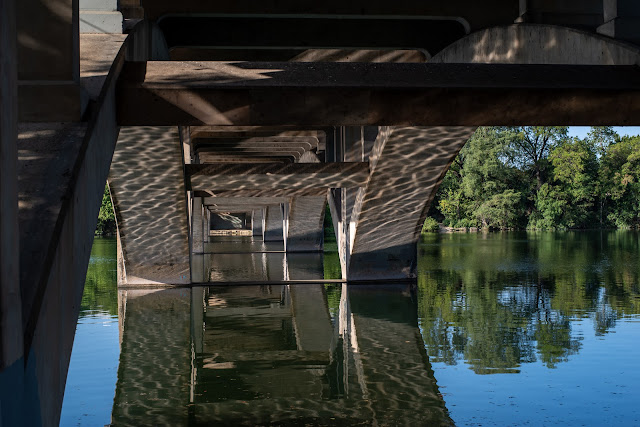 From underneath the Lamar Bridge, looking south. 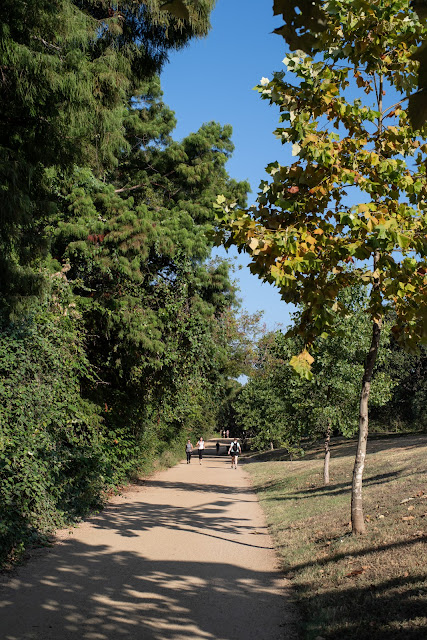 On the north side of the trail and heading west. 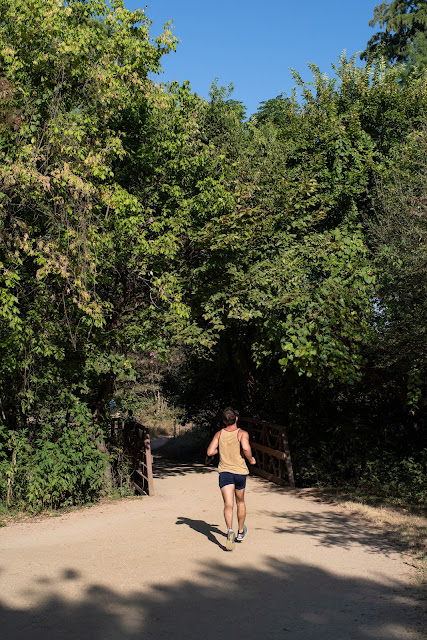 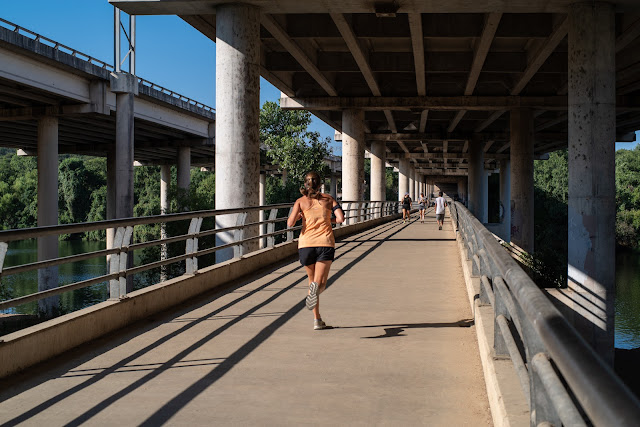 There's a five mile loop that runs from the Mopac Expressway to First St. and then back to Mopac. Mopac and First St. are the book marks for this but the Pfluger Pedestrian Bridge is kind of in the middle of the two. You have longer options. There is a part of the trail that goes over to IH35 and is about 7.5 miles and a longer loop that goes all the way to a dam in east Austin. That's a 12 mile loop.
If you go from Mopac Bridge to Pfluger and back you're at a bit less than 3 miles.
When I was younger and in better shape we'd do the 12 mile loop. Now, as a point of pride I won't go less than the five mile loop. Maybe when I turn 80 I'll pare it down to the three mile route....
But maybe not..... 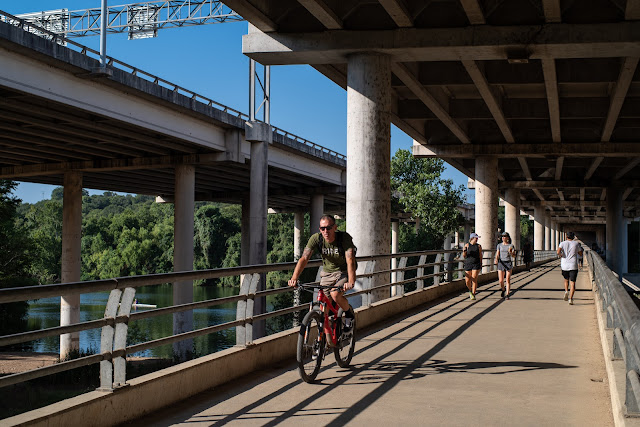 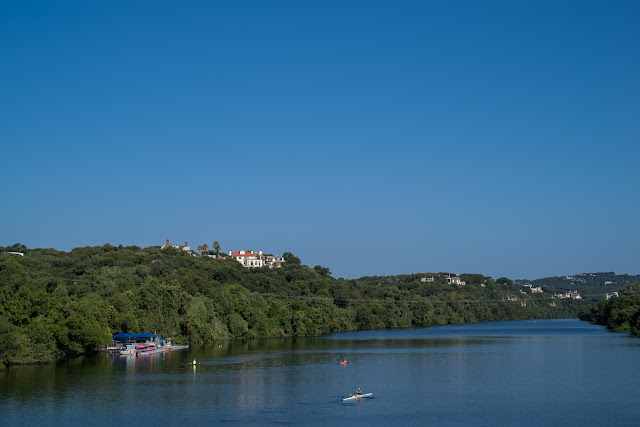 Looking west from the Mopac Bridge. That's the part of town where the real money lives. 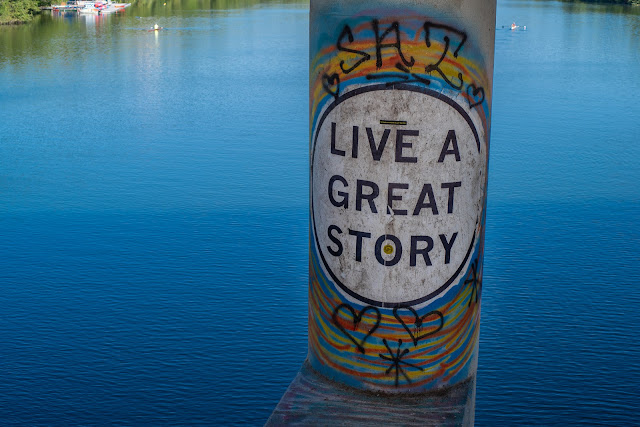 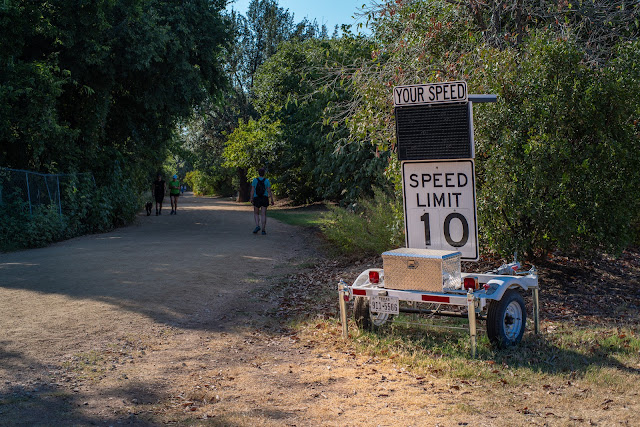 Electric scooters are banned from the trail. That's a great thing. Now there is a pilot program being run to slow down the bikers so the danger of pedestrians and bikers intersecting at blind corners is cut down. Funny to see a radar speed thing on the trail. I tried to run toward it but could only get it to 8 miles per hour. I'm not a moving hazard....

That's the trail I've been walking and running for nearly 44 years.
I hope it is here forever. Now it's Ben's favorite running destination.
He's been on the trail since he was a tiny guy in a baby jogger thingy.
I tell him to keep the habit up so he can run fast when he gets ..... more mature.

Posted by Kirk, Photographer/Writer at 09:30 14 comments: