Esther's Follies. Setting up for the next shot... Always. 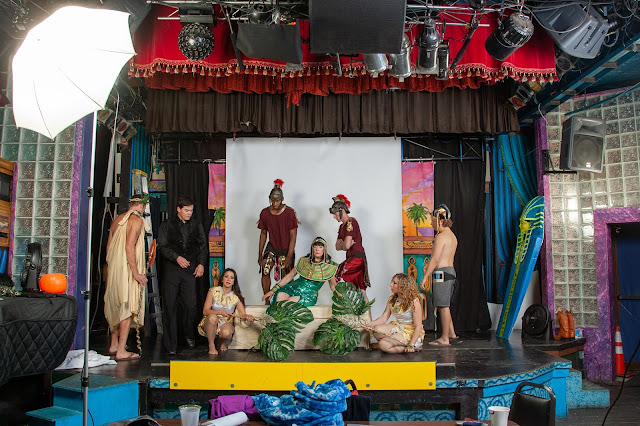 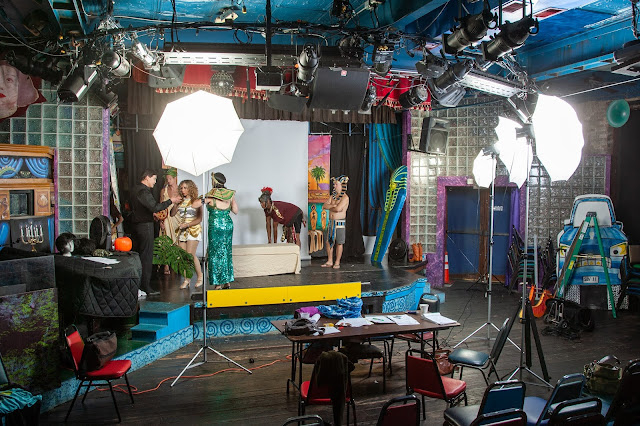 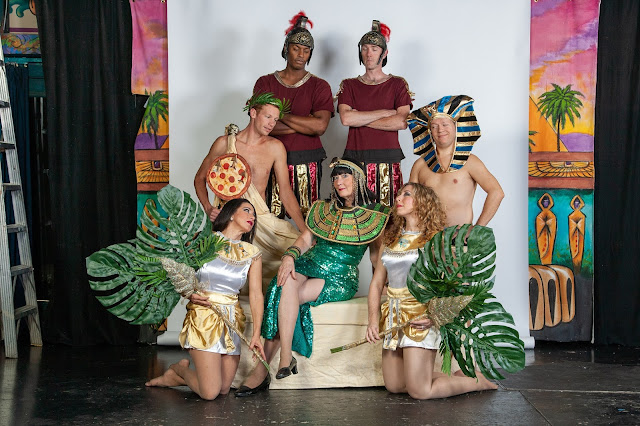 I've been trying to get organized. It's a chore. And a bore. But sometimes you find little treasures in the folders. 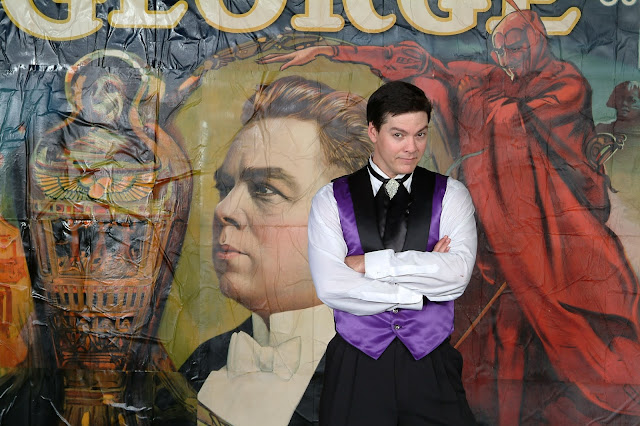 Ray Anderson. Magician. Esther's Follies. Austin, Texas
(Wow. That's a Fuji S2 file from 2002. They had the color sorted out just right!!!)
I got a call from a university professor who is writing a book about some aspect of live theater costume design. She really wanted to use several photographs I'd taken many years ago for Zach Theatre. The only information she had was the name of two different shows and the year in which they were produced. She also had two tiny thumbnails which had been renamed. They no longer had any metadata or identifiers. Before I could commit to licensing the photographs to her and her publisher I thought it would be a good idea to make sure I could put my hands on the photographs.
The images were taken in that odd time frame which occurred after I stopped photographing shows with film and before I started making huge web galleries for the marketing team at the theater to use. In those early days I'd shoot raw, convert to large, fine Jpegs and then send over the images to the art directors on either a DVD or a small, portable hard drive. Lots and lots of "sneaker" transfers until bandwidth got fast enough and I got organized enough.
From about 2001 to 2012 no matter which way I delivered the files I was careful to back them up to DVDs. I'd keep copies of a show's photos on a hard drive and also on two identical DVDs. That way, if all hell broke loose at least one of the back-ups would work.
I looked at the photos I was taking from a photographer's point of view. By that I mean that I was hellbent at the time of making sure we'd have access to these images even twenty years later, if we needed them. The staff at the theater saw them in a different way. Once the show was produced, and tickets were sold, and the run was over so was their need for photographs. There may have been some attempt to archive the images at their offices but if there was it's still a mystery to me. Their attention span, where images were concerned, was fleeting, at best.
That never bothered me since I kept my work filed away close by.
Somewhere around the end of 2012 we were able to procure fiber based internet service and along with the tremendous boost in speed and the newfound stability I discovered that I could now (more or less ) efficiently upload all the show files to a gallery on Smugmug.com and also send a full set of images from Smugmug.com to the client by means of a full gallery download. Links generated by Smugmug.com
This more or less coincided with a halt to DVD production almost across the board. My expenditures on DVDs for long storage fell to zero and was replaced by a commensurate spend on external hard drives. A major difference though was that I now, via Smugmug.com, had a full back-up in the cloud and that helped me feel less dependent on DVDs as the "third leg of the stool."
But the recent request has me going back into the DVD archive and it's a mess. I had DVDs filed by year in folders that would hold 144 disks. But sometimes we used the DVDs and they didn't always wind up back in the right place. It was a busy time for daily production ten years or so ago.
Yesterday I pulled all of the binders from 2000 to 2015 and pulled out all the DVDs (and some CDs!!!) that were related to theater photography to find the shows connected with the two desired images. And all at once it dawned on me that I could pull all of the images off the DVDs into a small hard drive and the  upload each production, show and marketing project into the cloud galleries. Then, in the future, when requests come in (which they regularly do...) I can just direct the requestor to the appropriate gallery and go about the rest of my day.
I also noticed a dozen or so DVDs for the Esther's Follies troupe and I'm doing the same with those files.
There is stuff I haven't seen for nearly 20 years but I'm amazed at how well the files stand up. Especially the set up shots which I metered pretty carefully and also shot in raw. I'm pulling those show files into Lightroom so I can convert the Kodak, Fuji, Nikon, and Olympus raw files into nice Jpegs to upload.
The film projects are all in 8.5 by 11 inch envelopes and the envelopes have the show names, dates and any pertinent technical information written on the front with black pen.
After I get through with the DVD work load I'll start pulling all the image folders from a motley collection of hard drives and make sure they are all intact and have had their images uploaded. It's a chore but at some point someone at the theatre will understand that these are the only visual documents of several hundred shows, done over decades. Hmmmmm. Maybe they'd be interested in buying the material and the copyrights? Naw, I'd just go buy something silly with the money....
At any rate, after a good swim with the combined swimmers of the two morning practices at one long session, and a three mile walk with Belinda, I think I'm ready to spend this gray and dismal looking day doing some long overlooked organizing. Either that or I'll start a bonfire and make short work of the "filing."
Posted by Kirk Tuck, Photographer/Writer at 14:16 2 comments: