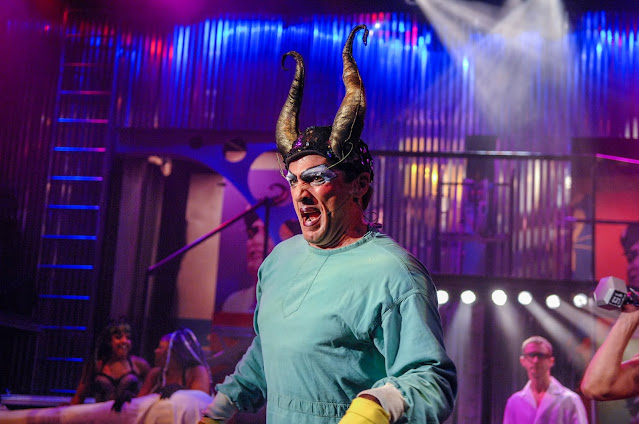 Joe York.
From a purely visual standpoint Zach Theatre's 2004 production of "The Rocky Horror Picture Show" was near the top of all the plays/musicals I've photographed for them. While the production was done in the smaller, Kleberg Theater and not the giant, new Topfer show space, the set designers, set production crew and lighting departments made outstanding use of the resources they had. Added to that was a full court press by the costume shop.
By 2004 all of our marketing and rehearsal photography had changed over from a digital/film hybrid approach to being completely digital. I was using the best Nikon camera the company had at the time; the D2X. When I look through the files from this show (part of my recent burst of archiving...) I am struck with several thoughts. One is that, at the time, I really, really depended on my 85mm f1.8D lens for about 80% of my show pix. I carried a wider angle lens, or a zoom, on a second camera for those times when there were wider ensemble shots needed but for pulling out characters while preserving a good representation of the background the 85 was near perfect. The second observation is that the ancient and very cheap, screwdriver driven AF lens on the D2X body was very, very quick at autofocusing and locking in on the focus point. Makes me nostalgic for lesser levels of technology and higher levels of actual, in-hand performance.
There is so much written (and spoken on video) about how vital; ABSOLUTELY VITAL it is to have a camera with hundreds of focusing points and whip fast continuous autofocus but after looking at samples from shows up to two decades ago I think camera makers had already done a fine job implementing AF in their higher end cameras. I'm guessing today's demands for convenience and nanny-state automatic focusing are pushed by consumers' unwillingness to read owner's manuals and to practice technique until it becomes second nature. Easier to blame everything on a camera's AF system I guess. 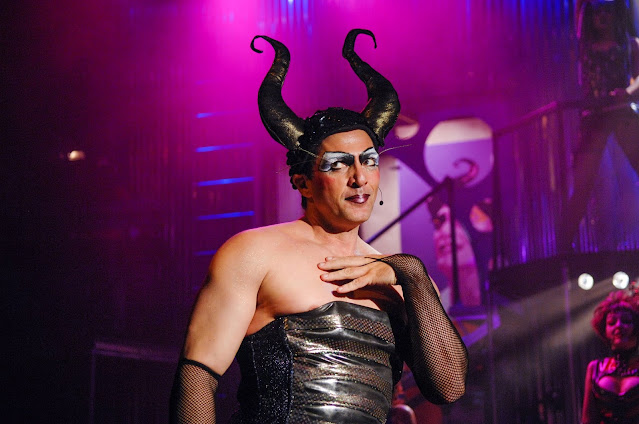 Joe York.
The actor showcased in both images is the late, Joe York. He was a legend in Austin and New York theater circles and one of the kindest and sweetest people I've met in my decades of photography. I consider it one of life's rewards that I was able to photograph him in a number of great performances while he worked in Austin.

I loved photographing in the Kleberg Theater. It's a smaller space and during rehearsals I could walk right up to the edge of the stage to photograph. It made the images feel so much more intimate than making images in a larger auditorium, with a very separated space between the audience and the stage. Things get better = bigger, nicer space for an audience. Things get worse= in a bigger venue you lose the intimacy. That's just the way compromise works...

A few notes about the D2X. I was frightened to ever use the camera above ISO 800 and felt, at the time, that even 640 was a stretch. Now I don't care about noise in an image as much, as long as it's some monochromatic luminance noise and not the sparkly color sprinkles of chromatic noise.

The camera body itself was very luxe, with a nice, clean finder image, lots of well thought out physical controls and absolutely great battery life. At some point in 2017 I got nostalgic for that camera and bought one again for less than $400. When I bought the first one brand new it was a bit over $5000. From the point of view of an investor in actual machinery I'd say it was a disastrous investment. As a maker of images for licensing and sale I would say that it was a shrewd investment that returned many, many times its purchase price over the course of two or three years. Two very different ways to look at buying and using cameras....