And you thought Leica cameras were expensive?! Also, congratulations!!! We hit the 5,000th published blog post with this entry. 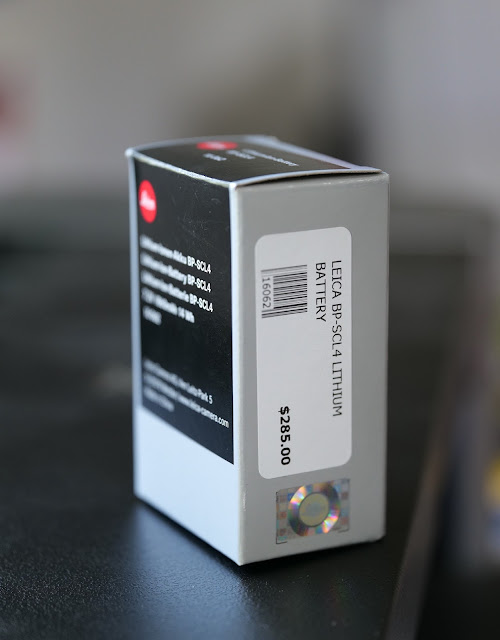 I am always amazed at what Leica can get away with. And how I am taken in by it all too! I bought an SL2 on a whim and then I bought a used (but wonderful) SL as a back-up. I use the back-up about 80% of the time because I like the feel of it a bit better but the one thing I don't like about the SL is that when you use it with AF lenses from Sigma or Panasonic (L-Mount) it drains batteries pretty quickly. Using image stabilization on an I.S. equipped, non-Leica lens speeds up the battery drain even more. My philosophy with cameras and batteries (especially when using battery hungry cameras) is to have three batteries per camera body. That way, if you are using the camera as your primary photography tool on a day long commercial job you'll hardly ever be in danger of running out of electric juice. When I bought the SL2 I added two extra batteries to the already outrageous invoice.
But when I bought the SL I found out that batteries for the two cameras were suddenly in short supply. Apparently the SL2S was selling much quicker, and in greater quantity, than Leica anticipated and the batteries had to go there first. I really wanted one extra battery to pair with the SL but I had to wait patiently. Or impatiently; I don't do patience very well....
I had orders in at three dealers but I finally got a text from our local guys at Precision Camera (not a sponsor) and was told they were holding a brand new Leica BP-SCL4 Lithium Battery for me. I spilled out the change jar on the floor in the studio and started counting out the cash. It's best to start with the half dollars and quarters and work your way down to the nickels and dimes. I'm not sure they'll ever appreciate the pennies at the store.
I counted out $275 for the battery. That's what I paid for one a few months ago. But when I got to the store I was sad to find out that the batteries had gone up in price to $285. It was touch and go but I had some change in my swim bag, out in the car. But in all seriousness, $285 for a single camera battery is just highway robbery. And the painful part is that I'd just bought a couple of generic batteries for the Fuji X100Vs, along with a dual charger, for the whopping "big" price of $27. And I have every expectation that the Wasabi Power generics will last just as long and work just as well.
But, of course, Leica made the battery with "special" features, like an interlock and a rubber gasket to seal it in the bottom of the camera --- for ease of exchange on the one hand and for weatherproofing on the other. I doubt, given the smaller production quantity of the Leicas whether we will ever have a generic battery to compete with their proprietary battery scam. But, if you are dumb enough to buy a current Leica I guess you've willingly invited yourself in for the whole treatment. I'm beginning to feel like this is some sort of karmic penalty for something, I'm just not sure what.
I also bought a charger, on David Farkas's (Leica Store Miami --- also not a sponsor) recommendation which charges the Leica battery and can be powered by PD Anker Power Banks. It was only $50 and works very well. Everything else feels like such a bargain now.
The 5,000th post. I'm celebrating the completion of a goal. I've pounded out well over 5,000 posts but I've only been counting the ones that are currently on the site. It would feel like cheating to take credit for blog posts that have been taken down because they became obsolete or served a short time purpose and didn't need to hang around. The blog has had nearly  28,000,000 direct page views and over 100,000,000 direct, referred and linked-to page views. I've fielded over 70,000 comments (some real stinkers in the bunch) and currently about 55,000 comments are resident here. It's taken a lot of time and energy but it's always fun and, I think important, to follow through on goals you have set.
Thanks for reading along.
Posted by Kirk Tuck, Photographer/Writer at 15:50 36 comments:

This was a portrait done on assignment. It was also done on the first day that my kid drove a car. 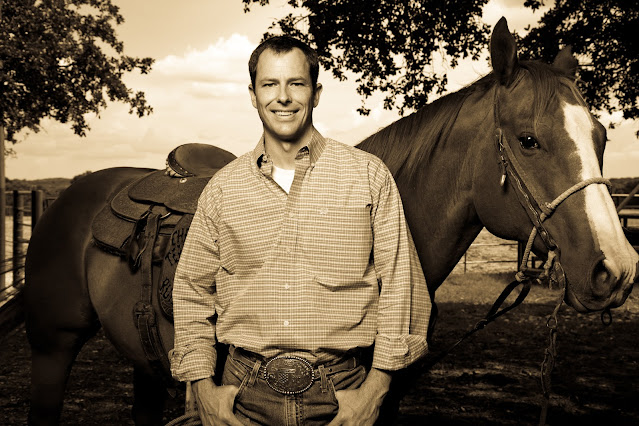 Dr. Cunningham practices oral surgery in Austin, Texas. He's also a rancher. When the marketing people at his practice planned out their advertising one year they wanted to show each of their doctors doing what they enjoyed doing in their spare time. Dr. C. rides horses competitively. And he's very good at it. So we decided to photograph him with one of his horses, out on the family ranch.

I was between assistants then and my kiddo was off from high school for the Summer break. I enlisted him to drive out Southwest of town, to the ranch, and assist me on the project. He was happy to help out. I guess he would have been 15 years old at the time.

We loaded up the boxy, silver and black, Honda Element with photo gear and headed out.

To do the photograph I set up a battery powered strobe in a big soft box. It was a Profoto Acute 600B. I positioned Dr. C. in front of the horse and we made a bunch of photographs. The one's that ended up being used were in color. At the time I thought I'd enjoy this retro look and so I added some sepia filtration to the mix. I've always liked the portrait because it seems so....Texan.

The ranch was pretty big and had nicely paved, private roads so I asked if it would be okay to let my son, with his learner's permit,  practice driving around a bit. The boy was extremely cautious but finally got the hang of it. We had a blast slowly cruising by big cows and nice horses. Goats were less cooperative...

This photograph is a nice reminder for me of a day spent doing what I like best; making portraits and hanging out with family. 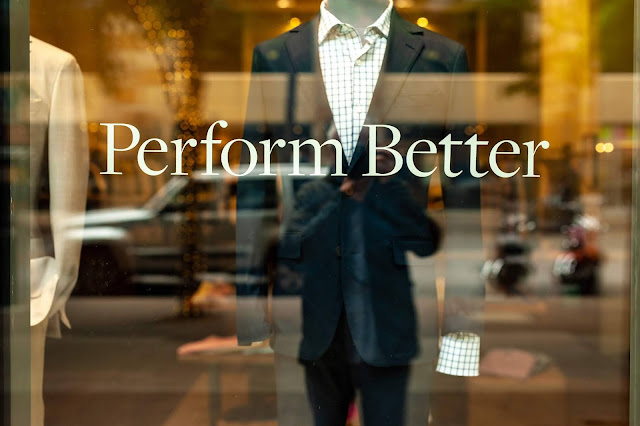 It's interesting that some people regard the human existence as being rather mechanical. Waking up is like throwing a switch. Eating breakfast is just the re-fueling of an engine. Performance is consistent. Sleep on demand. Worried? Just hit the "stop worrying" switch.

As you could probably tell I was out of sorts yesterday. Why else spend an entire blog talking about bad dreams and anxiety? I wish I could tell you that my anxiety abated the moment someone told me to "stop worrying" but the day just got worse. I had to go to the dentist and have two very, very old fillings replaced. I think the original ones were done with an amalgam of spent uranium, lead and mercury. They looked awful.

But the problem with dental improvements (the white, pristine and carefully color matched composite replacements look great and my smile is now incredible...) is that I have an extreme fear of the whole process of numbing the area of the work with injections of Lidocaine, or whatever they use now. While my blood pressure is usually something like 115/70 when I went, with hands shaking, into the dentist's office the assistant took my blood pressure, which is routine for them. The reading was something like 160/90!!!

After the injection the rest of the procedure was a piece of cake. I really like my new dentist and think she's an artist. Also, she gives the most pain free injections I've ever experienced (and God knows I've had some really painful ones in the past). So, rationally I should have had no fear and no trepidation about the visit. But that's not the way non-machine people's minds work. Not at all.

I always have some sort of mild physical reaction to pain blocking medications. I feel tired and out of sorts afterwards. And yesterday, through the afternoon and evening, was no different. I just felt off.

This morning I headed to the pool and still had some residual anxiety from the day before. It's harder to swim will if you are already on edge. I swam so much slower today than I did on Friday or Saturday or Sunday of last week. It was harder to catch my breath. I lagged a bit behind.

And, in a way, my experiences in the last 24 hours were like an analogy for the blog. I liked the images I posted over the weekend which some people took exception to. I know they didn't like the juxtaposition between the image and the caption of overweight people walking into a bar. I know I shouldn't care about critics. But it's one of those personality defects that goes along with being self-directed and having a distinct point of view.

I love the trigger word, "disappointed." It was invented so parents could shame and embarrass their kids but more indirectly than just saying, "what you did was morally or ethically  wrong and must be fixed." It's more dismissive. It's on the road toward contempt. Had someone couched their difference of opinion with my image and caption selection in a different way I might have had a different reaction. But by taking the role of a parent and expressing "disappointment" the commenters were working a deeper agenda. And that attitude of greater knowledge, and the presumption of standing more firmly on the moral high ground sucks.

The human engine here at VSL is running rough this week. Must be the low octane fuel. I'll try to opt for some premium fuel and see if that helps the system. Making big life decisions (career change? retirement? full contact martial arts? jackets with leather patches on the elbows? More fiber?) is always anxiety provoking so bear with me.

A good lesson to learn about clients.... 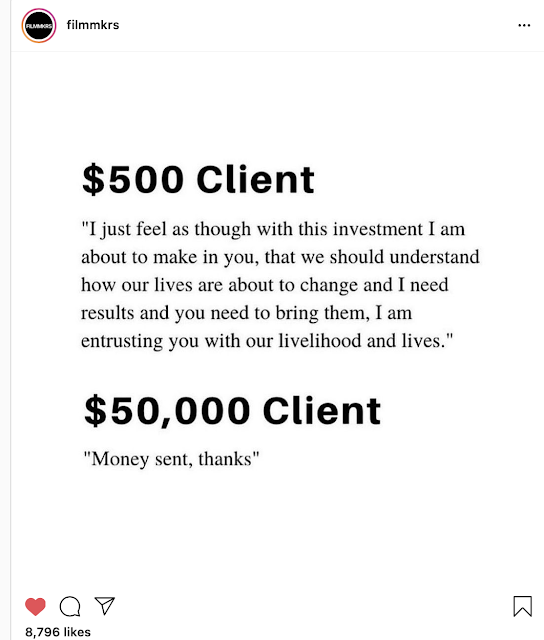 I came across this on Instagram a while back and it resonated with me so much that I took a screen shot and added it to my little collection of business insights. I've experienced a thousand variations of this example over the years. It's why I no longer contractually agree to archive any image for any client. If you save everything and create a precedent by always bailing out clients who can't keep their hands on their assets you will eventually have to go digging through mountains of past work to find a tiny, old file for a "budget-oriented" client from twelve years ago. And they will expect it for free....
When a client tells me they only have a fraction of the budget a good photograph should cost I'm resolute about declining the "opportunity" to spend a lot of time for very little reward.
If you find this cruel or insulting please go away.
Posted by Kirk Tuck, Photographer/Writer at 11:00 3 comments: