I think we've hit an inflection point and now the way a camera feels in your hands or how easy the menu is to navigate will start to take precedence over more arcane, technical specs. 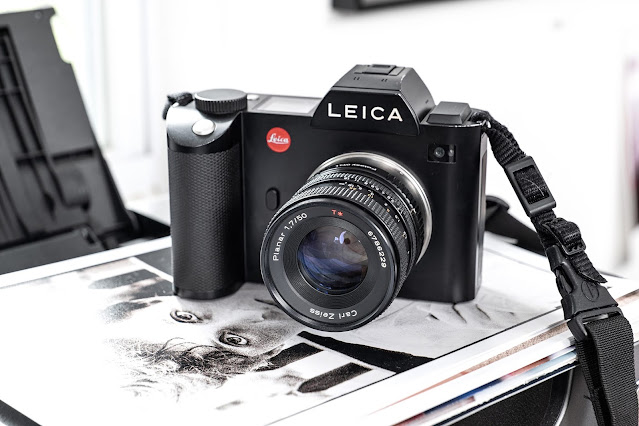 Everyone is so different when it comes to selecting appliances and tools for daily use. Some like to find the best "bargain" which generally means getting a product with as many "features" as possible but at the lowest price. Others select products based on how much pleasure actually using them will be and how well suited they are to doing just one task really well. I've bought cameras every which way and usually more emotionally than logically.

When we all started with digital photography the tech inside the cameras was analogous to the tech under the hood of a 1960's Chevy Biscayne; an inexpensive family sedan with no great claim to either speed or high workmanship. Oh, the exteriors of the cameras were fine since the digi-guts were usually housed in a body that evolved from decades of trial and error in handling and design originally done for film cameras.

In the last twenty years we've gone from the clunky Biscayne to the svelte (but still utilitarian) Toyota Camry on the insides of our cameras but we've also gone through a process of making the exteriors less elegant; perhaps less expensive to make. And only a few camera makers have innovated well when it comes to menus and interface issues. Too many cameras have too many buttons and the buttons, which should at least help in the fluid operation of the cameras, are too often bundled together with horribly complex and labyrinth-like menus that bridge us not to better images but face-to-face with the monsters of ragged complexity.

I'm of the belief that, for most users (professional and amateur) that the technical guts of cameras since 2013 have gone past the point of sufficiency and are now, largely, interchangeable from brand to brand, and highly capable. I'm hopeful that instead of finding new ways to provide unneeded, increased resolution, faster frame to frame shooting speeds, and more panorama and toy camera modes, camera makers will settle down and figure out how to make their wonder-tools more pleasant to hold, more comfortable to use, and less arduous to set up.

If you are buying a camera today because you feel the "need" to "upgrade" from 40-something megapixels to 60-something megapixels, and that's your sole parameter driving you desire, I'll have to mark you as "insane" and wish you good luck. But I would never begrudge your indulgence.

I've been playing with Leica cameras now for several months and I'm amazed at how they have successfully reduced the complexity and proliferation of exterior buttons while at the same time dramatically improving how the menus work and how one navigates around the menu interface.

While there is a lot to like about various Leica products I think it's the attention to handling, comfort and the advantage of having to do less "busy work" with the menus and the cameras themselves that convinces buyers to select them; even though the technical prowess of the camera bodies themselves is not better or worse than similar products at much lower prices.

But I can't think that a good menu requires enabled cameras to only be offered at the luxe end o the scale. There's no imaginable reason other camera companies can't simplify and make their own menus more welcoming and logical. They'd just have to ditch some of the minimally useful, endless configurations they offer and understand that less complexity rather than more is welcome by most consumers.

And, if you design for less complexity you force people to make fewer unnecessary decisions and give them a better feeling of mastery.

I don't pretend I know the minds of all the different kinds of photographers working out in the new world but if I were to design a camera I'd concentrate on usability issues over spec sheet stuffing every time.

Is there a real reason to have ISO delineated in third of a stop increments? Would full stop settings work just as well? Is it essential to have an endless selection of AF modes? Why not just the three biggies? MF, S-AF and C-AF? Who really needs lizard face recognition? Or donkey face recognition? Do we need endless Jpeg image profiles?

Judging by forums all over the web the vast majority of serious photographers only shoot Raw. What use is it to them to have dynamic range modes, Jpeg color profile settings, and the ability to tweak every setting for contrast, saturation, noise performance, sharpness, and tone? Aren't these all things that can be preset in a PhotoShop or Lightroom menu?

I can only imagine if the marketing and design teams of popular camera companies designed the wooden apple boxes we use on sets... They'd be made from carbon fiber, have cup holders, be electronically tagged for continuous inventorying, have micro-adjusting steppers on the four corners so the boxes can be automatically level on rough ground, have the electronics to provide a wifi hotspot and be available in 20 or 30 different colors.

And, can you imagine what the same crew would do with the task of designing a new tripod? Would it make cappuccinos? Would one leg contain rescue flares and another be a GPS module? And, of course, every feeble landscape photographer would need to be able to add magnetic levitation to the package for easier carrying.

No wonder new cameras cost so much. There are five or more devices embedded in them trying to be relevant.

Makes me long for the Canon TX camera of my youth. So simple that I'm not sure photographers who grew up in the digital age could understand how to use it....