One day hard. One day easy. 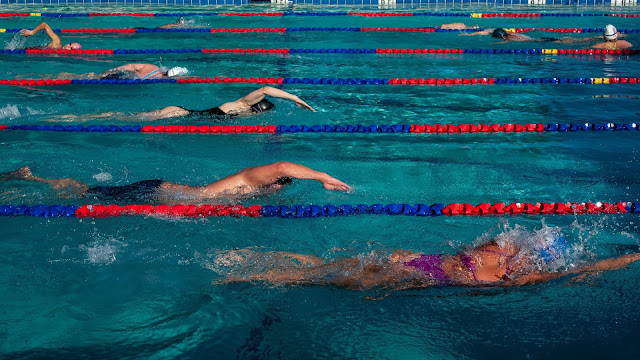 We're totally back to normal at the pool. Everyone who swims on our masters team has been fully vaccinated. The (nice, warm) showers and locker room are now available again. We still keep an attendance sheet just in case we have to notify swimmers of anything cogent to their specific workout time, but we're back at 100% functionality. It's great. Another chunk of life that's starting to feel normal.

Yesterday was a tough workout. A lot of tight intervals and fast sprints. Today was a recovery day. Sets of 100s on mild intervals and lots of stroke mechanics work. I finally feel, after nearly 15 months, that my level of fitness and my attention to technique is back where it was before the lockdowns. I haven't really lost much; swim-wise. At 65 years of age that realization comes as a relief.

I've noticed a good pattern that one of newer, younger coaches (just a couple years out of the UT Austin/Eddie Reeves swim program) has been weaving into his workouts. We get a hard day, like yesterday, where we keep our heart rates at an 80-90% level for most of the hour and then leave exhausted. I'll admit, after the hard workout and a photo shoot in the studio, I headed for the quiet and dark guest bedroom and took an hour long nap...

Today we swam less yardage, kept our heart rates at a cruising level and spent more time working on things that don't exhaust us, like the "catch" out in front at the beginning of the stroke, and overall body position (I've been arching my back too much which creates three points of water resistance--- it means I'm looking too far forward while swimming freestyle) and since fast swimming is 70% technique and only 30% fitness it's nice to have time to work on crucial mechanics.

I think that kind of easy/hard/easy approach actually makes us better swimmers than if we just pound out maximum yardage as fast as we can. On hard, anaerobic days, we're pushing our muscles up to certain limits and without a recovery day we just keeping breaking muscle down instead of building up. Having a recovery swim day alternating through the schedule means shaking out the remains of the lactic acid build up and letting muscle repair.

We'll be able to swim the hard days harder if we swim the easy days easier.

I've started to think more about photography in that same way. I might spend a day walking miles and shooting hundreds of frames but it's easy to get stale if you do that too many days in a row. You start looking at the world in a different (more methodical, less whimsical) and less enjoyable way. If I intersperse long, dedicated photowalks with days of reading, writing and general sloth I find that the intense shooting days take on a special character and subjects for photography present themselves more readily and with more energy. It's best to shake off a dogmatic approach and find a more comfortable flow.

I'm sure many of you already think I'm a bit daft for my camera buying, and using, habits so it will come as no surprise to you that I'm having a great time shooting with the Leica SL and that I've just taken delivery on a second one. For a while there were a number of them available on the used market and I was still trying to decide whether I would eventually end up liking the newer model better and give up thinking about getting another SL. But then I spent more time with each camera and the more I work with the SL the more I like it. The SL2 is a great camera in its own right but there is something I really like about the more stark and industrial feel of the earlier model.

When I noticed the supply of good, used SLs declining at all the dealers I trust I thought I'd really regret it if I couldn't find a second body somewhere down the road. My vision for the system is predicated on the way I shot (a lot) in the film days. A body with lens over each shoulder and an extra battery in a pocket. When I'm doing personal projects I love the idea of two absolutely matched camera bodies as the foundation of my gear. Used in tandem matched bodies allow one to become absolutely comfortable and conversant with the camera menus, and there's no fumbling, as there usually is when trying to go between the setups and menus of two different body models or generations. Even from within the same brand.

After a few very successful street sessions I started looking again in earnest for a good second body. I found two at the Leica Store in Miami. One was in very, very good cosmetic shape and came in a box with all the original box treasures. The other was a bit more worn, with little spots of edge wear at the bottom edges, but the finder and rear screen were perfect, and the camera had just come back from Wetzlar, Germany where it had received a full, $370, clean, lube and adjust by the originating factory. It also had a brand new bottom plate. The kicker was a full, one year warranty from Leica. That's the one I went for.

Now, when I head out to San Antonio, or Roswell NM, or out in the Texas wine country, I'll have a matched set of Leica SL cameras for day-to-day shooting, along with an SL2 body with which to shoot video and images that just scream out for super high resolution. And all three of them share the same battery type.

As I've mentioned in the past, for some users it's easy to adjust to using one camera or one type of camera for all their photographic needs. From soup to nuts, from highly personal projects to daily commercial work. My brain seems to be wired a bit differently. I like to have one set of bodies that's more or less dedicated to commercial work (the Panasonic S1 series) and another that's dedicated to my own desire to have a "personal" camera with me at all times. A camera I use for myself instead of in collaboration with a client.

Yesterday was an interesting case in point. I'd set up the studio the night before so I could walk straight in after morning swim practice and be ready to photograph one of the doctors for my compositing project. I thought I might try using one of the Leica SL bodies to shoot this part of the job with. But as I got closer to the doctor's arrival I felt uneasy about my choice and grabbed a Panasonic S1R out of the drawer and started setting up the parameters for shooting in studio with flash. For some reason the S1R just felt right for a "job."

Once the shoot was over and the files had been imported, and then edited, and uploaded to a gallery, I'd completed all the stuff I needed to do for the working shoot and wanted to go out a grab some shots for myself. I pulled the battery in the S1R (they drain over time as they trickle feed the internal, fixed battery that keeps the clock and the memory charged) and stuck them back in the drawer. Then I walked over to the desk and grabbed the most recently acquired SL body, stuck a 50mm lens on the front and headed to the car.

It all felt logical to me. And I guess that's what really matters. It's nice to have two discrete systems that can effortlessly share lenses. I can pick the cameras that correspond to my way of looking at why I'm shooting.

When I pack for a paying event shoot I almost always pack the same core inventory: It's two camera bodies and the 24-70mm  and 70-200mm zoom lenses. Sure, I might add a few fast primes but I know that the bulk of the work will be done with those two lenses. But those two lenses are the least likely choices for me when I'm going out to walk around and explore with a camera or when I'm shooting environmental portraits for myself. I'm much more likely to have a 70mm or a 90mm lens along with a 28mm and 50mm. It's a different mindset and a different way of dealing with gear logistics.

I'm going out for a walk today and, as usual, I'll only take along one camera body and one lens. The camera will be the SL but the lens is a more eccentric choice for me. I'm only taking the Sigma 70mm macro Art series lens. It's a good sized lens for the SL body and about as sharp as anyone could ever desire. But it's not one I've used a lot so today is a "break-in" day. I'll take a cue from my swim coach and make this a leisurely day for photography. No need to come home with anything great. It's great if I come home with anything at all.

I've promised myself that I'll spend at least one more week power using the two SLs and then write a long and detailed blog post about why I'm so enamored with a six year old camera model which "features" so much less than I can get in a new camera from any one of a half dozen different brands. So, if that's of interest to you then stay tuned in.

My adventure now is turning to getting out and going places. It's good to finally shake off the isolation and geographic constraints and re-embrace the good life.

Thanks for coming along for the ride.