Back at work. It seems both calm and productive. The structure is nice after a year of floating freely... 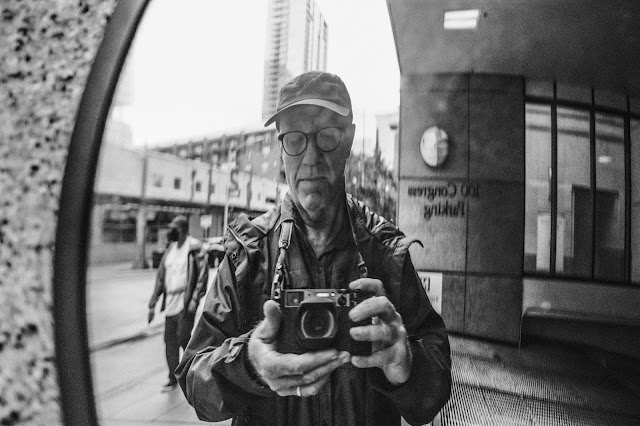 I've been shooting more of the stuff I like lately. Mostly environmental portraits of business people and entrepreneurs. My workflow hasn't changed much in the last couple of years. I drag around two portable Godox AD 200 electronic flashes, the "camera of the day" and a flash trigger. I use one light with a small soft box for a back light and a second, light with a bigger modifier for a main light. If we're going to be outside I take along a black, pop up flag and a heavy duty stand so I can block direct sun from the subject.
I get to the location, figure our what kind of background I want and then set up lights. I almost always use a tripod so I can lock everything down and also because it's nice to be able to get everything set up and tested before the subject arrives, and to be able to walk away from the camera to adjust stuff.
On the last couple of jobs I used the Leica SL2 and the newer Sigma 85mm f1.4 Art lens. It's a nice combination. I only wish the Leica allowed one to take smaller sized .DNG raw files. Not every encounter needs 47 megapixels but nearly every job does need the flex of raw.
I've been using the AD200s for quite a long time now (relatively). I wrote about my daily use of them back in the Summer of 2018 when I was traveling all over the east and west coasts photographing environmental portraits for a giant construction/infrastructure company. I try to be careful with the lights and they do travel very well but once in a while I'll underestimate the amount of sandbagging required when the breezes pick up and one of the lights will do a dramatic face plant, get destroyed, and I'll scramble to get a replacement shipped in from Amazon or B&H.
The nice thing about working with one camera, one lens and two portable lights is that they are portable enough so I can put everything except light stands in a back pack, lash the tripod to the same backpack and hike in for while in case we've chosen a location that's not accessible by road. I recently did a photograph for an entrepreneur who loves to hike through the greenbelt that runs through south Austin. We hiked in about two miles to get to the spot at which he wanted to be photographed. It was an easy enough hike and the gear was light enough to even make some stream crossing non-eventful.
After I photograph a project I tend to be a creature of unbending habits. I head back to the office, toss the gear to one side, grab the memory card and ingest into Lightroom. I've been a vicious editor lately. I recently edited down a take of 120 images to 10. But they were the only ten I would have wanted to see so I felt justified. I tweaked the raw files, converted them into a folder of Jpegs and then put them up on Smugmug.
The next step is to get a selection from the client and then do the post production on the Raw files.
Today I did some work with the PhotoShop neural filters. I used their face retouching filter. The processing gets done in the cloud and delivered back to your app. The whole process is pretty seamless and take about 90 seconds for a big file. But I will say that the facial retouching stuff is powerful and looks good. It can be a bit overdone but when it comes back to you it comes back as a separate layer and you can pull down the opacity of that layer kind of like how you fade a filter in P.S. I liked the final look with the correction opacity at somewhere around 38%. Kind of weird. Kind of fun.
We deliver final images in three file formats. A smaller Jpeg for web use and quick review, a Tiff files because, for some reason some designers still want Tiff files, and a 16 bit layered .PSD file so the D.I.Y. art directors can ruin whatever nuanced touches I've made to the files.
Then we bill and move on to the next thing. So simple. So fun.
Nothing much seems to have changed between the start of the pandemic and the re-opening this Spring. At least not as far as the photography is concerned. I have added about 10% to all our prices because it's getting more and more expensive to do stuff right. But that's just business.
Posted by Kirk Tuck, Photographer/Writer at 19:12 5 comments: